A Week With Friends on the Cape

On Friday, 8/25 we upanchored and headed a short 10 miles into the Boston Harbor to tie up at a slip at Constitution Marina.  This is a repeat stop for us since it is a great marina in a good location.  We had two priorities for this stop.  One was to pick up our weekend cruising guests, Lynn and Rich who were on their way via commuter bus from Cape Cod.  And the other was to have dinner with my nephew, Matt and his fiancé, Lindsay.  Just as we were getting our lines set, a friendly boater walked by with a welcoming greeting.  Oddly enough, this marina has 110 livaboard cruisers who use their boats as home all year long in Boston.  Sounds cold and dreary to me but apparently they have a great little community and love boat life even when it snows!!  My new friend was on her way to the grocery so off I went with her while Al finished settling the boat.  I love how our needs find ways to be met so easily!
All went smoothly with preparing for and meeting our guests and with a local recommendation for a good Italian restaurant in Boston's North End, we headed out for a delicious but noisy dinner Friday night.  Turns out it was the beginning of a big Italian festival weekend!  Thus the noisy dinner! 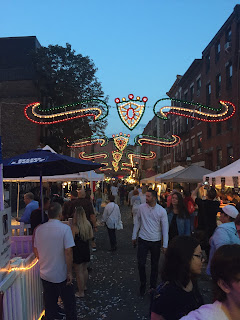 The streets were packed, the traffic was crazy and it was good we had a reservation for our dinner!  But the food was authentic and tastey. 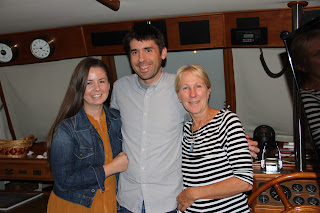 We walked back to the boat so Lindsay could have a tour and to have some time when we could actually hear each other speak! Matt looks a lot like my brother in law, Peter, who is his dad but he has some height from the Johnson side of our family!
Saturday Lynn and Rich enjoyed their first time to wake up in a gently rocking boat to a blue sky day and to top it off, it was Rich's birthday.  We enjoyed a walk up Bunker Hill to scout out a Whole Foods Store to find some special birthday breakfast food and had a leisurely morning on the fly bridge with the view of the USS Constitution. 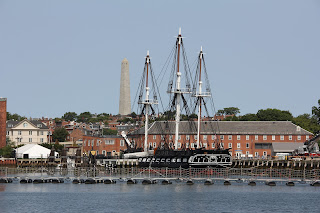 The USS Constitution is a Navy frigate built in 1797.  And, no we have stayed next to it twice now and never took a tour; perhaps we will next time in Boston.  We took off late morning for the inaugural cruise for Lynn and Rich on InSpeyered 2 to traverse the Massachusetts Bay to the Cape Cod Bay.  Luckily we had Lynn on board with her good camera and  picture taking skills to document  the trip!  (Lynn was the photographer who captured the whale pictures a month ago). 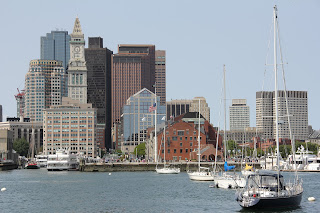 Boston Harbor is busy on a Saturday and very picturesque on a sunny day. 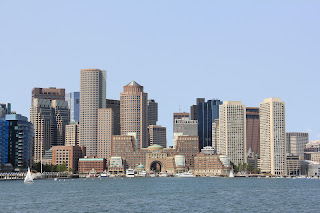 Dead center in this picture, is Rowes Warf, known as the gateway to Boston. 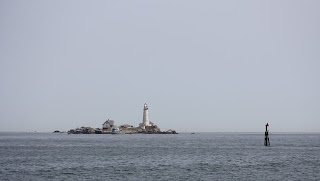 Note the light is on atop the Boston Lighthouse!  Lynn took bunches of pictures while I counted to 10  so we could follow the 10 second intervals that the light cycled on. This is the oldest lighthouse in the US, built in 1716 on Little Brewster Island.  Note our calm seas allowing us to traverse 26 miles to Scituate, Mass in comfort. 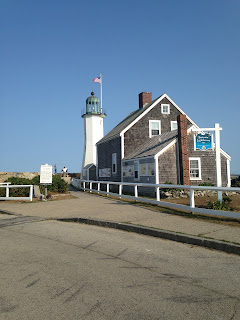 Once we picked up our mooring for the night we hailed the launch and went to shore for exercise and to pick up the 2.5 lbs of fresh scallops for the birthday dinner that were on order from a local fish market.  I walked to the Scituate Lighthouse that is now a private residence. 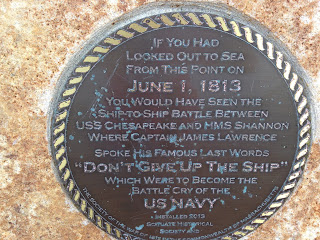 This plaque was on a break wall at the lighthouse.  Enlarge the photo so you can read the inscription. Still learning something new most days on our travels. 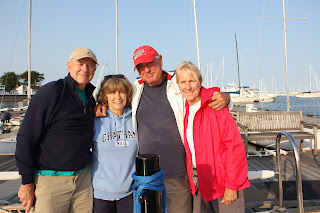 Happy Birthday to Rich!  It was a most pleasant day and the best dinner was about to be cooked! It was a quiet night in the harbor but unfortunately Lynn and Rich, had to listen to the occasional bump of the bow against the mooring ball.  Always different sounds on a boat and disconcerting when it is a new experience! 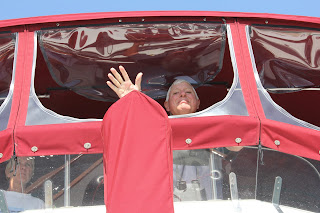 But Sunday dawned as another blue sky day with calm seas.  We got going and released the mooring for a 50 mile cruise to the Cape Cod Canal.  The Captain was happy again to be burning some diesel and traveling on our boat!  The canal is a popular spot for locals and tourists to enjoy the walking/biking paths along the waterway and Lynn and Rich have done just that.  So the cruise into the canal was a special treat for them. 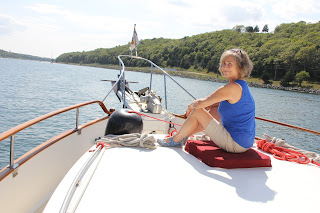 Always fun to see a place from the water that you have only seen from land. 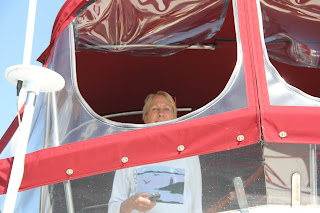 I gave Al a rest and Mr. Auto and I drove the boat together along the canal.  Note the remote in my hand; it is almost like cheating to drive with a remote control! 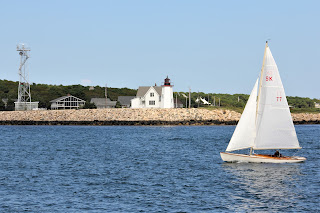 Out of the canal, we turned to port to head to Kingman Marina just off Buzzard's Bay.  To the far left of this photo is a traffic light that controls boat traffic for vessels over 65ft through the canal.  The Wings Neck Lighthouse also in the picture is no loger active.  We took a mooring for the rest of the week at Kingman to enjoy some land based time with Lynn and Rich. 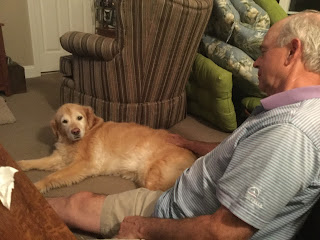 While there, we also got some dog loving time with Gracie!  She requested a mention in the blog! One reason for the longer stay on land was Al's last (we hope) visit to Miami for an eye recheck.  Good news is that the retina is attached and healed.  Minor bad news is his chronic dry eyes have lead to a tiny rough spot on his cornea that needs extra moistizing eye drops and a future recheck with a corneal specialist.  But we focus on the good news.  In the mean time, I enjoyed time on the Cape! 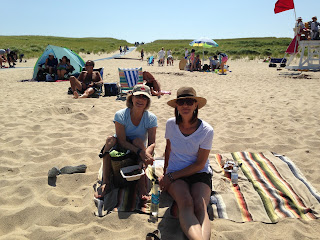 A special treat midweek was the arrival of our friend, Peggy, another college friend and fellow Europe traveler when we were all quite young in 1976! The 3 girls went to Provincetown for some beach time and a visit into town.  The beach was well attended but alas, no one could swim because there were lots of seals which draw in sharks.  So it was a red flag beach day.  That was fine with me because the water was a "toasty" 60+ degrees!! 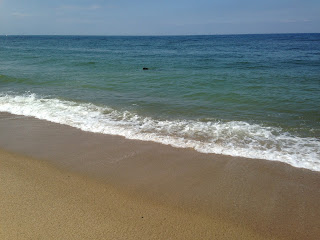 We watched the seals float and dive but getting a picture was tough.  This was the best I could do with my phone since Lynn was without her camera.  Beautiful water view at the end of the Cape! 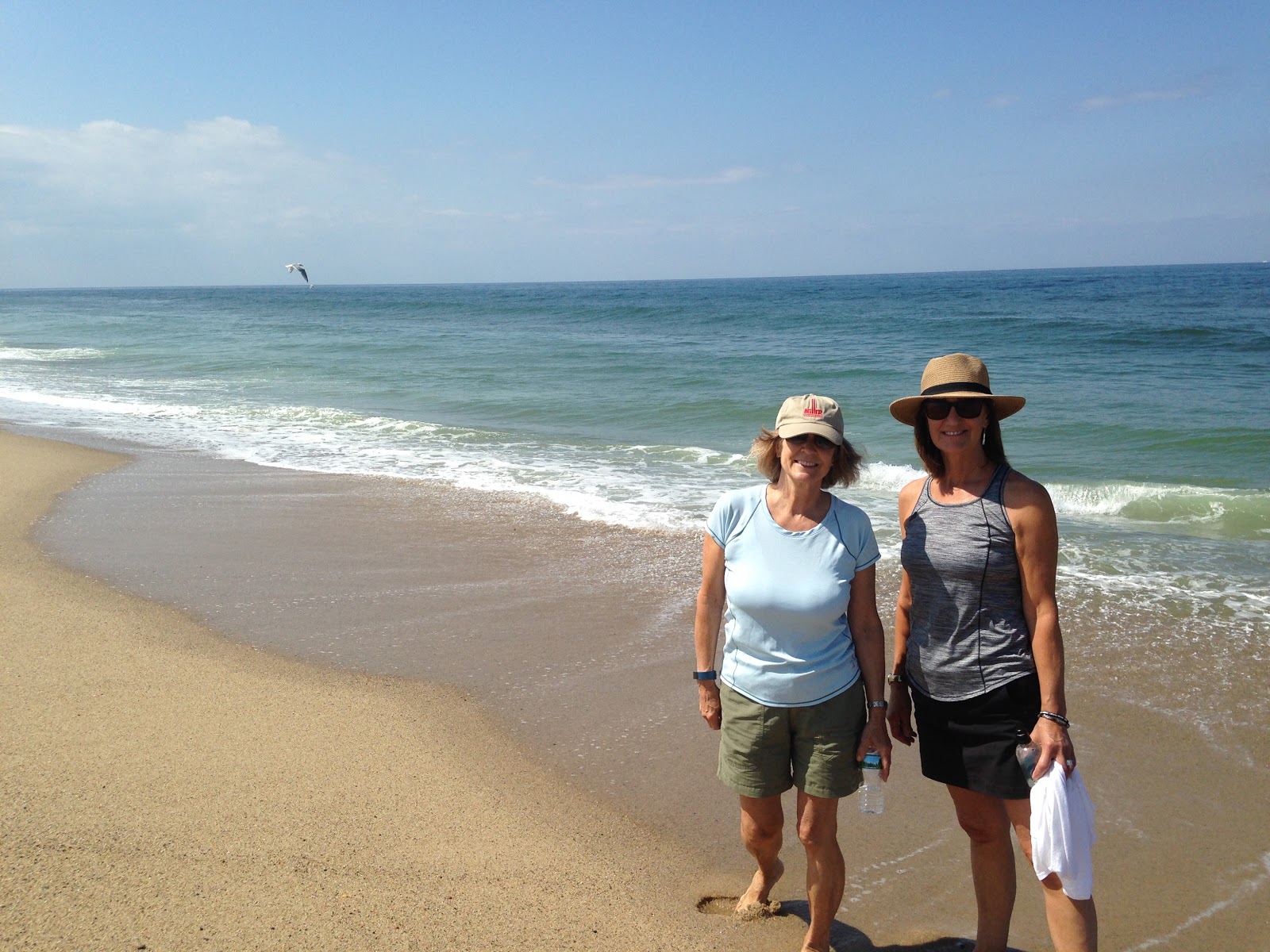 We had a nice walk for a bit of exercise. 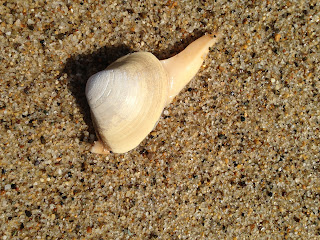 Along the way, I watched and shot pictures of this quahog clam using its tail to inch along the beach toward the water. 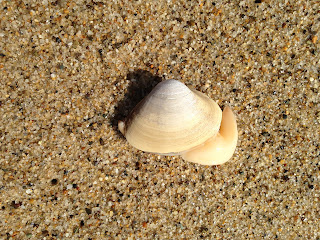 It would curl its tail to swivel and twist along.  I eventually picked it up and put it into the surf to end    its long journey to the sea! 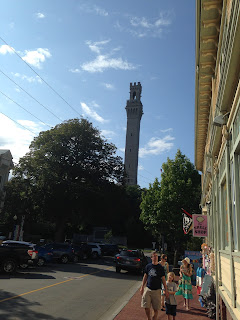 This is the Pilgrims Monument to honor the first landing of the Pilgrims on the Cape before they continued on to Plymouth.  I don't remember that in the history book we studied in school many moons ago but guess that is the fact. 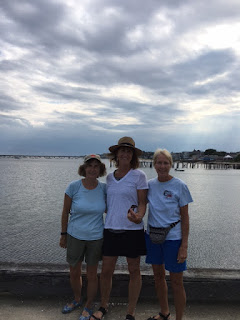 So we girls had a fun day in "P" town and then drove the length of the Cape to visit the boat.  Peggy has not seen our boat so we wanted to have docktails on the fly bridge. 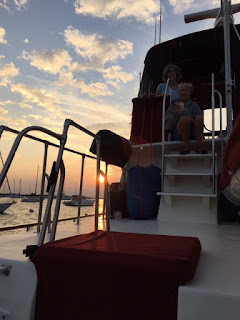 It was a lovely sunset to share with old (not aged just long term) friends! 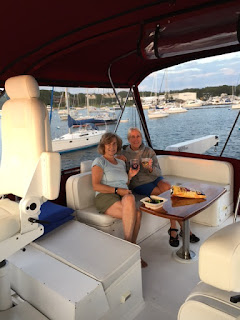 We have toasted many occasions together over our 40+ years of friendship! 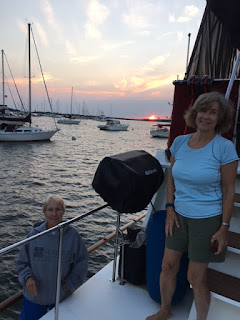 Peggy has an artistic eye for photography since she is accomplished artist!! 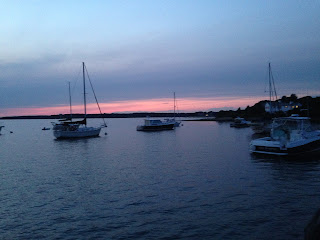 Tomorrow we provision the boat and figure out the next part of this journey.  But we end the night with a beautiful sunset.