Another Rogue Wave Slows us Down

It sure is good that we walked 2 miles on South Bimini Island to find the wishing well that commemorates the Fountain of Youth discovered by Juan Ponce de Leon because it seems to have given Al youthful recovery. 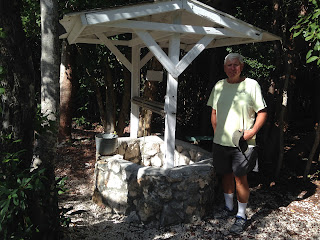 And it sure was good that we decided that both of us should cross back over from Bimini to Florida so I could be present at the 1 month recheck after the oil bubble was removed from Al's eye. 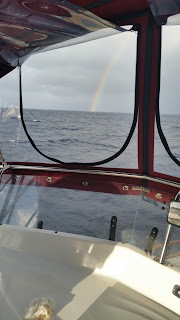 We spotted several beautiful rainbows during that crossing.
And lastly it sure was a good idea to head to Stuart to get the teak work started since Stuart is fairly close to Miami. 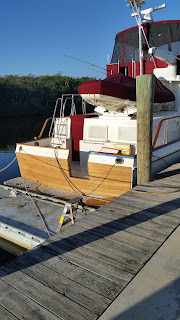 Because we got kinda bad news that we didn't expect at that one month recheck two weeks ago.  Al had sprung a leak; he had a small area of fluid building behind the retina causing an area of detachment so the doctor concluded that he had a microscopic hole in his retina.  Several options were reviewed and Al chose the "fix it now" approach so he had a third surgery on 1/17 to drain the fluid and laser over the area where the hole was suspected to be plus more laser over the entire retinal periphery to firm up the attachment. We were back in Miami yesterday for the 1 week recheck and so far all is good and the retina is nice and flat and healing again!  But Al is grumpy because there are lots of boat chores to attend to and he is very restricted in what he can do.  Which is  basically sit and read and take walks!  But we have enjoyed a fun social life having boating and land based friends in the area. 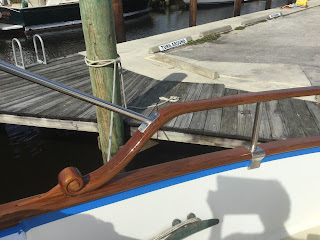 And our teak is starting to shine like she is brand new! 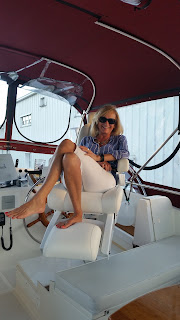 We had a fun visit from our friend from Hendersonville, Marie Sigalito, who just happened to be renting a condo in Vero Beach to avoid the winter weather. She is testing the comfort of Al's captain chair in its reclined position. 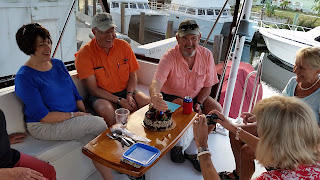 And we had a fun gathering of folks from Greek's Folly, Short Vacation and Mara Beel (new friends) to attend the Stuart boat show followed by a Birthday party for Tom, our Greek Birthday Boy! And we failed to get pictures of a great visit with Al's college roommate, Randy and his wife Nancy over the first weekend here. We spent a day with Ginny and Gene on Free to B visiting Jensen Beach and enjoyed lunch at our new favorite restaurant and visited an interesting Refuge museum where we again failed to take pictures!  BTW a Refuge house was a place along the Florida shoreline where victims of ship wrecks were taken in and cared for way back before the US Coast Guard was founded.
So Al is healing and our plan (if we dare to make one) is to return to Miami for the one month check up on 2/22 and then hopefully find a weather window to cross back over to the Bahamas to explore the Abaco Islands.  And in the mean time, our boat gets lots of work done and we continue to enjoy a busy social life.  Things could be worse so we count our blessings!!

What Were We Thinking?

If you follow our boat around the waterways via Vesselfinder or Shipfinder, you will know that InSpeyered 2 is sitting along a wall in Stuart, Fl.  How crazy are we to get all the way to Bimini, also known as "A Bit of Paradise", suffer through rough waters and then turn around and come back to Florida?   When we landed at Brown's Marina Christmas Eve, I said I would not cross back any time soon and maybe never.  But 10 days later, I found myself sitting on the flybridge watching a storm brewing in the West, directly in our path, making the predicted 1ft waves higher and more frequent and realized that returning to Florida could be a bad idea!!  So what were we thinking to make that decision?  Well the answer is 3 things.  Al has a follow up eye recheck this week in Miami and he could have taken a fast ferry over and left me with the boat in Bimini but the ferry schedule is erratic in January and he would have been gone for 5 days for a one day visit.  Then I went to the local groceries and realized we were poorly stocked for a multiple month stay and shopping in the islands is limited.  And thirdly, the buoy reports were good for a Wednesday crossing so I figured I could handle a quick 50 mile jaunt back to Ft. Lauderdale.  Of course those buoy reports are based on computer modeling and there really aren't actual buoys in 1,000 foot waters so when storms occur they are not predicted nor factored in!  Never the less, we headed out on 1/4/17 before the sun was up to return to Florida. 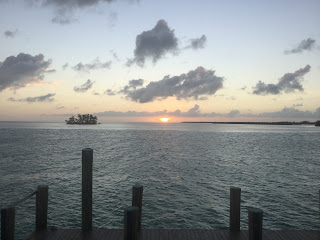 The water and sky was calm with just a light breeze blowing as we untied lines and pulled away from Brown's Marina.  The sun was just making it's appearance to warm the day.  No storm on that horizon but of course that was looking East not West! 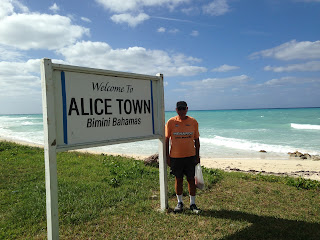 So we chose to leave this gorgeous beach view, 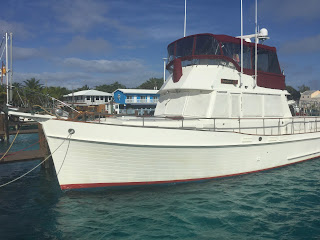 And this friendly little marina to go to this; 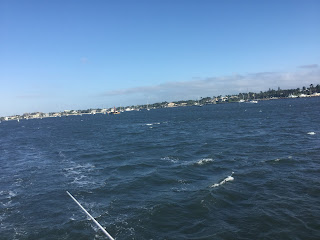 Choppy, cold waters of a Florida anchorage we stayed in 2 nights ago! I wanted to take a picture of the cold but that doesn't work very well.  But on this particular morning (Saturday 1/7) we donned sweats, jackets and gloves before pulling up the anchor because the 20+mph winds were sucking the heat out of us as fast as we could make it!  What were we thinking to leave Bimini? So here's the story of our past week.  We had a few lovely days to relax and swim in Bimini after we saw the guys off on New Year's Day. Oh and do just a bit of cleaning as 4 extra large feet added some sand and grit to the floors! 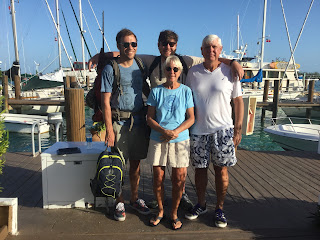 We studied wind and buoy reports and declared Wednesday 1/4 a fine day to cross back over.  We weathered a storm in the crossing but I didn't get sick and the second half of the trip was fairly calm as predicted, landing us in Ft. Lauderdale in only 51/2 hours of travel.  The Gulf Stream current pushed us along this time.  Then we spent a day cleaning the salt off the boat and doing laundry etc. before heading north to Stuart.  Why not back to the Bahamas?  After that Wednesday, the north wind blew in and the Atlantic became a mess and will be that way for a while.  Since typically the weather improves for ocean crossings later in the winter, we decided to have our teak work done now and plan to return to the Bahamas later in February.  And I will end this with the fact that the weather in Bimini is still very windy and "cold" (mid 60's) not beach weather, so it is OK that we crossed back and have time to provision the boat properly this time.  We will be in Stuart for 3-4 weeks for those of you who look for us via internet vessel search.  I guess our thinking wasn't so crazy after all!