Adding IndyCar to the Great Loop-Another Kind of Adventure!

We went backward on our loop to get to St. Petersburg for the first race in the 2016 IndyCar series, parking our InSpeyered 2 among a line of major yachts with staff and catered food!!  We were the odd ball boat to not have a basket for shoes for people invited to come aboard.  We allowed our guests to keep their shoes.  (It is customary to remove shoes when boarding megayachts). 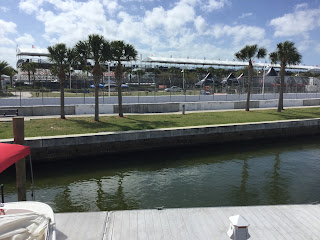 This is the view from the flybridge looking at the strip of grand stands along the front straight where the hot pits and the start/finish line are.  Between the grand stands and our pier was a strip of water and the back straight which is marked by cement blocks that are gray and white.  So if you can understand this description, it should come to mind just how close the cars raced by our boat causing a deafening  whine of engine sounds and a blanket of oily, black dust!  It was both exciting and annoying!!  But since we are race fans, so the excitement took precedence! 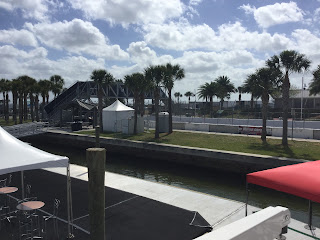 We had the privilege of being in the first slip so next to us was the beer garden and the red topped security area that wanded us just like in an airport before we crossed over to the actual track area.  And that security kept all fans except invited guests off our pier.  Pretty cool!  The bridge is our path to cross over the track when the cars were running. 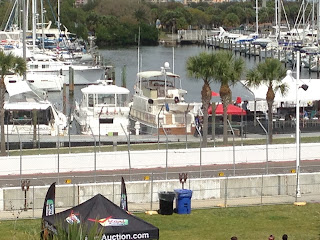 This picture was taken from atop those grand stands where we had passes to the special suite for the race promotor.  InSpeyered 2 sits proudly in slip 1 just to the left of the red canvas. 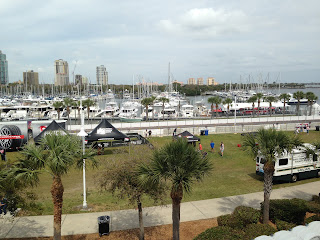 This may give you an idea of what our pier looked like with increasingly longer boats toward the end of the pier. 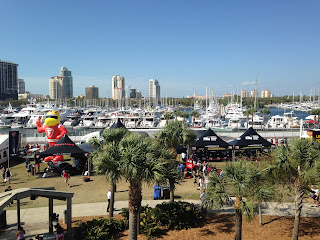 The Firehawk inflatable (bird with helmet dressed in red suit) was Al's idea to have a mascot at races just like at other sports events and has been a unique and awesome addition to the marketing of Firestone tires so I had to include this photo of inflatable Firehawk in front of the yacht pier where our special (smaller) InSpeyered 2 sits. The real mascot was not spotted by me at this race so no picture of the real guy but he will be front and center at the Indy Motor Speedway this May for the 100th running Indy 500! 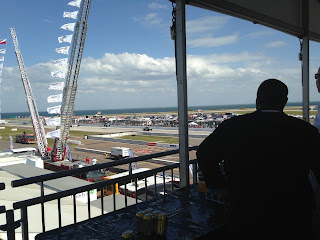 This picture was taken of the Stadium Super Trucks because I like to watch them fly in the air after jumping over barriers.  IndyCar racing is the feature event but a race weekend like this includes many other series races and this was a fun one to watch.  Plus it gives you a perspective of our viewing. 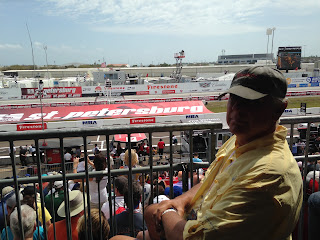 This was taken race day with Al in his boat clothes and all sorts of relaxed, looking down at pit lane and the red Firestone timing stand just below, where he spent a good deal of his time while working races.  So nice to have him up in a suite and enjoying the day rather than working the long days at the races back when we were younger and working stiffs!! 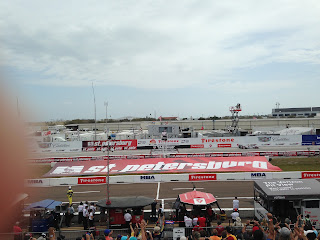 The winner of the IndyCar race passing the finish line under the checkered flag. Not my favorite driver but an exciting race finish.  Another race in the record books.  We then enjoyed a peaceful night with our guests, Ann and Rob before they departed on Monday 3/14.
On an aside: we had a wonderful surprise guest couple on the Thursday before the race visit us for the day.  Jean and Page Mader just happened to be taking a weeks vacation in Ft.Lauderdale and drove up to spend an afternoon and night with us.  Page was a Firestone race tire engineer and Jean was one of the best speech therapists I ever worked with so it was a special day.  More looper magic!
Posted by Jane at 8:38 PM