Starting Our Summer on the Chesapeake Bay

The last blog was our visit through the Dismal Swamp and that brought us to the Elizabeth River past Norfolk, home to a very expansive naval base.  Many of our looper friends have reported being escorted to the edge of the channel by patrol boats to keep cruisers away from varied naval ships going to and coming from naval yards.  Our trip through was uneventful (darn!) 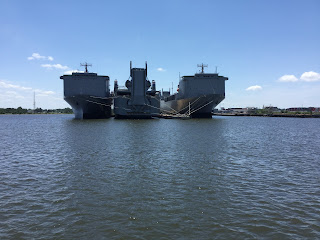 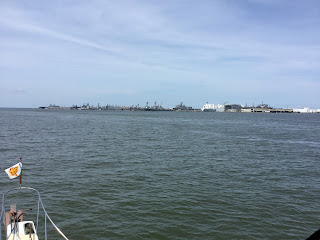 The white hospital ship was particularly inspiring knowing it has been around the world helping when natural disasters have occurred such as the hurricane that leveled Haiti.  We stayed our first night off the Hampton Roads area at the Hampton Public Pier which was just an average marina and a town that didn't draw our attention. So we moved on to the York River to Yorktown and stayed 8 nights to allow time for Al to fly back to Miami for his third eye check up.  He got all good news; retina is smooth and healing well, vision is slightly improved and he returns in 6 weeks to hopefully find out when the oil bubble can be removed from his eye.  So for now, he continues with drops and no time lying on his back (he misses those recliner naps!!) to keep the bubble in place. 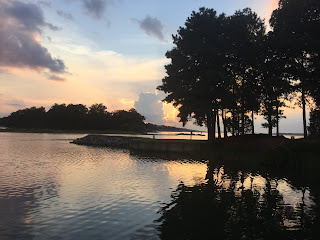 Wormley Marina was very pleasant and quiet with great people around.  Al's college roommate, Dana and his wife Marion were great hosts to us as they live a short distance away in historic Williamsburg  While Al traveled to Miami, I stayed on land at their house and enjoyed a wonderful bed, great shower and homey hospitality!  I did some sight seeing in Williamsburg and we had a car tour of Jamestown, the first colonial settlement, and Yorktown the sight for the winning battle of the Revolutionary War.  But silly me took no pictures of any of those places! And the promise for a great display of fireworks off the York River was cancelled due to lots of rain!  So we watched fireworks on TV! But we had an added treat because when we returned to the boat on Friday, July 1st, we were greeted by 2 looper boats, Greek's Folly who we traveled with in the swamp and their travel friends on Short Vacation.  So we enjoyed a July 4th Mexican restaurant lunch with Dana and Marion and then a cookout later with our boat friends. 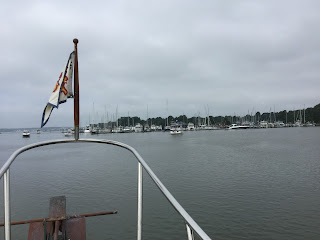 July 5th we made a big crossing of the York River going a total of 4 miles to the other side to anchor in Sarah Creek with our new buddy boats. 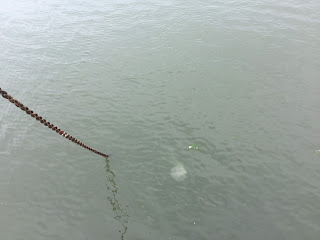 The weather was hot and humid and we couldn't go swimming because these pale white jelly fish known as sea nettles are stingers and surrounded our boats. 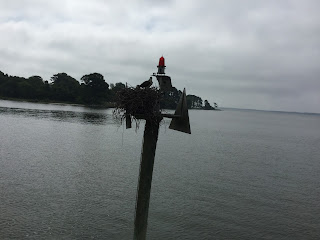 On July 6th (was that just yesterday?) we moved on, passing this Osprey family with twins! The good news is that the seas were calm in the wide open Chesapeake and the bad news was that that meant no wind to keep us cool.  The tiny speck ahead is Greek's Folly leading us through a shallow area. We traveled about 30 miles into Mobjack Bay and the Ware River off the bay to our anchorage in Windmill Cove.  And the great news is.... NOOOOO nettles so we could swim and cool off! 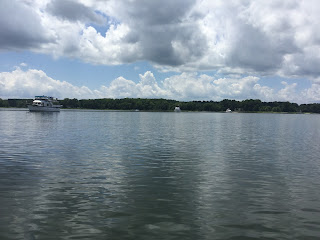 Here we are anchored close enough to gather for"docktails" before dinner last evening. 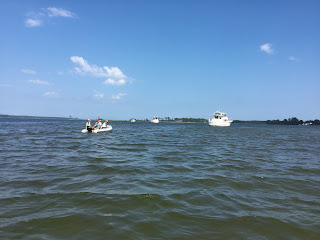 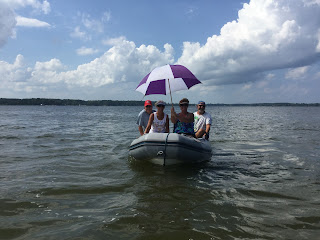 Our buddy boaters enjoying a dingy exploration cruise of the Ware River, blocking the intense sun! 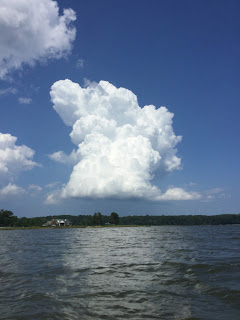 The thunder boomers gathered late in the afternoon giving us much needed cloud cover for docktails and then an intense lightening show with heavy rain during the night.  Today we are moving on by ourselves to try out another anchorage that promises a beach.  More later...