Swinging on a US Navy Mooring Ball!

We continue to do circles all around the Chesapeake Bay but the recent highlight was finding a free mooring ball put into Weems Creek just up the Severn River from Annapolis by the US Navy!  The creek is one of many "hurricane holes" that the Navy uses as a safe harbor for their boats in the event that a major storm is predicted.  So they anchor many mooring balls all around Annapolis and we were lucky to find one unoccupied Sunday afternoon 8/7. 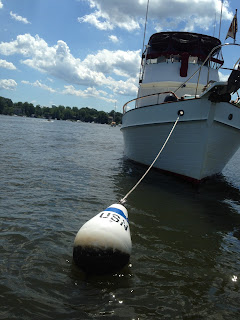 We have had some heavy storms several nights in a row while anchoring and did well with setting our anchor but wouldn't you know, the one night we were on a ball tightly anchored by the Navy, we had no storms and little wind!  But we still felt honored to be held tight by the Navy.  We were close enough to Annapolis to take a bouncy dingy ride into town and take our walk and find a late lunch.  Then on Monday 8/8 we took a short trip to Herrington Harbor Marina on the west shore of the Bay to stay for a week while Al took another trip to Miami for his eye.  We rented a car for the week and returned to Annapolis by car to tour the Naval Accademy. 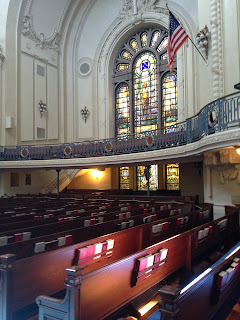 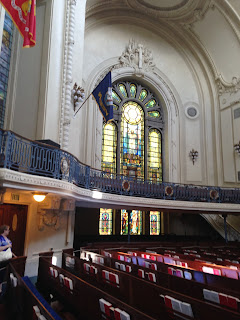 These shots were taken inside the beautiful chapel on the campus.  We took a walking tour in high 90's heat so I only took these two pictures inside.  But then we again went looking for a late lunch and see what Al enjoyed at Chick and Ruth's, a Jewish deli just like you would find in NYC! 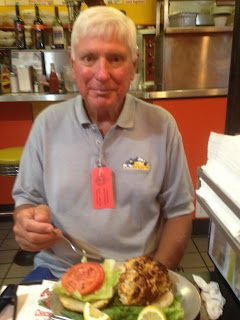 A half pound crab cake on a bun that Al believes is the best so far on this Chesapeake journey.  He is donning his dandy tour tag just to be ornery!  (Despite my plea to take it off for the picture!) 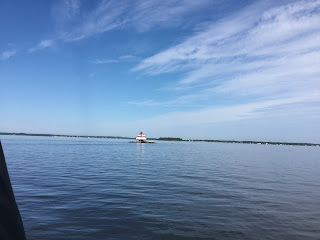 On the way into the Severn River to get to Annapolis Harbor is this historic Thomas Point Shoal Lighthouse that is the only remaining structure that is on pilings screwed into the floor of the bay. 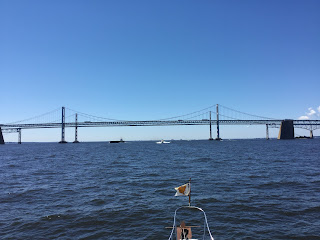 Also on the way to Annapolis we ducked under the massive Chesapeake Bay bridge, spanning  4.3 miles, which connects the more rural eastern shore of the Bay with the cities of Baltimore, Annapolis and Washinton, to name a few of the major cities on the western shore. 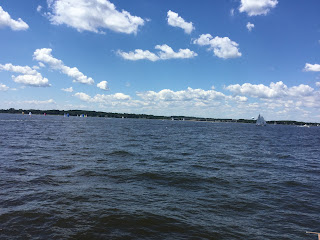 On a Sunday, this is a typical view of the wide open Chesapeake which is the perfect sailing area, thus sailboats far out number us "stink pot" motor boats! 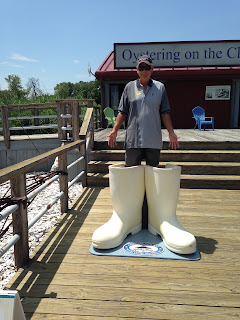 So the last blog written 2 weeks ago (yes I am getting lazy) we had just arrived at St Michaels and here is Al trying on a rather large size of shrimp boots at the Maritime Museum which was a wonderful all inclusive history archive of the Chesapeake from war times to fun vacation times. 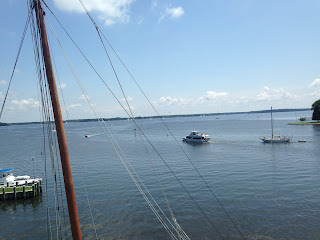 This is a view from the museum's light house on another Sunday afternoon, 7/31 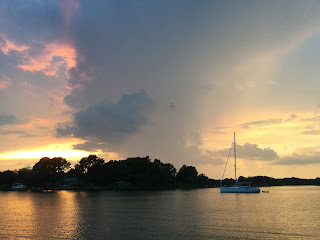 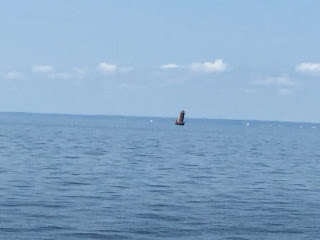 Leaving St. Michaels on Monday 8/1, we passed the Sharps Island Lighthouse which was knocked over 20 degrees in the 1970's from a particularly frozen winter season. 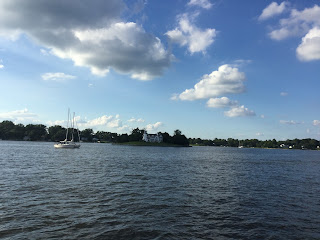 We stopped in the Magothy River near Dobbins Island with this beautiful home sitting on its own tiny island but we found ourselves once more surrounded by the "enemy", the nettles. So Thursday 8/4 we cruised further up the Bay into the northern third to find the nettle free Sassafrass River and settled into Turner Creek for 2 uneventful days and nights. (Except our walk from a Marina near by which lead us to a really cool produce and gourmet market where we scored real Pennsyvanian sticky buns and a home made cherry pie; all is well in our world!) 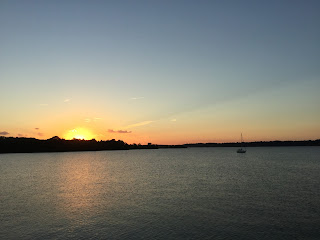 A Turner Creek sunset with nothing but peace and quiet! 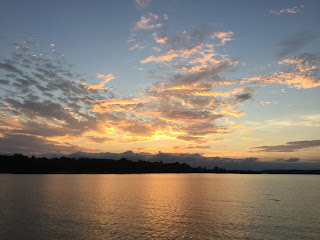 A second Turner creek sunset before heading down to Annapolis where I started this story.
And to add to the record.  Al had an excellent report from his eye recheck, revealing continued healing of the now attached retina and much improved vision.  He returns in 2 months to hopefully hear it is time to remove the oil bubble and then plan for where that much less invasive surgery will occur.