A Rogue Wave Slows Us Down!

So you have heard about a "bump in the road" as a mishap that causes things to change usually in a bad way. Well Al has called our mishap a rogue wave for obvious reasons!  While we were on our Disney/Universal adventure, Al realized that the vision in his left eye was diminished.  He really noticed it when we went from bright sunlight into darker rides.  So when we got home, he called and got in to see an ophthalmologist first thing Monday morning.  He was very quickly diagnosed with a detached retina in the left eye and referred to a surgeon at the Bascom Palmer Eye Institue in Miami for Tuesday (4/12).  He had emergency surgery late in the day that lasted 3 hours and was very successful!  We were back at the boat on Wednesday for him to start the week long recuperation with his head face down 24/7! 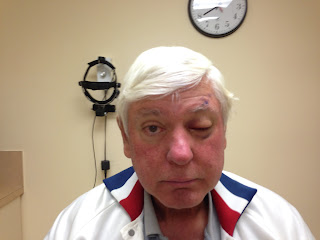 The night after surgery was not a happy time! It was a long day for both of us. It was nice to have those Marriott points to use for a free nights stay at a Springhill Suites near the hospital. 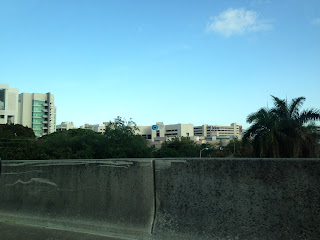 Driving in to Miami, we spot our destination. Note the building with the big blue eye. 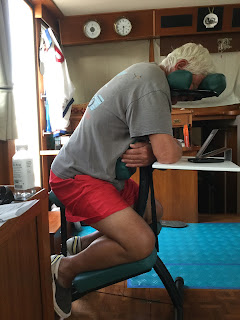 We rented this chair with other pieces that fit under the mattress so Al could be relatively comfortable with his nose pointed to the floor for eight days and nights.  A bubble of oil was inserted in his eye to put pressure against the retina to hold it against the back of the eye.  Keeping his head down allowed gravity to help with the healing process.  We returned to Miami last Wednesday, 4/20 and he received nothing but good news from the surgeon who released him from the face down positioning with cautions to resume light activity.  When we asked what that means, she suggested he could start with cooking and laundry. (What planet is she from?) So we have stayed another week in Stuart waiting for the work to be completed on InSpeyered 2 and allowing Al some more time to rest and heal. 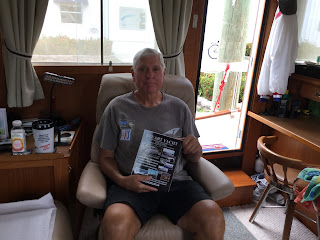 Today he sits upright in his new Stressless Chair, reading about where we will head to tomorrow as we begin our trek northbound to work our way out of the state of Florida!  He is a much happier and better looking guy right now! We are both relieved and grateful that this "rogue wave" hit us near a place like Miami with top notch medical care rather than in the Bahamas where we had planned to go.  It does mean we have to put travel to the Bahamas back on our wish list for another time and it messed up Erik's vacation plans with his girlfriend Mandy to go island hopping with us.  They flew down anyway and enjoyed some time at a Marriot on an island near to us so we had several times to visit and get help from them to do things that Al cannot do.  The next blog will be the happy report of the wonderful changes that have been made to InSpeyered 2 that will surely make the rest of this trip even more pleasurable!!