We left the loop for Indy and had a nice break, but we both felt restless to get back on the move only to find repair and weather issues slowing us down.  So we haven't gone very far!  While in Myrtle Beach we had nice visits and meals with my sister, Carol and her husband Peter.  With their help we got the boat all provisioned and ready to roll. Then weather came in with a big threat of severe winds so we postponed leaving for a few more days, boring!! So finally on Monday, 6/6 we headed out in light wind and some heavier rain but that was easy to tolerate with the new canvas. 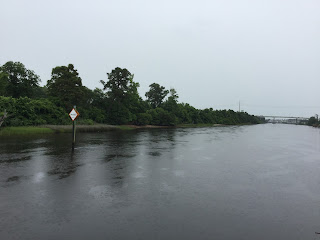 We ran through an area called the rock pile which is lined by a rocky ledge that is hidden by water so signs along the way warn of danger.  It really was not a threat unless we meandered out of the channel so we had no difficulties.  We nestled ourselves into a lovely anchorage near a barrier island with the plan to walk the beach in the morning.  So we watched it rain and enjoyed the peace.  But gradually the wind increased and after checking our weather online sites, we did something we have never done before.  We pulled anchor at 6:30pm and zipped back up to the ICW, headed back south where we knew there were marinas and tied up to a dock way after their business hours to be in a safe place.  Of course, the weather really didn't get all that bad and we missed out on a nice anchorage. Oh well, better to be safe! 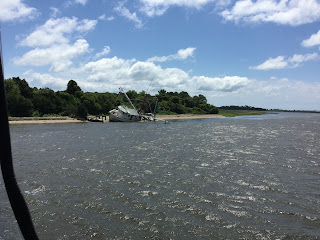 But the next day we passed this beached fishing boat and it sent goose pimples along my arms thinking about the mad dash we made the night before to get out of the wind!  This boat has been there for some time so really was not related to our storm situation.  We cruised on north to the lovely town of Southport and found a free dock at a local restaurant for the price of a burger.  Free docks don't typically have electric hookups so we turned on the generator to charge the batteries only to find it started well but didn't produce power.  So to make this story short, we called a local repair place, had the problem diagnosed, ordered the expensive part, found after installation that the problem was not corrected and eventually discovered the part was faulty so a second replacement was needed.  This all took 10 days so here we sit in Southport!  Of course our free dock was only for one night so we have been tied up at Indigo Plantation Marina which is quiet and quite nice. 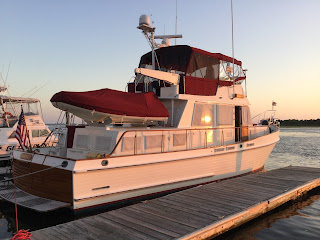 This is our free dock where the saga began. While waiting for the part to be shipped, we took the new dingy (which we love!!) across the wide inlet of Cape Fear to Bald Head Island, home of the Cape Fear light house called Old Baldy. 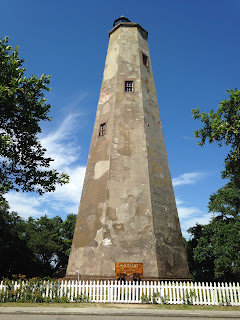 This is no longer a functioning light house but is a great museum where we read about all the ship wrecks that gave the name "Fear" to the Cape.  There is a 22 mile area off the coast with shallow water and rocks that nabbed many boats during storms back in the day before navigation became so much easier with electronics.  We climbed her 124 steps to the top and this is what we saw: 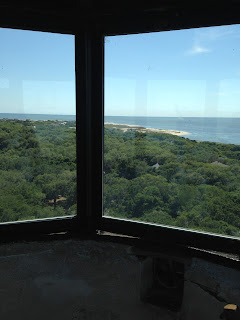 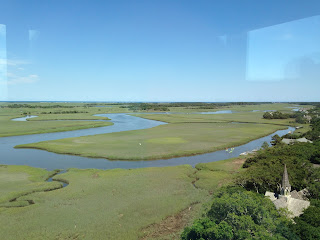 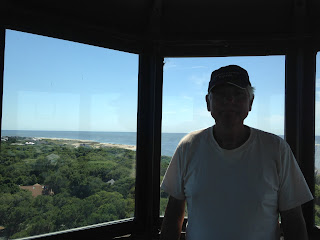 Then we walked the beautiful, nearly deserted beach and had a cooling off swim. 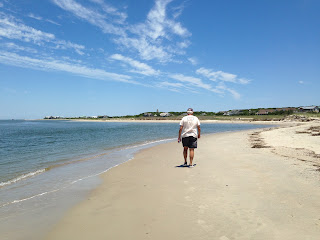 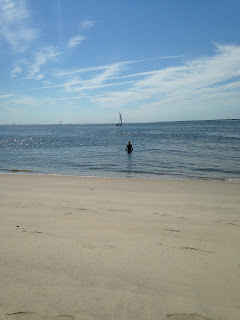 We don't seem to take good pictures in the historic of towns we visit, but we never miss a photo opp on yet another beach!  To end the story, our repair was completed this past Thursday 6/16 too late in the day to leave.  And then we found a wind storm coming our way for Saturday 6/18 so decided to stay yet another 3 nights to play it safe.  So here we sit in Southport with the plan to leave early tomorrow for a long cruise making some headway North!  But we have had an added bonus.  We acquired boating neighbors a few days ago so have new friends whom we have enjoyed meeting.  They are a couple from Germany who brought their 41' sailboat over the Atlanic 7 years ago and have cruised 6 months of every year since in many varied places in the Carribean and other waters south.  Now they are making their way up to the Chesapeake as we are, so perhaps we will bump along and meet up periodically in the months to come.