Going to Indiannapolis for a week in a Mariott while looping is kinda cheating but this year's race was #100.  We went to the 100th anniversary in 2011 while Al was still working the race so we needed to complete the race circle with the 100th running.  For those of you who may not know, The 500 was not raced during war years due to tire shortages and other considerations.  We had a wonderful week meeting up with loads of old friends all amazed at how relaxed Al looked with a nice tan and casual clothes.  His look of concern and his starched white uniform shirts are gone and the boating look predominates. 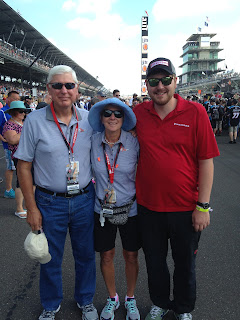 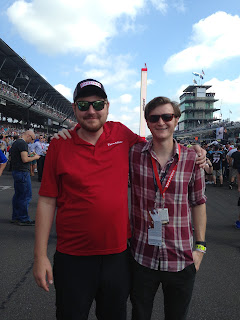 Our tradition is to walk the track before the race begins to see the cars up close and try and identify famous people.  But we only saw the cars and many folks working the race that knew Al well in his old life.  Erik had his buddy Danny Lusk as his guest for the weekend. 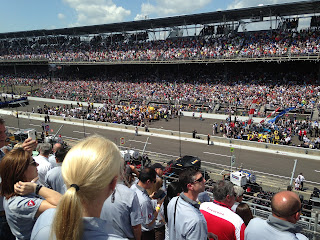 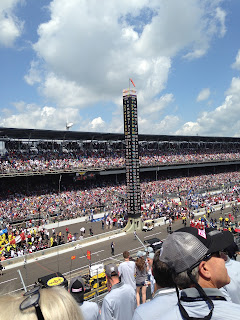 The prerace crowds on the track were as big as ever for this sold out event.  The new pylon was directly in front of our seats listing the starting grid.  Our seats over looked the beginning of pit lane giving us a great view of some of the front running cars when they pitted for fuel and tires. 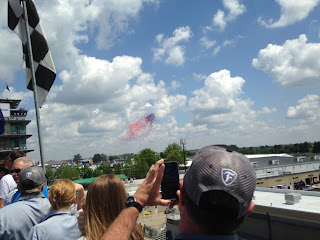 The biodegradeable balloons are set free just before the drivers hear the famous words "lady and gentlemen start your engines" and the air is filled with the roar of 33 high performance engines! 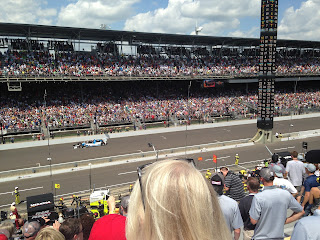 Mario leads off in his two seater car with none other than Lady Gaga in the second seat. 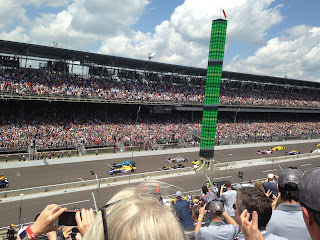 The race goes green and the cars zoom by in uneven rows of 3 abreast.  We made the race more interesting by setting up a wager between 6 of us.  For $50 we each picked 4 drivers and the top 2 finishers out of the 4 were given a number based on the finishing position and then added.  I had the lowest number of 10 so won the $250 pot!! And all were surprised since I picked them based on who I liked by personality!  They all have skills and hot cars!! It was a great race with lots of lead changes and the winner was a rookie driver to the Indy track so was not easily predicted.  All in all we had a fun day only to go back to the hotel to watch the race again on TV, tape delayed so we could better follow the action and what the commentators said. 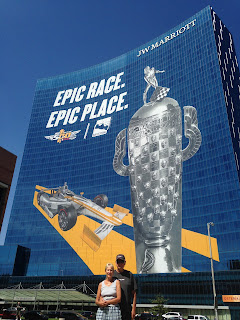 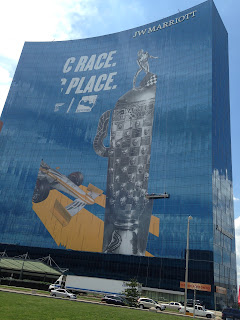 The J.W. Marriott was dressed up for the month and the day after the awards banquet, she was slowly  "undressed" with the plastic sheeting removed piece by piece. Now we are back in Myrtle Beach and happily aboard InSpeyered 2, ready to continue our travels north.