Happy Travelers on the Hudson!

Note: this blog was started in September when we were actually on the Hudson but two things got in the way and now it is almost Halloween.  First, the keypad that makes blogging on an iPad tolerable, died a sudden death and it was too difficult to get it replaced and second, my neck became painful and more so every time I looked down. That made any typing just too painful.  Happy end to that story; saw a physical therapist in upstate NY and she fixed my bulging disc!  So now we are home, I am pain free, we have fast internet and I have access to a real laptop!  Now back to the blog on the Hudson! Pretend it is September when reading this so it makes some sense! 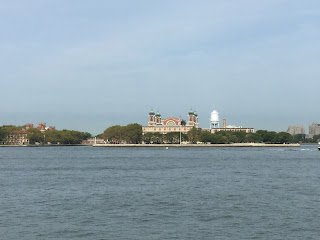 But first we had to pass along the west side of NYC and to our port was Ellis Island. 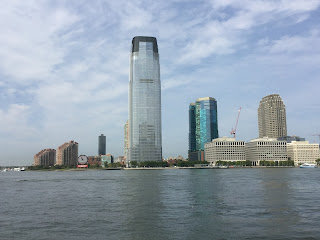 Also to port was Jersey City with the Colgate Clock (marking the spot where the Colgate/Palmolive headquarters used to be) and the tall Goldman-Sachs building.  The clock is 50' in diameter! 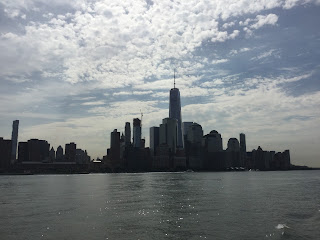 Then on past the west side of the battery with another shot of One World Trade Center. 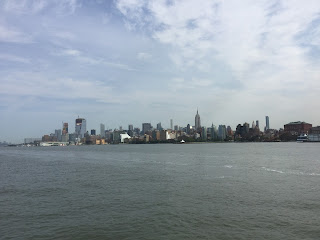 Further on, we passed the Empire State Building, standing tall amongst other sky scrapers. 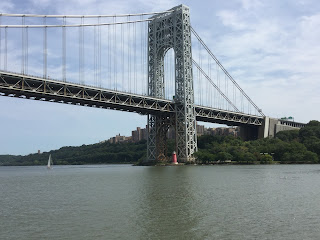 Then under the George Washington Bridge where "The Little Red Lighthouse" sits.  This is another one of those bridges that Al and I have crossed by car as kids and young adults, having grown up near NYC. 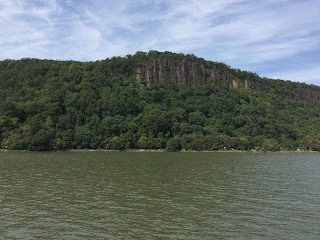 Once out of the Manhattan area the New Jersey side became quite beautiful with the Palisades Interstate Park.  Lovely rock cliffs and just a hint of Fall's color changes beginning. I think somewhere up in that forest is my old girl scout camp! 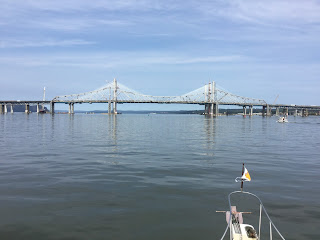 This is our approach to the Tappan Z bridge that I drove across to and from college for 4 years.  Got my first speeding ticket very close to the bridge!  Fond memories! The Tappan Z is in the final stages of construction of an entirely new bridge so what we saw was a double bridge. Our day ended at Shady Harbor Marina in Croton on the Hudson after about 40 miles of travel in a bit over 4 hours.  We picked this stop based on looper friends' recommendations as a good place to rent a car to do some sight seeing.  So on Wednesday 9/13 we did just that and headed to West Point for a tour. 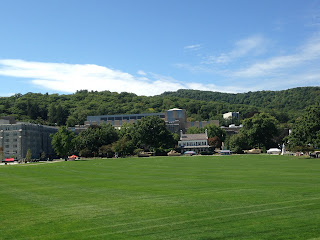 This is a very beautiful old campus and this particular view is of the home of the Superintendent (white house in the center of picture).  It was interesting to learn that the campus can only be seen by tourists via bus tours where as we were able to walk all over the Naval Academy unchaperoned. Guess the Army demands more security after 9/11. 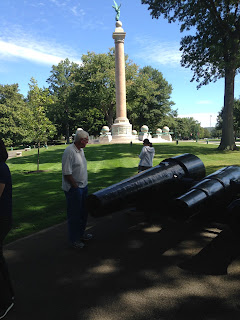 Al is inspecting cannons captured during the Civil War. 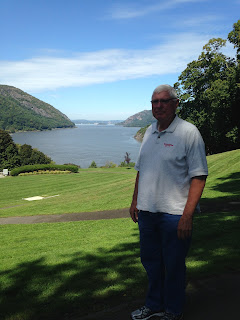 They refer to this spot as "the million dollar view" both because it is stunning and also because Benedict Arnold sold the plans for West Point to the British for apparently what would be valued at a million dollars in the present currency. Looking north, the waterway behind Al is the Hudson where we will be again tomorrow. 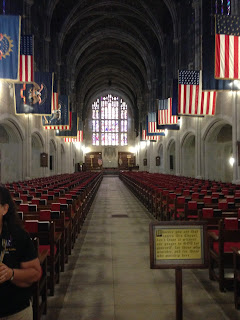 We went inside the Cadet Chapel.  Note how the Bibles and hymnals are all in precise order and placement.   The West Point motto is Duty, Honor, Country and the campus spoke to that motto. We then scooted out of West Point and drove on northward to Poughkeepsie to tour the Culinary Institute of America but first we had to dine in the campus run Brew House for a late lunch. 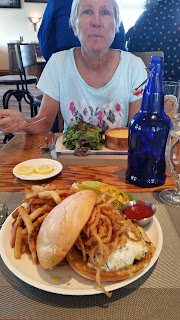 Such fine cuisine and wonderful service!  We were effectively "lab rats" because each of the 5 restaurants on campus is really a classroom for students to learn the fine art of preparing the food and  serving the food with a professor surreptitiously following around to teach and likely give grades!  But we had a most delicious lunch and really enjoyed the experience. 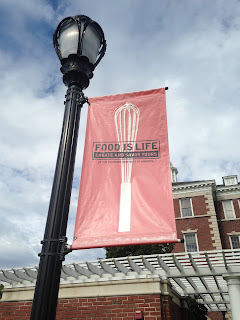 The tour was fun as well, seeing all the varied kitchens full of students and delicious cuisine and deserts! 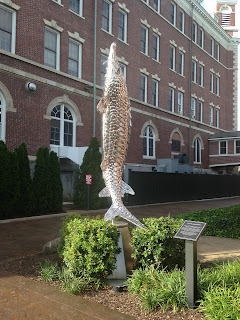 This is a work of art on campus that is a Sturgeon fish made from real silverware and represents the most abundant fish from the Hudson. 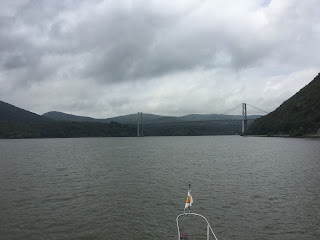 We started going north again on Thursday 9/14 on a mixed weather day.  Here we are heading toward the Bear Mountain Bridge with heavy cloud cover.  Al has camped on Bear Mountain with his family as a kid. 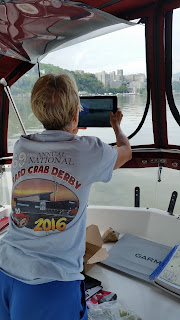 Al decided to take a "record shot" of me taking pictures of West Point for this blog! 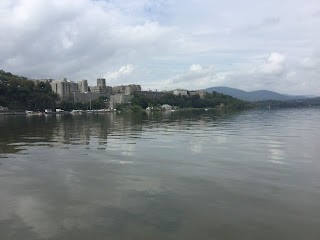 And voila, the picture I took!  West Point is a real fortress from the waterside. 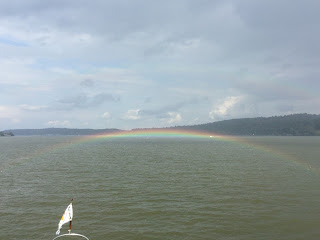 As the sky cleared partly and the sun came out from behind clouds, it began to rain lightly, creating this amazing horizontal rainbow!  Another first for us to see such an unusual sight! 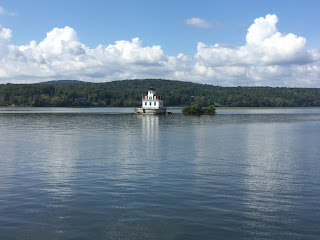 The day became bright and clear as we passed the Esopus Meadows Lighthouse.  Soon after, we stopped for a two night stay at Poughkeepsie Yacht Club which is the home port for Fleetwing, owned by "Poughkeepsie Bob 423" and his wife Ann who we befriended months ago in St. Augustine, Fl.  They graciously loaned us their car to go into town so Al could have his left eye checked for some corneal scratches.  It helps to have friends along the way. Poor Al must wear a pressure patch over the eye for some hours each day but he is coping well!
After a nice visit with old friends, we moved on further north a short distance to Kingston Municipal Marina because Al wanted to see the Hudson River Maritime Museum.  It turned out to be a very small but informative museum about the river's history.  We learned that folks back in the mid 1800's and early 1900's enjoyed day trips all the way to NYC on fast steamboat ferries.  So they could travel round trip the distance that has taken us 3 travel days! 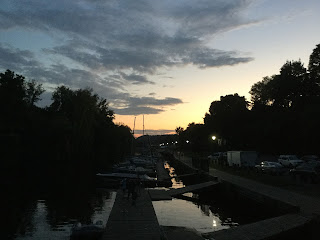 After a fine early dinner at the local Mexican restaurant, we enjoyed another lovely sunset and quiet night.  On Sunday we moved on north with the destination of Shady Harbor Marina but on the way, we had a very special treat.  A very good friend, Peggy Loeffler, who is a flight instructor extraordinaire in Western Connecticut, texted that she would be taking a student over the Hudson and would find us and take photos of us from the air! 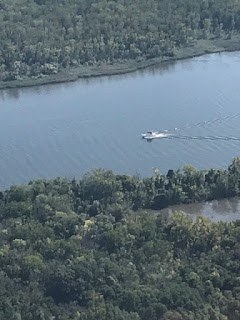 So here we are cruising along in what looks like a very tiny boat! 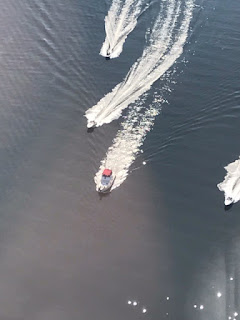 Cruising along with Sunday traffic of wave runners and runabouts! 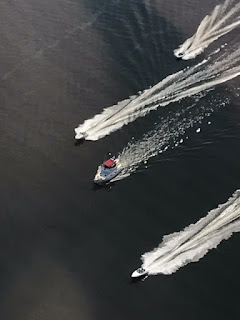 Such cool shots of us cruising along, thanks Peg! 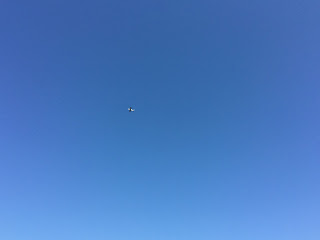 And then the "great" shot I took from our bow of Peggy flying overhead in a two seater plane!  Expand the photo if you want to be sure that speck is really an airplane! 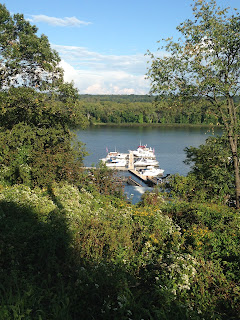 InSpeyered 2 sits quietly along the T-head dock at Shady Harbor while I take my daily walk along country roads.  We will miss the Hudson River because tomorrow we take a left into the Erie Canal. 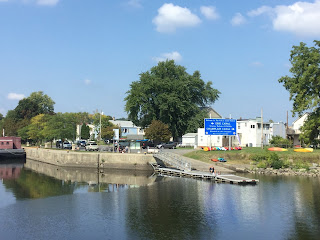 And here we are at the juncture of the Hudson River and the beginning of the Erie Canal in Waterford, NY.  The wall ahead provides free overnight dockage with a mere $10 fee for electricity. We spent just one afternoon and night at this stop to load up on groceries and meet our "hurricane" friends from the boat Free to B.  We had a great visit and dinner with Ginny and Gene who we originally met just before Hurricane Matthew last year.
Now on to the last leg of our adventure for this year along the Erie Canal to Winter Harbor where our water home will wait out the cold season until next Spring.