Spring has sprung and we are back on InSpeyered 2, our water home.  Time at the “dirt house” was well spent but we are happy to be back on the water.  Al had a successful hip replacement and did a fine job of steadily following his rehab plan. 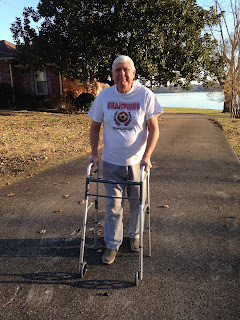 The Captain was walking the area around the house on the day after surgery! When he wasn’t doing exercises, he was creating cool stuff for the boat while dreaming about driving the boat and “burning diesel”.
My gift was a specially made tool for lassoing tall marina pilings. Later there will be pictures when it’s put to use.  For his own pleasure, he created a telescoping pole that can support a special solar powered anchor light but also can double as a pole on the bow raised to match the boat air draft so we know in advance if we’ll clear low bridges. 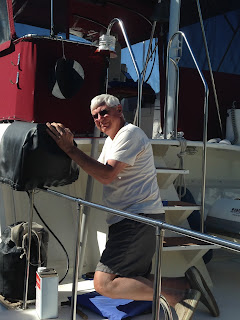 The cleverness of the Captain is never ending!  My home time was focused on spending “therapy” time with the family of 3 girls who each have Joubert Syndrome which makes coordination of movements  a challenge among other things.  I love the time with “my girls” and being a part of their progression towards independence is special.  But the water travel called!!
So we departed the home port and headed to  Brewerton, NY just before Memorial weekend stopping for a 4 day weekend in Indianapolis for the 102nd running of the Indy 500.  It was a great family weekend because we had Erik with us and a very special guest, Al’s sister. 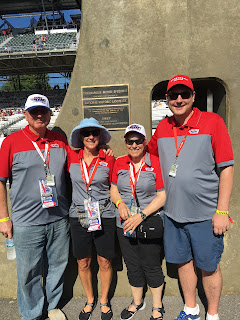 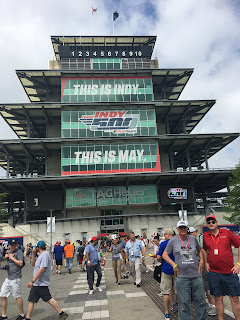 It is amazing how much Al and Erik look alike and even stand with the same posture!
From Indy, we continued north to Canton, Ohio to spend 2 nights with my first boss and dear friend, Barb and her husband Marty.  Since they live on a lake, we got our first taste of returning to boating while enjoying time on their pontoon and teaching them some things about lines and proper tie ups! 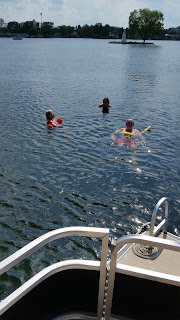 We had a fine day to float in Lake Cable off the pontoon boat.

We made it to Brewerton on 5/30 where InSpeyered 2 spent the winter and she was “splashed” the next morning so we could board right away.  And the best part was that there were no major surprises like awful bugs or other critters and she was even fairly clean, at least inside!  But that was 2 weeks ago and we have only moved less than a mile to Brewerton Boatyard where we have been dealing with tons of boat chores and boat fixes!  The first of which was getting a replacement teak swim platform installed that was made over the winter, and she is a beauty. 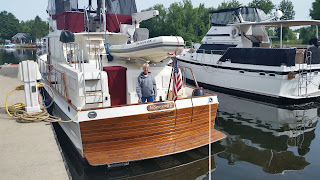 After a few coats of teak oil (on the First Mate’s chore list), the swim platform looked as beautiful as the teak transome.  Al’s chore list included checking all of our fire extinguishers because Kidde has a major recall in process and of course all 5 extinguishers need to be replaced. 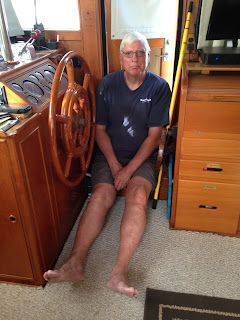 It is a tight squeeze for Al to get down to check the extinguisher next
to the lower helm and getting back up was no easy matter!  Plus his chagrin includes figuring out how to set up shipment of new extinguishers that may be shipped 2-3 (or so) weeks after ordering.  When traveling, that in itself will be a major challenge.  Next on the boatyard list was installing switches to simplify shifting from shore power to inverter power.  This job was started last fall and the plan was to finish up in a day or so after arriving this May but the guy who was to make a plan and buy the switches is having family medical problems so is not working at the yard this summer.  And when he tried to ship the plans and the switches bought for the job, good ol’ UPS lost the shipment.  So that added nearly a week to our stay at the boatyard while new switches were special ordered.  Luckily we were content with beautiful sunsets and quality time with our boat buddies on Short Vacation. 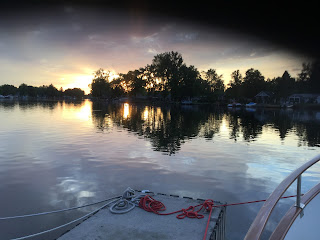 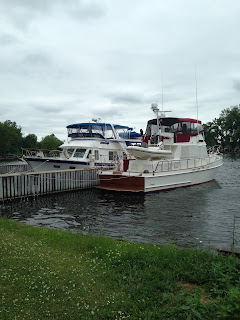 We shared some meals, some snacks at docktail time and shared plenty of boat advice over the 2 weeks spent next to each other in the yard. 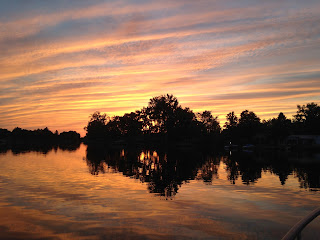 Variable cloud cover and cool nights made for excellent sunsets! And that is all great fun, but we seem to get “boatyarditis” which is Al’s term for developing problems that lead to spending money and staying longer than expected at the yard.  So during our week of waiting we had the engine water pump impellers replaced as a precaution form sitting dormant all winter.  But the new impellers didn’t work because the pumps were old and worn out.  Voila, order new pumps, ship them 2 day air because we “are leaving soon”  (cha Ching the cash register sings) and have them successfully replaced about the time we find our electric work is delayed anyway.  Oh well, it’s only money!  With  too much time on our hands, we think back on things that weren’t quite right and I suggest, we look at our windlass which raises and loweres the anchor.  It was giving us problems in Maine last  summer.  So we pull out some chain and this is what we saw. 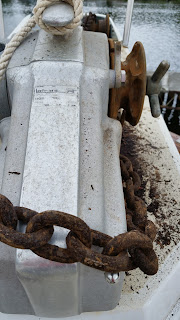 A very worn out gypsy which I call the “sprocket” which feeds the chain along and worse, an incredibly rusty old chain!  Silly us, to not rinse the chain after our last time anchoring in New York  Harbor which is salt water!  We had plenty of travel time in fresh water but never anchored again so we left the chain put away with salt on it and it already was old chain with some rust.  Simple solution, but a time consuming and expensive correction, order 220 feet of new chain and a new gypsy. 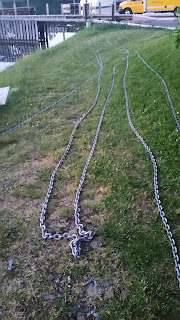 To make a long story a bit shorter, the simple solution was not simple.  The chain ordered never came days later so Al found chain available at a West Marine in Buffalo, a 5 hour drive away and called in a favor of his college roommate.  Randy graciously took time away from work, and drove Al in his truck to get our new chain.  Then John Short worked with Al to remove parts off the windlass to prep for a new gypsy and their efforts lead to old screws shearing and a drill bit getting stuck in the windlass.  Now we have a brand new windlass and new chain!!  Since it is First Mate work to raise and lower the chain, we made the chain my birthday present and the windlass (discounted by Defender for Father’s Day), Al’s Dad day present!  Oh yeah!! 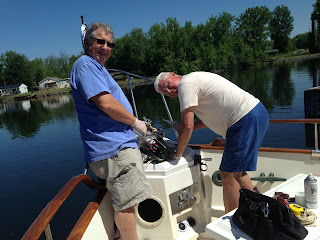 John and Al work well together!  So by Wednesday 6/13 the new chain was neatly installed in the chain locker and we declared our departure would happen the next day.  But then Al decided we needed one more day to get updated Garmin charts for Canada and crazy wind on Thursday made that a good decision.  In the mean time, our boat buddies on Greeks’s Folly got their boat splashed and we enjoyed more social time among the 6 of us. 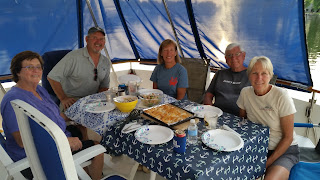 The first night (Tuesday) with Tom and Colletta, Pam and John, we enjoyed a delicious ranch chicken dinner made by Pam! 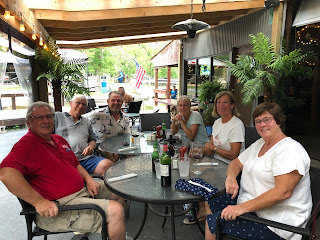 The next night (supposedly our last night) we enjoyed a meal out together. 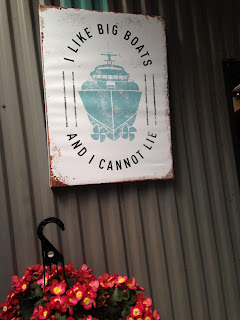 Al snapped this picture at that restaurant!  Rather fitting for all of us! 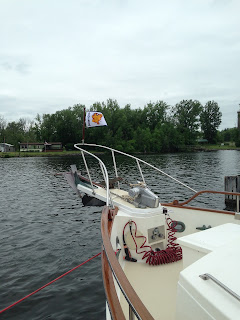 So InSpeyered 2 sits patiently waiting to take off with her crisp new AGLCA burgee given to us by my college roommate, Lynn and her husband Rich last summer when they noticed how worn and tattered our old flag was.  And even though we promised her we would for sure leave on Friday, our departure was delayed one more day, waiting for a Garmin navigation chip to arrive.  Our shipping bad luck continued, so despite paying for over night shipping, it took 2 days to get to Brewerton.  But  on a positive note, this blog post is being finished on Saturday 6/16 with chip in hand at a spot further up the canals.  More on that for the next post. 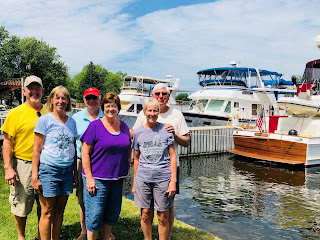 Our last picture together with our 3 buddy boats behind us, floating peacefully together, waiting for more adventures! 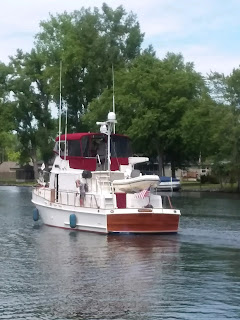 Finally taking off going west on the Erie Canal!  Canada, here we come!!