Exploring the New York Side of the 1,000 Islands

On Friday 6/22 we shoved off the free dock in Cape Vincent and headed out into the wide St. Lawrence River with a perfect blue sky above and comfortably cool weather. 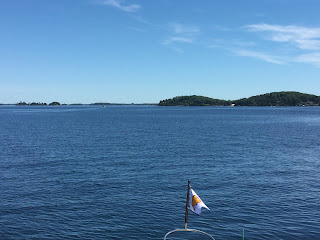 We cruised down the river 17 miles for a stop in Clayton, NY which is a popular little tourist town and typically visited by many loopers. 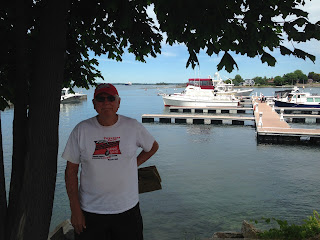 As always, when we tie up for the day, we head out into town for the daily walk and to see what treasures the town has to offer.  The Clayton Municipal Marina looks empty at this point in the day but it did fill up for the weekend as the day progressed. 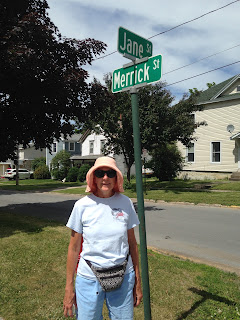 Our walk took us by Jane Street so it required a record shot!  The day warmed up enough to allow shorts and short sleeves but not so much to work up a sweat. We walked to the local grocery for a few supplies and came upon an Amish man selling fresh strawberries from the back of his buggy while his horse nibbled grass by the parking lot!  They were sweet and cheap so we bought several quarts along with some homemade strawberry jam.  Small problem, the jam rolled in the bag and squished some berries putting juice stains on my shorts and T!  But Al was the hero to fight with the washer until it started properly to get those stains removed! 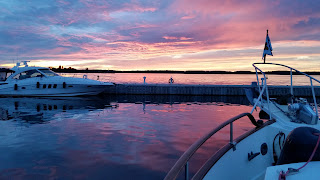 After docktails with new friends on Zoey’s Adventure, we were treated to this spectacular sunset.  But those beautiful clouds reflecting the sunset means rain is on its way.  So Saturday was a wet day and perfect for visiting the Antique Boat Museum in town. 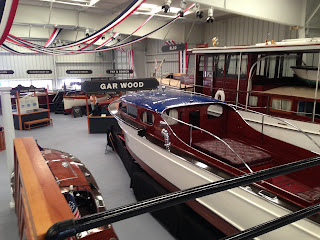 This museum was very interesting and housed lots of varied old, but well restored antique boats.  The highlight was touring La Duchesse, a very large, 2 story house boat from the early 1900’s that was owned by George Boldt, millionaire hotel manager who was the proprietor of the NY Waldorf Astoria.  It rained so hard and nonstop that day so we couldn’t take any pictures of La Duchesse.  On the way back to the boat, our hunger took us into Bella’s for a late lunch with warm homemade soup! Sunday was overcast and cool so we opted to take the Clayton 1,000 island tour boat that took us around lots of small islands and then to Heart Island where Boldt Castle was built. 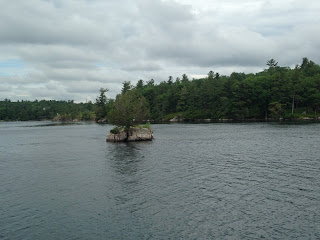 This is Tom Thumb island, the smallest of the 1,864 islands that comprise the 1,000 Islands area.  To be an official island, the rocky surface must be above water 365 days of the year and support the growth of at least one tree.  Cormorants live on this water and their acidic poop kills vegetation.  So we saw islands that lost their tree, but once an island, always an island despite the damage from cormorants!  Another tidbit about the islands, each one is either Canadian or American, none are split.  So the international border is quite a crazy crooked line.  And while Canada has more islands, the total land mass is about equal because many Canadian islands are small. 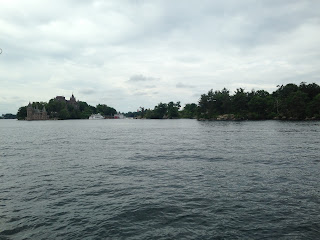 Dead ahead is Boldt Castle that was built between 1900 and 1904 as a tribute to the unending love George Boldt had for his wife Louise.  He spent an enormous amount of money and time on every detail of this lavish castle and abruptly stopped construction when Louise died suddenly.  The castle was never completed and no one ever lived in it.  Instead it gradually declined from weather until the 1970’s when it was bought and partially restored.  What we toured was that restoration project in process. 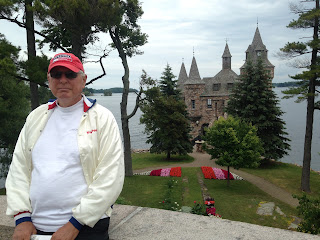 Al stands in front of the Power House which held 2 generators to bring electricity to the castle. 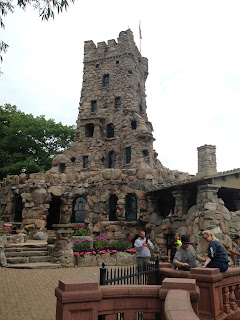 This is the Alster Tower which was to be the “playhouse for guests” including a full bowling alley, dance floor and billiards room.  Inside it is just beginning to be restored. 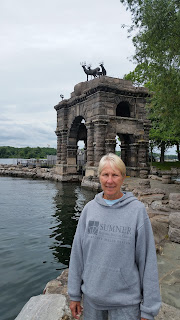 This is the Entry Arch, complete with statues of stags to greet all the anticipated guests.  What a sad shame that this elegant castle was built for no one to enjoy except tourists to see its restoration! 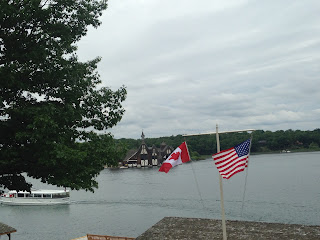 Across the small bay is the massive Yacht House which housed La Duchesse part of the time while the castle was being built. George lived on the house boat while overseeing construction.  Many boats were kept in this “boat garage” as this was the “guided age” when the rich folks had lots of toys! 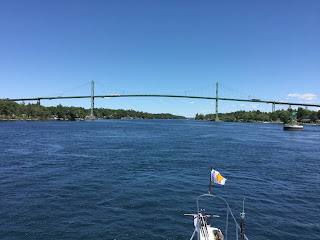 So Monday, 6/25 dawned as a gorgeous, blue sky day and we shipped lines after a morning walk to head back to Boldt Castle to tour the Yacht House.  The tour the day before did not have enough time for the castle and the Yacht House and our ticket was still good.  So our travels took us under the American span of the 1000 Island Bridge which connects the US to Canada.  This bridge has 3 spans, so one is on the US side, one on the Canadian side and the middle portion is the International section with the border crossing. 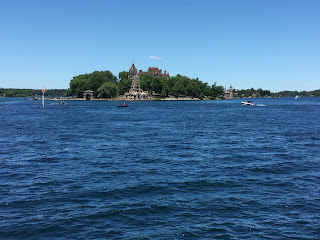 So this is Boldt Castle on a sunny day as seen from our flybridge.  We tied to a public dock to take our tour and while on the little ferry that travels between the castle and the Yacht House, we asked the captain about places to anchor.  He provided detailed information about the water around the castle and that was our anchorage for the night. 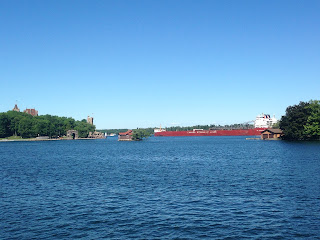 While on anchor, we watched this freighter make its way down river, passing many islands on its way.  See how even tiny rock islands can support a small cottage.  It would take some clear thinking  not to step out the front door and step right into the water!
Tuesday 6/26 was equally lovely so we up anchored and cruised down river 10 miles to tour Singer Castle.  This is a castle that was finished, furnished and lived in for many years!!  It was built for the Frederick Bourne, a self made millionaire who was the 5th president of Singer Sewing Machine, thus it has been dubbed “Singer Castle”.  The castle was purposefully built to look like a medieval castle and has lots of hidden stairways and passageways between rooms so servants could scurry about and see what the guests needed from hidden lookout points!  That way they would not disturb the family and guests but could be exceptionally efficient! 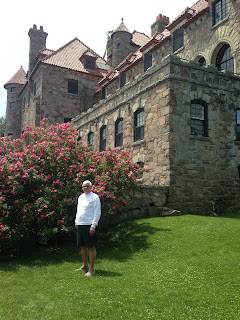 The rose garden was quite lush and lovely and now is a location for weddings and other special events. 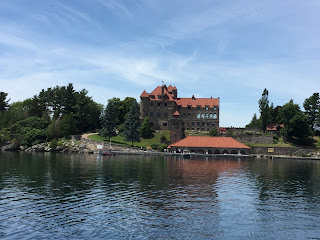 Singer Castle, seen as we departed the dock.  This was a really fun tour and much more interesting than Boldt Castle since it was actually used and appreciated by the Bourne family for several generations.  From here we decided to head back 10 miles to our anchorage next to Boldt Castle since we know the waters and its easy.  We took Victory Lap across the St. Lawrence to take our walks in the town of Alexandria Bay.  Another quiet night on anchor and then off to cross over to the Canadian side of the 1000 Islands!