Exploring the Canadian Side of the 1000 Islands

After a quiet night anchored next to Bolt Castle we awoke to the sound of loons near by.  Never saw them but listening to their soulful calls is a lovely way to start the day.  So on Wednesday, 6/27 we pulled the anchor slowly due to thick weeds hanging from the chain and headed out on an overcast and cool day to enter the waters of Canada.  We had a reservation at Gananoque Municipal Marina which is a place where checking in to Canada can be done by a simple phone call at a free “pay phone” on the outside wall of the marina office.  On the way we took a short detour to check out a dock that belongs to Harbor Hosts for the AGLCA on Hill Island.  Ann and Jeffrey Timmons, a generous couple who have completed the loop, offer their private dock for usage by other loopers in the area. 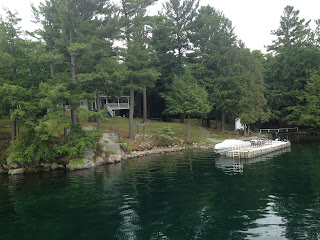 We plan to tie up at this great location for two nights after our one night stay in Gananoque.  Rain set in later during our 20 mile cruise but that sure beats the intense heat back at the dirthouse!!  We successfully checked in to Canada and then walked into the smallish but nice town of Gananoque to seek out a grocery, find a way to get Canadian cash and basically, to get exercise while checking out the area.  We both got thoroughly soaked by rain and chose to stay in for the night rather than eating out as planned but our missions were accomplished. It was a short 12 mile cruise on Thursday to our free dock on Hill Island.  The clouds stayed put all day but the rain stopped and the temps were comfortably in the mid 70’s so we ventured out to find a road to walk on and to find the 1000 Islands Tower which is an observation tower.  Since the cloud cover was heavy we opted to not go up in the tower on Thursday.  Our afternoon and night were quiet with a brief and pleasant interruption from a man who is in the looper planning stage and saw our burgee from across the water.  He used his dingy to come over to say Hi and chat about looping life. 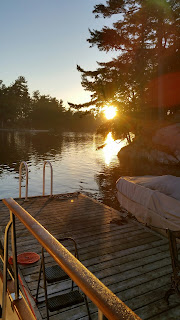 Al caught this great picture of the sun rising on our beautiful Friday morning and then went back to bed as the sun rises mighty early up here!! 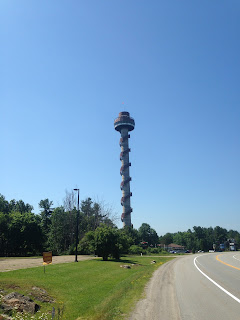 Friday remained a beautiful clear day with temps still comfortably in the range for shorts and tee’s without copious sweat!!  Al opted to take a shorter walk and hang by the boat to watch other boats go by. I took a long walk on a dirt road through a quiet woods where a deer crossed right in front of me, mindless to human infringement on her turf.  Then I paid the fee to take the fast elevator up the tower just before a whole tour bus load of folks arrived! 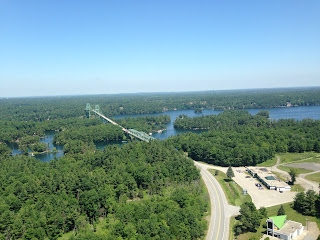 Our free dockage is below and slightly to the right of the bridge in the center of this picture.  This is taken from a Canadian Island looking at the Canadian mainland. 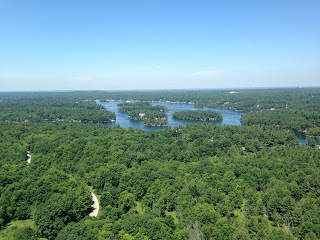 This view is looking west up the St. Lawrence at the Canadian side with island after island filling the river.  These islands are basically tops of under water mountains so the water depths can very from a few hundred feet to just a few feet! 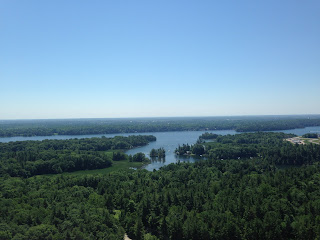 This is looking over at the US side of the St. Lawrence due north of the tower.  If the sun were in the right position to shine stronger on that side, I could have seen all the stops we made from Cape Vincent to Bolt Castle. 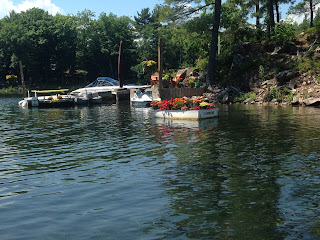 After some lunch, we dropped Victory Lap into the water and took a ride around to the US side and then into the waters that run between the US and Canada.  We passed this clever garden of plants in a small skiff, the USS Honeybee. Buying a small island up here has its merits!! 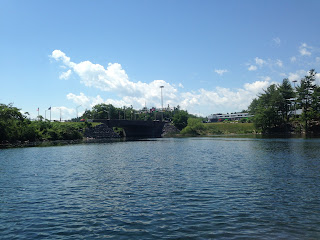 Dead ahead is a tiny portion of the International part of the 1000 Island Bridge and to the right is the customs crossing from the US into Canada. 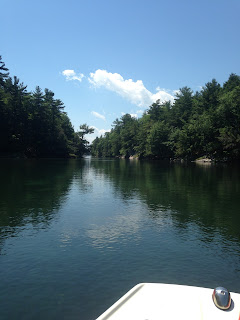 Just under that small bridge, we entered the International Rift, a fast moving, narrow part of the river running between our two countries.  The current here runs from 2-8 mph so our little dingy got squirrelly at times and we had to be careful passing other small boats.  But it was an interesting and beautiful stretch of water. 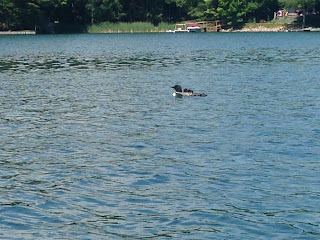 Then the treat of all treats, the water opened into a larger pool and sitting in the middle was a loon with 2 babies sitting on his/her back.  With babies aboard, the loon had to stay quiet and still allowing for a more close up photo.  We stayed far enough away so as not to scare the protective parent. 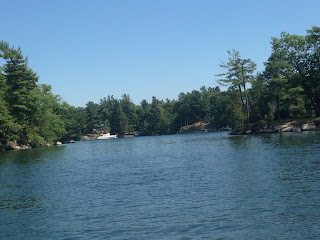 Returning to the mother ship, InSpeyered 2 is happily nestled in to this small harbor in quiet water and protected from wind. We stopped by the Provincial Parks dock where the boat was tied that belongs to the man who visited us last night and we talked some more about looper life and gained some local knowledge from him and his wife. 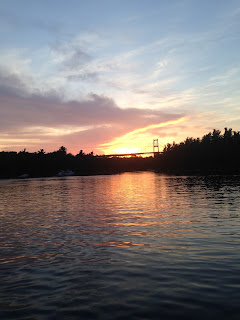 Then back on our boat to watch a spectacular sunset over the bridge and to enjoy a meatless meal prepared by the galley princess who is trying to lower the captain’s cholesterol!  Tomorrow we head back to Gananoque for the weekend festivities around Canada Day. The bummer is, the weather is heating up markedly so gone will be the cool nights and here comes the summer heat! 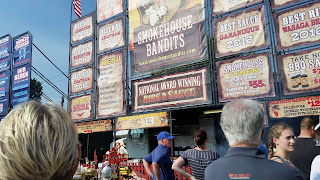 So here we are back in Gananoque for the Rib Fest on the Saturday before the first of July which is the official Canada Day.  It was hot and humid all day Saturday so our attempt to walk and then go to the fest was a bust!  We realized we needed more Canadian cash than we had in our pockets to buy any barbecue, so since I walk the fastest, I made my way back to the marina, grabbed all the Canadian cash we had and met Al back at the fest.  But we were soooo hot that we voted to go to the nearest restaurant to have late lunch and a very cold beer!  Once cooled off we went back to the fest and heard some great R & B music and bought a ridiculous amount of ribs, pulled pork and chicken with some beans and slaw and headed back to the boat to wash the sweat off!  Later we had drinks on our boat with 2 other boat couples until the mosquitoes chased us into our own boats.  Another looper day. 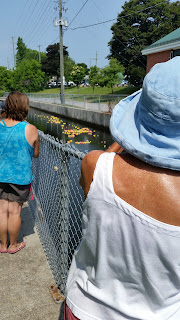 On Sunday, 7/1 it was Canada Day but the marina was surprisingly quiet.  It was again super hot and muggy so Al and I each took an early walk before the heat was intense.  Al used his walk to eventually get to the Lions Club breakfast so he could have his fill of “good breakfast food” and we met at the annual duck race in the park.  Here I am taking photos of the ducks floating along a small canal. 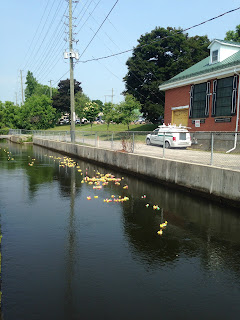 Tiny ducks just float along with the current.  It seemed to us that the method of controlling this race was very subjective and it involved 7 heats where they picked up bunches of ducks as they passed the finish lines in big nets and then released them again for the next heat. 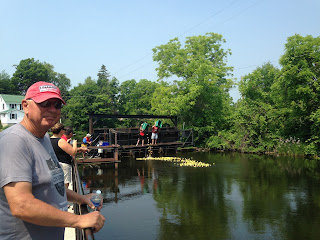 This is the last heat where they dumped buckets of ducks that apparently “won” the other heats for the last run of the day.  Then they scooped up the first bunch to cross the line and just gave first place to one they pulled out of the net.  Not a well controlled race, but the locals had some fun.  We ate our feast of barbecue for two nights, watched some fireworks and chose not to attend any more of the fest due to the heat.  We did have a nice evening meeting up with fellow loopers, the Hospadar’s who we met nearly a year ago in their home port of New Jersey.  They are the authors of “Reflections”, one of several books I bought for Captain Al many years ago as he dreamed of and planned this trip.  Quite fitting to meet up with these experienced loopers in the waters that Al lusted after the most.  Now we head out of the 1000 Islands and into the Rideau Canal.