Scenic Cruising on the Rideau Canal

The Rideau Canal, like the other canals we have traveled thus far, is a man made connection between naturally occurring rivers and lakes, made deep enough for larger boats to traverse.  It was created by the British during the years of 1827 to 1832 due to the Brits worry over animosity with Americans after we declared our independence and won again during the War of 1812.  The canal was meant to be a passageway from Lake Ontario to the Ottawa River which then would allow larger vessels to reach Quebec.  For us, it is a spectacularly scenic waterway to enjoy!  So from Gananoque we traversed 25 miles over 3hours to arrive at Confederation Basin Marina in Kingston, Ontario on 7/2.  The heat wave prevailed so the cool breezes while cruising were a welcome relief!

We don’t change much so we arrive in a nice town with lots of history and touristy things to do but, nope, we see the town via our walks, hit up the grocery stores (there are two in this town), a hardware store, and I find a farmers market!  I had to go to both gorceries trying to find alternative protein sources (fake meat).  When I asked a local where I might find alternative meat products, he responded with a question, “is that like alternative facts?”  Guess our President is gonna haunt us some in Canada 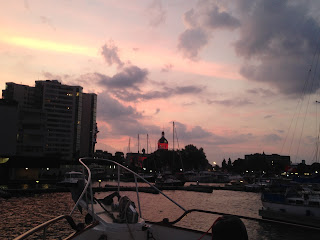 The first night we were treated to a lovely sunset over the lighted dome of Kingston City Hall.  Tuesday 7/3 was another hot day so after a town walk, not much else was accomplished except for boat chores and reading about the Rideau to begin the navigation planning along the canal. 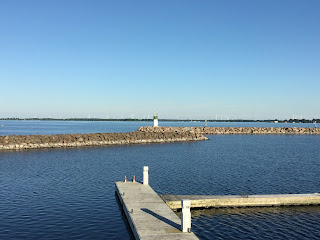 This was our view from the stern looking out into where Lake Ontario meets up with the St. Lawrence River and far across the water (enlarge the photo) you can see a very large wind farm.  Apparently this area is most often windy. 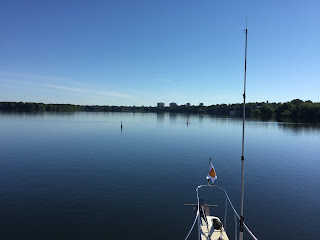 On our holiday, July 4th, we headed out of the Confederation Basin and began the trek north up the Rideau.  In many places the water is wide but the channel is very narrow and shallow.  We had as little at 2 feet below the keel at times.  But we didn’t encounter much traffic and just meandered slowly.  And it is another very hot and still day! We got an early start (for us) in order to get the 9AM  opening of the LaSalle Causeway Bridge, that is a busy thoroughfare for Kingston residents and only opens once an hour.  The Rideau is old and the methods for communication are also old school so we hailed the bridge to open with 3 long horn blasts and one short one.  No radio requests! 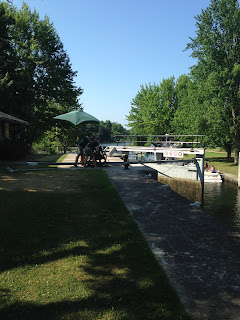 We will traverse 44 locks before we reach Ottawa.  On this first day, our first lockage was a flight of 4, meaning 3 locks are together so when you exit one, you immediately enter the next.  The 4th lock was a very short distance away.  That means there is no time to rest between locks.  These locks are the originals with a few parts replaced, so are opened, filled and managed by hand.  It takes 1 person to open sluices that allow water to flow between locks. 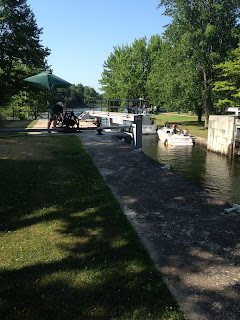 It takes 2 persons per side to turn the gears that open and close the gates.  Many of the lock workers are young students and ever so helpful.  So we entered our first lock with 3 other boats, making it a tight fit and I immediately had trouble catching the cable closest to the lock gate and we nearly didn’t get tied up properly.  Lots of effort and will power got that line around the cable in time.  Al and I had set a plan for how to enter and tie up but our plan didn’t prepare this nervous first mate with the reality of water flowing in front of the boat with some force, how close we had to be to the lock gate,  and my panicked reaction.  As we were raising up a bit over 10’, a nice young female lock worker politely asked if I’d mind if she came aboard to help with the second lock.  My response was “heck yeah and I’ll even provide lunch!!”  We lucked out further as a second young girl joined us as well to help in the stern.  We were spoiled, but did manage to lock through 3 more locks that day, that were all single locks, with some miles between them, all on our own.   We finished our July 4th holiday with 7 locks completed, raising up 79.5 feet total for the day.  We had covered 17 miles and it took 3.5 hours.  With the heat and the stress, this first mate could barely muster a slow walk around the grounds of the Upper Brewers Lock where we tied to a lock wall for the night.  The heat had us turn on the generator to blast the air conditioning to cool the boat and the crew!  The only Independence Day celebration we enjoyed was watching the holiday show in NYC on TV. 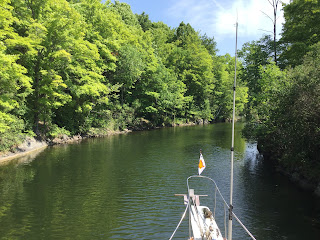 But things have gotten much better and the next day we cruised through some beautiful country covering about 10 miles, with no locks and some deeper water.   Bye, bye stress! 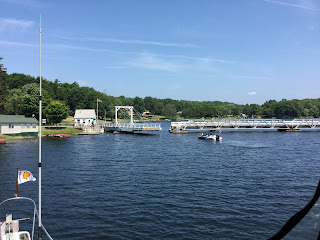 We did need to have the Brass Point Swing Bridge open for us and again, it was all done with no radio contact.  We could see the bridge tender and, after he waited for a car to pass, he manually moved the gate to block the road, and then manually moved the gears to swing the bridge open.  With a friendly wave we were through and on our way. 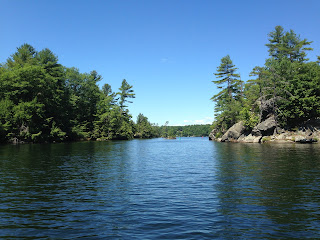 This is the narrow entry into Morton Bay but it is well marked.  We took this from the dingy because the narrow passage came up too quickly to have a camera ready so we went back and took the shot to show how beautiful and interesting this water really is.  We planned a day of hiking for Friday so Thursday afternoon was chore time and swimming.  But there is always something!  I tried and tried to pull our new swim ladder out to drop it into the water and just couldn’t do it.  So while I cleaned the decks with water from the bay, Al inspected the ladder and discovered the bolts attaching it to the new swim platform, were a tiny bit too long and blocked the ladder.  Hind sight: we should have tested it back in Brewerton to see if it worked properly.  But Al is a clever guy and with my help, we raised the bolts so the ladder would slide and had our delightful swim!  More work was done then to shorten the bolts and for now it is in working order! 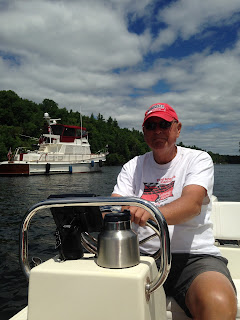 We had inside information about a great hike up to Rock Dunder which loomed above the bay.  The folks we met on Vahevala in Oswego had filled us in on what to look for to access a trail.  So on Friday we dropped the dingy into the bay and found the access point. 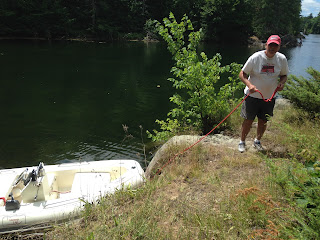 We tucked Victory Lap into a protected spot behind a jut of land into the bay and tied her to a tree.  Then off we went, not knowing how steep and difficult this trail would become along the way but we were determined. 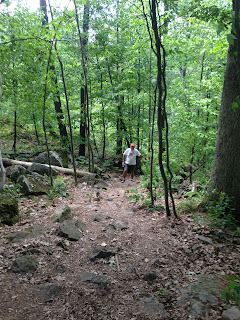 Al praised his new hip and did well climbing step by step over rocks and roots on the way up the mountain. 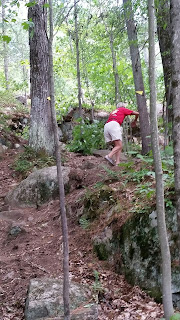 I touched every tree I could to keep my balance and thanked them all for their service. 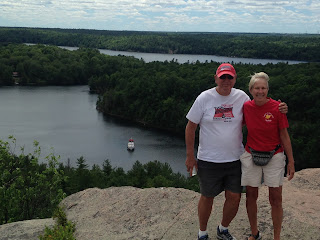 And what a prize at the end of the 2 mile trek up that took about 1 1/2 hours!  We had the company of 3 nice young girls who snapped our picture with InSpeyered happily floating below us.  The girls enjoyed hearing how we got to that point from Tennessee by boat!  So hindsight again, climbing up that far with only one bottle of water apiece and no snacks with no lunch eaten before we left was less than smart!  Needless to say, the trek down took a lot of determination.  But we made it and had so much fun, we repeated the processs with water and lunch packed the next day! 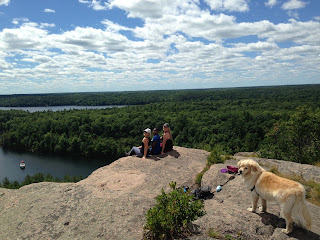 These are our new buddies and their darling dog admiring our boat and lifestyle! 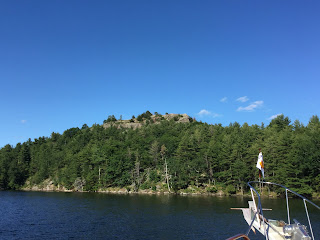 This is Rock Dunder viewed from InSpeyered 2 just before our second day of climbing. 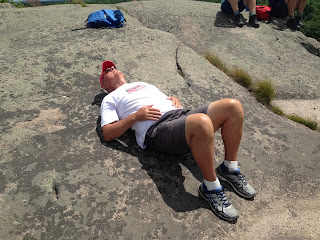 The Captain enjoyed a brief time of shut eye with the breezes blowing across the rocks, satisfied this time with some snack food and plenty of water.  Our descent the second day was a piece of cake!
We are glad to have extended our anchorage to 3 nights and with the weather cooling, sleeping was wonderful and peaceful.  But we paid the price of swinging in the breeze with the anchor nestled in the weedy bottom of this bay for 3 whole days and nights. 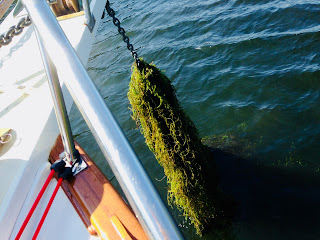 On Sunday 7/8, we pulled the anchor and the new windlass groaned with the weight.  The chain initially was fairly clean but after pulling only 30’ out of the 100’ dropped, we started seeing the heavy collection of weeds and mud tightly wrapped around chain and eventually the anchor! 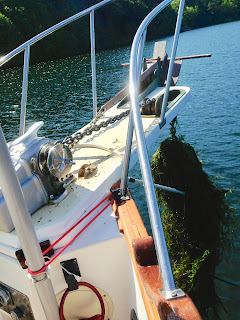 As the chain was slowly raised and thoroughly sprayed off, some weeds dropped down and made the “tree” of weeds widen!  Al had to leave the boat in neutral and join me with a second boat hook, in pushing weeds back into the bay.  It took about 40 mins to get the anchor free and back in place on the pulpit!  Thanks to the new windlass for raising such a heavy burden without dying on us!!