Much to See Along the Northern Half of the Rideau!

At this point we have been on the Rideau Canal 10 days and have cruised a bit less than half its 126 miles as we’ve gone very slowly with short days of travel.  On Saturday 7/14 we easily released our mooring ball by Colonel By Island and headed 18 miles to Smith Falls, putting us at mile 60.2.  We went through Locks 32 and 31 on our own with no stress.  This is getting easier!  The heat stayed with us but the mornings have been a bit cooler so our travels were comfortable.  We stopped above lock 29A right in the heart of the town.  Our walk around town was mixed with checking things out and hitting up the first Walmart we’ve encountered so far.  We got some groceries, some produce from a stand (delicious local corn!) and bought a replacement mat for the boat (to replace one that blew off at Brewerton and since this posting is being written late, I will add that the new mat already blew off the boat today so only stayed put for 8 days!). 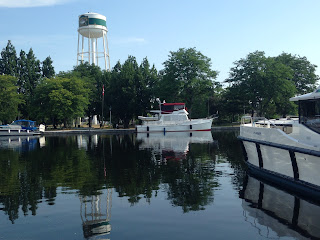 The wall in Smith Falls is shady and has a nice park.  Note the boat in the foreground to the right.  It is one of the rentals through Laboat and is made with built in fenders all around (the dark areas are rubber) so nonboating renters can’t beat them up too badly in all the locks!  Clever idea! 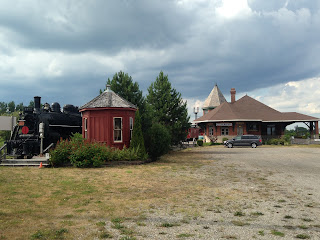 Smith Falls is home to a great little railway museum, so after shopping, we walked over to take a tour. 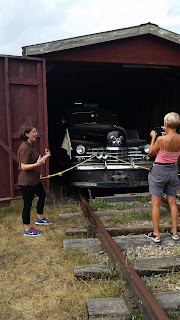 Our private, no extra charge tour guide is named Jane and she had soooo much enthusiasm about the museum that she made the tour extra fun.  She was especially happy to show us this railway car created from a Cadilac that the Chief Engineer used for his personal transportation when he needed to travel on the rails. 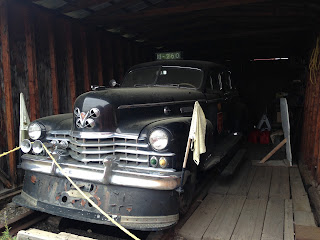 A little better view of this fancy working rail car. 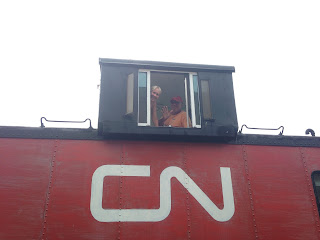 Jane thought it would be fun for her to take our picture in the cupola of a caboose. 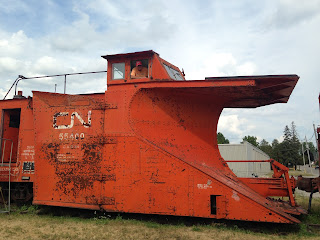 Al would love to “captain” this snowplow train car.  Pushing snow around was something he enjoyed in Upstate NY back in his college days. 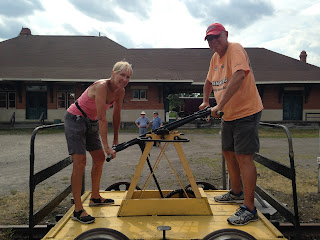 Jane offered that we could pay to take a short ride on this pumper car used to run workers up and down the rails, but we declined and just posed for her picture taking. 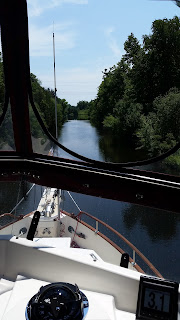 On Sunday we took a great walk on the Rideau Heritage Path along the canal and then untied lines and headed right into lock 29A which dropped us 26’.  This lock replaced the old locks 28,29,and 30 so is automated and efficiently lowered us more than any of the other locks.  We went through this narrow cut on the way to Merrickville, a 14 mile run through 2 locks together and 2 single locks spaced fairly close, so there wasn’t much down time cruising.  We stopped and tied to the wall in Merrickville in a little embayment called the Pond which was next to the water release dam. The town was full of kitschy, expensive stores so after a quick run through, exploring the town was done!  Knowing the water was fresh, as thousands of gallons of water were rushing past the boat, we cooled off with a swim, staying close to the swim platform because of current. 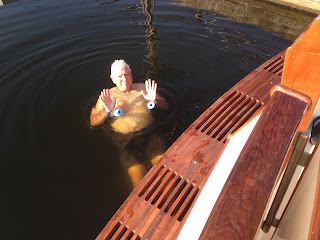 Good way to end the afternoon! 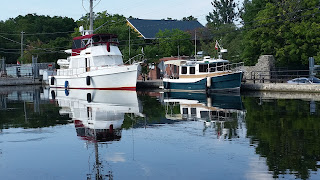 A boat taking the space in front of us moved later in the day, so I went over to the blue line where this nice Ranger Tug was tied due to lack of space in the Pond and knocked on their boat. I met Dennis and let him know he could move to the nicer area with electrical hookups in front of our boat and that is what he and his wife, Peggy did.  So now we have new friends.  The next morning we took a walk in the heat, found breakfast at a coffee shop and used their wifi to order replacement Kidde fire extinguishers that are on recall. We are having them sent to Al’s sister, hopefully in time for her to drive them to us when she visits us in August.  A productive morning! 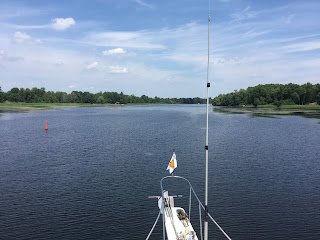 Late in the morning on Monday 7/16 we untied lines and headed out to traverse 7 miles and 7 locks.  Our first lock was one of a flight of 3 and it had a swing bridge that had to be moved for us to enter and lo and behold, the bridge swung and sat on the starboard side of the lock so tying there was a challenge.  We were alone and had plenty of time, so some quick moving of fenders and lines allowed us to tie up on the port side for the first time while locking.  It just shows how comfortable we (really I) am getting, giving us flexibility in these locks!  The rest of the locking was uneventful and included some nice, cool breezes so the day was enjoyable.  We stopped below the Burritts Rapids Lock 17 and had the dock to ourselves. 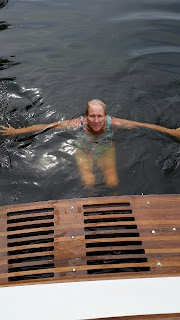 A nice swim off the stern was refreshing!  We met up again with our new friends on the Ranger Tug and had a nice dinner with them at a restaurant across the street from Burritts Rapids Lock. 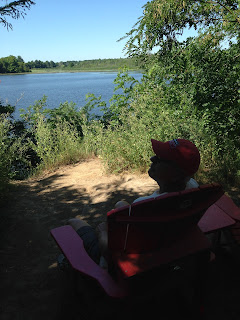 The next morning we walked the Tip to Tip trail on the Burritts Falls Island and Al had a short respite sitting in a chair at the far end of the island.  What a cool place to watch the boat traffic on the Rideau! 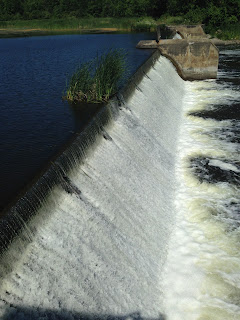 On our walk, we could see the Burritts Falls that we circumvented with the lock. So walk done, we simply untied from the dock and traveled an easy 18 miles with no locks to contend with and breezed into Hurst Marina to recharge batteries with their electric, catch up on laundry and use their service car to do a serious grocery restocking. Oh, and we took advantage of their swimming pool to cool off.  An added plus was seeing our friends, Peggy and Dennis, as they were preparing to drive back home to Rumson, NJ with their Ranger Tug on a trailer.
We only have 22 miles to get to Ottawa with plenty of time ahead of us.  So rather than going the whole distance, we decided on one last stop at a lock wall and it turned out to be the best one yet! 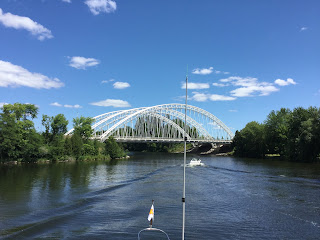 On the way to Black Rapids Lock 13 we passed under this unique looking bridge in Manotick. We also locked through a flight of 3 locks with a 20 some foot runabout, captained by a guy who is either not well trained or who is just too casual with his boating skills.  He entered first so should be first out.  While we hold our lines, he releases his before starting his engine and guess what, his engine failed to start.  And we were enjoying a pleasant breeze which blew him diagonally in the lock, his bow heading into ours.  He had a woman with him who fumbled badly with a boat hook, so I quickly cleated my line and fended them off with our boat hook.  He finally got a line around the lock cable to hold his boat firmly to the wall and eventually got his engine to start.  But the lockmaster was not pleased and ordered him to stay put, allowing us to gracefully exit one lock and enter the next one and smoothly tie off (so much better than the first set of 4 locks 2 weeks ago!!).  So the next 2 locks were easy as we were first in and first out. 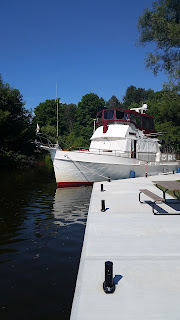 And soon we were tied to this fairly new, lovely wall near a sweet little park that connects to the Ottawa Greenbelt trail.  We moved along 14 more miles and are now just above Lock 13.  There is no #12 anymore so we have just 4 locks and 9 miles to get to Ottawa.  We did create a bit of a stir as Al chose to spin the boat around before we tied up, so we were facing out to leave the next day and it was a narrow and shallow area.  After much revving of engines to complete the tight turn without getting mired in the mud, we were surrounded by very muddy water and lots of torn up vegetation!  But no one seemed to care.  The nice surprise was the availability of electric hookups that were close enough so we could use 2 30Amp pedestals and have enough power for air conditioning and a second running of the washer/dryer to wash sheets.  Doesn’t take much to make us happy!  Plus we have a great trail to walk both that afternoon and again the next morning before we untied to leave.  All is good in our world.  And note that all the pictures in the last 2 blog posts portray mostly blue skies so we have enjoyed an unusual 2 weeks of no rain.  Bad for water levels but good for our traveling pleasure!