Ottawa is Canada’s National Capital.  I didn’t know that until recently.  Queen Victoria named Ottawa as the capital and apparently it created quite a controversy since it was not quite the thriving town as a few other cities and was initially a trading post.  The Ottawa River played a large part in that trading business.  But now Ottawa is a beautiful and friendly city with spectacular architecture and lots of things to see.  So on Thursday 7/19 we untied at Black Rapids and made our way the short  trip of 9 miles and 4 locks.  But we had 2 obstacles that day, one was a double lock that we had to wait for and the other was a low bridge that wouldn’t raise during heavy traffic times in the morning, around lunch time and in the evening.  Because we walked the Greenbelt trail and took our time in leaving, the lock wait pushed us too late to catch the bridge opening before lunch.  So we cruised achingly slowly to time our arrival with the bridge opening.  And of course, car traffic was heavy so we waited an extra 20 mins or so for the bridge to finally raise.  That put us in Ottawa mid afternoon. 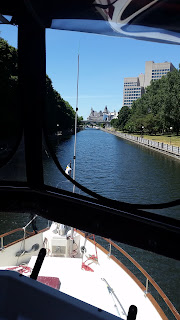 No more Rideau River, it was almost all canal travel into the city.  This is our first glimpse of the stunning Parliament building.  We felt lucky to find a spot easily along the city wall managed by Parks Canada but all of the 50 Amp pedestals were taken and the 30 Amp plugs were each spaced 20’ apart.  That is too far for our splitter and we don’t own a 30 Amp extension cord.  So we toughed it out the first night without power and did fine as the night air cooled. 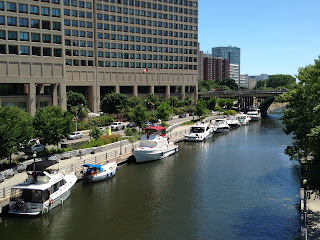 The wall is next to a very busy road and local construction made for a noisy place to tie up.  But there are no marinas in the area and this is where we stayed put. Our first afternoon was hot and muggy but we walked to the flight of 8 locks to see what we will be dealing with as we leave this city. 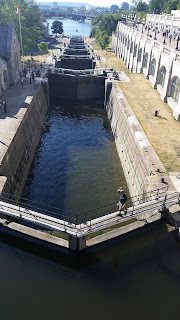 This view looking down made my stomach flop around on and off all weekend!  These 8 locks are all original and run manually by a small army of mostly young people.  Lots of tourists visit the locks to watch the spectacle of boats locking up or down.  Thurday, was our day to explore a bit so we went to Byward Market which is an area with outdoor and indoor stalls of prepared food, produce, pastries and lots of touristy things to buy.  It included areas where street performers entertained for tips.  We chose a tiny place that made Thai food and bought our dinner.  We made a point to be back to the boat by 5:30ish because a local guy volunteers as the harbor host and he planned to stop by on his bicycle trip home from work.  So Thurday evening we shared some wine with our new friend Daryl Banke who gave us good information about navigating the city.  Friday morning we didn’t do our usual sitting around, we got going to get a good spot to watch the 10AM Changing of the Guards in front of the Parliament.  Every time we ventured out, we also made it a point to stop at the Fairmont Château Laurier which had a lovely restroom off the grand lobby that was accessible to the public!  That also meant passing by the flight of 8 which again, made my stomach do a flip. 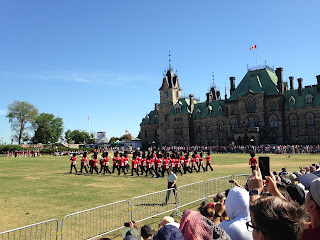 Another hot day for these poor men and women in winter garb performing the ceremony for the Changing of the Guards.  Of course this is just a ritual as there are no real guards protecting the Parliament building any longer but there are plenty of police around.  This ceremony included the guards marching in with a marching band and was quite a spectacle but it was a long event. 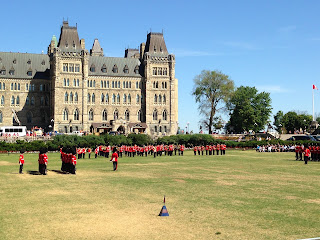 We stayed for the whole thing despite the heat and then made it back to the Byward Market to get Beaver Tails for a late breakfast.  They are basically fried dough with cinnamon sugar but are a specialty of the city.  And apparently even President Obama made it a point to stop at the stand to buy a Beaver Tail during a visit in 2009.  Hot and sticky, we hoofed it back to the boat and rested a bit.  Then we decided we wanted power for air conditioning so we found a marine chandlery a ways away and caught a bus to go and find a 30 Amp extension cord.  We kinda took what ever bus was at the stop and the driver said he’d get us close to the right address.  But in hindsight we should have waited for the proper bus that went a much more direct route.  It was a long bus ride with too many stops!  At least we were in air conditioning for the trip.  We bought our cord, found the right bus and were back at the boat late afternoon.  Only to find other boats had come in and plugged in to the pedestals around us and we were left with only one available.  Mission foiled for us for Friday! 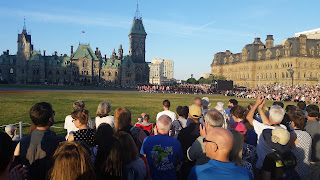 Later that evening we went back to Parliament Hill to watch Fortissimo, which is a military music performance that included the members of the Ceremonial Guard, the massed pipes and drums of the Canadian Armed Forces and the US Army Old Guard Fife and Drum Corps. It was standing room only and at times difficult to see but the music was very good.  Our pictures were poor because we were so far away from the performance. Two tired loopers then went back to the boat for more rest.  Al caught his second wind and made a third trip back to Parliament Hill to watch the light show on the Parliament building.  First Mate, me stayed in the boat and missed a major spectacle. 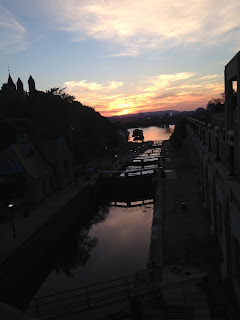 Al caught a beautiful sunset over the locks on his way to Parliament Hill. 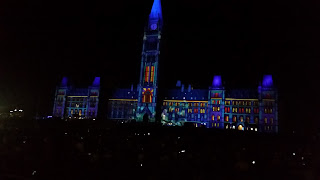 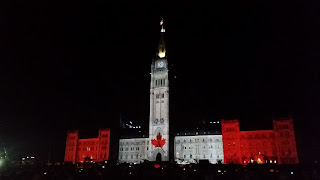 This was the finale and very poignant to see. 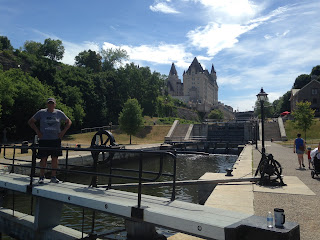 Saturday, 7/21 was Al’s day to plan as it was his 66th Birthday!  His first choice was finding breakfast at a patisserie in Byward Market. Then we walked down by the locks, crossed over the lower gate and walked across the Ottawa River via the Alexandra Bridge to Mosaiculture Gatineau. It is a collection of sculptures covered in felt wrapped potting soil with tiny plants imbedded.  These pictures tell the story of the stunning sculptures. If you tap on the pictures you can see more detail of all the plants involved. 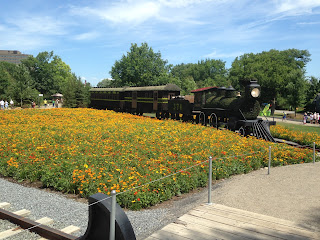 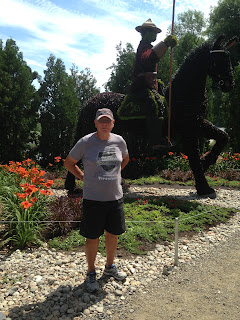 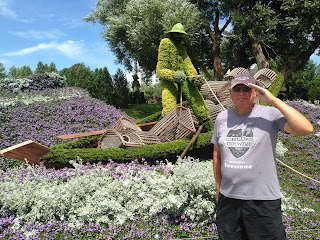 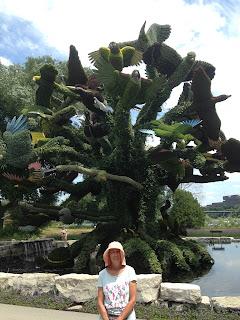 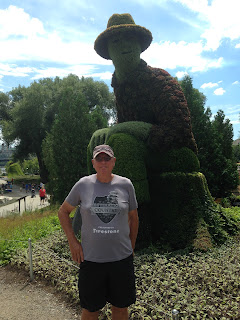 After a couple of hours meandering around all the sculptures and enjoying popsicles made from delicious gelato (salted carmel for me and strawberry for the birthday boy) we retraced our steps across the Alexandra Bridge and snapped a picture of Parliament hill on the right and our favorite bathroom stop at Château Lauier on the left. 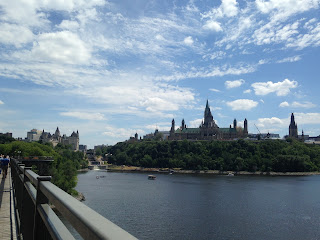 We walked through a park on the way and found this statue of one of our favorite historical figures. 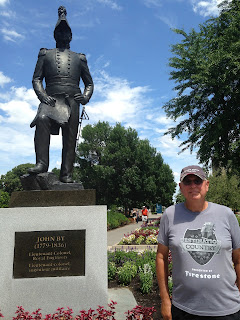 Captain Al and Colonel John By would have become good friends if they lived in the same era!  By the time we got back to the boat, we were thrilled to find that boats had moved and we had two power pedestals to use and spent some time putting our new extension cord to good use.  Happy Birthday Al, electricity for air conditioning tonight, the warmest one so far! With the boat cooled off,  we were able to get the salt off via showers and clean up for a nice birthday dinner.  Per Captain’s orders, we walked back to Byward Market to find LaPointe, a fresh seafood restaurant and we both had very good fish dinners.  It was a good day for Al.  We agreed to set an alarm for Sunday to move the boat forward to the blue line early, to be ready to lock down the flight of 8 locks. I especially wanted to be first in line to guarantee a starboard tie which is the side we are most efficient at handling.  We expected to have to wait for boats locking up.  Two days prior there were 19 boats on the lower line by the opening at 9AM, waiting to lock up.  They had priority based on numbers so all 19 boats locked up, using 3 locking chambers which took about 3 hours. The 3 boats on the upper line had to wait the 3 hours before they could lock down.  This weekend started the Construction Holiday in Quebec Province when most construction stops and workers have a 2 week vacation.  We had been warned that boats would come en masse up the locks to go south on the Rideau to reach the 1000 Islands.  So we figured if Friday was so crazy, Sunday could be worse. 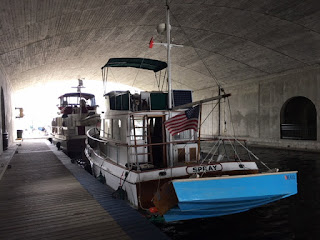 So here we are, first in a line of only 2 boats.  Our new friends aboard Spray, Sheila and Bill from Castine, Maine are tied behind us.  They turned out to be the smart ones and only arrived close to the 9AM lock opening.  We got up at 7 to “beat the rush” which never happened.  Surprise, surprise, there were only 2 boats on the lower blue line and the lockmaster chose to lock us down first.  So by 9:15 they had the first lock ready for our two boats and off we went! 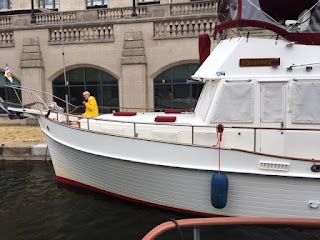 With rain jackets on, we were ready!  Thanks to Spray for taking pictures of us in the locks. 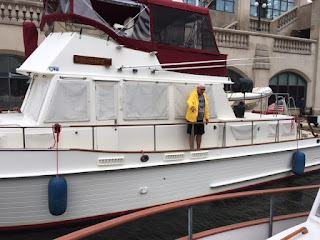 We were so relaxed in these locks, that the Captain had time to chat with Bill as we lowered down. 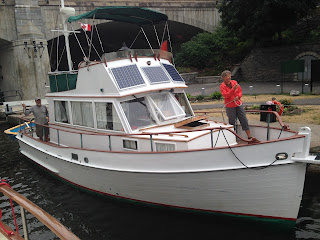 Sheila, has her camera ready to snap pictures of us. 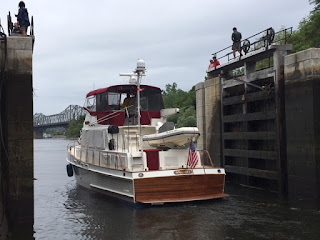 Why did I worry all weekend about this part of our trip?  The light rain kept a lot of tourists away so we had a quiet ride down!  Well we did have one mishap!  While leaving the first lock, one of our big black fenders on a relatively new and ridiculously expensive fender hanger,  jumped off the rail as it got caught on a cable on the wall.  The very accommodating lock workers refilled the first lock to float the fender up and they retrieved it with a long boat hook.  So we got both the fender and holder back with no damage and continued on down.  Added bonus, we only went down 7 locks because we glided through Lock 2 and into Lock 1.  And then we cruised on out to the Ottawa River with Spray following on our stern.  Goodbye big city and goodbye Rideau!