After exiting the flight of 8 locks in Ottawa on Sunday 7/22, it started to rain hard and the wind, sweeping up the river, kept building.  Our planned anchorage near Duck Island was not in a protected area and it was too windy there.  So we plowed on for 31 miles on the Ottawa River to find an anchorage that had protection from the wind.  We used information that was provided by another boater we met back at Chaffeys Lock on the Rideau.  We compared his information with what we read on Active Captain and decided our stopping spot would be south of Isle Dube.  Our friends on Spray followed us for most of the trip but they chose a slightly less protected anchorage that had easy access to shore for their dogs.  A few other boats were rafted together when we arrived in our anchorage but about the time we dropped anchor, they were moving on.  So we had the area all to ourselves.  The rain slowed some but the wind stayed strong.  So our attempt to cross the river and find a town to walk using the dingy resulted in us turning back and declaring it a “stay in the boat” afternoon! 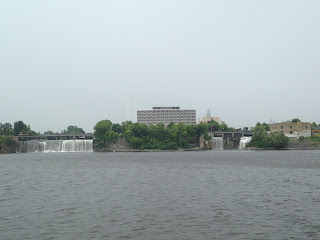 Just outside of the locks in Ottawa, we passed the Ottawa Falls.  The rain was just beginning. 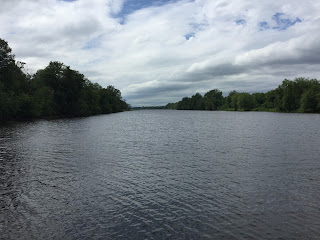 This was our cozy spot between 2 islands that were angled just perfectly to block the wind so the water around us was only rippling. 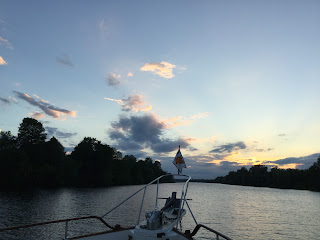 As the rain moved on and the sky cleared we had a lovely sky at sunset.  It was a productive afternoon of blogging to get caught up on our adventures on the Rideau.  We decided to hunker in and stay in this lovely spot for 3 nights since our next stop was a scheduled reservation at the Château Montebello for Wednesday and Thursday nights.  We needed a quiet break from all that city living in Ottawa! On Monday morning, Spray cruised by us to say goodbye for now, since they were moving on and it will be unlikely that our paths will cross. After some more work on the blog while Al spent time reading about the Saguenay River,  we took Victory Lap across the Ottawa River to get some exercise by walking the town of Wendover.  I have learned that I have developed an addiction to grocery stores so if I pass one, I feel compelled to go in and buy things that are getting low in the larder.  So before going back to the mothership, I popped into le marche (in this part of Ontario so close to Quebec, everything is in French) found some needed crackers and sandwich ham and felt accomplished!  Monday afternoon was just more blogging time on the flybridge and some deck cleaning with water from the river.  The boat was fairly muddy from all the time in locks!  Al split his time with a rejuvenating nap and more reading.  On the way to Wendover we noticed a pathway on the island to our north but we couldn’t find a way to bring the dingy in and access the path.  So on Tuesday, we decided to be more adventurous and found a spot to pull in to tie up for a different kind of walk. 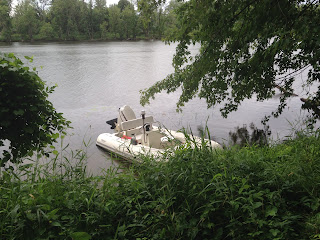 Victory Lap was pulled up on a mud and weed mix of land and since I had on sandles that could get wet, I stepped off the boat into the water and pulled her the rest of the way in. 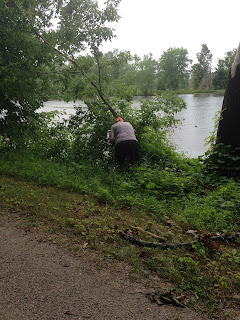 Al took on the job of walking through weeds (armed with bug spray on our ankles!) to tie her to a sturdy tree. 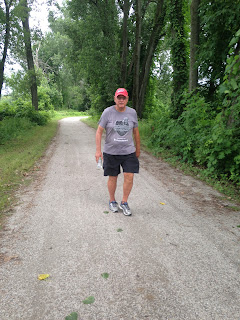 And onward we walked for a bit over an hour.  It was a comfortable temperature and we had a gentle breeze so, except for some annoying flies, we enjoyed a nice brisk walk. 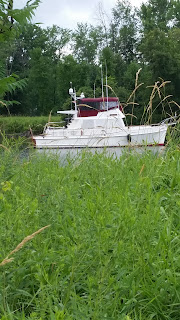 Through the weeds, we could see InSpeyered 2 sitting quietly in the anchorage. 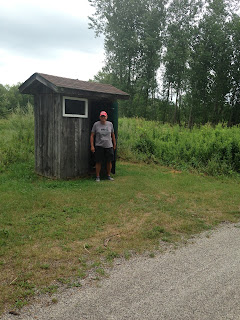 This path was a maintained bike and walking trail, equipped with dandy outhouses along the way.  Al made a grand effort to keep the holding tank on the boat as empty as possible by enjoying the availability of other bathroom facilities! The rest of Tuesday was spent blogging and planning the next part of our journey.  Al created a great map to scale of the Canadian waters we have cruised and still need to cruise to help in planning our timing for the next several weeks. 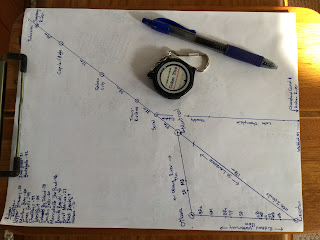 The engineer brain has spent considerable time on this yet to be finished map!  We had some more rain, but who cares when we’re quietly swinging on an anchor!  So Wednesday, 7/25 we pulled the anchor and our lovely new chain was as clean as it’s ever been after 3 nights sitting on the bottom of the river.  The anchor only needed a short spray and off we went the 11 easy miles to Le Château Montebello in a persistent rain.  We were plenty soaked from tying up but the warm air made it comfortable. 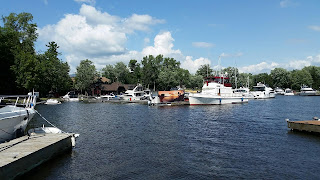 InSpeyered 2 is once again content to be tied to a good dock with electric and water as she was admired by folks walking the docks.  She stands out up here in Canada because most large and small boats are cruisers and not stately trawlers with teak rails. 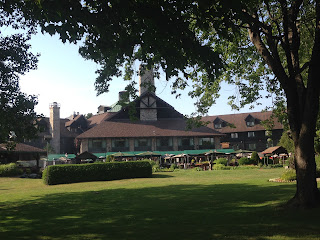 Montebello is quite a full service resort and we had access to all its amenities.  It also is very close to the little town of Montebello.  So on our first day there with raincoats on and umbrellas at the ready, we each took walks on our own.  I wanted a longer walk despite the rain and chose to walk to town.  Of course I had to check out the cheese and chocolate shops and the inevitable grocery store, where once again, a few items were purchased.  Al checked out the spa and made an appointment for his first ever “Men’s Executive Pedicure” which he enjoyed thoroughly on Thursday morning.   Also on Thursday morning, I indulged in “room service”, ordering crepes swimming in maple butter to enjoy on our flybridge.  Pleasant morning for us both! 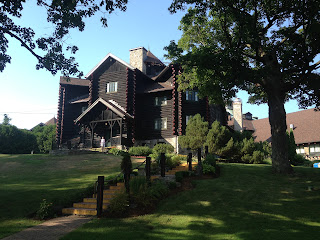 The rain stopped and the sun came out, so Thursday was a lovely day.  The grounds around Montebello are well kept and there are multiple trails through the woods for walking, biking and cross country skiing in the winter.  They were great for our walks.  My walk took me back into town to check out a restaurant recommended by the marina staff.  The menu of Cafe Entre Amis had a great menu so I found the captain and we went back and got 2 bags full of take out food to be consumed later for dinner.  Yum, savory crepes!  This French food is devine! 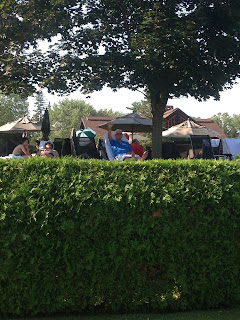 Later in the afternoon we relaxed at the pool and sat in lounge chairs looking over the river.  Doesn’t get any better than that!  Dinner was so scrumptious that, before untying on Friday, we took a long walk on the paths and ended our walk in town at our new favorite restaurant.  More crepes for me smothered in Nutella and real maple syrup.  Gotta keep walking to balance the eating! 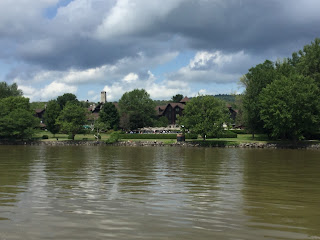 Montebello, seen from the river as we departed around noon on Friday.  We cruised the Ottawa River another 18 miles to visit the town of Hawkesbury, as they have a well rated town wall that is free to use. 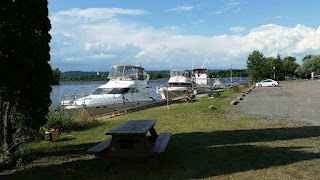 No electric here but InSpeyered 2 is all charged from the marina stay so this place worked well.  Al did the usual resting and reading while I took advantage of being in a town with a nail spa and got a much needed (and much cheaper the the Men’s Executive) pedicure.  Minor mistake though, Al suggested I take cash just in case but I was so intent on getting to the nail place on time, that I forgot to grab some cash.  I didn’t read the cash only sign in French on the door and was thoroughly embarrassed when it was time to pay and my Visa wouldn’t be accepted.  Some luck helped, since there was a nearby bank and Al actually answered his phone on the second ring so he could text the pin for the credit card to me.  Quick trip to the bank and I returned to the salon to pay with a red face! 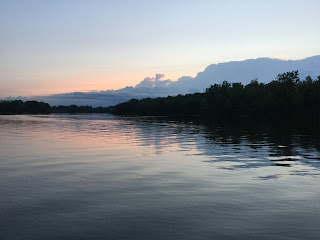 We were treated to a pretty sky from our wall tie up and had a quiet night.  Tomorrow we go through the 65’ Carillon Lock that the cruising guides suggest avoiding on summer weekends; opps tomorrow is Saturday! Guess we’ll take our chances!