We awoke in Portneuf on 8/15 to an overcast sky that eventually lead to rain. We both did a little rain walking but didn’t get a good workout. We had 38 miles to get to Quebec City and it made sense to time our departure just past the peak of high tide (around noon) so we could ride the flow of water out to the sea as the tide lowered.  That tidal current, along with the natural St. Lawrence River current made for another relatively fast cruise.  But the only drawback was the threat of thunderstorms which materialized along the way as the afternoon progressed.  So while we hit a top speed of 16 mph, we also had winds and rain and some occasional thunder and lightning to contend with!  It’s all a part of the adventure we keep telling ourselves!  We arrived to lock through at the Old Port Quebec City Marina mid afternoon and went straight to the fuel dock for a pump out and to take on 1,400 liters of diesel.  Yikes, there goes the credit card bill!!  The marina sits behind a lock so the tidal change does not affect the boats in its harbor which is nice.  It means calm waters while tied up.  Being antsy after an afternoon of sitting, I headed out to walk the streets a bit and find the market which was teeming with shoppers and lovely fresh farm produce along with meats, cheeses and all kinds of prepared foods. The Captain walked a bit and rested his eyes from the strain of watching the gages and waterway while driving the boat. 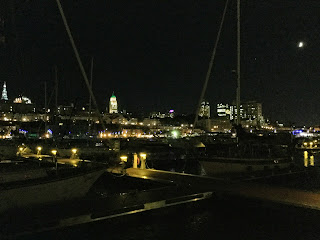 The view from the boat at night was spectacular!  Our first night, we were tired so we ate on the boat and rested while doing recon of the city to make a plan for exploring during the next few days. 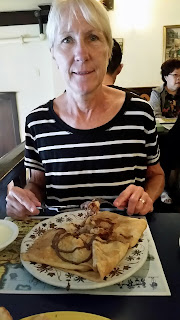 First up on Thurday morning was finding a good french breakfast on Rue St. Jean.  So while Al savored his eggs benedict, I indulged in crepes with chocolate and bananas, topped with vanilla custard. Yum! Once our appetites were satiated, we walked the city. 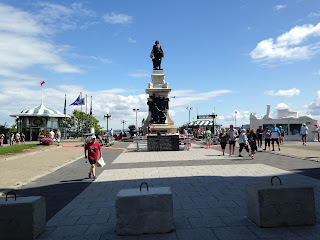 We made it up to the Champlain Monument and looked down at the great view of the St. Lawrence. 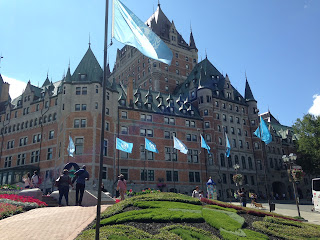 We popped in to the Château Frontenac and decided this was our second favorite bathroom stop while waking a city!  (First choice was the Château in Ottawa). 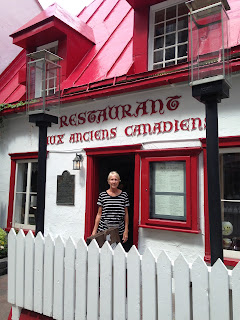 Part of our walking tour included scoping out restaurants that were recommended by my friend Lily (aka Grand-Maman to my girls back home) as she has lived in Quebec and knows Quebec City well. This restaurant ended up being Erik’s pick for his first night with us.  It has a very unique menu, more on that later. 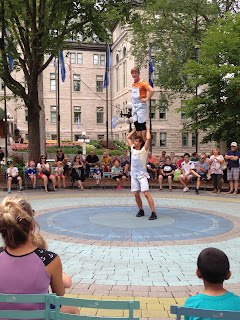 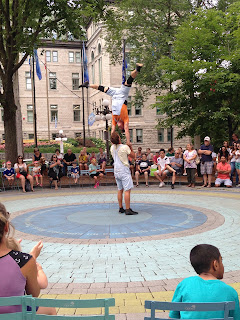 We came upon these street performers and thoroughly enjoyed their show while resting our legs for a bit.  Then we hiked down the narrow streets and steps back to the boat for a break before going back out to shop at the nearby chandlery for a few needed boat items.  More teak oil for me to apply to the swim platform, wahoo! The morning walking got to us, so rather than going back up into the city for dinner, we stayed close to the marina and ate at Cafe de Monde and had a mediocre dinner with a great view of the river. 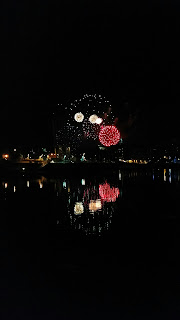 Later that night, we were surprised by gorgeous fireworks that we didn’t know were scheduled!  Ironic that we went to Montreal purposely to see their fireworks display which was a disappointment but were paid off with an unexpected great show both Thursday and again on Saturday!  Friday morning we spent doing catch up things and for me this meant getting a form mailed for a car registration.  For Al, it meant he slept in and enjoyed a slow cup of coffee. So after eating my luscious leftover crepes, I set out to climb up and up the streets looking for a post office and then seeing more sights of the Old City.  Al focused on engine room maintenance and then walking to find a bicycle tire tube to replace one he over inflated!  Plus he wanted to get some “happy hour” treats for Erik who was coming to join us the next day. 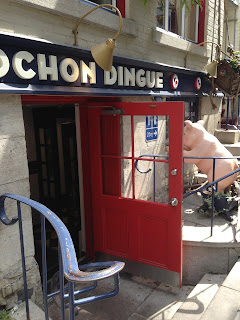 I accidentally came across another of the recommended restaurants that later became another choice for Erik’s visit. 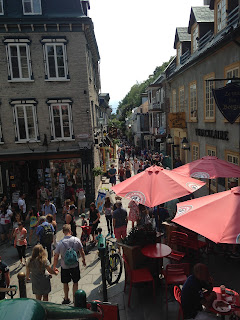 These streets could be anywhere in Paris! 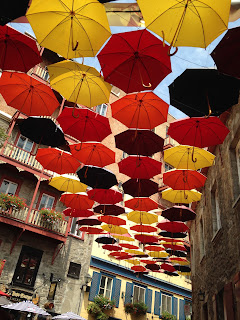 I had seen a picture of this street prior to our visit and found it by sheer luck!  Google maps had trouble with all the steps and narrow streets! 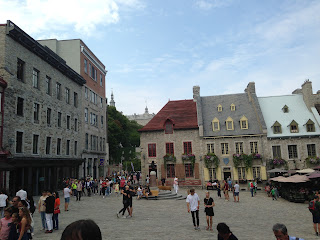 The Place Royal was one of my stops. 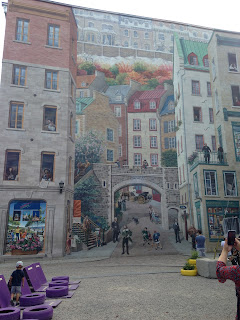 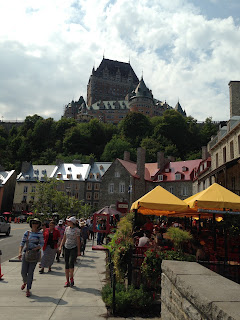 Looking up at the Château Frontenac gives one an idea of just how much climbing it takes to see the Old City properly!  The day got more cloudy until we were hit with a hard downpour about the time Al headed out to pick up very unique, thin crust pizza.  But it was worth his effort because it was delicious and perfect Friday night food.  Al’s pizza had smoked meat which was on his list of things to try in Canada.  Saturday arrived finally, which had us excited to see our son.  We used the day for some boat chores and a large grocery run to stock up for our week of travels with Erik.  It also included one last walk for me along the river and up some of the narrow streets of the city.  Chores done, and all cleaned up, we were ready to greet Erik when he arrived around 4:30 after a challenging taxi ride that left him on the wrong side of the harbor for the marina entryway!  So after Erik moved into the v-berth, we headed out to dinner up in the Old City at Aux Anciens Canadiens. 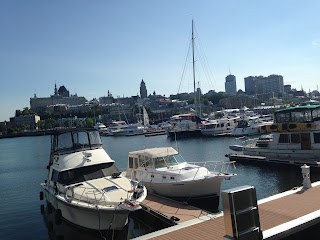 On the way, this picture was snapped by Erik of InSpeyered 2, sitting in the marina and itching to get  going again since we had 2 licensed captains! 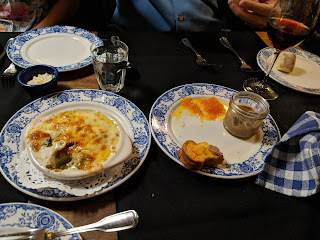 Our adventurous son, loves to try interesting food.  So dinner started with escargot and pate made from big game like bison and caribou.  (I have tried everything I read to do in order to put the proper french accents on pate, but none of them worked on blogger!) 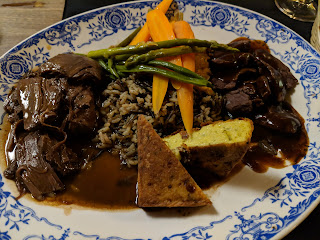 And his dinner was caribou!  Interesting food for sure!  After walking back to the boat with full bellies, Erik hit the sack and Al and I were not far behind after watching some more lovely fireworks.  The next day presented itself as a long and challenging cruising day to get the 3 of us to Tadoussac at the mouth of the Saguenay.  So we needed an early start.  Next post on our trip!