With Erik moved in as “Relief Captain”, we were poised to take on the 124 mile cruise to Tadoussac, which sits at the mouth of the Saguenay River as it empties into the St. Lawrence River.  This area is known as a breeding ground for several species of whales.  Beluga whales live there year round and are in serious jeopardy for becoming extinct due to massive whaling done in the early 20th century.  This is an area that Captain Al has dreamed of and talked about for years.  So Sunday morning we all woke before alarms went off and were locking through the Old Port Marina lock when it opened at 7am. Erik had done some research as we had done, and it seemed the 7am time for departure would work with the tidal currents.  Captain Erik drove us into the lock with ease and he and Al shared bridge responsibilities for the long 12 1/2 hour trip. 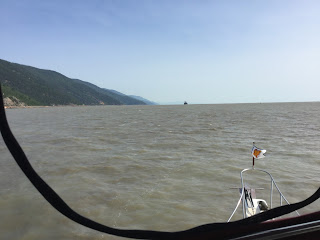 We experienced a mixture of rolling waves on the bow, some uncomfortable choppy seas and occasionally calm waters.  It remained chilly all day so we donned several layers and later in the afternoon added a few more to stay warm.  We passed a few big ships but no pleasure craft as it wasn’t a blue sky boating day for most of the time. 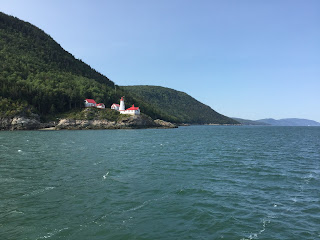 We passed this pretty light house along the way and at that moment, the sky had cleared.  As we neared the turn off for the Saguenay, we started seeing black spots and white humps on the water and realized we were seeing whales!  At the time, we didn’t identify any species but were thrilled to be amongst the whales already.  We also spotted little heads of harbor seals and gray seals.  We arrived and took a slip at the Tadoussac Marina, cold and tired with the sun just beginning to set.  After we all warmed up with hot showers we enjoyed chili that Erik put together in the crockpot that morning.  It was too rough for me to play my role as “Galley Princess”!  We all collapsed in bed, satisfied to have made it to the Saguenay. 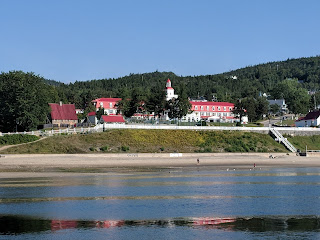 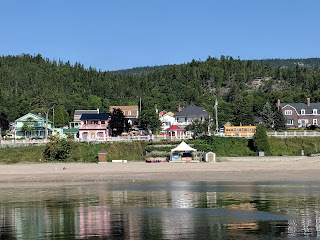 Monday morning was cool but clear and we were struck by how lovely the town of Tadoussac is and what a gorgeous location.  Above are two shots of town that Erik took from the boat before we headed up to a French restaurant for a unique breakfast that for Erik, included a glass of champagne!  Then we walked to the Whale Interpretive Museum and learned as much as we could about the whales we were about to go see.  It was then that we realized that the white humps we saw the day before were belugas!  But alas we were so tired and the whales were so far off, that we got no pictures of beluga whales. 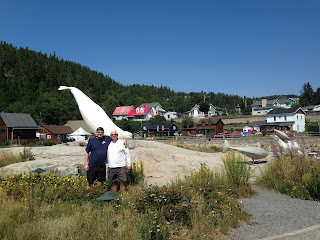 Except for the beluga statue at the museum! 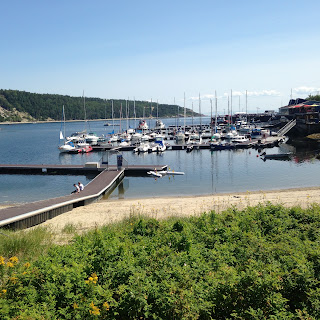 After some more walking in town, and the inevitable trip to the local grocery for things not purchased in Quebec City, we untied lines and cruised out with many different whale watching tourist boats.  A view of the marina and the whale breeding ground out beyond it, taken from the hills of the town. 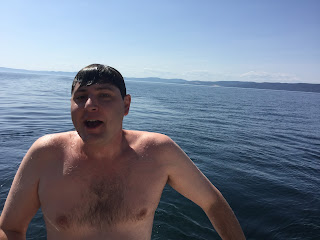 The day warmed up just enough for Erik to dive into the river to “swim with whales” for a few minutes in high 50 degree water!  Always the adventurer! 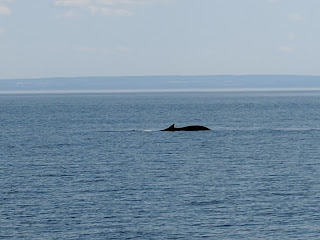 Erik took this shot of a minke whale and it seems to be the best picture of all that we took.  The area is a Marine Park and is well protected with strict rules about keeping at least 400 meters away from belugas and blue whales, both on the endangered list.  And boats are held to slow speeds (easy for us) and regulated to keep moving because sitting still may attract curious whales and then put them in danger when a boat starts up.  So the whales in our pictures are small dots! 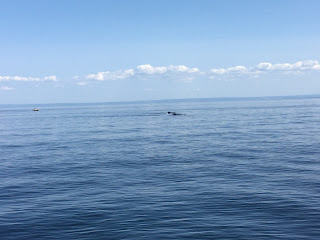 This one I took of 2 humpback whales that can be identified only if the picture is greatly enlarged.  The curve of the fin it the identifier for species. 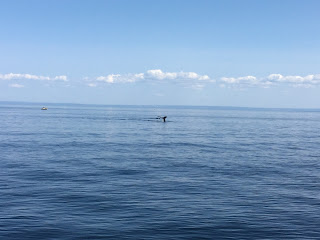 This is a tiny whale tail shot as a humpback dove.  We didn’t catch any breeches but we saw plenty of whales.  Besides what is in these pictures, we also saw some fin whales, harbor seals and grey seals.   We even saw an occasional loon.  What a thrilling afternoon for us.  We did have one moment of minor panic when a Parks Canada boat came up to us and indicated they wanted us to slow so they could talk with us.  We thought we had broken some rule and were headed for trouble but all they wanted to do was give us a friendly summary of their rules which we already knew and were following.  So the afternoon was a success and we added 25 more miles to our travel log! 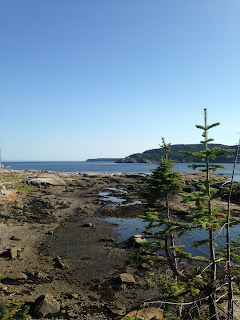 After our whale watching, we all spent the late afternoon doing what we wanted and as always, I was in need of more walking.  I found two trails to explore and took some photos of this gorgeous area. 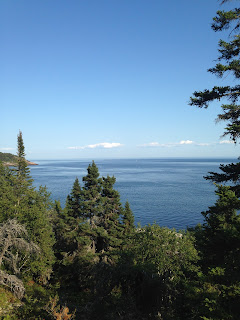 Just think of how many whales are out in that water with babies in tow. 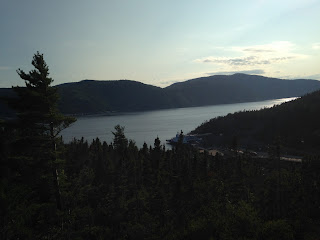 I walked up around 250 steps (I had trouble keeping the count going) to reach the top of a trail which afforded views up the Saguenay. 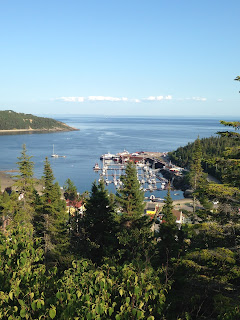 On the way back down toward town, this was the view of our marina and the whales breeding ground.  Monday night, we had a nice dinner on board after drinks on the flybridge and had a quiet night.  Tuesday morning we took it slow and relaxed and walked. 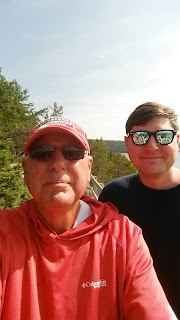 Al and Erik walked one of the trails that I had explored the day before.  I went further up into town to see some of the homes along the water, deciding which one we could live in someday!  We untied and left Tadoussac around noon with Erik at the helm and began our 26 mile cruise up the Saguenay.  It was cool and clear, a perfect day to explore this lovely fjord. 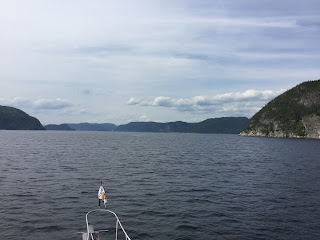 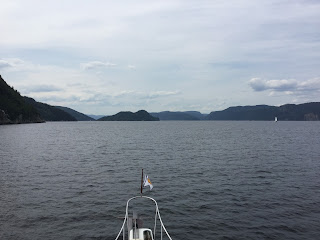 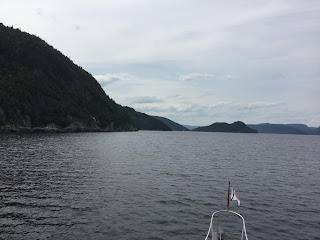 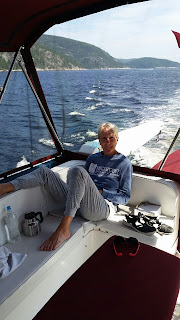 Having 2 captains on board, allowed the first mate to sit back and warm up in the sun while taking in the breathtaking scenery.  We had in advance, called the small marina in Anse St. Jean to be sure we could use a mooring ball.  I had help with the call because French was all that was spoken at the marina so I did not have first hand information about the logistics of the area.  We approached the marina and saw no moorings and no one answered the radio hailing.  Eventually someone on the dock heard the radio and in partial English tried to give us directions to the moorings.  Apparently no one was actually working at the marina and our helper was someone on a boat.  After 30 mins of poking around, we finally spotted a mooring ball and then found all 10 of them on the opposite side of the harbor from the marina.  In the mean time, a loon was spotted a few times!  We finally got a line through the pendant and were secured for the night.  We had a special dinner of crab cakes we had shipped from the Chesapeake and an enjoyable evening in a beautiful setting.  Our plan was to stay up on the Saguenay for a second day but the weather forcast changed that.  With possible high winds, we departed the mooring at 7am on Tuesday and headed back down the Saguenay. 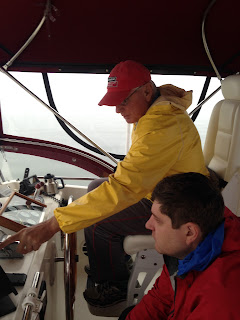 It was cold and rainy and as the morning progressed, the fog set in.  It was a time that all 6 eyes were glued to the waterway to look for other boats and channel markers. 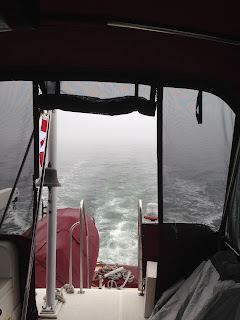 By the time we were out on the St. Lawrence the visibility was down to about 1/10 of a mile.  We actually saw some whales close by but by the time we saw them, they dove to get away.  Ironically the water was like glass and the predicted wind did not materialize, thus the fog stayed with us.  We decided to go 69 miles to a marina at Cap-a-l’Aigle (we still can’t pronounce it right!) so we could have a shorter cruise to get Erik back to Quebec City.  With varied currents as the tide changed, we had some slow travel and then picked up speed as we went west.  It was not the most pleasant day to cruise, but we were grateful for calm seas the whole way. Our entry into the marina was easy and eventually the rain stopped.  I walked up the very steep road to see what was around the area and found a few houses and a few inns. 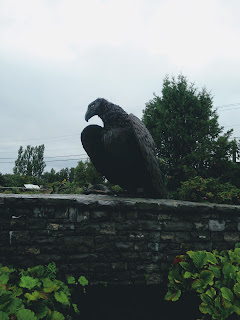 I also came upon this detailed bronze statue of an eagle, the namesake for the area.  That night we had hot showers and dinner on board and Erik treated us to the movie Cocoa that he had downloaded onto his computer.  Al and I never think to do cool things like watch movies on a cold night! 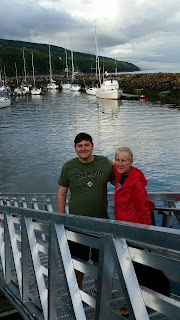 Al took this photo of my boy and I after taking our showers and heading back to the boat.  The marina is well protected by a high wall of rocks to make for a quiet night.
Cruising back to Quebec City meant for more slow speeds due to the strong current of the St. Lawrence so we were up early again for a 7am departure.  Our speed varied from as slow as 4 mph to 13 mph when the tidal current gave us a push.  We had another mixed day of smooth water and then 1-3’ rollers that we plowed through.  Erik had the helm most of the day so Al had a rare opportunity to relax in the salon part of the afternoon.  It was sunny and cool most of the long, 82 mile trip back to Quebec City.   Erik had a bit of a stressor when we came upon kite and wind surfers flying across the St. Lawrence main channel without a care in the world and completely oblivious to our approach. He gave them a few long blasts of the horn and they scattered to let us go safely by.  Another irony as Erik called them idiots and then I reminded him of all the edgy things he’s done in his past.  He got a chuckle out of that!  At last, we made it into the lock at the Old Port Quebec Marina and we were  tied up by 5pm.  Erik had a tense moment spinning the boat 180 degrees for a port-side tie with tourists and boaters watching his performance but he did it perfectly and we were done with long cruises for a few days.  So having an extra captain on board lead us to 327 miles of cruising over a 5 day period.  That was more than we have covered the whole time we’ve been in Canada, but it made  for a great family vacation for us!!