Montreal, the City of Food!

It seems that Montreal has more restaurants than local people and they are packed day and night with international tourists!  What a busy and vibrant city.  Who knew that Montreal was an island?  We arrived on Tuesday 7/31 after going through the commercial locks so our 37 mile cruising day took 6 hours.  Based on what others have reported, we had a fairly efficient locking day.  The cruising on the St. Lawrence was uneventful and took us into one of the widest parts where it spans 3 miles of width.    After getting properly tied to the dock, we set out to wander the Old Port City.  I was in search of Creperie Chez Suzette after doing some google and TripAdvisor recon to find the best restaurant for crepes.  That would be the breakfast spot for the next day!  Tired from locks, cruising and currents, we ate on the boat and just relaxed on the flybridge to watch other boats go by.  Plus there was plenty of music wafting from nearby restaurants and the Quay (pier) next to our marina to keep us entertained. 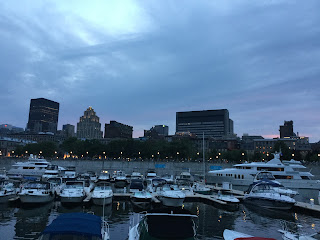 As the sun set behind the city, the lights brightened the sky.  Our marina was right in the heart of the Old Port City.  Wednesday morning was another adventure in French cuisine! 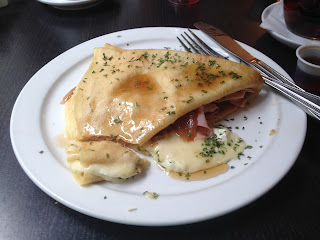 I had crepes with ham, Brie cheese and carmelized onions, topped with real maple syrup!  I got through about a 1/3 of it and had to stop because it was so rich.  Al had crepes with eggs and bacon that was not quite so rich.  We worked off our meal with some more wandering around the old buildings in the Port and passed the Notre Dame Basilica which stands behind the Maisonneuve Monument to honor Montreal’s founding father. 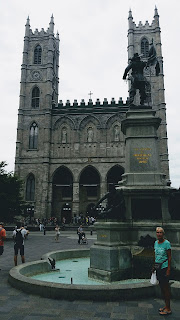 Note the overcast sky which kept the heat away thankfully!  The afternoon was a mix of time on the boat to write the previous blog post for me and more reading about upcoming cruising waterways for Al.  Then we ventured out to find the IGA and got some exercise plowing through throngs of tourists.
We had a need for pickles and fruit which called for the walk to the grocery! We ate on the boat again and waited for the Italian entry for the International Fireworks Competition of Quebec.  This is a competition between countries that occurs most Saturday and Wednesday nights in July and early August.  We were glad to make it to Montreal for the second to last fireworks display. 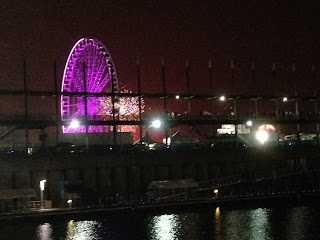 But we were disappointed that, despite what others told us, the viewing from our flybridge was not very good and we watched all of the explosions of lights through the lit carousel. 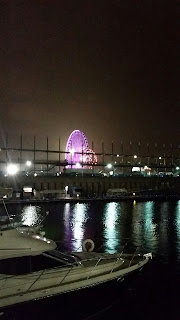 The fireworks never got above the giant carousel and we also couldn’t hear the music that accompanied the display.  Lesson learned, we should have not been lazy, as we could have walked to a much better viewing area nearby. 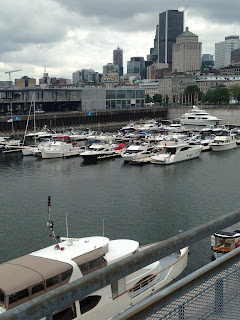 Thurday morning was a slow one for us.  We got our daily walk by walking along all the piers which weren’t as crowded as the city streets and gave us nice views of boats while benefiting from the breeze off the river.  Another view of our marina with a Ft. Lauderdale mega yacht on the far wall.  InSpeyered 2 is no longer the prettiest boat in the marina as we are competing with 3 mega yachts. I scheduled myself for a tour of the Notre Dame Basilica which I thoroughly enjoyed.  Al opted out. 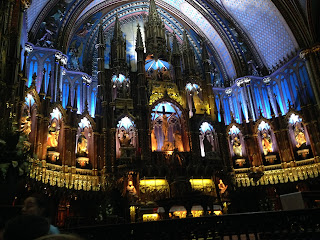 This is as lovely as any grand basilica in Italy or France. 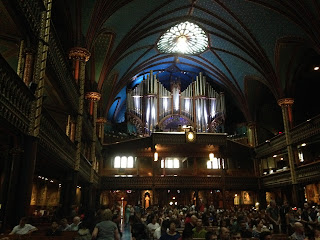 And unbeknownst to me ahead of time, there was a free concert performed on the grand organ just as the tour was ended.  Part of the tour was going up to the choir loft and seeing all the pipes of the immense organ.  Sitting in the pews of this ornate sanctuary with the massive sound of the organ was quite amazing.  Even though the sound was loud, it was soothing and clear.  Al missed out!  He spent his time napping and scoping out the best Mexican restaurant in Montreal.  He picked La Capital Tacos which of all places, was located in China town.  The tacos were edible but Mexican in China town, in French Montreal, Quebec, Really?! Might be the Captain’s last time for picking restaurants!
So the next day’s adventure was my pick and we trekked about 3 miles to find the Atwater Market. 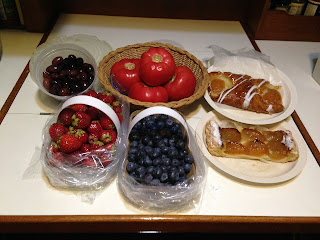 The market was partly outdoors and partly indoors and had everything to offer from cheeses and meats to fresh produce galore!  It was actually beautiful to see all the colors.  Neither of us thought to take pictures so here is what we bought and brought back to the boat.  Plus we had a nice lunch there.
Those strawberries were local and absolutely delicious.  The pastries were not as good as what we  had in Westport so the quest for flaky pastry is still on!  We had the return trip that we originally thought would be done by bus but Al got a burst of energy and so we walked.  But we were both exhausted by the time we made it back with our purchases.  (Not everything made it into the picture so our bags were a bit heavy!) Al found the energy to head back out one more time to buy take out poutine and smoked meat after carefully researching where to find the best and once more he was snookered and the place he picked was virtually empty, likely because there was a better choice somewhere!  But he ordered his food that is one of the things Montreal is known for and was disappointed in his greasy meal.  But really, French fries with cheese curds, covered in gravy with smoked brisket in a box, doesn’t sound even edible to me!! Maybe I’ve helped to change his palette!
We did have a delightful petit dejeuner on Saturday morning of fresh berries, nice Greek yogurt and our pastries, soo french and soo fresh!  The clouds moved in and it lightly rained as we walked the quays which was fine by us!  When we got back to the boat, the rain picked up and it was stay put time.  So Al got to work and did engine room maintenance.  When the rain let up, I trekked out with the mission to find take out dinner for the night. 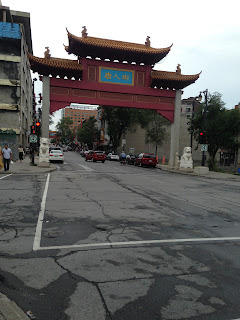 I started in China town, thinking I would find delicious Chinese food.  There probably was some there but it was difficult to read menus in french and I was turned off by the tiny, not so pristine places.  It was fun to watch noodles being made!   Plus China town was full of young people dressed in costumes from European and Japanese comic books that were fun to watch as well.  I was told it was a convention similar to our Comicon. 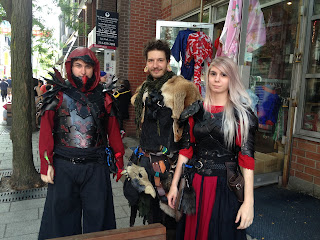 Not just the ordinary kind of costumes!  I finally found our take out dinner at the old stand by, Creperie Chez Suzette and we had more authentic french quiche with salad and enjoyed more time on the flybridge watching boats go by! 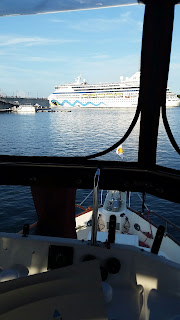 This cruise ship was on its way to NYC via the St. Lawrence to the coast of Maine, on to Boston and then the big city.  For us, we’ve had enough of a city so on we will go.  After another walk on the quays, we untied and headed out with the current behind us, pushing us along. 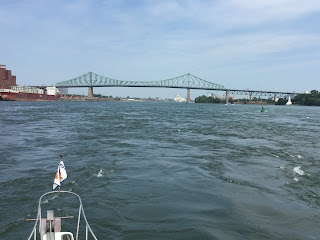 We left Montreal on Sunday, 8/5 and cruised 32 miles with the current on the St. Lawrence to a quiet anchorage in the Contrecour channel. 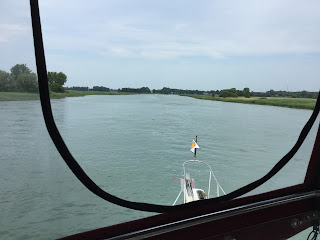 Here we entered the channel which is well marked and stopped between the town of Contrecour and the Isle Devant de l’Eglise or the Island in Front of the Church.  It was a hot day, so after the decks were swabbed with river water, a cool swim was just perfect! On Monday, the daily walk was on town roads and around a park in Contrecour with yet another run to the grocery. When we got back to the mother ship, we noticed weeds around the anchor chain, and this is what we found! 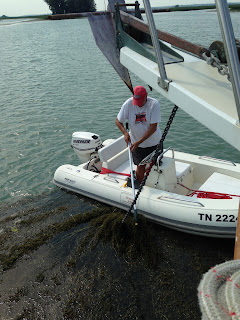 Al worked some magic with a boat hook and eventually the anchor chain was free from the flow of weeds and on they went with the current to wrap around some other object in their way! 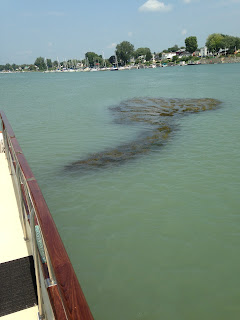 It’s easy to see where the name of the island came from when the view from our boat has this lovely church spire front and center in the town. 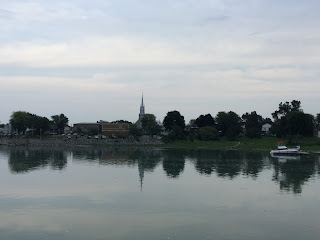 A brief storm left some clouds to create another beautiful sunset for our enjoyment. 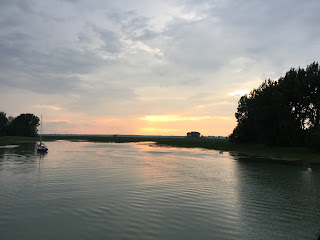 This was a very nice and quiet 2 night stay; an anchorage worth returning to some day.