Time With a Special Guest on Board

We had company coming for a 4 night stay on Wednesday, 8/8 so on Tuesday we enjoyed our quiet anchorage at Contrecour for part of the morning and then pulled the anchor to head to a marina on the Richelieu where we planned to meet up with Al’s sister, Joanie.  We felt lucky that the anchor weeds from the day before did not collect again so no “tree” came up with the anchor.  But the windlass groaned with the weight of the anchor because it was caked with thick, sticky clay that reminded me of baby poop back when we had diaper duty (nothing a copious amount of water couldn’t handle!) 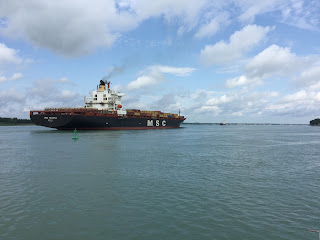 Back on the St. Lawrence, we had plenty of commercial ships around.  This big boy passed us in a narrow channel so you might notice the green buoy to its starboard which means we were outside the channel to give him plenty of room. 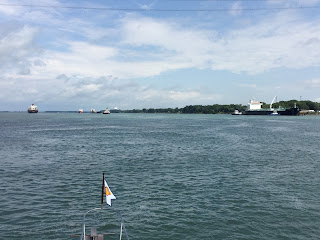 As we approached the Richelieu, we found ships going both directions and some on anchor waiting for their turn to unload.  We had a 25 mile journey, 8 of which, were on the Richelieu. 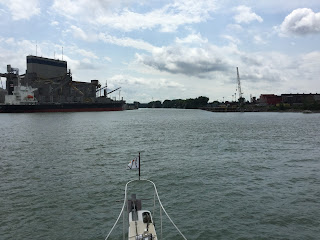 A turn to starboard put us into the mouth of the Richelieu at the town of Sorel-Tracy which is an industrial area. 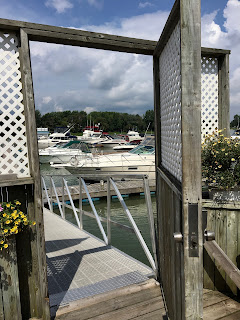 And here we sat for 2 nights in the Bellerive Camping Marina which is what it sounds like, a big, fancy campground with a marina which has a nice spacious parking lot so Joanie’s car could sit safely for the 4 nights she stayed on board. InSpeyered 2 was shamefully filthy inside and out so we spent Tuesday afternoon and most of Wednesday giving her a proper scrub.  Al took the outside and I did the inside.  It was great fun when Joanie arrived as planned on Wednesday afternoon after she spent extra time passing through customs. She had agreed to do us a big favor by transporting several Amazon orders and 5 new, replacement Kidde fire extinguishers.  That took some explaining to the customs guy so as to avoid paying tariffs!  And she also brought us more than 2 lbs of fresh, picked, Maine lobster for our combined birthday dinner.  (Her b’day is in June and we have July b’days).
BTW, the artsy photo above of InSpeyered 2, framed by the dock door was taken by the talented photographer, Joanie Speyer! 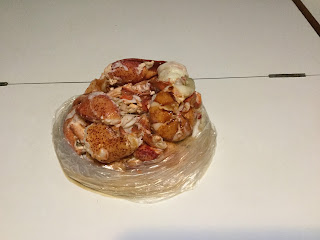 We had this much succulent lobster left for a second dinner and a few lobster roll lunches, yum!! 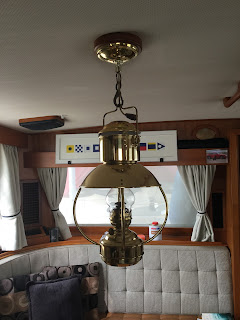 Look, we have a new lamp to replace the nasty old tarnished one that came with the boat.  The one we have spent hours trying to shine with no success.  Joanie brought this as a special gift as it had been a gift to her late husband, TR and hung on his wooden sailboat for years.  So now this lamp has a new home on InSpeyered 2 and will serve us in honor of TR and his love of boats and sailing.
Joanie had not cruised with us on this boat before so we chose to go up the more scenic Richelieu before going back out onto the St. Lawrence. 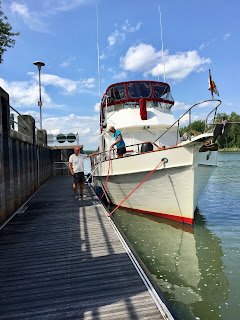 After a slow morning on Thursday, we went a whopping 5 miles south to the first lock and chose to tie up to the floating dock on the wall rather than locking through.   As luck would have it, it began to sprinkle just as we untied from the marina and we traveled through a heavy downpour most of the way! It cleared for us in time to tie to the pleasant St. Ours lock dock and take a nice stroll around the lock and dam.  Joanie enjoyed taking pictures of boats locking through as the afternoon progressed.  The rain cooled the air so the evening was lovely for drinks on the flybridge and we all slept well with windows wide open and even used a blanket! 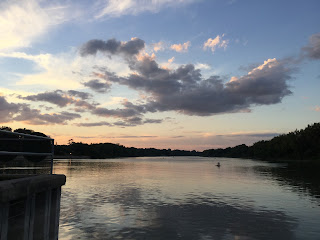 We had just enough cloud cover to create another delightful sunset. 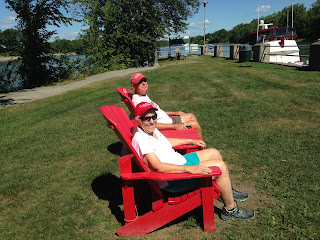 Friday 8/10 we woke to a cool, blue sky day.  Our plan was to head to an anchorage so we all took walks to get the daily exercise.  Al and Joanie walked a bit less than me so they had a few spare minutes to enjoy the red chairs that they both admired! (It’s a family thing to like red things!!). We untied lines and the Captain did a 180 turn to face us back down the river and on we cruised 27 miles  which included 12 miles of the Richelieu and into the St. Lawrence. 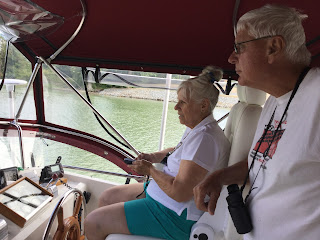 Joanie got some driving lessons using Mr. Auto and the remote while we were still on the quiet Richelieu.  Her decision was to give the helm back to her brother and enjoy her hobby of picture taking.  Our chosen anchorage was in the archipelago of Lake St Pierre which was comprised of many islands of marshland with trees and a smattering of fishing cottages accessible only by water.  We anchored in the Chanel Isles aux Sables. 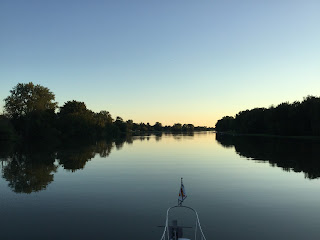 As the light dimmed, this was the view from the bow and later as the sun set we had a soft sunset off the stern. 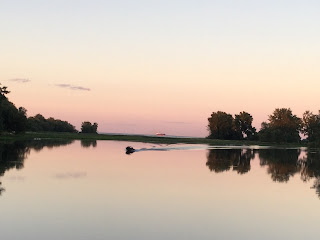 Off in the distance is the St. Lawrence shipping channel where we saw many commercial ships plodding along their 24/7 route until they reach their unloading destination.  This was a peaceful anchorage but lacked the expected bird watching opportunity.  It was another cool night for comfortable sleeping with blanket coverage! 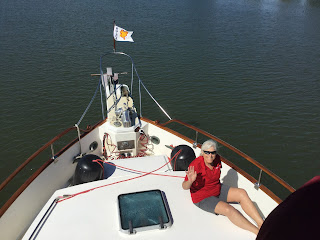 Joanie only had planned for the 4 night stay and had a 6 hour drive to and from home.  So we decided to up anchor on Saturday to return to the St. Ours Lock wall to be close to the marina for a Sunday drop off by noon so Joanie could drive home before dark.  Joanie hung out on the bow to see how the anchor pulling process was managed and brought some good luck as the chain and anchor came up clean for a change!  Saturday’s cruise was breezy and the cloud cover made for a cool ride back the way we came. 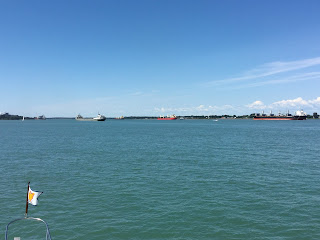 Being a weekend day, we saw lots of boat traffic from small to very large! 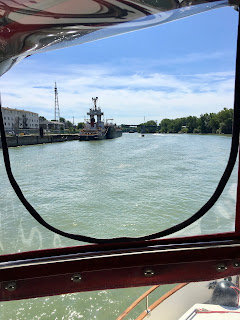 Joanie took this well framed shot as we entered back into the Richelieu with Sorel on our port and Tracy to starboard.
We returned to the lock wall by mid afternoon and enjoyed watching the copious amount of boats locking through.  After our cool, comfortable cruise, it was unexpected to find the breeze and cloud cover had disappeared so it was a hot afternoon.  The daily walk still took place but was a bit less pleasant.  And the flies drove us nuts so a few saw the end to their short lives!  I got the prize for killing 2 in the galley with one whack of the swatter! 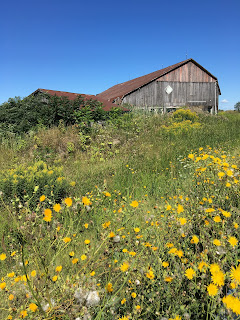 Joanie and I walked the same country road and we both passed this barn and all I saw was a building falling apart and a mess of weeds and through her camera lens this is what Joanie saw!  The true eye of a photographer at work!   So after one more pleasant night together, we untied on Sunday and pulled into the fuel dock of the Bellerive Marina.  Not thinking about it being a Sunday, we were taken aback at how busy the fuel dock was.  So unloading Joanie’s things and the old fire extinguishers (that needed to be returned to Kidde), getting everything up the steep ramp to the parking lot, saying good bye and taking on 300 liters of diesel was a very hectic and hot ordeal!!   Al and I voted to head back into Lake St Pierre and find that quiet anchorage. 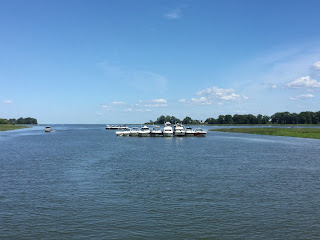 We chose one just one channel over from the previous one and joined a string of 5 boats “shoulder to shoulder “.  But then more boats came in and they gradually turned into a large group of very noisy, Sunday boaters enjoying the beautiful day with loud music and lots of laughter.  Nice for them but a big bummer for us!  All day we hoped they would only be “weekenders” and by 6pm our wish came true as they peeled off, one by one, and hollered to us “you have a beautiful boat” mostly in French!! 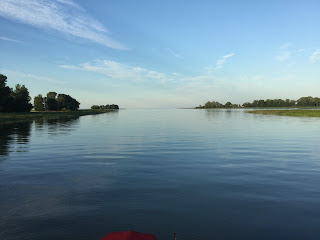 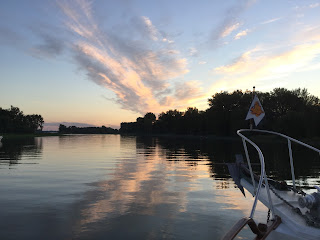 A beautiful sunset after drinks on the flybridge never gets old!
We indulged in a 2 night stay and enjoyed a very quiet Monday doing some reading, some cruise planning and a few chores.  The swim platform even got another coat of teak oil.  We barely even heard a bird chip! 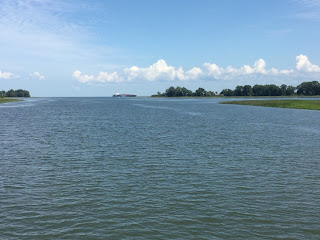 Watching ships pass out in the St. Lawrence shipping channel added entertainment to our day. 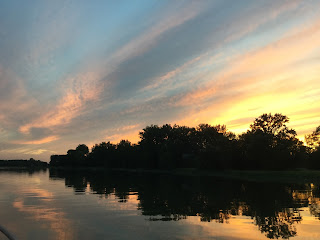 And once more, we enjoyed watching the sun set peacefully into the glassy water.
Tuesday 8/14 we began our 2 day cruise to Quebec City.  Up until now, we’ve had no tides to monitor and currents that only pushed us along.  But there is up to a 15’ tide change in Quebec City, so as we cruised further down river and passed Trois-Riviers we started to experience currents that were related to the St. Lawrence River flowing steadily to the sea and the ocean waters pushing up the river as the tide raised.  We had both a marina reservation for Portneuf and had picked out a closer stopping point if needed at an anchorage.  But we timed our cruise just right and had current pushing us along until we reached a speed of 16 mph (our norm is around 9mph) so we made the 71 miles to Portneuf in only 6 1/2 hours!  A record for us!  The day was cool and over cast until we pulled into the protected basin of the marina. 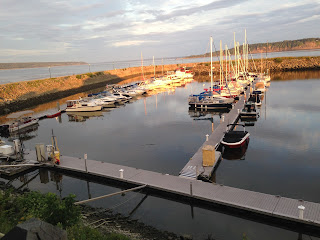 The wall of rocks was nice to block wave action but it also eliminated all the breeze and focused the sun down on us which made for a very hot afternoon in Portneuf!  The tide change here is 12’ and we got there as the tide was lowering.  Just before this marina is an area referred to as the Richelieu Rapids so with the natural St Lawrence current and the tidal current flowing out to sea, we had a fast and squirrelly ride through the rapids.  Mr. Auto did a wonderful job and Al kept us steady, but my stomach was a bit queasy!  We had poor electric from the marina so laundry was done on shore and not a fun experience hauling it from and to the boat with the hot humidity.  But it did get done, along with a walk to town to explore and exercise.  Some fresh local strawberries and tomatoes made the walk worth it.  And we indulged in a delicious dinner at the restaurant above the marina, La Perle du St-Laurent, a 4 star eatery. On Wednesday 8/15 we will have a relatively short 38 miles to get to Quebec City.  We’re looking forward to that part of the trip because Erik is flying into Quebec City on Saturday 8/18.