Saturday 7/28, began on the free wall at Hawkesbury.  Hard to believe with all the extra grocery stops that we actually needed some fresh fruit and veggies, so the morning walk took us across the Perley Bridge into the town of Grenville where a large IGA was just waiting for us to buy some groceries.  Hawkesbury lacked a good store.  That accomplished, we untied and cruised 11 miles to the 65’ Carillon Dam which is a busy dam most days and crazy busy on weekends.  The weather called for comfortable temps and minimal chance of rain. 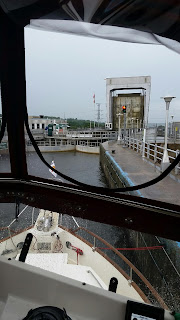 But as Al says frequently, prediction is prediction, actual is actual.  Actual weather brought on a pop up storm with wind, heavy rain, and lightening just as we arrived at the lock which was closed with a red light.  That meant we had to tie to the wall at the blue line to wait for the lock to open for us.  We just missed an opening as there were boats heading down which meant we had to wait for their lockage and the one for more boats to be brought up the lock.  So we waited 1 1/2 hours for that process before we could lock through ourselves.  We should have gotten an earlier start, oh well!  As we waited more boats joined us at the wall. 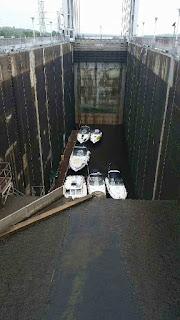 Al got off the boat during the wait and took pictures of the boats coming up.  For me, waiting was a bit worrisome since it’s a different type of lock and I had time to stew.  But it turned out to be one of the easier lockages. 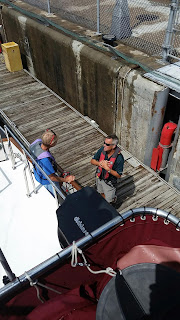 Nice lock workers stand on a dock inside of the lock and grab lines and tie everyone up.  We were the biggest boat and first in line, so we didn’t have another boat raft up next to us.  The French Canadians  refer to rafting as  “tying to your shoulder”.  I spent the time for the lock to lower the water chatting with, what I assumed was the lockmaster.  He was interested in our boat and hearing about looping.  So we invited him to visit with us at the end of his work day to tour the boat and get a lesson on using Active Captain.  Another new friend that we may see someday as he passes through Nashville on his looping adventure.  We exchanged contact information for future use. 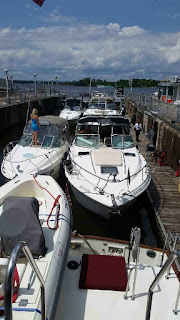 The boats behind us in the lock did have to tie up to each other’s “shoulders”.  But for a Saturday this was not a full lock. 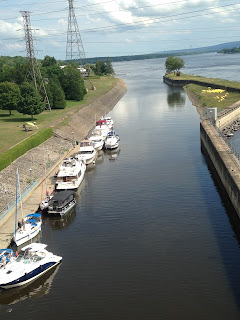 We were extremely lucky that a boat moved some to open a spot for us to tie up on the wall below the dam.   We were the last boat to find room.  No electric or water on this wall, but there were friendly people and a nice place to walk around. 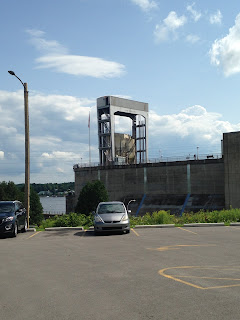 The Carillon Dam is unique with its guillotine type door on the lower side which raises above the lock to open with the use of a counter weight so a small 40hp motor is all that is needed to raise this massive door. 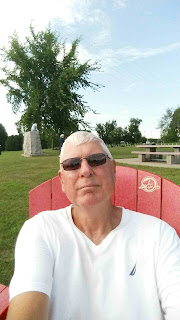 The Captain enjoyed his walk around a park next to the wall where he found nice chairs for viewing the river.  I met another looper boat and chatted with them as they waited to go up in the lock.  Most loopers we’ve met are going in the opposite direction of us. 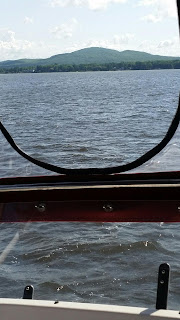 Knowing that Sunday 7/29 was not the best day to go through the very busy Sainte-Anne-de-Bellevue lock, we agreed to just wake up, untie and go straight to the lock.  Breakfast was eaten on the flybridge while underway.  It was a cool morning with some clouds to give respite from the sun.  This area has pretty rolling hills and distant mountains.  It was a good day to be cruising the 26 miles to the next lock but there was plenty of Sunday boat traffic.  The wind picked up so it was difficult to tie up at the blue line to wait for an opening, but a nice man, who seemed to be a tourist at the lock, bailed me out and caught my lines.  Trying to lasso a short cleat in the wind is beyond this first mate’s skill level!  We were lucky at this lock with a short wait for it to open and spill out the numerous boats that were packed inside.  We were first in and this time did have a cruiser tie to our “shoulder” which is a new experience in a lock for us.  But the lock workers made it all very easy and the ride down was only a short drop. We were lucky again, to find plenty of space on the wall for a two night stay so we were tied up by 12:30.  The boat traffic flowed strongly all day so at times, the 2 walls in St. Anne-de-Bellevue were full with some boats rafted to each other and then spots would open up as boats moved on. 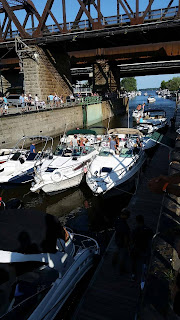 Al enjoyed taking videos and pictures of the locking that went on all afternoon.  This town was alive with plenty of boaters and tourists watching boats pass through the lock.  We found a good place for a late lunch and then we split up for Al’s picture taking of the lock action and my walk around a quaint neighborhood.  Al’s videos of the busy locking day can be seen on his personal YouTube channel. 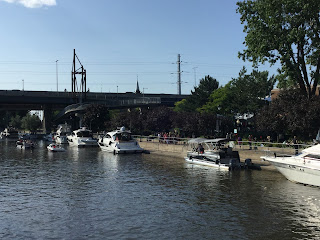 As the day progressed the music and people noise increased.  There were performers along the wall entertaining all and plenty of drinking toward late afternoon.  Al’s videos are full of bikini clad young women dancing on their boats as they locked through!  We had lots of people walk by our boat and take pictures of themselves in front of her.  There were loads of comments on how beautiful she looks!  We even gave 2 groups of people a tour of the inside, just because they were so interested in the different looking trawler.  It did quiet down once the lock closed and we had a quiet night.
Monday was not nearly as busy with tourists and boats but there was still a steady stream of boats locking through.  We used the time on Monday for a few boat chores and a visit to the local bibliotheque to use the wifi and printer.  The next two locks are on the mighty St. Lawrence Seaway and are big commercial locks that each cost $30 Canadian.  We paid for them online and printed our tickets to make the locking go smoothly.  BTW, one of the boat chores was checking strainers for the engines and refrigeration and they were half full of weeds, likely picked up on the Rideau.  Important chore to keep those strainers clean as the water flow to cool motors/engines is critical!   We finished our Monday with a very good seafood dinner at Pete’s Cape Cod which claimed all the seafood they served came from the Cape.  The scallops and tuna seemed Atlantic authentic!
Tuesday was the day to go through the two commercial St Lawrence locks and they both have to be done in one day.  There is no where to stop in between.  We had a phone number to call to check on estimated times for pleasure craft to lock through.  Their priority are the commercial ships so two, one hour windows are identified for pleasure craft but the times are frequently subject to change.  The first lock for us was the Saint Catherine Lock and the first opening was slated for 11 am.  We untied and left before breakfast to give us 3 hours for the 24 mile cruise.  We arrived 15 mins ahead of schedule and then floated around waiting for the lock to open. 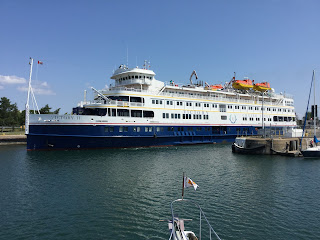 An hour later, this cruise ship exited followed by 8 or 10 small cruisers and we were finally allowed to enter.  The dock for waiting was small and already had 2 boats so our waiting time was spent idling around the basin above the lock. 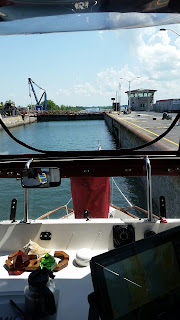 These locks are very big and the first dropped us down 32’.  There is nothing on the wall to fasten to because they hand each boat two lines to play out slowly while lowering.  Even though these locks are huge, they asked us to allow another cruiser to raft to our port.  It was a bit tricky to play the bow line out for me with the pull of the other boat and the push backward from the water flow.  I managed but was a bit nervous through the process.  Al handled the stern line just fine.  We repeated this process for the second lock, St. Lambert which is 10 miles away from the first lock.  These two locks make up for the rapids that are around the south shore of Montreal.  To get around the rapids, they created the Canal de la Rive Sud so the travel between locks was via this canal.  Coming out of the canal brought us into the turbulent water of the St. Lawrence.  To get to our marina, we had to head into the current so we went from 11 mph to 4 mph and for about 2 miles it was squirrelly driving for the Captain. 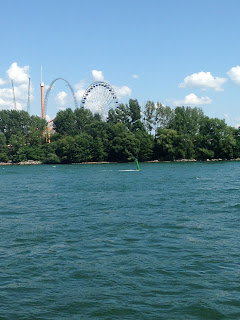 Look at the current rushing past the green buoy that is tilted from the force of the water. 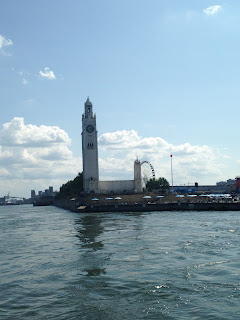 Almost to the basin for the Port d’Escale Marina where we will stay for 4 nights to explore Montreal.
The locks are behind us for a few days of city life.