We Love the Southern Half of the Rideau Waterway!

After leaving our anchorage in Morton Bay on Sunday 7/8, we meandered a little over a mile until we got to the wall at Jones Falls locks.  When the lock gate is closed, we have to tie up at a wall painted blue and that indicates to the lockmaster that we want to lock through.  No radio calls or lights as signals, just old fashioned ways to communicate.  We’ve been lucky with not much waiting time so far but that day we waited around 2 hours because several boats were just beginning locking down the flight of 4 consecutive locks.  Then a single boat was locked down on it’s own because they had battery problems and needed to leave the engines running through all the locks.  No other boat can be in the lock if the engines are running.  So they did a “double down” and we just sat and patiently waited.  But the bummer was that 2 more big boats joined us so our lockage up was another tight squeeze. 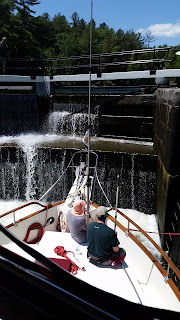 The lockmaster was skeptical about us all fitting together in these relatively small locks but we let him know that one of the boats was with us in the first flight of 4 and fit next to us with a foot or two to spare.  But I took advantage of his worry and suggested that, if he allowed one of his dock workers to join us and help me, then we could be more efficient and get right up to the cable next to the lock wall.  This was a new idea for him and he agreed and thus I had a helper again to reduce my stress and work load!!  Clever thinking on my part!  So this nice young man did the cable grabbing while I fed the line around it and Voila, it was much more easy!  He had a fun time as well since he had never had an opportunity to go through the locks by boat.  Win, win for all. 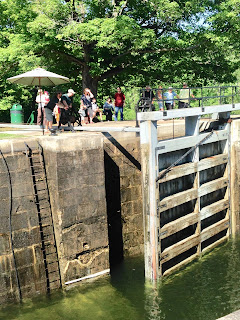 Adding to the mildly stressful work load in a lock is the constant audience of spectators watching and snapping pictures!  I handed out a few of our boat cards hoping someone would email a picture or two but never received any. 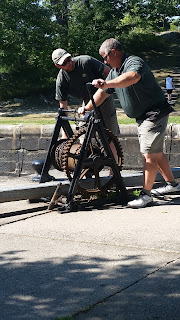 On these hot days, these lock workers work hard to operate the gates and the sluices especially in the multiple lock areas. 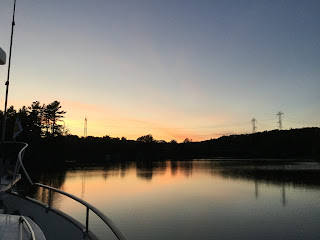 After making it through locks 42-39, we tied up at a wooden dock above the last lock and enjoyed walking around the 4 locks and visiting the museum created in an old lockmaster’s house. There also were the remains of a military fort that was built to protect the locks.  Those Brits were just so worried the freed, rebel Americans would mess with their canal passageway to Quebec that they spent a lot of money on protection and never ended up needing it.  So after cruising a whopping 2.6 miles and adding 4 more locks to the “done” list, we enjoyed a peaceful night and pretty sunset as the last day for me at age 63 came to an end. 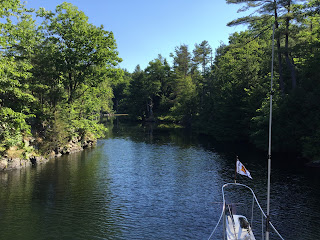 Happy Birthday to the first mate on July 9th!  We left Jones Falls and soon headed into this narrow section of the canal called the Quarters.  It was becoming another hot day but the burgee was fluttering  with the breeze.  We had 2 single locks to pass through and both were open and ready for us when we arrived.  Guess they heard about the birthday girl and made the day easy for me.  The Captain brought the boat in so smoothly both times (no other boats to contend with) that I easily caught the cable and threaded the line around with no stress or mishaps.  Our system is getting easier and more efficient. 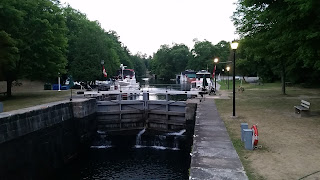 We went through locks 38 and then this one, Chaffeys lock 39 and tied up just past the lock wall in a good location to access the Opinicon Resort.  It is located on a lovely expanse of wooded lawns with cottages and the big lodge for vacationers and is dotted with red Adirondack chairs.  So after a hot walk, I found a nice chair in the shade, close enough to the lodge to use the wifi and wrote the last blog post. 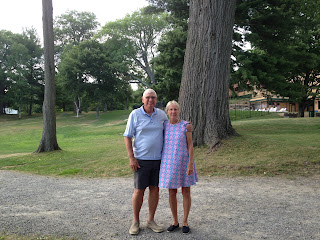 And then the Captain and I mostly enjoyed dinner at the Opinicon.  Nice to eat out, but the food was not up to our expectations.  They made up for it with a free desert for us to split that was a sweet, cinnamon apple, baked on a flaky crust and topped with a dome of white chocolate, that was devine!   While at Chaffeys, we met a couple from Ottawa and the man spent some time pointing out all of their favorite anchorages along the Ottawa River so we are more prepared for the next part of this voyage. 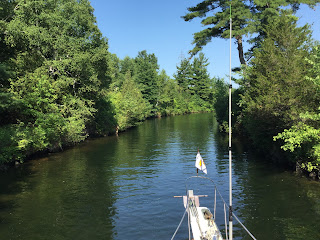 On the way to the next stop at the Westport Municipal Marina on July 10, we passed through this very narrow passageway to the Newboro lock 36.  This is the highest lock so was the last one we went up.  From this point on, we will be headed down toward sea level with the red channel markers on the port and green on the starboard. Can’t get those confused! 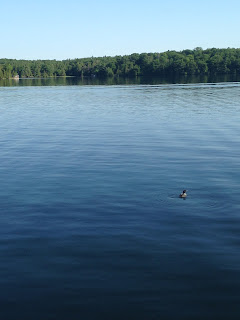 We then entered Upper Rideau Lake where we saw lots of loon pairs and some with babies.  My quest for a great loon picture is not yet met. This one will have to do for now. The trip to Westport was only 11.1 miles and with one easy lockage, we were finished for the day before 11am. 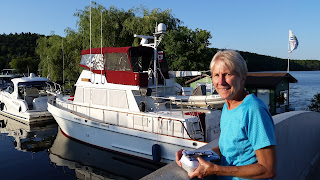 So after several Parks Canada walls without power, we tucked into this marina for good wifi, water refill, many loads of laundry, some shopping and best of all, a Good hair cut for this first mate.  Al got 3 “attaboys” after parallel parking InSpeyered 2 between that boat in front and a pedestrian bridge  to our stern with only feet to spare.  Nice location though for the wifi since the tiny marina office was right next to us.  While taking the daily walk, I got a call from the main office of the lock tenders on the Rideau to warn us that the water level on the south part was dropping and expected to go several inches below the normal level of at least 5’.  Back in Kingston, I read that the lock officials want boats to register if the boat draft is over 4’ and since ours is, I called to announce we would be traveling with a nearly 5’draft.  And it paid off since the office knew to call us with that warning.  Whew, we just went through the highest lock so going down, the water levels would be more than adequate and we had nothing to worry about. 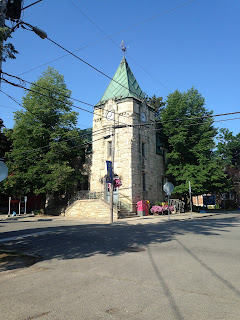 This is a great little tourist town, so it had lots of shops with some interesting gormet food to buy and a nice loon T-shirt for me.  Al also liked the well stocked hardware store so now has screws for the swim platform that are the right length.  Plus the crockpot died about a week ago so we replaced it via the hardware store.  (We are enjoying spending American money at the “Canadian discount”.  We’ve been gettting about $1.30 Canadian for $1 American.)  The picture above is the post office and it’s interesting architecture deserved a photo. 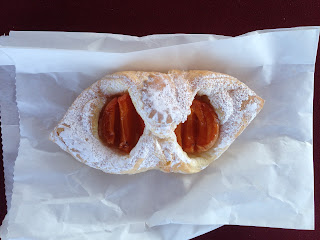 But this sweet treat deserved a photo even more!  The local bakery was wonderful and this is by far the best French apricot pastry eaten on this 3 year trip!  Went to the bakery twice to indulge.  On 7/12 we untied lines after walking and hitting a few stores for things not needed but wanted, we went through Upper Rideau Lake to the only lock for the day #35 and our first for locking down.  This is much easier because all we do is hand off lines to the lock workers and they wrap them around the cables and hand them back and we simply hold on.  We had a short wait and were joined by folks on a rental “Laboat” who seemed to lack boating experience. So after the lockmaster observed the boat coming up to the blue line in a poorly controlled manner, they decided to put that boat into the lock with lots of help ahead of us and for once we looked the the ones who knew what we were doing in a lock!  Experience helps! 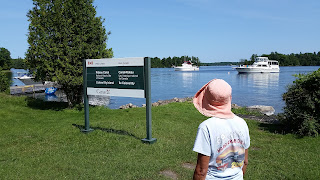 Lock 35 brought us to the much deeper Big Rideau Lake where we had up to 220’ of water below our keel.  Quite a change from 2-3’ on the southern section.  We caught a mooring ball next to Colonel By Island and settled in for a 2 night stay.  More loons on this lake to observe and hear mornings and nights.  The swimming was refreshing but I lasted only minutes in the less than 80 degree water!  Plus the air temps went down so the hot factor wasn’t an enticement to swim much. BTW, Colonel By was the chief engineer who supervised the making of the Rideau Canal so he is a favorite historical figure for us. 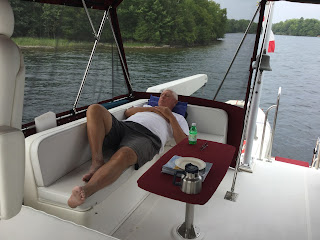 The Captain enjoyed a day off with no chores since we did it all at the marina stop. 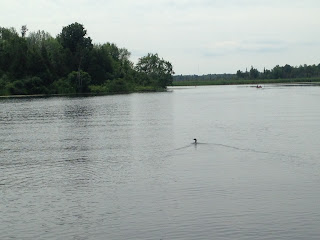 We used Victory Lap to visit the tiny town of Portland which coincidentally was on the same date this year that we visited Portland, Maine last year! Another town for walking and not much else but the dingy ride past loons was well worth it.  These are the days, swinging on a mooring ball (anchor will not have to be cleaned when we leave!) on a beautiful lake are the days we love the most.