Three Challenging Days to Get to the Chesapeake!


Alarms were set for 6am on Monday 10/1 but the Captain and I awoke on our own, anxious to get started on the Jersey run.  We had planned to untie at 6:30 but it was still too dark so we waited another 20 anxious minutes.  Our conditions were predicted to include 2-3 foot waves, wind in the single digits rising to 15mph mainly from the south.  We headed out and all was calm enough in New York Harbor. 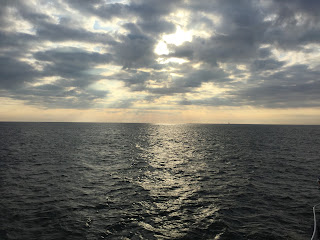 The morning was tedious but not uncomfortable.  We had some chop from wind on top of the rolling ocean waves but it was doable.  It was calm enough for me to go down below to get breakfast food but by lunch, I did a fast grab of crackers, cheese and things I could stick in baggies and put in my pockets to keep my hands free to hold rails while traversing across the deck.  But the day got more windy than predicted and by 1pm, we were both pinned in our seats to avoid sliding or falling. 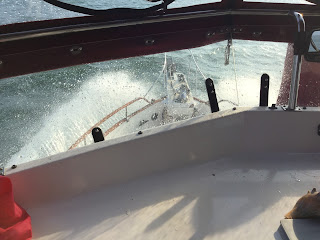 The good news was that the waves were hitting on the bow and at times more on the port bow but not slamming into the beam of the boat.  The bad news was that the predicted period of the waves was to be 10-11 seconds which is more of a rolling wave, but in actuality they were coming in 3-4 at a time with a few seconds between.  We figured they were 3-5 foot waves with some in the 6 foot category.  We have a bell on the flybridge that was ringing all afternoon!! 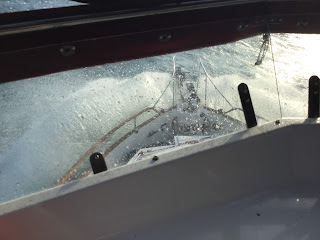 It was like riding a roller coaster and felt worse when we looked down the wave slope as we hit a crest.  I tried to glue my eyes on the horizon.  Luckily I never felt nauseous, only nervous!  Al handled the helm well with the help of Mr. Auto. 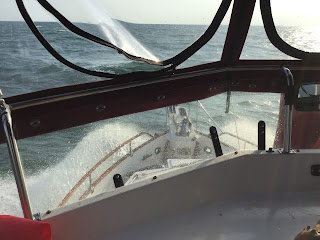 Note the partially opened window to allow for air flow to help me stay clear headed but it was fully opened earlier until a wave washed over the bow with such force that it doused my face and sweatshirt with fresh seawater right through the window!   So after 11 hours of cruising we pulled into Farley State Marina in Atlantic City and tried to unscramble our brains!!   We were exhausted from tension and the effort to tighten muscles to keep from rolling with the waves.  We had a quiet night and sound sleep.  Needless to say, we sat still for the day on Tuesday!  It was a beautiful but very windy day so staying put made sense.  We walked a couple of miles to a great little restaurant for a delicious and well deserved breakfast.  Then we filled the day, Al with engine room chores, me with salt removal from every outside surface of the boat.  It was interesting that several mega yachts came in late afternoon with professional captains talking about the rough seas they had, so rough that they stopped earlier than planned.  So glad we sat in the marina!
On Wednesday 10/3 we were joined by friends who live near Cape May, Joan and Matt, who have cruised the Atlantic plenty of times and who believed our conditions for the 44 mile ocean cruise to Cape May would be doable.  They and the weather sights were right and it was a tolerable day.  We had waves in the 2-4 foot range, rolling on the beam but they were indeed rollers, not fast, short period waves so between the distractions of friends to talk to and the help of Motion Eaze, the cruise went by quickly. 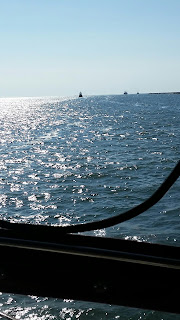 We followed these clamming boats out of the Absecon Inlet as we left Atlantic City.  We figured it was a good omen that the clammers thought it was a good enough day to go out and work! The next set of photos were all taken by Joan who has a good camera and an excellent eye for photography. 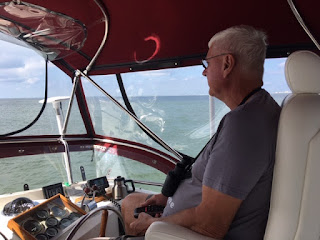 The captain was at ease with the auto pilot remote in hand. 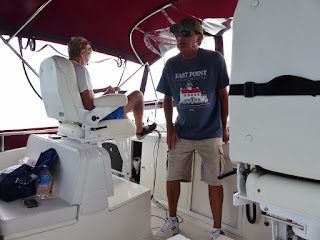 Matt used his eyes to help with the navigation while I used Aquamap on my iPad to follow our course and track the markers. 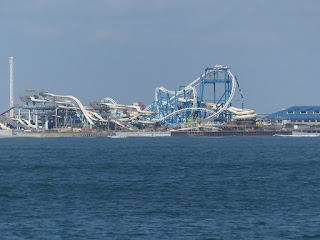 The rides of Wildwood!  This is the Jersey Shore that I remember as a kid! 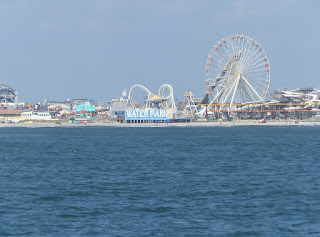 Not much action again until next summer when tourists will flock back for some fun. 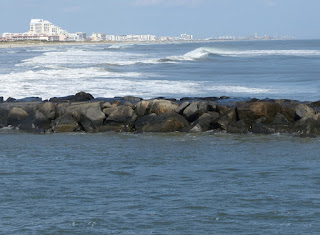 The breakwall of the Cape May Inlet, as we looked at the beach where our rolling waves were crashing into shore.  I guess we did have some wave action out there! 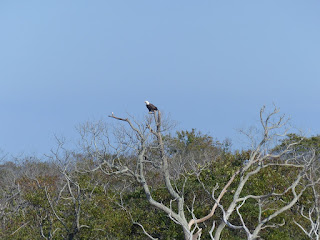 Then Joan spotted this eagle that greeted us as we ended our Jersey coast run.  We were tied to the dock at Utsch’s Marina mid afternoon so had time for a grocery run and then enjoyed fried scallops at the Lobster House to finish our day and say thanks to our friends, Joan and Matt who made the trip enjoyable.
On Thursday we woke up unsure about attacking the third part of the trek to get to the Chesapeake which is the Delaware Bay and River.  This part of the trip is a bit over 60 miles going up against the river current in a north westerly direction.  Timing it to have the rising tide along with you to counter the river current with light wind behind is about perfect.  Of course the weather sights did not all agree but we could get a sure read on the tide.  So after watching several boats take off and hearing from another boating friend (Jim on Leilani) who thought the conditions were good, we untied easily with help and headed out the Cape May Canal at 10:30.  It turned out to be a very easy, hot, no wind cruise with some tidal current helping along the way!  We had one small mishap, InSpeyered 2 ran aground near the end of the canal as we were getting close to the Bay.  A dredge was working the entrance to the canal and moved into the center of the channel.  So Captain Al did the prudent thing and pulled over toward starboard and found soft mud stopping our forward progression.  He tried to plow through but quickly realized that wouldn’t help so he backed off the grounding and freed the hull.  The dredge Captain hailed us immediately to say we should head right toward the dredge and he would turn to starboard to let us pass.  Whew, crisis averted!! 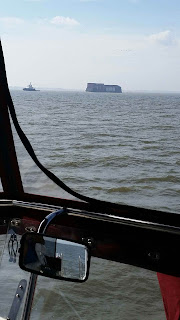 We passed only a few commercial boats and this one in the far distance looked like a city being pulled by the tug.   Calm waters were greatly appreciated!  We pulled into Delaware City Marina, thrilled to have all that challenging cruising behind us.  The Captain requested a day off on Friday so we walked the canal and had an excellent lunch at Crabby Dick’s.  Then it was on to the Chesapeake via the C and D canal for an easy 39 mile cruise with tidal current pushing us the whole way. 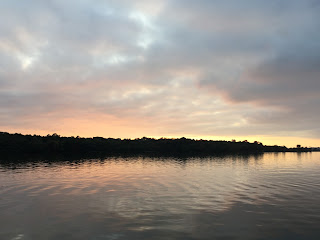 We anchored in Turner Creek Bend off the Sassafras River; an anchorage we have used 2 other times. We did run into some trouble with the anchor chain but it wasn’t a surprise.  With all the jostling from waves on the run to Atlantic City, the chain had become jammed and tangled.  We used Al’s brute strength and the weight of the chain being pulled against the boat’s momentum backward and pulled all the chain out of the locker, cleaned it all up as it was winched back in and easily set the anchor to hold for the night. As often is the case, anchoring provides beautiful sunsets.  So nice to be on the Chesapeake Bay again!  After going to shore for a decent walk on Sunday, we concluded that moving to a different anchorage would make sense to find stronger Verizon service.  We have some planning to do for a week long visit home.  We moved early afternoon in calm conditions across the Bay to the Magothy River and dropped anchor behind Dobbins Island.  That is where we have stayed for the past 2 nights and where we will be tonight. 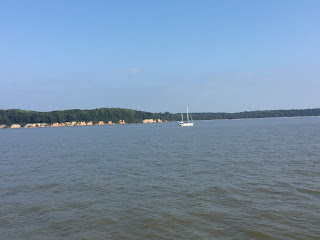 The rock walls along the Bay make for scenic travel.  Nice calm bay water along the way. 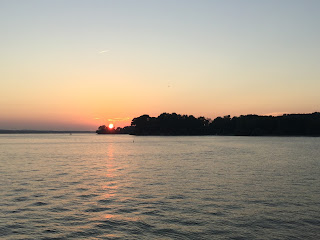 Sunset Sunday night in the Magothy. 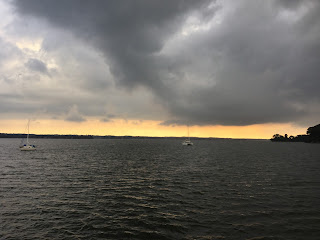 Sunset Monday night with heavy cloud cover but no rain.  Mornings have been overcast with fog, afternoons have been hot and clear and nights have been just cool enough to allow for comfortable sleep but not blanket weather!  We went to shore yesterday by tying up at a restaurant dock and had a good walk and then a late lunch that was quite tastey.  Today we used a marina dock and just walked a local neighborhood. 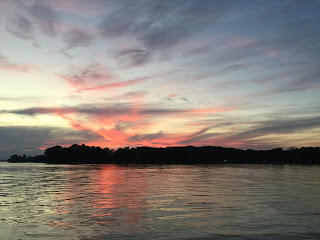 One last sunset to enjoy in this anchorage.  Easy walks, very quiet anchorage, no more running for a while, life is good for the crew on InSpeyered 2.