The Champlain Canal Takes Us to the Hudson River

From the town wall in Whitehall, NY, we started our cruise to go up the Champlain Canal on Saturday 9/22, which was a cool and sunny day.  More low bridges, so we lowered the mast with relative ease, got the pole set to measure our air draft and untied mid morning.  It was a slow 25 mile cruise because we locked through 4 locks.  When we were one lock away from ending our travels early afternoon, we got word that a barge had broken free from a tie up and had to be rescued by a tug so lock #7 was closed “until further notice”.   We waited 1 1/2 hours tied to an old dilapidated wooden dock with 4 other boats.  So late in the day we all piled into the lock and all but one turned into a creek just past the lock to find the free town wall of Fort Edward. It is another town with lots of closed businesses and yet it still provides a great place to tie up with free electric hookups. 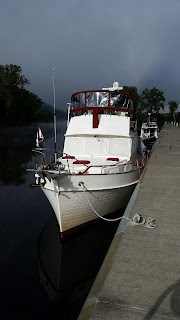 We tied near to a ladder so we could climb up and off the boat.  We met some new friends, Pat and Chip on Aerin E, the boat tied behind us.  This new friendship made our 2 night stay in Fort Edward quite interesting as Pat was previously a Grand Banks broker so she had a vast knowledge of boats and boating and Chip designed museums as his long time career and one of those museums is the Holocaust Museum in Washington, DC.  Their stories made for interesting conversation during docktails at a picnic table along the wall. 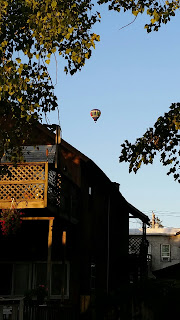 And unbeknownst to us, the town had a big hot air balloon festival going on that weekend so we had 25-30 balloons pass over us.  They were so high up that any picture of multiple balloons showed tiny dots but this balloon veered close enough to us to allow for a decent picture. 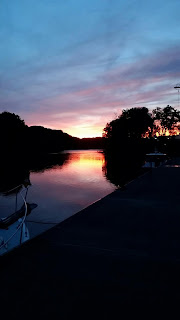 We were treated to a beautiful sky looking up the creek at sunset. Once the sun set, it was a very chilly night.  Sunday morning, I treated Al to a classic diner breakfast that was cheap and plentiful. It’s important to support the local businesses when they offer up such a nice “marina” wall. We  walked the town and happened upon a park where re-enactments of battles of the French and Indian War were occurring. 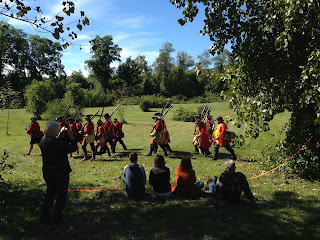 We only caught the tail end of them marching back from a battle.  But it was interesting to follow them back to their encampment and see how they lived for the weekend’s event. 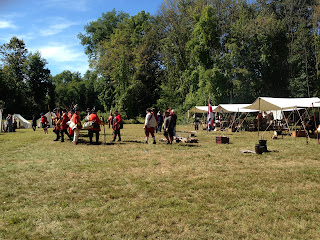 Other boats came in later in the day including a 72 footer that scooted in to a spot in front of our boat, just barely big enough for a boat that size.  That in itself was entertaining to watch!  We met some other folks on a sailboat that also arrived late afternoon and while we all enjoyed drinks at a picnic table, we heard about their plan to take their boat all the way to St Martin in the next couple of months.  So many interesting people to meet!  Since we took a long walk earlier in the day, we felt we deserved a good meal at the Anvil Restaurant with Pat and Chip.  It was another fascinating evening. 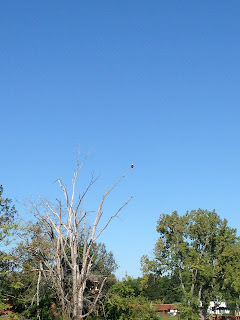 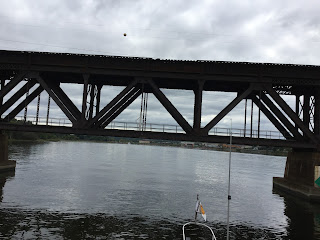 As we approached the fixed bridge, we stared intently at the tip of our height pole.  If you enlarge this photo you can spot the tiny piece of white tape at the top of the pole.  It was looking to be a very close passing.  The lock master of lock #3 assured us that the bridge height was a bit over 17’ so we had a whopping 2 inches to spare the canvas! 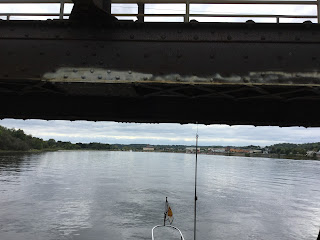 And the tip of the height pole just barely cleared the entrance to the bridge when we breathed a sigh of relief! Then we had a short cruise to the free town wall in Mechanicville, NY. 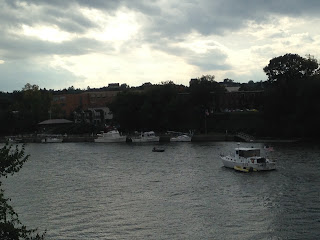 Once again, this town provides very nice bathrooms with good showers, free electric hook up and even an area for a free pump out!  This was as good if not better than many marinas we pay $100 for! Exercise was accomplished with a walk around town to scope out the grocery and small shops.  There was a small farmers market but not much fresh produce this time of year.  The night became quite chilly so we hunkered in for the night in our cozy boat.  On Tuesday we woke to rain that only let up for short periods all day so it was a “stay in the boat day”.  But we had a nice visit from friends on Free To B who were our hurricane buddies during Matthew in 2016 and their dirt house is close to Mechanicville. So we warmed up in a great authentic Italian Restaurant and wallered in home made Italian pasta!  Great visit but not the only one.  We stayed a third day and night to wait for our friends on Leilani to catch up with us.  The much warmer day (back to shorts!) was spent on chores, shopping and making beef barley soup for Jim and Linda to enjoy with us.  Fun to swap stories of our summer Canadian travels since they followed days or weeks behind us all the time we were up there! 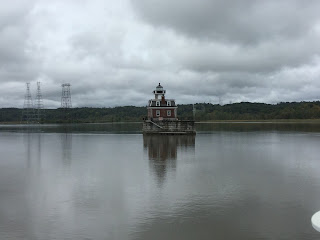 We left Mechanicville on Thursday 9/27 with a beautiful blue sky after lowering our mast for the last time. We had an uneventful day to cruise through the last 2 locks of the canal with no waiting time and through the Federal lock on the Hudson in Troy, NY.  We stopped 38 miles further south with the canal completed and anchored behind Houghtailing Island.  The clouds picked up, the rain came in and the night became chilly.  That remained the same on Friday morning as we pulled anchor to head to Kingston with a nice push from the river current.  On the way, we passed the Athens Lighthouse, built in 1874 to mark the Middle Ground Flats, a raised area to avoid.  We ended our 41mile cruise with the clouds dispersing at Rondout Marina near Kingston, NY.  On a whim, I texted with a long time friend from college days to let her know where we were because the last time in the same area, she flew over us and took pictures while giving a flying lesson which is her occupation and passion.  So at the last minute she and her husband Greg decided a road trip was possible so they drove nearly 2 hours to have dinner with us that night!  True friends!  Great fun having drinks on the flybridge and a really good dinner in town! 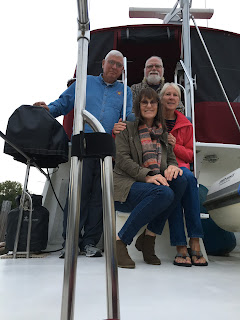 Thanks for the visit Peggy and Greg!
We went to bed that night thinking we were going to continue to meander down the Hudson and likely stay a second night at the marina.  But I awoke with a hinky feeling that we should keep moving.  After we both spent some time on various weather and buoy sights, and after communicating with Jim and Linda on Leilani who were far ahead of us by that time, we came to the conclusion that the weather along the Jersey coast was going to get more difficult so we needed to get south to be ready when the weather window would allow an easier passage in the Atlantic along the Jersey shoreline.  So the next two days, Saturday and Sunday, we traveled 57 miles to Half Moon Bay Marina and then another 56 miles to Great Kills Yacht Club, Staten Island. 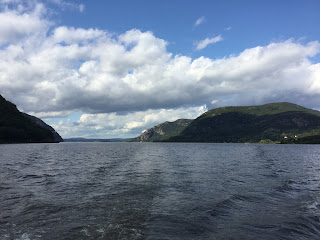 The Hudson is such a beautiful cruising waterway.  We had wanted to really take our time but the NJ coast was calling us to move on. 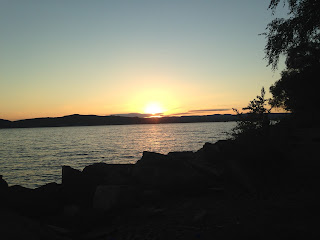 There is a great bike/walking path near Half Moon Bay Marina and the sunsets along it are typically spectacular.  We at least took the time to walk the path the night we arrived (well, just me because Al needed to rest his eyes from the strain of the day) and again the next morning before leaving. 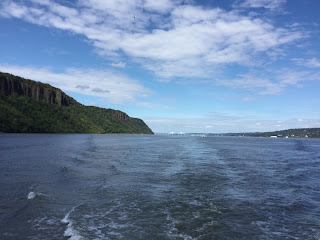 We passed slowly under the new Tappen Z Bridge because they are still dismantling the old bridge more than a year after construction was completed.  This is looking back at the bridge and the NJ Palisades . 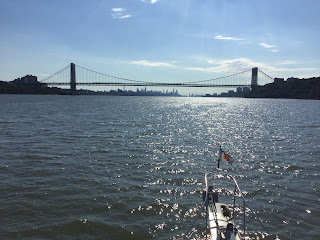 By moving quickly, we ended up entering the crazy busy area of NYC on a beautiful Sunday afternoon.  The skyline is peeking out from under the George Washington Bridge. 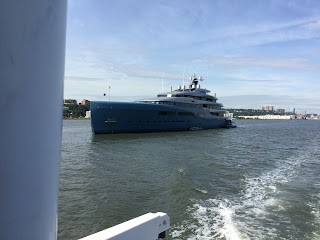 We passed this mega yacht anchored right in the middle of the Hudson.  Erik knows of the boat and told us an Australian cattle baron owns it and uses it as his NYC office.  Nice work space! 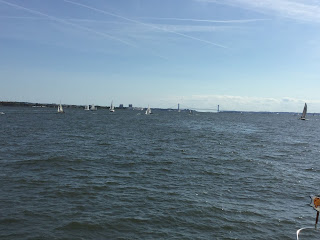 So we hit the New York Harbor right when all the sail boaters flitted all around the Statue of Liberty while we dodged fast moving ferries, loaded tourist boats, and all the regular Sunday afternoon boaters.  At least the boats under motor power were somewhat easy to predict and avoid but small boats under sail change course in minutes.  It was a time when all 4 eyes on board were watching intently! 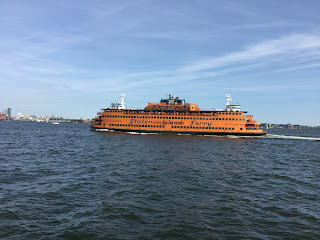 The Staten Island Ferries are easy to spot in their bright orange paint.  So we ended our Hudson River journey on Sunday 9/30 late in the day, tired and prepared to enter the Atlantic Ocean for the long 100 mile cruise along the Jersey shore to Atlantic City the next day.  We had studied many weather and buoy reports to conclude that Monday was the day.  For me, it was uneasy sleep but the Captain was confident and ready to cruise the ocean. We were in agreement so the decision was made.