Vergennes was a nice little stop that we enjoyed for 2 nights and then it was time to move on, so we untied lines on Friday, 9/14.  But not until we took a lovely walk along a trail that we discovered by chance which followed the bank of Otter Creek.  It was a leisurely afternoon cruise down Otter Creek  back to Lake Champlain with no other boat traffic to negotiate.  We had contact with our friends on Selah Way and it turned out they were headed down Champlain and we spotted them as we exited the Creek. 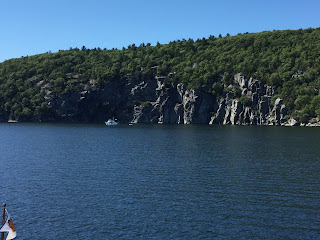 Boating and clocks do not go together at all and yet, here we are heading right toward Amy and David, such timing! Their boat looked so tiny against the rocky cliffs of the Adirondacks.  They came into our anchorage in Barn Rock Harbor and rafted up with us for an afternoon of boat talk.  The anchorage was small so they chose to move on, late afternoon to a different anchorage for the night. We had wind protection from steep surrounding cliffs so only ripples of waves rolled into our secluded spot as the sun set over the distant mountains. We enjoyed a delicious dinner of pumpkin stuffed ravioli that was purchased at a tiny store in Vergennes.  Love those interesting stores and the treasures they have to sell! On Saturday, we celebrated 3 years of doing this cruise.  We left on 9/15/2015 and now it is 2018! We have added Vermont to the list of states we have spent time in so the number is up to13. Later in the morning, we were joined by a smaller cruiser with a young family aboard and they shared our rather tight anchorage closer into the shore.  They boat on Lake Champlain regularly so shared information about areas we will cruise to eventually. That afternoon we took the dingy to the beach and made the arduous climb up to Barn Rock to look down into the harbor. 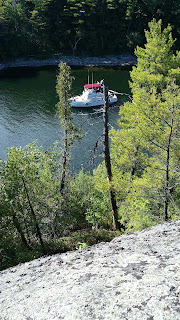 Once we made it up to the top, we were rewarded with a spectacular view of InSpeyered 2 floating peacefully. 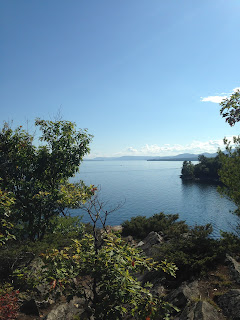 And we had more vistas to see the far off mountains that are part of the Adirondack Range. 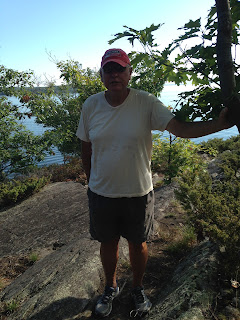 Al’s hip has done well, which has allowed him to navigate over the rocks.
Going up was challenging for our endurance and strength. 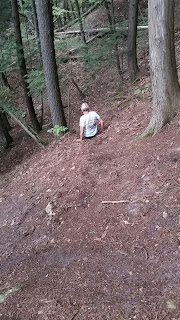 But going down with no trees to hang onto and slippery pine needles covering the dirt, was downright scary for me so I did the “slide down on my butt” method to stay safe.  Al just had to take a picture since no one else was around to see me scoot down inch by inch.  After surviving our short hike, we spent more time cleaning the hull from the dingy. Now she looks white again! That night, the Captain chose to sleep under the stars up on the flybridge which he enjoyed but didn’t rest well!  I on the other hand, enjoyed the warm cabin and slept soundly. 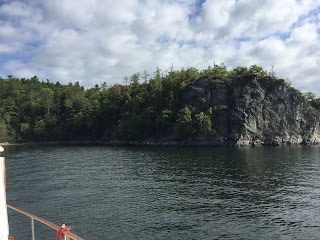 Al woke to fog so was up early but soon the sun burned the fog away and we had another beautiful day.  We were ready to pull the anchor after Al did some air draft measuring but in that process he banged his knee hard on a cleat and had a sizable egg growing so we delayed our departure for some icing to get the swelling under control.  We did get a clean raising of the anchor so it went quickly and smoothly.  BTW, the air draft measurements are in preparation for the trip down the Champlain Canal where there are low fixed bridges that we need to slide under.
Our destination for the day was Kingsland State Park where there is a nice open anchorage but first we went north up the lake to Point Bay Marina for a quick stop to take on much needed diesel, fresh water and get a pump out.  Then we went a few miles back south to the anchorage and soon deployed Victory Lap to access a small dock that is part of the park.  We found a nice hiking trail for a great woodsy walk.  The smell of fall was around us from leaves beginning to change color and drop to the ground. 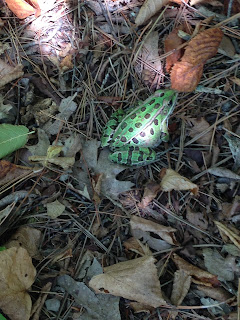 This little fellow was brightly lit against the dead leaves and pine needles. 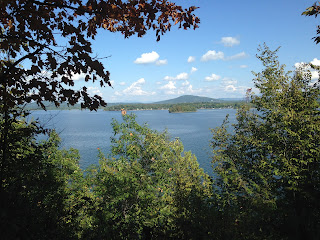 The trail took us around the perimeter of the park so we had some great vistas. 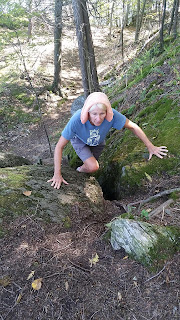 This shot was taken the second day of hiking when we picked a trail that was steep enough between rocks, that a wooden ladder was built to help with the climb.  It still scared me which is why I didn’t smile for Al’s picture. 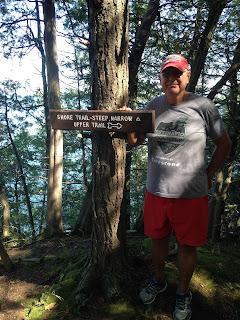 Al made it to the top with relative ease. We enjoyed the 2 night stay at this anchorage with good hiking, nice Adirondack chairs in the park to relax in, not many boats around so we had peace and great sunsets. Plus we got some boat chores done and worked on the plan for the next part of the journey.  The swim platform has one more coat of oil on it. 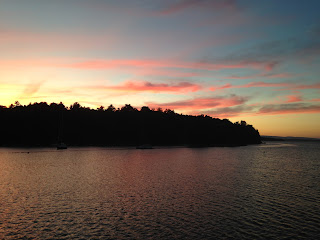 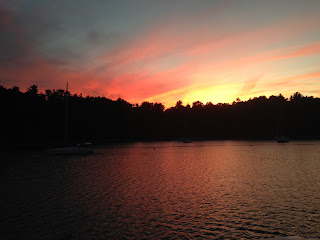 On this night, the light reflected a full 360 degrees around us.  Just breathtaking! 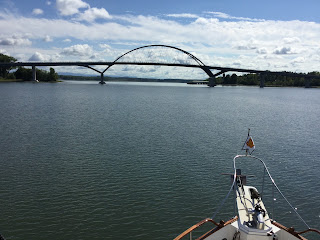 On Tuesday 9/18 it was time to pull the anchor and start moving again.  This time, the anchor was caked with heavy clay type mud that was resistant to being washed off.  After working on it for some time while we very slowly left the anchorage, we finally decided to drop it back in the water and wash it by driving backward and even that didn’t remove all of it.  So it remained slightly caked with mud all day! Our 28 mile cruise further south took us under the Lake Champlain Bridge, the only bridge over the lake to connect Vermont and New York.  Beyond the bridge, starts the river portion of the lake. 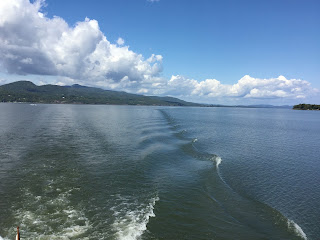 So this was our last view back up the lake where it is wide and full of great anchorages. 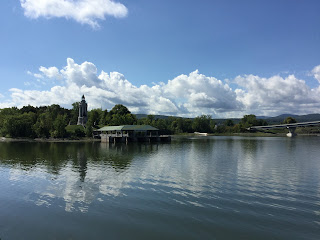 Along the river portion, we passed the Crown Point Memorial which marks the area of Fort Crown Point, the oldest fort in the area and was part of the Revolutionary War.  It was a hot, still day so we chose to pass the anchorage at Crown Point and continue south to a little pull off area named Five Mile Point.  Not much around except bird sounds so it was a “no walk day” with time to read.  The only thing of significance on that day was a sighting of a squirrel swimming up river in the middle of the channel, nowhere near the shore.  Since my eyes and brain could not quickly process together the odd sighting, there was no time for a picture.  I just hope he found his way back to dry land where he belonged.  Our hot day turned cold as the sun set so we found the need for more blankets.  On Wednesday 9/19, with a chilling breeze, we pulled anchor (hooray, no mud) and headed the 8 miles south to Chipman Point Marina.  The wind was blowing strongly pushing us off the dock and we had no help with lines,  so it took many tries to wrap lines around the dock cleats! We were grateful they had a car to use for a big grocery run and were relieved to be tied up for the heavy winds that built all day.  It was a chore day which included lots of laundry and defrosting the freezer and refrigerator. 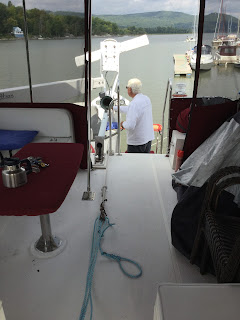 The next part of the journey took us through the first lock of the Champlain Canal and we had our first low bridge to contend with.  The general height of bridges along the canal is 17’ or higher so we had to have the mast lowered.  The morning of 9/20 was spent working on that process using a block and tackle pulley and the davit that we use for the dingy.  Al had done this with the help of Erik back when we were still at home to be sure it could be done.  But Erik is much stronger than the present first mate so the process had to be amended to take that into consideration!  The first try didn’t go well but no damage was done.  It just was a challenge.  So Al used his engineer brain and came up with an easier process so the lions share of the work was done by the davit cable while Al steadied it side to side and I held on to the pulley line just to keep it steady fore and aft. 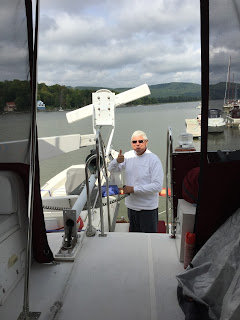 The mast was finally safely lashed down against a boat cushion on a board that crossed from a rail to the dingy and we were on our way! 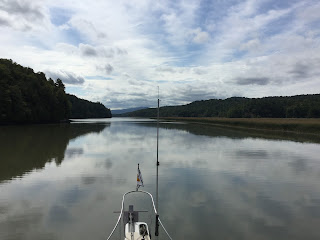 The river narrowed as we went further south.  Eventually the river comes to an end and Lake Champlain is connected to the Hudson River via the Champlain Canal. Note on the bow is the pole Al created over the winter that is set to the actual height of the canvas bimini.  That’s our way to know if we would clear a bridge without ripping the canvas!  It gave us great peace of mind.  But the measuring to the inch was a process and we learned that our air draft is 16.9’, a bit over one inch below the listed height of the lowest bridges.  It was a source of concern but on we went!  Our first stop was just past the first of 11 locks and past our first low bridge that we squeaked under. 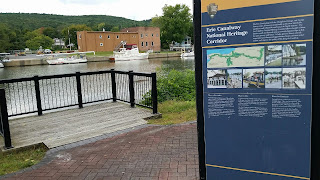 InSpeyered 2 sat on the free town wall in Whitehall, NY which provides electric and nice modern bathrooms that even have very clean showers, all at no charge.  The town is typical of many with lots of empty store fronts and yet they find a way to fund such a nice marina-like facility.  We supported their efforts with a donation and spent money in their stores and a nearby wonderful restaurant. 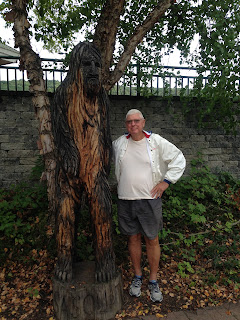 After a great breakfast at Historic Grounds the local restaurant housed in an old bank building, we walked the town to hit up the CVS and Dollar General.  Al stood next to the local Sasquatch at the waterfront park. We splurged and bought take out lunch from the same great restaurant too.   It was a 2 night stay for us since the tie up was so nice and the winds built all day on Friday 9/21. We befriended a family of 5 on their sailboat from Canada that tied to the wall with us and helped them with Active Captain.  The kids enjoyed a tour of our boat and wished for the space we had compared to their water home. 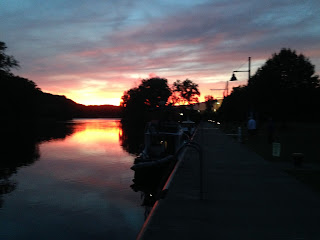 The predicted night time rain, made for a beautiful sunset reflecting off the gathering clouds. 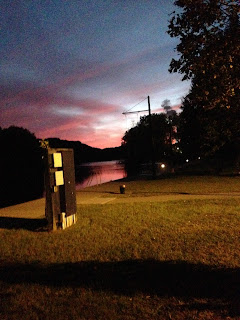 The narrow Champlain Canal awaits us!