Our last afternoon in Quebec City was spent walking to the market to stock up on fresh produce and of course to buy quiche for dinner.  So few days are left to enjoy some French cuisine.  We also made a big run to the grocery pulling our wheeled cart and hauling bags on our shoulders.  Laundry was a  focus as well to get all the bedding clean and put away those winterish clothes we used on the cold days of travel.  I took one last walk around the lower part of the city and then we each enjoyed the great marina showers one final time.  We appreciate good water pressure and nice warm water showers!  We had a quiet night watching an IndyCar race and then turned in early knowing we had to head out at 7am on Sunday.  The tide was high as we untied lines so the lock was open to through traffic allowing us to shave a few minutes off our long trip ahead.  Because the tide was rising in a westward direction, we had a push of tidal current for our first 2 1/2 hours. 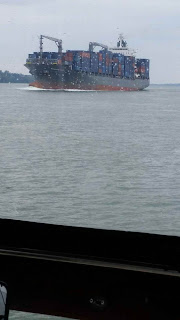 There was minimal pleasure craft traffic but we passed and were passed by many commercial ships. 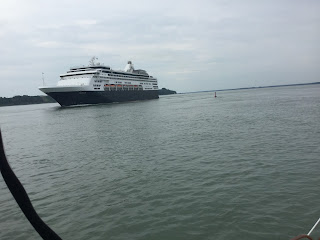 Some days, we have seen only a few big ships but this day was a busy one for commercial traffic. It at least keept us awake and interested when otherwise the calm water and overcast sky can lull us into a sleepy stupor!  We went 76 miles over 9 hrs as the tidal push diminished and the St Lawrence River current pushed back against us.  Just as we approached Trois Riviers Marina, a rain squall hit and the water became turbulent and visibility was poor.  The Captain slowed us down and I set lines and fenders in the rain.  We got into the marina with no problems and hunkered inside until the rain stopped.  Once it was no longer raining, we each set out on walks around the island park by the marina.  Another uneventful night was had. 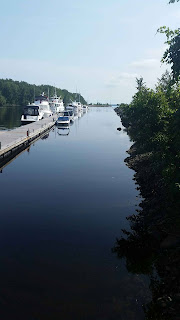 Monday was a clear blue sky day and our marina dock looked a lot more inviting than when we came  in Sunday afternoon. 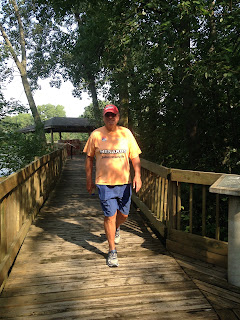 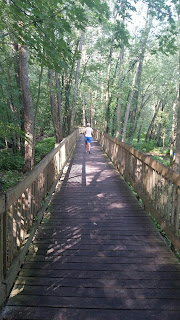 Al and I enjoyed a longer walk along a boardwalk built over marshy land that was surprisingly lengthy for being a man made project.  The marina was nothing special but the park around it made it worth the stop.  We did a few boat chores before untying from the dock and leaving for a relatively short, 4 hour/32 mile cruise with just a mild current to plow through.  We had enough of long days, big cities and marinas.  We headed to the anchorage we knew well, at Isle aux Sable in Lake St. Pierre.  Just as we were settling in to a quiet afternoon we had the great surprise of seeing old looper friends, Jim and Linda Mumper on Leilani, slowly cruise into the area of our anchorage.  Al hailed them on the radio and invited them to join us in our private anchorage. 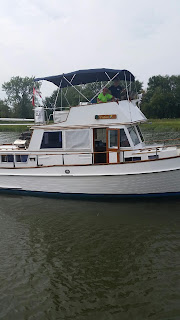 We had great fun having docktails on our flybridge and exchanging cruising information.  What are the chances two looper boats (they fly the gold flag) would find each other in a Canadian anchorage? Looper Magic!! 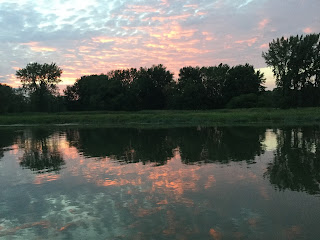 Once more we enjoyed a lovely sunset in our quiet spot.  But a pesky, relentless fly woke us up Tuesday morning before we were ready to be awake and would not stop dive bombing our faces until we got out of bed!  At a quiet anchorage no less!  But the good news is that the anchor came up easily and mostly clean after some morning relaxing time.  We left our anchorage at 10ish and cruised the same path we took earlier when Al’s sister was aboard, to the St. Ours Lock.  This time we locked through with no other boat traffic and tied to the wall above the lock.  It was a hazy, warm to hot day with barely enough breeze to keep the flies away.  We each took a walk for some exercise and Al indulged in an ice cream cone while sitting in an Adirondack chair.  Easy day!  Wednesday 8/29 we decided to take off before breakfast, no reason to hang around the wall.  I had a moment of panic when releasing lines because the midship line became pinched in the cleat and the wind was pushing us off the wall putting too much tension on the line for me to get it free.  We were rescued by a helpful French speaking boater who at least understood the intensity of my voice as I hollered to Al for help! We cruised 31 more miles to the first lock of the Chambly Canal.  This canal was created to circumvent the rapids on the Richelieu and is a series of 9 locks in 10 miles.  Our plan was to go through the first flight of 3 in a row and stay on the wall in the heart of the town of Chambly. 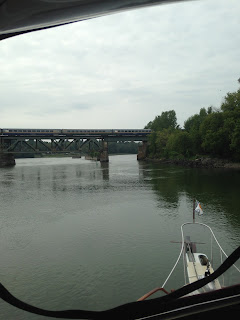 The cruise was mostly easy except for passing under this bridge which had a narrow opening with strong current against us.  Al called a securite on the radio to alert any boaters northbound, opposite us, because 2 boats our size could not pass under the bridge. But it was a quiet day and all the  warnings we had read about weren’t needed.  It was an easy pass through.  We got to the lock at noonish and tied to the blue line to wait for an opening.  But much to our chagrin, we were informed they had a leak and had just decided to close the canal “until further notice”, big bummer!  We moved the boat to the gray line where we could stay the night and eventually were joined by 4 other boats and a tourist day cruise ship.  Since we were the biggest, non commercial boat on the dock, we had another 48’ SeaRay raft up with us.  Never got to know them as they spoke French and minimal English. 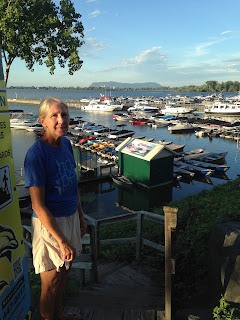 It was sunny and hot so of course we headed out to take walks!  I used my walk to find the grocery for a few things, to find a hair salon to make an appointment for a much needed hair cut and to check out Fort Chambly.  A quick storm popped up and caught us both by surprise while walking, bringing sudden, strong winds with grit and rain.  At least it cooled things down. 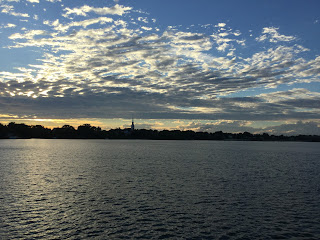 We had a night of cooling temperatures and good sleeping weather. Then we woke to a very chilly 60 something morning with a good breeze.  Back to long pants! The news was not good as the leak was only just starting to be filled in so the soonest we would lock through would be the next day. We made lemonade from the lemons and had a wonderful French breakfast, followed by whatever we wanted to do!  I got my hair cut, my toes done, hit up the grocery 2 more quick trips and walked the canal.  Al walked the canal path to see the work being done to plug the leak and take pictures . 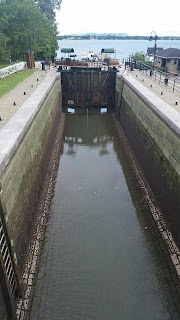 The 3 locks were drained and it was interesting to see the bottom. 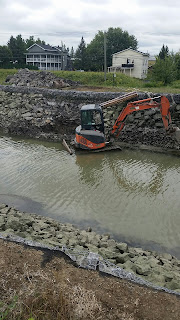 The basin above us and the canal to lock 4 was drained enough for the ditch digger to clear debris so concrete could be poured into the wall breech. 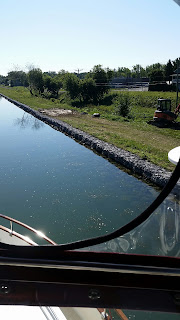 The next day when we locked through, Al took this shot of the area where the leak was filled to show just how high the water had to be raised up again for the locks to open.  And they did in fact open on time with our boat first in and a smaller boat behind us.  We had a slight mishap on the way into the first lock.  I was focused on being ready to catch the line that would be thrown to me so didn’t watch the hull as we glided in.  We only had 2 fenders set and the rubrail on the starboard bow hit against a part of the wall that was protruding out that was hard to see. With a loud bang, we had the rubrail split and a piece bent outward.  Al was very unhappy with himself but crap can happen on a boat and the damage can be fixed. 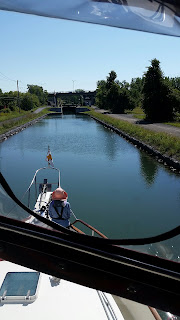 We went through the first 3 locks without stopping, no time for breakfast. 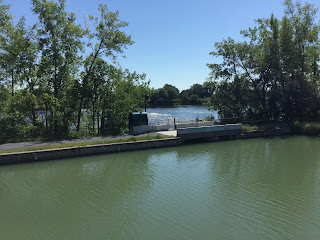 Through the break in the tree line, the rapids of the river can be seen. 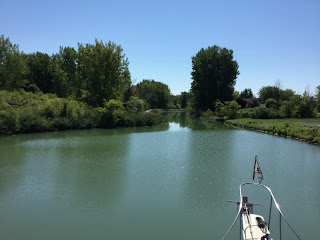 Many spots narrowed so only one boat could pass at a time.  We were surprised to only have 3 boats pass us northbound the whole 6 hours of travel. 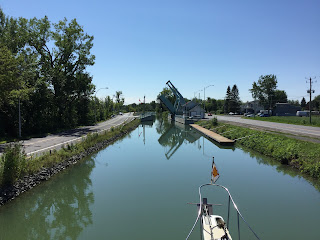 The canal has many swing bridges that have to open and are timed with the locks.  The speed limit on the canal is 10kph (6.2mph for us).  If you go faster, the bridges won’t open earlier!  We had a bridge that took a lunch break so we had to tie up at a floating dock to wait for bridge #10.  It was a tiring day of shallow water, narrow passage, 9 locks (8 in a close series and about a 1 1/2 hour cruise to the last one) with some waiting time in between.  We pulled up to the wall in St. Jean, kicking up mud due to shallow water, but safely got tied up, happy to have that section of water behind us.  Al’s eyes needed rest and my legs needed exercise so we did our usual apres cruise activity.  While I was out checking out the town for restaurants and a bakery, a looper boat came in and tied up just in front of us.  As always, we made a connection, set a time for docktails on our flybridge and later learned all we could about Lake Champlain anchorages and marinas from new friends, Amy and David, aboard Selah Way.  Their home port is Lake Champlain. 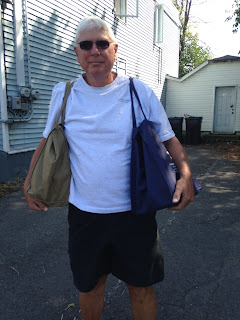 Friday night we went out for mediocre mexican food and Saturday made the trek to the grocery so we could eat well while exploring the lake. 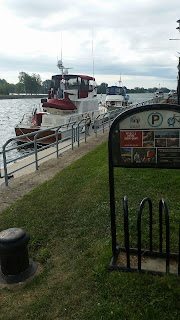 This was our spot on the wall in St. Jean and while it is convenient to restaurants, a really good bakery and not horribly far from the grocery, it was noisy and busy with people at night and just didn’t feel completely safe.  Sleep did not come easily.  We stayed 2 nights anyway to spend Saturday charging batteries with the generator and to have a little more time to exchange cruising info with our new friends.  They are new to looping so we filled them in on our highs and lows on the trip and now we are armed with great intel on Lake Champlain.  We departed Sunday 9/2 mid morning to cruise out of Canada.  It was cool, somewhat windy and eventually rainy but uneventful which is what we  like. 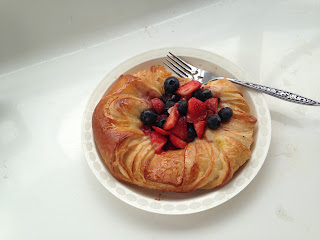 The last authentic French pastry to be eaten on the flybridge for breakfast while underway!
Au revoir Canada!