Anchoring and Hiking Along Lake Champlain

On Sunday, 9/2, we followed our new friends on Selah Way out of Canadian waters on the Richelieu River and into the headwaters of Lake Champlain, putting us back on US “soil” (with water on it)!  Entering into the US was uneventful which made things easy. 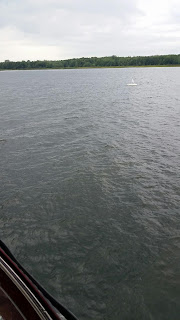 We passed by 2 of these very small white buoys which were the border markers.  So small that we couldn’t even read the writing on them!  Then with winds picking up and rain beginning to pelt us, we pulled into the customs docks that were placed temporarily for the boating season. With the help from Amy on Selah Way to catch lines, we got secure.  Only the captain leaves the boat to check in and Al was back on board in a very short time.  No questions were asked and only our passports and boat name and documentation were reviewed.  We waved goodbye to Selah Way and we turned into Gaines Marina, a short distance away.  Our batteries needed a good charge, the decks were filthy, and some laundry needed to be washed.  We stayed 2 nights at Gaines for chores. The interesting thing was how many of the boaters at this marina spoke French. I expected “Good morning” the next day and got mostly “Bon Jour”! 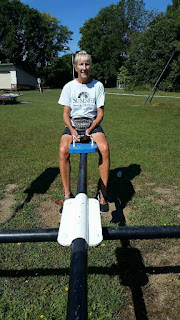 We did take walks around town and on our second day, Tuesday we found a nice town park with fun things to enjoy!  So it was not all work for us! 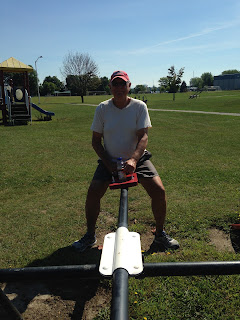 Al had worked hard the day before in the hot engine room, disconnecting and then reconnecting the inverter batteries which we were load tested by a marine technician on Labor Day.  Captain Al has been concerned about our charging system but the batteries checked out just fine.  I worked hard cleaning the outside of the boat that was full of spiders and all the things they “add” to the boat (black poop, webs, egg nests!). So we deserved to have a little fun Tuesday morning before untying lines. Then we headed out to our first anchorage on Lake Champlain. 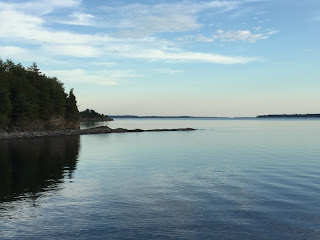 We chose Middle Bay off of Treadwell Bay based on recommendations from friends and were not disappointed.  We had views of Vermont mountains to the East. 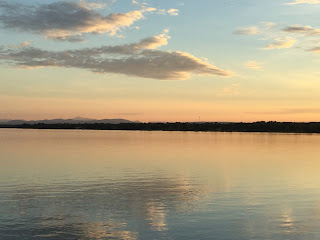 And we had views of distant Adirondack Mountains to the south. 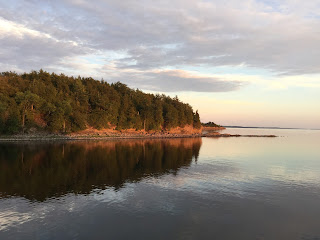 This is what we most enjoy! 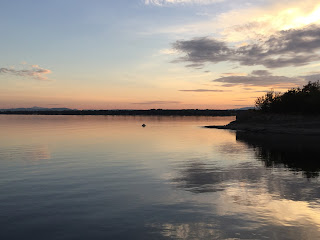 It was a beautiful, calm evening! It was so peaceful that we slept longer than normal and after a nice slow morning, we took Victory Lap to the small dock inside our cove to explore the trails of Point au Roche State Park. 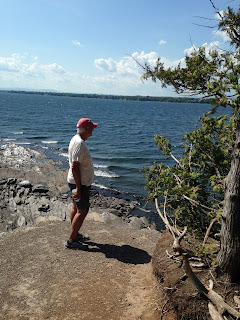 The wind was kicking up some chop so getting on and off the little dock was dicey but the hiking was our reward.  We had one scary moment when Al caught a toe on a tree root and tripped near the edge of the bank but caught his balance before tumbling down the side.  Another crisis averted! 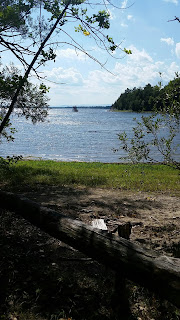 InSpeyered 2 sat peacefully, rocking in the choppy water of the cove.  The winds at 10-15mph, kept the heat away so sleep on the boat was comfortable.  On Thursday, 9/6 we took off mid morning for a short 11 mile cruise to Valcour Island and chose Sloop Bay as our anchorage.  Valcour Island is uninhabited and has trails and primitive camp sites.  Since we were on anchor by noon, we took Victory Lap over to shore to find a trail to hike. 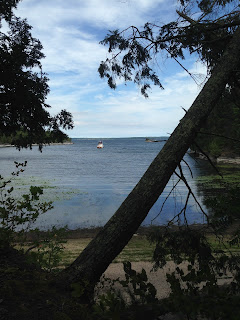 We stayed at this anchorage 3 nights because it was so beautiful and the walking was great!  Our first day, we walked the perimeter trail going south on the island. 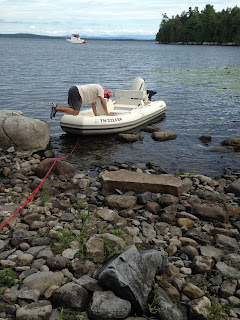 It was again a breezy day so the water was choppy.  Getting back on the dingy with dry feet, as it rocked in the waves was challenging to these old boaters!  So sometimes we take the crawling  method for safety! 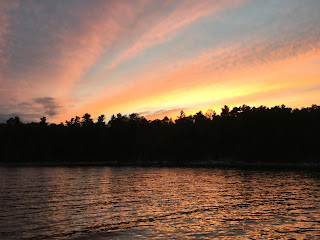 What a lovely night with a cool wind to require sweats for drinks on the flybridge, and later blankets for sleep.  The day was great except for the fact that when we got back to InSpeyered 2, the davit would not lower the hook to lift Victory Lap onto the mid deck.  So during the night we listened to wind and banging of poor little Victory Lap rocking against the big boat.  But with the help of tech support at Nautical Structures on Friday morning, we worked together to unstuck a valve for the cable and the davit was fixed. 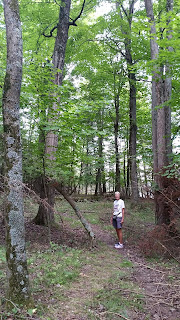 Back to shore we went to walk more of the trails.  It was warm enough for shorts, but cool enough to not break into a sweat. 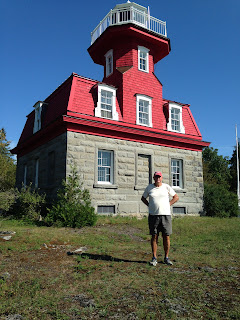 We walked 5 miles total and crossed the island to the Bluff Point Light House.  Good hike and tired boaters!  The wind picked up so we had a lumpy night of interrupted sleep.  At least it was very cool. 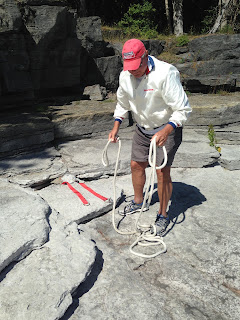 On our third day to explore Valcour Island, we chose to tie up on more solid rock as the wind was kicking up chop.  Al continued to improve upon the way he tied the dingy to shore.  This took some time but Victory Lap was secure!  And we had better footing getting on and off of the rocky shore. 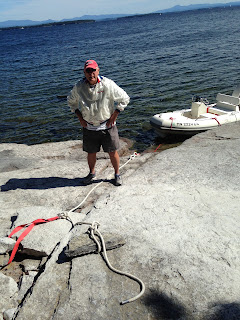 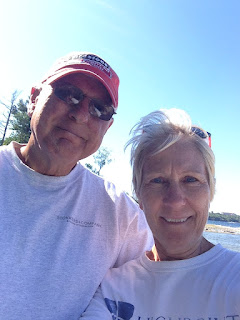 We walked the perimeter trail again only going north this time.  We reached the northern tip of the island before turning back.  Another great walk. 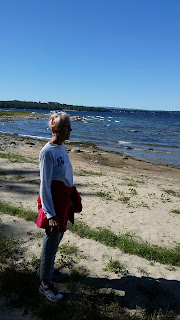 Here I stand looking out at the Vermont mountains from the northern point of Valcour Island.  The views were spectacular.  Another 4+ mile walk on great trails gave us some exercise. On Sunday 9/9, we pulled the anchor and it came up easily and clean after 3 nights so that was a welcome surprise.  It was a chilly morning as we headed south east to cross the lake from the NY side to the Vermont side against a little chop so some of the short 14 mile cruise was lumpy.  We saw plenty of sailboats enjoying the wind whipping down the lake.  Our destination was Burlington Community Boatyard to reprovision and to get tied to a dock for predicted higher winds and later rain.  Burlington has a great bike/walking path along the lake so we enjoyed that for walks.  We checked out the town on our first day while the sky was only overcast.  The highlight of the day was a maple creemee (soft serve) for me and a very good Mexican dinner that night.  We had inside information about restaurants in town from the brother of a college roommate who lives near Burlington. 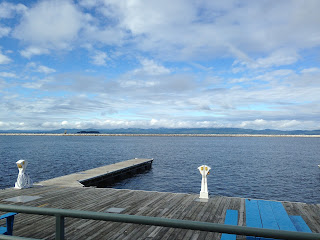 The view from Burlington across the lake includes the Adirondack Mountains.  Our second day in Burlington was spent mainly on doing laundry, filling with water, going to the grocery, pharmacy and liquor store.  We did start it with a breakfast at the Skinny Pancake for more crepes and a wrap for Al. The grocery run was sooooo Burlington; the boat is now stocked with all organic food!  We did score some really delicious New England scallops!  Because the weather was turning to heavy rain, we chose to buy some prepared food for diner while at the grocery which offered all kinds of vegetables and tofu dishes!  Again, that seemed soooo Burlington.  Al found a nice steak to cook to add to the veges for his dinner!
Tuesday morning started with drizzle which turned to heavy overcast and so after walking the bike trail, we untied and went on to another lovely anchorage in Converse Bay. 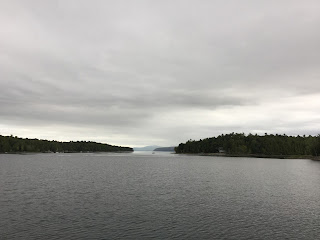 This bay has views of mountains all around.  It put us another 15 miles down the lake, a short cruise for us. 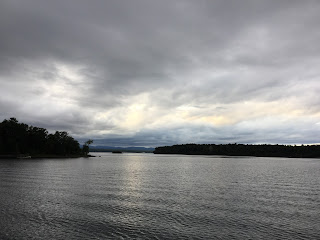 It was a quiet afternoon and night at this peaceful anchorage. We had a slow morning and then pulled the anchor expecting our luck to continue with clean anchors.  But no, the anchor chain was wrapped with weeds from about the first 30 feet down to the anchor itself.  We had put out 100 feet of chain so it was a slog to pull weeds as the anchor was slowly raised.  At least it was not windy so we had no stress about bumping into shore or another boat! 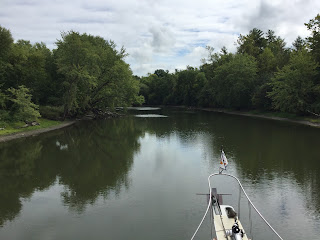 From Converse Bay, we went about 5 miles south to the mouth of Otter Creek, and headed up the creek to get to a free town dock in Vergennes, Vt.  Other than seeing a few snakes, lots of turtles, and some pretty shallow water, this little waterway afforded a slow, quiet cruise. 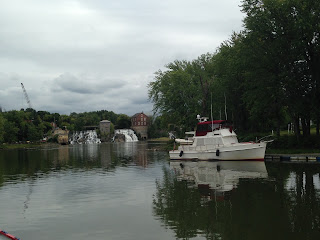 We at first tied to the south side but changed to the north side to try and plug into power.  That didn’t work as the power pole was 53’ away and our cord is 50’ but we are happy where we are tied to a free dock and can deal with the lack of power.  A big thanks to Matt who lives by the dock and helped with lines and moved some canoes to make room for us! 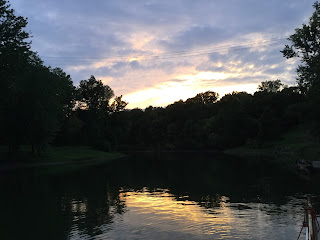 Last night we had a pretty sunset.  Today, we walked the town, and then spent the afternoon cleaning the starboard hull by deploying the dingy and slowly moving along the boat’s side to remove black soot from our generator and to rid the boat of more spider stuff and webs!  Heavy work but she looks a lot more presentable! 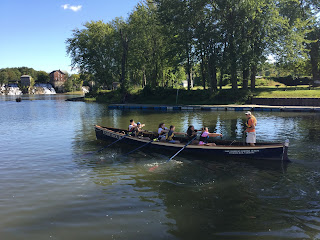 Late afternoon we were entertained by kids boarding the canoes to work on coordinated rowing. 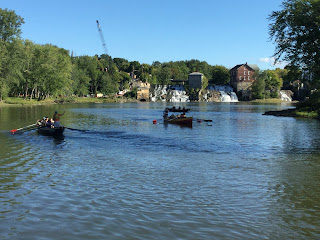 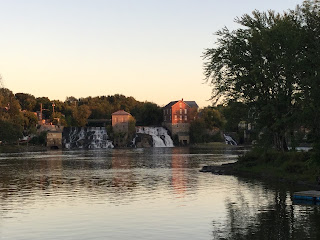 And now a quiet night looking at the Vergennes Falls from the flybridge as the sunsets and the air cools.  As most nights, we find this peaceful and a good way to enjoy our retirement together!