Continuing to Move South, Wondering What to do on Thanksgiving!

With the saga of the boat repairs behind us (we can only hope that lasts), Friday, 11/16 dawned as a blue sky day, cool but not frigid so it was a great day to untie and take off.  It was a special day because it is Erik’s birthday and this one was his 30th!  We had friends from the Firestone days who live in Mount Pleasant, SC that we wanted to visit along our way.  Problem was, we got stalled for so long that we only had 3 days to get to that area before they were leaving for Nashville for the holiday.  So we put on the push and ran 64.5 miles to get to Osprey Marina in Myrtle Beach, SC.  All done with North Carolina!! We were armed with updated information about the shoaling areas that plague the ICW in South Carolina from a packet we got in Southport and added that to info on Active Captain.  Tide and current didn’t cause problems for us so we made good time. 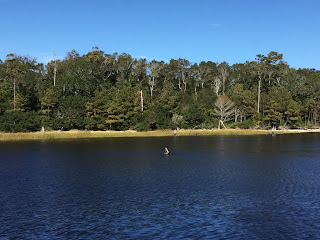 We came across a channel marker that had recently been damaged and took this shot to send it to the the guy in Southport who passes on traveling info to the next boaters down the line.  It is so helpful to have updated reports on shallow areas as we watched a boat go aground by getting too close to a marker with a known shoal.  Not all boaters read Active Captain warnings and it’s too bad for them! 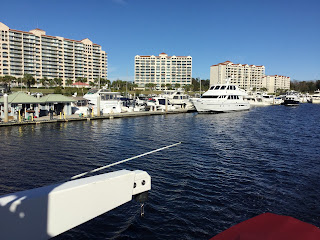 Also on the way, we passed Barefoot Landing where we had hoped to stop and meet up with our buddies on California Lady but our slow schedule messed that up as well.  They are off the boat and at their “dirt house”.  Cal Lady can be spotted on the inside of the larger yacht on the face dock.  Osprey was about 10 miles more and we got in with time to walk in the daylight.  Osprey is a great little marina that is a good price, has very nice facilities, gives all transients a goodie bag and even provides bagels/ bread/ donuts etc. for a light breakfast!  We indulged in the donuts! 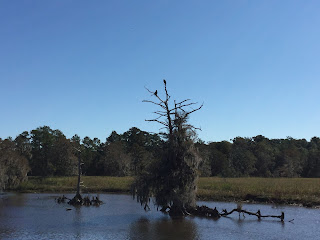 Continuing down the Waccama River on Saturday, we spotted these two Ospreys sitting atop a mangy old  tree.  We got a good start to our day and were happy with a push from current along the river.  It was another perfect travel day with sun and a blue sky.  The only complaint is that the sunny days create glare on the water which is hard on the eyes.  The fall sun is low in the sky.  The tide was in our favor as we left at low tide and rode a rising tide all day.  That was a big help as we passed through McClellanville, SC which is a long time area of severe shoaling.  Again, with the updated information we had, cruising through the shoals was only a tiny bit stressful!  We ended another 64.5 mile cruise in a great anchorage on Awendaw Creek.  Not far from Charleston so we will make it to see our friends!  Yea!  On Sunday, we waited a bit to leave because we needed the tide to rise enough to pass severe shoals on the waterway along our 27 mile cruise.  We came to a full stop several times when the water under the keel got to 2’  and even saw 1.8’ twice. 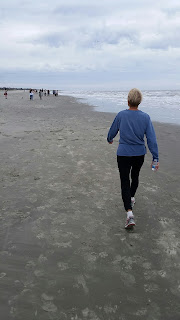 We got into Toler’s Cove Marina in Mount Pleasant (just across the harbor from Charleston) in plenty of time to walk over to Sullivan’s Island for a beach walk.  Love those hard packed beaches! 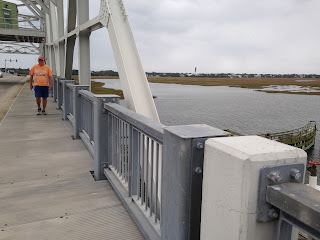 We crossed the Ben Sawyer Bridge on foot which we cruised under before turning into Toler’s. And our push to get to Mount Pleasant was paid off by a very fun visit with Donna and John Baratta! They not only took us out for a delicious grits and scallops dinner,  but they patiently took us to 2 grocery stores so we could stock up and have what we needed for Thanksgiving!  Well worth the 2 longer cruising days!! 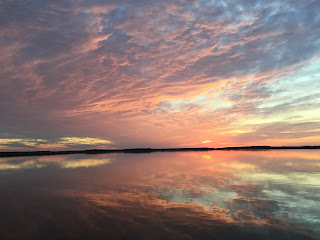 We took our time and walked again on Sullivan’s Island because the tide was lowering in the morning and we had more known shoals on our way further south.  Plus we had to pass through Elliot Cut which can have serious currents and we timed it for slack current.  We cruised only 43 miles, after leaving late morning and stopped at an anchorage named “west of watts” because it was after a shoaled area called Watts Cut which is being dredged presently.  This was our spectacular sunset in the anchorage which we shared with only 2 other boats. 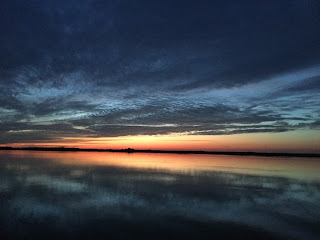 Later during the sunset, the sky became even more dramatic!   So that evening we pondered what we would do for Thanksgiving.  I had been trying to figure out a plan for several days and just couldn’t set a plan.  Then we looked at tides again along with known shoals and put it together that on Tuesday 11/20, we could only go 30 some miles until the tide would be too low to continue on.  That took us to Beaufort, SC.  When we up anchored early on Tuesday, we thought we would just use a mooring ball at the Downtown Marina but as the morning progressed, we decided to take a slip, knowing we had not given Beaufort a chance to show us her beauty last time we came through here.  And it is so much easier to check out a town when tied to a dock. 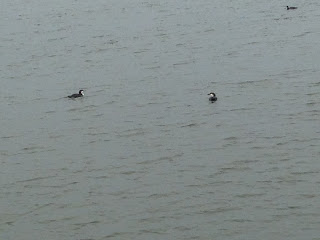 On the way, close to the Ladies Island Bridge, we passed a large group of loons likely using the Beaufort River as a stop over on their way migrating further south.  There had to have been 15-20 loons on all sides of our boat!  We pulled into the marina by noon on Tuesday and soon decided to just stay put for the holiday!   The ladies in the office told us of a local church that provides a traditional Thanksgiving meal to anyone who wants to enjoy their hospitality and they provide “take out” plates. That was enough to seal the deal and we signed up for a 3 night stay! 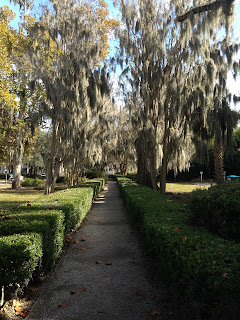 We have enjoyed lovely walks along the water and through the historic district and I have done lots of Christmas shopping so this was a stop well timed!  Our dilemma of what to do for Thanksgiving was answered by tides stopping us and a giving church feeding us! 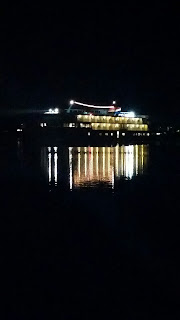 Last night we were surprised by the arrival of a cruise ship coming into the marina. 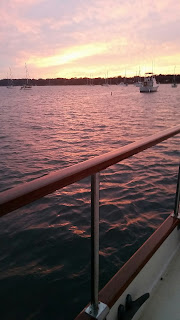 Tonight’s sunset looking south into the mooring field was beautiful . 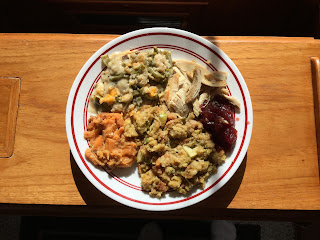 And today, Thanksgiving Day, was sunny, a bit chilly but so lovely to be in this historic town.  We thoroughly enjoyed our “church lady” meal and are thankful for each other, for our chance to travel by boat, for our son and family members and for great friends, both old and new.  We are blessed!