We have arrived at our December home port of Stuart, Fl., and we are sitting in the Stuart Yacht Basin, aka, a boat yard.  We have been in this boat yard several times before and all of those were extended stays.  This time we hope for a 2-3 week turn around so we can go have some fun somewhere else. For now we are having the broken stern rail replaced and the battery charger replaced under warranty. So where have we been along the way? 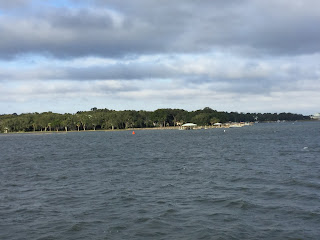 We headed out from Beaufort, SC on a windy, cold day after Thanksgiving and had a busy kinda cruise. There were many serious shoals to find safe routes through, lots of current to contend with and we used the high tide to get through an area that at low tide would have given us a few feet of water beneath the keel.  The tide was so high at the point of this picture that the channnel marker barely poked out of the water.  That tiny red triangle is on a post likely at least 9’ tall! 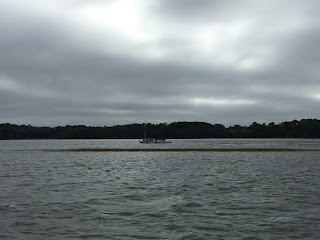 The clouds were thick making it feel like evening instead of daytime.  We passed this odd little house boat anchored seemingly on a permanent basis, just off the channel.  That would be a cold place to live!  We covered 63 miles and dropped anchor in Breakfast Creek off the Vernon River.  Anchoring was done in a cold light rain! 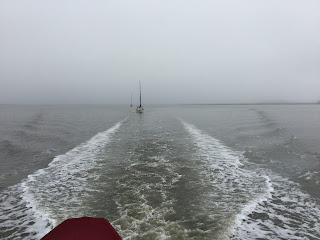 Saturday, 11/24, we continued our journey with fog following us off and on through the day.  Behind us are 2 sailboats we have passed every day of cruising since leaving Southport, NC. 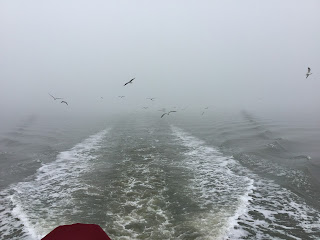 It seemed the gulls thought we were a fishing vessel so they followed, hoping to pick up the scraps thrown over board, but eventually they left to find a more productive boat. With fog adding to the challenge we traversed a short cut, known as Hell Gate, that is impassible for us without most of a high tide and we were lucky that we could hit it just at the highest point of the tide without having to purposely slow down or speed up.  Sometimes hitting the tide right is just pure luck as to when it happens during the day!  (Well we do check all the tide charts to know when it changes so it isn’t luck to find high tide, just luck when it is a good time for us!) 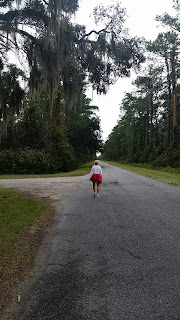 We anchored after covering another 55 miles in Duplin River, where we could access a ferry dock and take a walk on shore.  The cold and fog lifted to allow for a walk with shorts on.  But we started the day with several layers top and bottom!  The next day was the same, cold in the morning with calm seas.  Again we traversed several known shoaling areas using the tide that served us well.  Once more we passed the same two sail boaters but this was our last day to see them.  It is interesting to travel with the same boats day after day and not actually meet the people.  We stopped on Sunday, 11/25 at one of my favorite anchorages across from Jekyll Island early enough to go to shore for a late lunch at Tortuga Jack’s! 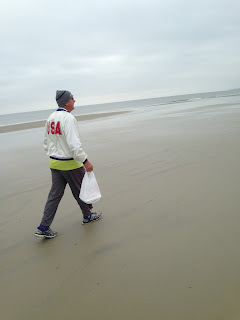 And had a nice walk along the empty beach (Al has our left overs!).  There was still a chill in the air and at this point we were in Georgia, when will we get to a warm latitude? 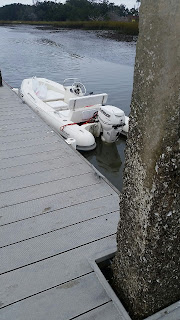 When we got back to the dingy at the town dock, we were relieved to find some water under Victory Lap.  We left the dingy at high tide and the Captain tucked her into the inside of the dock because of a strong current and only realized on the walk back, that the 8’ tide would be low and the dock could have been in mud.  But she was floating, thank goodness! 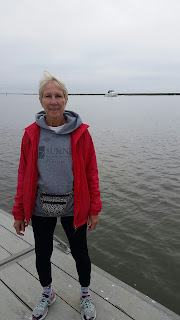 InSpeyered 2 is all by herself in this anchorage. 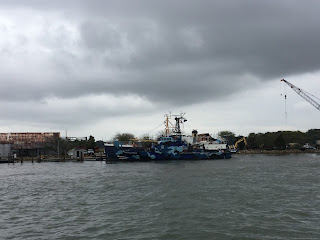 We woke on Monday to rain with some thunder and lightning so we waited an hour before pulling the anchor with the rain still pelting the boat but no lightning in sight.  Thank goodness the anchor came up clean and easily so it wasn’t a soaking wet experience. Plus the temps were only low enough for a jacket, not a sweatshirt plus a jacket.  The day remained dark but we had some interesting sights to pass and more shoals to negotiate.  Not sure about the paint job on this boat.  Every evening, once we are stopped for the day, we both start the research on the next day’s travel, looking at shoals, tides and currents, plus weather and where to stop.  But wind is not as big a factor in the ICW so that is a plus.  Our plan for Monday was to stop at the Jacksonville free dock provided by the town and it was also the same plan for lots of boats.  When we got there, the boats were tied up 3 deep to each other and there was not an inch of dock space and a near by anchorage was also full.  Because we left late and traveled 60 miles to get to the northern border of Florida, we had to work fast to find an alternative place to stop before it got dark.  I called marinas and while Al searched and found an anchorage, yeah, a quiet spot to drop the anchor only 4 miles off the ICW, up the St. John’s River.  No place for a walk but one day off is ok. 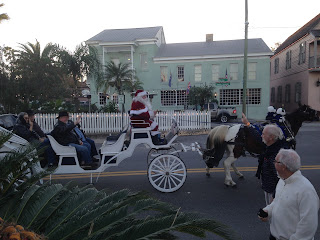 Tuesday was a better day, with sun, a fairly easy cruise with minimal shoaling, and no crazy currents and the tide changes in Florida are 3’ or less.  Our destination was a slip at the St. Augustine Municipal Marina which we made into a 2 night stay. But getting into the slip against a strong cross current in a narrow fairway made for a harrrowing  situation which pinged us into a cement piling but Al was able to power InSpeyered 2 out of the fairway without hitting another boat for a second try at a much easier to access slip.  This town is a Christmas destination because they have beautiful decorations, “the night of lights”, which is very special and lots of places to shop. Santa was driving this carriage around town, entertaining the many tourists. When the darkness descended, the lights were spectacular! 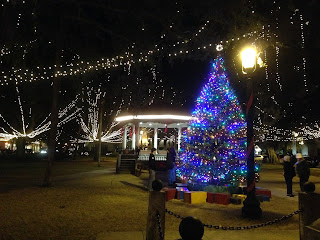 This park was a short walk from the marina.  And beyond this park, is a favorite pizza stop for us! 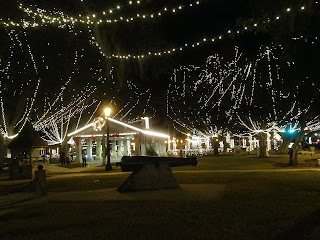 This stop over not only put us in the spirit of Christmas, it also allowed us to get more shopping done for family presents. 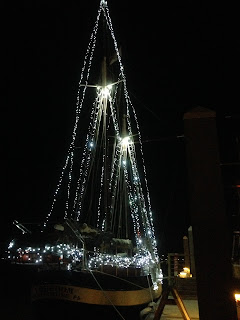 This sailboat went out at night, taking tourists around the harbor to see all the town’s lights from the water.  We had a nice surprise also in St. Augustine as a boat that has completed the Great Loop pulled in next to us.  The boat is Velomer and Pat and Bob are folks we met the fall of 2015 going down the rivers in Tennessee, Mississippi and Alabama.  The boating world stays small!
Thursday, we timed our departure from the marina for slack current to avoid any mishap getting out of the slip and with Pat and Bob shipping lines for us, it was an easy departure. 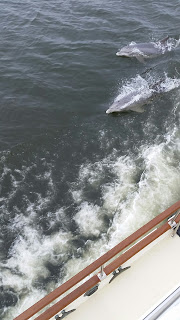 It was another cold cruising day that gradually warmed up but look who we have escorting us!!  The dolphins are back in high numbers and entertained us the rest of our cruising days.  We got lots of video but posting videos on this blog is not in my skill set.  On Thursday 11/29 we covered another 54 miles and pulled into a slip in Daytona.  There was no good place to anchor and get to shore so we chose a slip for walking purposes for both that afternoon and the next morning.  That way we could anchor on Friday near Titusville and not try going to shore.  We were in travel mode, slowly eating up the miles to get to Stuart.  Only 3 days left of 50 mile travel days. 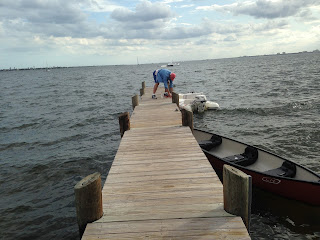 There is not much we won’t do to get to shore for a walk! On Saturday 12/1 we cruised to this wide area just off the ICW in order to access a boat ramp dock in very strong wind that made for a very choppy dingy ride and challenging tie up at the dock.  But we could walk to a Publix after walking to the beach and got just what we needed for 2 more meals on the boat before Stuart. 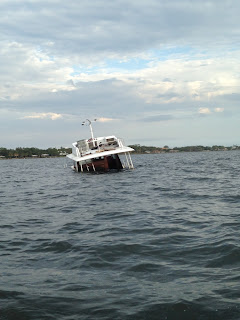 This very sad boat was on the bottom, not far off the boat ramp dock.  Perhaps it succumbed to Hurricane Irma. 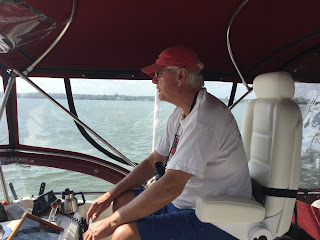 And look, we are finally far enough south in Florida to don shorts and tee’s with windows open!  On Sunday we made it a “no walk” day and easily dropped anchor near Ft. Pierce at Harbour Isles, a place we’ve anchored before.  Always easier to get into places we know.  On the way, after passing Vero Beach, we passed a sailboat going north and I recognized it as the boat belonging to an old friend from Canton, Ohio days, John Miller.  Again, this boating world is amazing.  We chatted on the radio briefly to catch up a bit and went on our opposite ways. 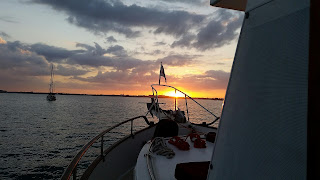 It was a warm and quiet night near Ft. Pierce.  Only 37 miles left to cruise to Stuart Yacht Basin where they expected us to arrive mid afternoon on Monday. 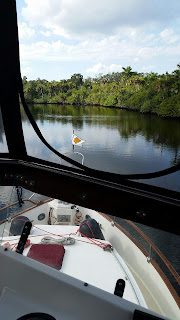 Stuart Yacht Basin is down the south fork of the St. Lucie River and it is a curvy, shallow waterway with a full U turn in a tight area to get to the boat yard.  But the sky was blue, the air was warm (a bit too humid, but this is Florida) and we were both happy and sad to end this long journey.  As the crow flies, we are 1500 miles from Tadoussac, Quebec and about 4 months of travel since we were there this summer.  I haven’t done the math to see just how many water miles we covered from there to here but it is likely double the straight line of travel.  We are looking forward to time with Erik while we watch the work get slowly done on the boat.  It will be some weeks of sitting here before we start moving again and may be that long before there is much to post on the blog.  Merry Christmas to all!!