Swinging on the Hook for the Holidays

As of 12/3, InSpeyered 2 has been happy to be in Florida.  Our stay at Stuart Yacht Basin extended into 4 weeks, longer than we wanted, but the outcome was yet another “makeover” to add to the beauty of the boat. 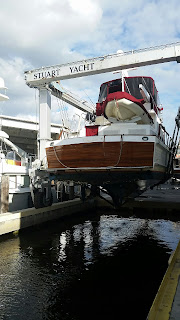 She was hauled out a week after arriving at the boatyard to have the bottom checked and much to our dismay, both props were found to have dinged up edges and the port prop shaft was slightly bent.  Typically a vibration can be felt when the props and shafts have misalignments but we had no clue that we had any prop problems and no recollection as to when the damage was done!  Oh well, better to find an unknown problem before it grows into a much bigger problem. 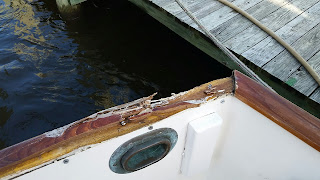 Our main reason for being in the yard was to replace the splintered stern rail. 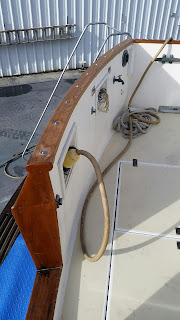 And while up on “the hard” a new rail was installed and eventually shined up to look better than the old rail. 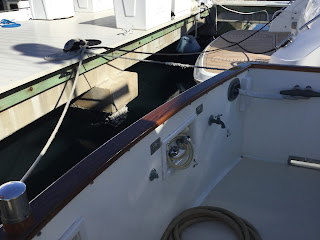 Now she looks like she was never in a scuffle with a mega yacht!  Plus she has a newly painted bottom, nicely waxed hull, all the rails have 2 more coats of finishing epoxy with some of the dings repaired, the battery charger was replaced by Al and Erik and the props and shaft are straight.  But the down side to having all that work done was that she was up on the hard for 9 days and we had to find somewhere else to live.  Ahh, but the Marriott points came in handy, placing us in a lovely room overlooking the Hutchinson Island Beach for 6 of those days. 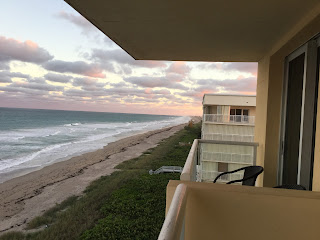 Not a bad way to spend some time in December, sitting on this deck, watching the sunset, taking walks on the beach and enjoying good wifi!  Of course we made daily visits to the yard and did some boat chores of our own including marking the anchor chain with paint marks every 10’.  That is a chore that seems to need redoing every 6 months or so.  We also met up with our boat buddies on Free To B for dinner and again for a lunch.  3 of the 9 nights off the boat, were spent with Erik in Fort Lauderdale, relaxing in his very clean apartment and checking out some of the local restaurants. 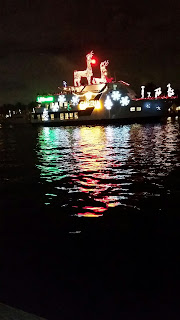 An added pleasure was the annual Christmas boat parade on the New River where we saw many mega yachts decked out for the holiday.  We had a great spot to watch the parade on the docks of Bahia Mar Yachting Center.   Rudolph looked perfect atop this mega yacht. 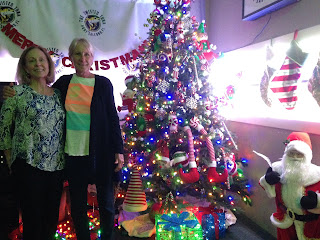 Being in Stuart allowed for another opportunity to meet up with my college roommate, Mo, and have some Christmas cheer with her. 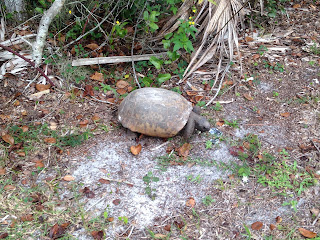 And while we were on the boat at the yard, we took daily walks in the neighborhood and occasionally spotted what looked like a very old Loggerhead turtle. 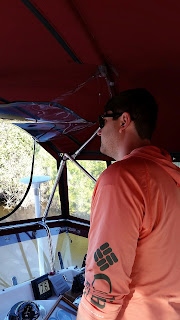 Finally on 12/23 we were free to leave the boatyard and cruise to Peck Lake to enjoy some peaceful time on anchor with access to a lovely coastal island beach.  We had planned to leave the day before but our rails needed more sanding and coating.  So while that was being done, Al and Erik updated the Garmin and discovered the depth sounder on the bow was not picking up a signal.   The guys doing the rails were the same ones who painted the bottom so after a quick query it was discovered that the sounder was taped over to avoid getting painted and no one thought to pull it off before splashing the boat!  It was late afternoon when it was all figured out so no time to pay a diver to clear the sounder.  So before we left on Sunday, the boat was hauled out again, tape pulled off, lowered back into the water and off we went with the second in charge, Erik at the helm.  With serious concentration, he skillfully drove the boat in the narrow and shallow water of the St. Lucie River. 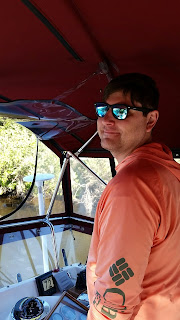 But just like his dad, he is always happy to have the helm under his command! 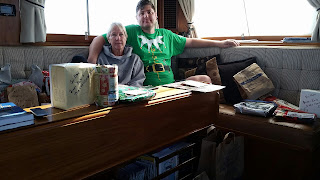 “Elf” and mom enjoyed together time on Christmas Eve Day when we opened presents which was not our tradition but then being out on anchor on Christmas was not one of our traditions either!   We were just happy to have presents to share because several days before, Erik’s truck was broken into and our gifts for each other were stolen.  Erik truly was the elf this year because he did shopping for Al’s gift to me, my gifts to Al and his very special gift of Garmin cameras for the boat that he gave to us.  All stolen and replaced at the last minute! 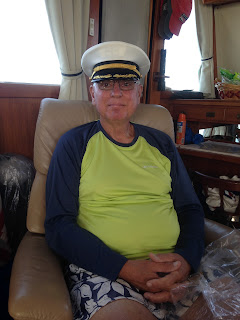 Captain Al was happy to have the proper hat to wear on more formal occasions.  It is helpful to have a son in the marine business who can access things like official nautical uniforms.  And we were lucky that this gift was already hidden on the boat before Erik’s truck was vandalized so the hat did not need replacement. 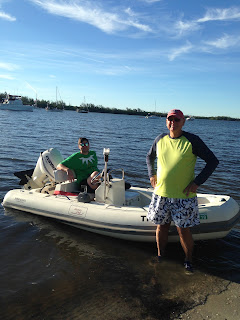 Perhaps family walks on a beach will be a new tradition for us!  We had a wonderful Christmas on anchor and will gladly do it again next year. 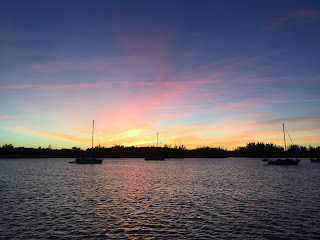 Peck Lake was surprisingly popular as a Christmas destination. 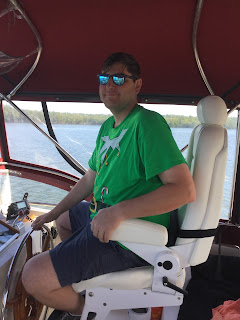 We headed beck to the boatyard on Christmas Day with “Elf” driving once more.  It turned out that we had to return to the yard because the rails had clouded over from moisture.  Stuart Yacht Basin was previously owned by Gregg and Nancy Burdick, who over the years have become our personal friends and they continue to live next to the boatyard and own some of the dock space.  So we were grateful to have them offer space on their docks for part of the earlier time in December and then from Christmas on, until the rails were redone.  They also treated us to a Boxing Day gathering which was fun and filling.  Our last night in Stuart, we met up with friends from Hendersonville, Marie and Mike Sigalito for a great Italian dinner. Finally, with the rails redone and all the boat maintenance behind us, we untied lines and left to cross Lake Okeechobee on Saturday 12/29. 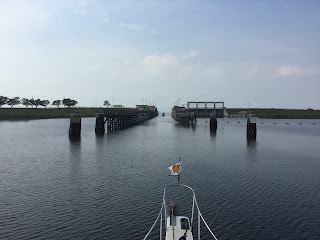 The water level in the lake was slightly low so we breezed right through the Port Mayaca Lock which saved us some waiting time.  It was a very calm day on the big lake.  Easy cruising! 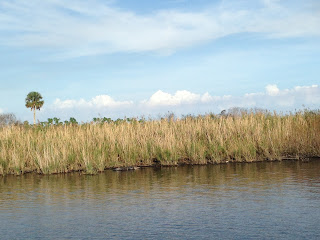 Gators were abundant along the Rim Canal which took us to the Moore Haven City wall for the night.   We completed 67 miles of travel with 3 locks done and had 30 mins to spare to get through the Moore Haven Lock before closing time.  From there we continued on the Okeechobee Waterway and went through 2 more locks, negotiated bridges low enough to lower whippers and encountered plenty of holiday boat traffic! We stopped at Fort Meyers and enjoyed the Legacy Marina which is a favorite of loopers and one we wanted to check out for future stays. 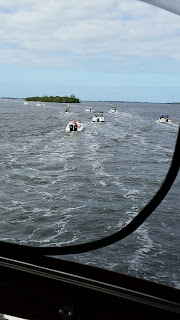 From Fort Meyers, the Gulf ICW begins with several long stretches of no wake zones so boat traffic backs up and since the channel of deeper water is narrow, it takes some serious concentration to avoid collisions.  Thus it is named the “Miserable Mile” but actually is several miles long. 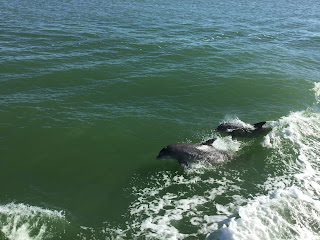 The 40 miles from Ft. Meyers to our destination of Cayo Costa anchorage was not all that miserable since we had boat buddies to entertain us along the way. 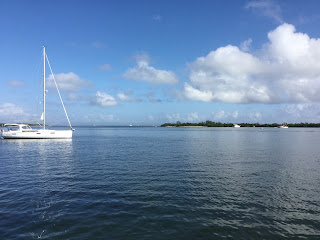 This was our fourth time to anchor at Cayo Costa and what a perfect spot to be in for the last day and night of the year!  This anchorage is always popular and well used but shoaling is making the entryway very shallow so we found ourselves on a soft grounding on the way in but made a slight correction and we made it in with 2-3’ of water below the keel.  We enjoyed 2 days of more walks on the beach, a little wading in the chilly Gulf water, and just peaceful swinging time on anchor.  Happy New Year to all as we begin 2019; the year we finally will finish the Great Loop!! 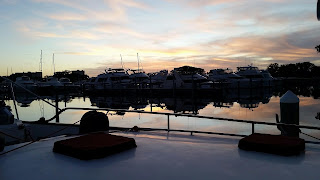 On Wednesday 1/2 we headed north on the GICW to Longboat Key Club Moorings where we will stay for 2 whole months!  That will be a first for us, to stay in one place for such a long period.  So far it looks like we will have plenty to do with access to the beach, a pool, bicycles, a shuttle van to places nearby, and a Publix in walking distance.  This is a big marina so just getting to the bathroom is exercise. 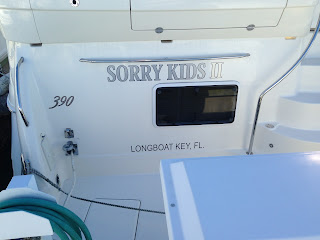 And to end this posting, the best named boat so far that we have seen in 3 1/2 years of cruising is “Sorry Kids”. I guess it would be to long to name a boat “Spend The Kid’s Inheritance Now” and not make sense to many with just “S.K.I.N.”   So this boat name says it all!!