And Now For The Rest of The Story!

We headed out of East Pass with low rolling waves so to be cautious I chewed up a Bonnine Tablet to head off any feelings of motion sickness.  We were pshyched! 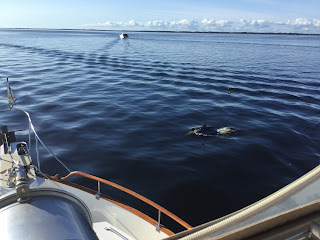 Dolphins escorted us to the pass so I chalked that up as a good omen that King Neptune was blessing our journey!  I sent a text to Al's sister and to Erik as we left so they would have enough information to notify the Coast Guard if we didn't arrive in Clearwater by evening on Monday. That is a standard safety precaution for open water crossing. 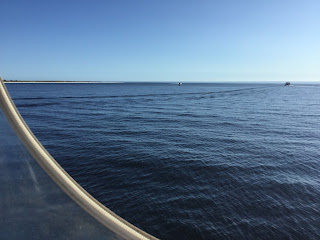 Heading to the buoys marking the Pass. 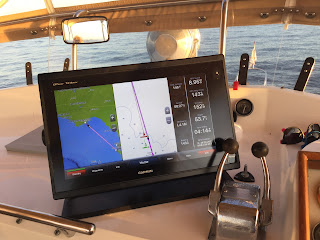 The Garmin showing the line we were headed on via Mr. Auto Pilot (on the left) and the location of our boat buddies in relation to our boat (on the right).  When it got dark, the screen was our way to know everything we needed to stay safe while traveling with other boats near by.  We set ourselves about 1/4 mile apart as a safe distance.  All night we could also see any other boats within miles of us.  Our radios were set to 16, the universal hailing frequency and we also had one scanning channels to listen in on other boats chatting to keep up with them and also to keep us from getting bored!  We knew of at least 2 other groups of boats on the loop that left just after us.  It was kinda fun to travel knowing so many boats were out there with us. 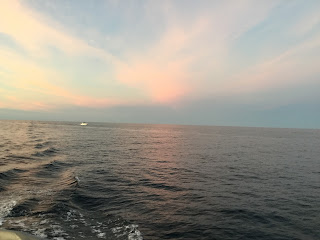 The white dot is Liquid Assets bringing up the rear just as the sun was beginning to set. 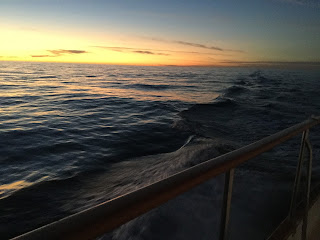 It is hard to see, but as the sun was below the horizon, the wind picked up and so did the waves to a 1-2 foot sea.  That was ok but meant we were in constant rolling motion.  I took the first nap early and then fixed a late dinner for Al when the rocking got more intense and I could not sleep.  It was difficult to heat the hearty beef barley soup we had so we only had half bowls to avoid the slop.  Al took his break and managed to shower without falling over but the wind continued to intensify and the waves picked up enough to slap water over the bow.  The night is a blurr to me so I can't give you great detail.  I remember I had the helm at 4am because it was our turn for our every half hour radio call and the other 2 captains began the discussion of changing course because we could no longer stand or walk in the boat without 2 hands on firm surfaces at all times.  Al was trying to rest but couldn't sleep with the rocking so between 4 and 5am, we both took watch.  The three captains finally came up with a plan to turn toward Tarpon Springs to take us due east which put the waves on our bow rather than on our beam (sideways rocking is much harder to tolerate and tosses the boat more).  So, one by one we each took a turn to Port with the last boat turning first to avoid running into each other in the moonlit night 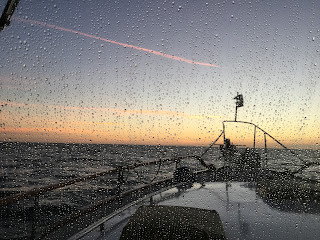 Finally the sun began to rise and you can see the saltwater wash on our windshield from the waves all night.  At this point we were kinda numb but still awake. While it was dark, we used the inside helm but once the sun rose, Al went back up to the flybridge and almost slipped off because it was so wet and we still had rolling waves on the bow.  I stayed put holding on to the helm station to steady myself.  It was a very good work out for our core muscles because the balance challenges were contstant.  So that is why my poor little ankle is a bit sore still today! 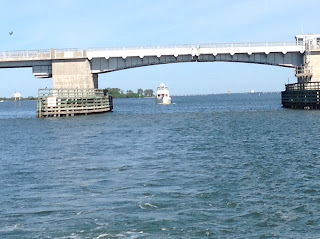 This is our boat going under the bridge on the ICW as we headed further south to get to Clearwater. Finally we are out of the Gulf and the waves.  One friend who lives here told Al this morning that the weather reports for Sunday night were dead wrong and we can attest to that! 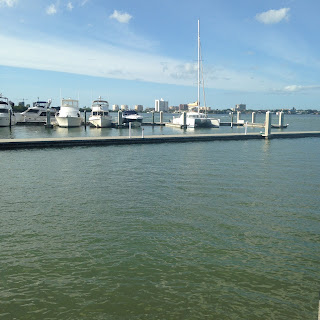 Here we sit in the calm water of the ICW nestled between the white and dark blue boats. After 12 hours of sleep last night, we are ready to take on a lovely beach walk and put this crossing story behind us!
Posted by Jane at 1:03 PM