A View of Low Tide Traveling

When we cruised our way from port city to port city, we chose to time our travels following a rising tide to find the deepest water levels in the shallow areas.  This also lead us to travel shorter periods so we found lovely anchorages between the cities. 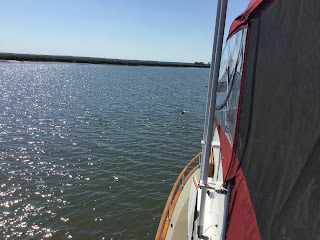 This is the Wahoo River where we stayed between Savanah and Beaufort.  If you make the picture larger you can see a dolphin quietly swimming around the boat during early evening.  This is one of the best times of the trip when no other boats are around, there is complete silence except for chirping birds and the occasional light snore when a dolphin comes up for air while swimming by the boat. 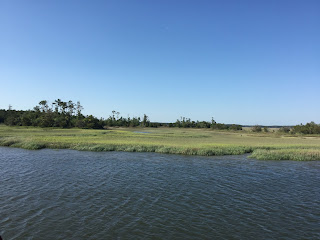 This is our salt marsh anchorage on Tom Point Creek between Beaufort and Charleston taken when the tide was around the high point.  But to leave this anchorage, we chose to change it up and go when the tide was low to have the rising tide behind us and push us along.  It also allowed us to arrive at a narrow passage just before getting into Charleston where it is known to be a tricky passage because of strong currents.  We tried to time it so the current was slightly against us, as it is easier to steer while plowing forward as opposed to having the current push us to fast.  A strong push feels like driving a car on icy pavement. 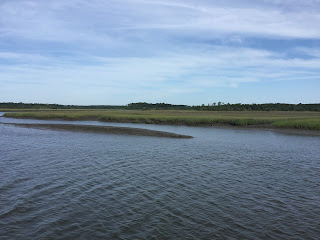 So this is what we saw coming out of our anchorage at low tide.  The small island of sand is a visible shoal maked on the chart as a slight "hump" that could easily catch the keel if covered by water at higher tide and cause a grounding.  This is my first glimpse of the sandy shoals we have traveled over for the past week or so.  Kind of scrary to actually see it sticking out of the water but also made me realize why Al always talks about the safety at low tide when you can see everything more clearly. 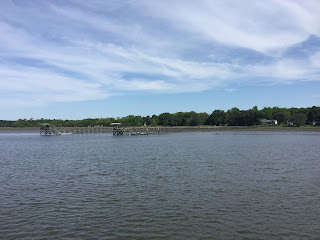 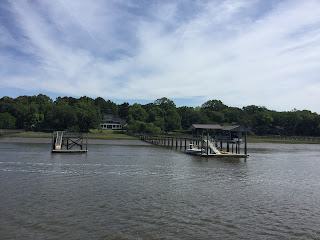 Traveling at low tide also helps to appreciate why these homes have such long docks that travel over pluff mud when the water is as much as 8 feet lower compared to high tide.  I love that term, pluff mud!  It is the soft bottom teaming with shell fish and has its own special odor when not covered by water! Those things that look like sliding boards are walkways that adjust to the water level.  Walking down one at low tide is a challenge!! 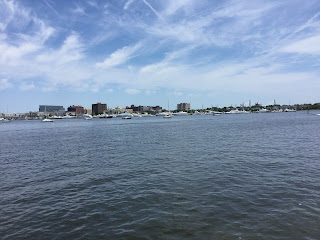 Entering the Cooper River along one side of the Charleston peninsula we see lots of boats.  We are lying low in Charleston for a week so Al can fly to Miami to have his eye checked.  Since I have been slow to blog, he has already been to Miami and had all good news.  His retina is reattached and healing well and his vision is improving slowly the way the doctors expected.  He has to return to them in another month but in the mean time, we will continue our trek north.