Cruising Our Way Out of Florida 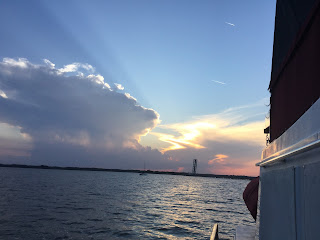 Sunset from our anchorage in Titusville to end a peaceful day.  Saturday, April 30 we cruised another 50+ miles to reach Daytona.  Al's college roommate, his wife and her father met up with us for a very tasty dinner at Aunt Catfish, a popular old restaurant on the ICW.  We had intended to continue with anchoring out but the boat traffic and the possible anchorages were not what we expected so we ducked into the Halifax Harbor Marina.  It turned out to be the biggest Marina we have ever seen or stayed in.  We walked our usual hour and didn't retrace our steps within the Marina property!! On Sunday we cruised another 50+ miles to Rivers Edge Marina in St. Augustine. 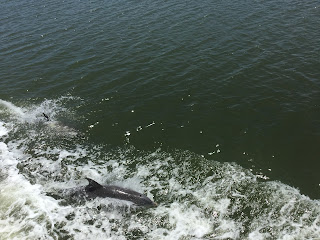 It is always fun to have dolphins swimming along with us.  But we let them distract us and next thing you know, we found ourselves in 2' of water below the keel and had to slowly work our way back into the channel.  We are now in ICW waters that have lots of areas with sand shoaling so sometimes the channel is moved to keep boaters in deeper water.  From now on, no more distractions because we both have to stay alert to the changes! 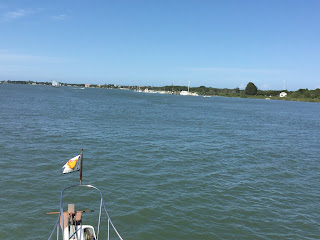 This is our view as we cleared a high bridge with the St. Augustine light house in the far distance. 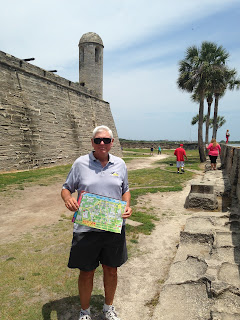 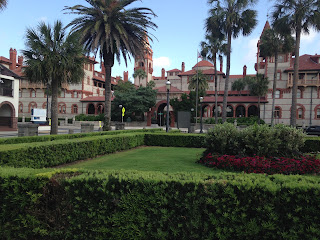 On Monday we played tourist and walked the old streets and saw all kinds of historic architecture as this city is sited as the oldest one in the US.  It has a lot of Spanish influence and its history goes back to 1565.  It was nice to see but Al and I have realized that we prefer the wildlife anchorages over city Marina dwelling.  We did get some laundry done and filled the fridge with fresh produce from a farm. 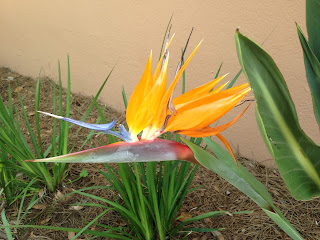 This little gem was just sitting all alone in an alleyway in the town. 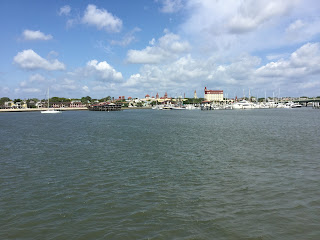 We left St. Augustine on Tuesday, May 3 which happens to be our 36th wedding anniversary! We traveled 40 miles to a free dock just north of the Jacksonville inlet passing both marshy mudflats and big commercial docks.  The change to marshes and mud means we are almost out of Florida! 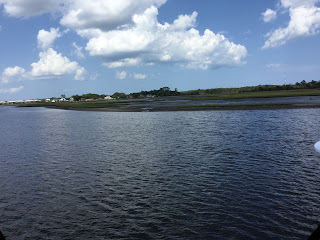 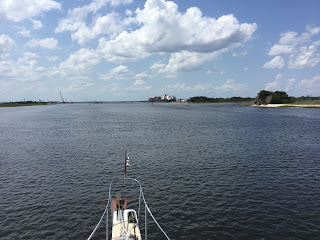 That huge container ship ahead is coming from the Atlantic into Jacksonville and is 274 meters long, 40 meters wide with a 35 foot draft. We just slowed to let it get on its way ahead of us! 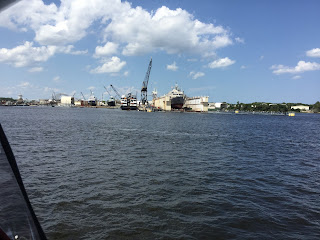 We chose to bypass the city of Jacksonville and moved onward to Cumberland Sound, Georgia on Wednesday passing Fernandino on Amelia Island. 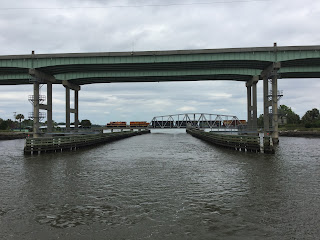 But we had to again slow down and wait for this train to pass and the bridge to open. 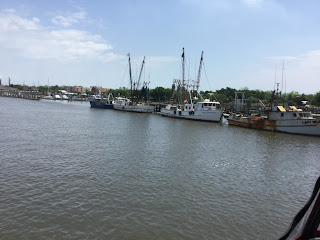 Fernandino has a fleet of fishing boats along its pier.  Just before got to this spot, we had to circle behind a large sailboat that had just run hard aground and was listing dangerously sideways.  I did not have the heart to take a picture and again, we were reminded of the sudden changes in water depth due to shoaling. 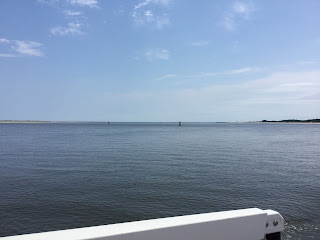