A Fun Week With a Storm and a Rodeo!

A week ago today we left our anchorage and were pleased to start out with a nice breeze and a following sea so the waves were pushing us along.  We crossed the Chesapeake to reach the Eastern shore to the town of Crisfield which they call "The Crab Capitol".  By Thursday the storm heading to Florida was named Hermine and did reach the Gulf coast as a full blown (pun intended) hurricane.  Our destination marina, Somers Cove is in a protected area and is recognized as a safe harbor for boats to duck into during storms, so it turned out to be a good choice for us to stay for a week that included a storm traveling North East, in our direction.  So our travel day deteriorated into a more windy and slightly rainy day causing a bit of sea sickness for me.  I now stock Ginger Snaps which help a bit to settle the stomach! The winds continued and the air cooled considerably on Friday and on Saturday the wind and rain came as predicted, causing us to have an "in boat" day most of the day and night.  It meant the Crab Festival festivities set for Saturday were cancelled but thankfully the storm moved on and Sunday the show was on.  So going back to arriving last Thursday, we happily docked amidst our looper friends on Corkscrew, Sum Escape (new friends for us), Sandrobber, and Act III.  We also made brand new friends aboard Barbara Ann, folks who live near Washington and still work so have only done part of the loop so far. 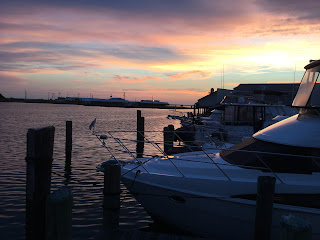 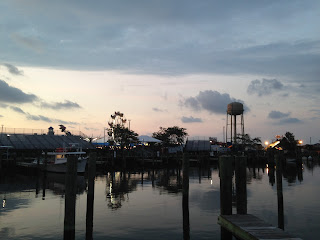 Our view across the cove of the carnival and stadium seating for the Crab Festival.  All is calm before the storm! On Thurday afternoon the dock master invited some of the guys to go out crabbing with him and they came back with a bushel of crabs.  Al opted to not go and used the time to work on our lines to secure us before the weather turned more serious.  But we did get to enjoy watching them dig in and eat their catch on Thursday night. 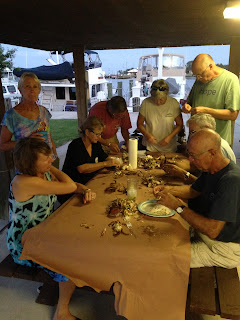 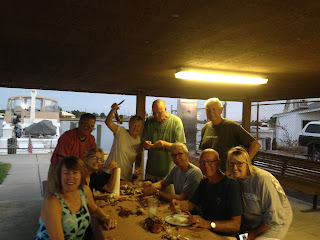 A new appreciation was formed for the people who pick crab for a living and also for the cost of buying a pound of picked lump crab.  Those nice plump lumps in crab cakes are difficult to pick out of the shell! Friday was a day to check out the town of Crisfield and reprovision. Then Friday night we enjoyed a singing competition and a stroll around the carnival grounds. 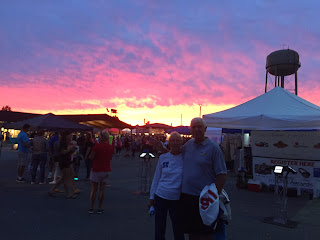 This beautiful red sky did not mean sailors delight as in the little rhyme that we all say while watching a sunset.  Instead it meant the clouds were rolling in and the rain began during the night. But the storm did move on leaving puddles and very high tides and allowed some of the events of the festival to be enjoyed on Sunday.  The first event was the crab picking contest. 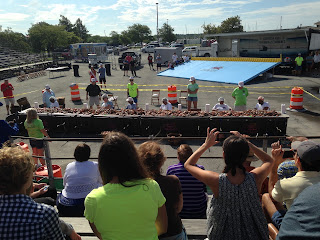 These women are pros at this and have made a living picking crabs!  They had 15 mins to fill the tin pans sitting in their laps.  The winner (second from the left) picked slightly more than 2lbs. 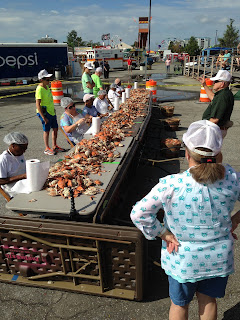 The next event was the Governor's Crab race.  Each state is invited to participate by either sending a crab from their area or buying a local crab and naming it for the race. 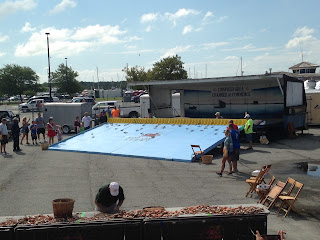 The winner was down the ramp before many of the crabs ever left their little stalls at the top! Following this was practice for the main event, the boat docking competition, referred to as a boat docking rodeo.  The captains have to fly into the cove, make a sharp turn, back into a slip and lasso four pilings with their lines. 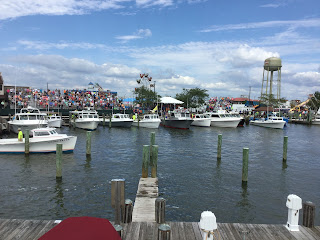 The boats are lined up before the event begins. You can see the red canvas over our dingy at the bottom of the picture which shows you just how close we were to the event. I took several videos and tried to post them on this blog but they can't be viewed.  If you go to UTube you can likely find someone else's video of this type of event.  It was a blast to watch and I am sorry I can't share it in the  blog and it happened so quickly each time, I didn't get any action shots!  This Labor Day festival stands as the highlight of our time on the Chesapeake this summer!