A Busy Visit to Washington

We arrived at Gangplank Marina, Washington, DC early evening on Wednesday 9/14 and were greeted by buddy boats Greek's Folly and Short Vacation. How fun is that to barely get lines tied and be invited to join in on docktails! It's always fun to catch up with friends and is even better to be a few days behind so they can tell us where to go and how to get there. So armed with all their knowlege I worked out a tourist plan.
We started with the Holocaust Museum and learned lots of history about Hitler and the atrocities associated with his power trip. That museum is well thought out so it was an interesting 3+ hours. We also learned about the Wright brothers and space travel history at the Smithsonian Air and Space museum during the afternoon. 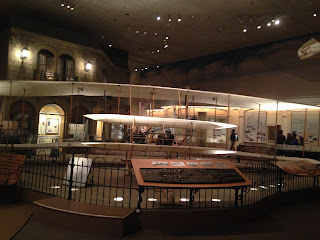 This is the original plane that flew for a few minutes at a time to make aviation history. 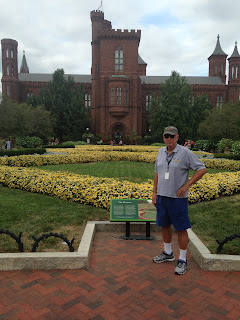 This is tired Al in front of the Smithsonian Castle where the visitor center is located. 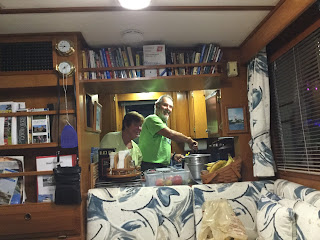 Then Thursday night we were invited to dine on Short Vacation as Pam (Short) and Tom (the Greek)
combined their culinary talents to make a delicious shrimp linguini. Tom owned a restaurant during
his working years so is a real chef and Pam is an excellent cook! It so happened that the date was September 15 which marked our one year of looping anniversary so we had friends to toast to our accomplishment!
Friday we had a personal tour of the Capitol set up through Rep Diane Black from our home district. 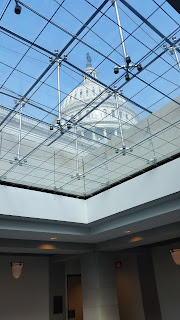 Cool pic that Al captured through a glass ceiling that our young intern guided us to find. 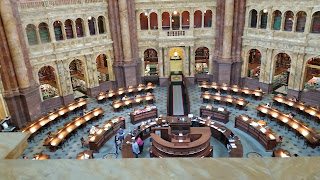 So looking down on the empty House of Representatives and seeing how many seats are there, helps one understand why congress can't get anything done! There are just to many opinions in that room at one time! 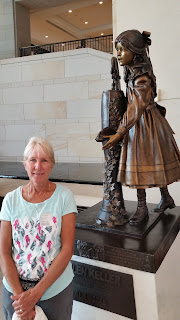 I have high regard for the accomplishments of Helen Keller! So many statues in the Capitol! 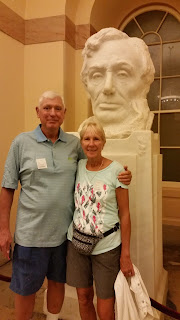 We both think Abe Licoln was a great leader and Al's nick name with his family is Abe. Part of our Friday touring included a stop at the Library of Congress to view the ornate decor and tons of incredible books but no pictures were taken. 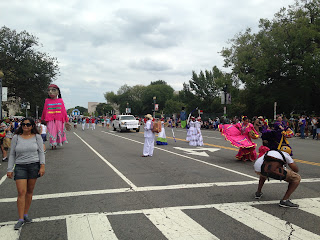 Saturday was a really long day starting with festivities and this parade for a Latin American celebration that we passed on the way to the International Spy Museum.  That museum was fun and had loads of spy tools like tiny cameras and hidden guns. From there we hiked to the National Archives to view the Declaration of Independence, Constitution and Bill of Rights. The room is very dim to protect the documents so we couldn't take pictures. Once more, we learned the history behind the documents that we likely learned eons ago and promptly forgot after the history class ended!  We were feeling pretty numb to reading any more history so we hiked some more to Union Station to board an open air bus that tours the monuments at night to view the spectacular lighting effects. We walked 25,000 steps that day per Al's phone so sitting on a bus was a relief! 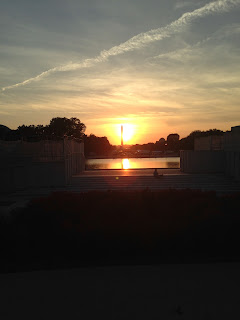 This is the Washington Monument backlit with the sun setting. 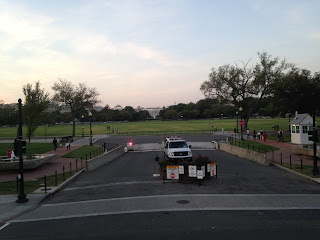 This is as close to the front of the White House as a tourist can get. 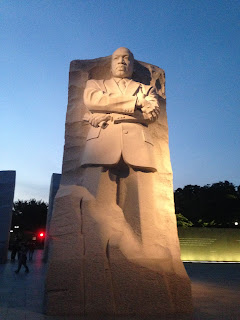 Martin Luther King looks as mighty as he was in real life and his monument is very moving. 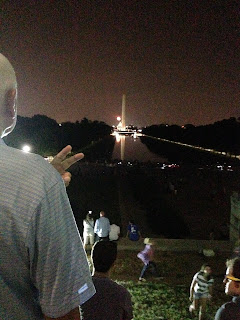 Then we had a special treat looking out from the Lincoln Memorial at the Capitol next to the Washinton Monument with the full moon rising above the Capitol! 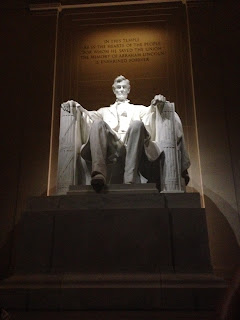 Mr. Lincoln looks mighty impressive looking down on the tourists. 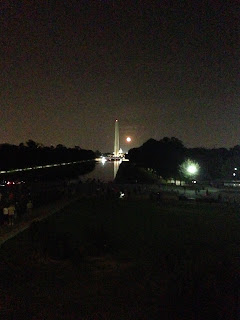 Then we took a few more shots of the moon rising over the Capitol. 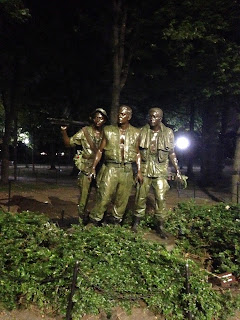 This is the statue at the Viet Nam Memorial. The wall was not lit so we went back on Sunday to view it in daylight to pay our respects to so many troops lost during that nasty war. 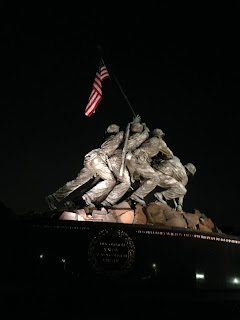 And of course you all know this famous statue of the raising of the flag on Iwo Jima by 5 Marines and one Navy Combat Corpsman. Our last stop was at the back of the White House. This photo was taken at about 9:30pm at the end of our 12 hour tour day and we still had to walk back to the Marina another 1.8 miles!!  We were exhausted but way more history smart than we were several days prior!!
We stayed one more day in DC taking it slow on Sunday and spending the afternoon biking to see some monuments in day light and traveling to Georgetown for a beer in a college town.  Al wanted to be able to say he visited the school that has been the basketball rival of his Alma Mater, Syracuse University! But alas we only made it to the town, not the campus which we learned was a bit further than we wanted to bike.
So a special note to explain why this blog is posted so late. We left DC on Monday after a long walk in the rain (we have to get our walk in) and cruised back to the Mattawoman anchorage.  Knowing that the next day, Tuesday would be a long run down the Potomac and that the weather was predicted to be calm, we chose to anchor near the entrance to the creek where we had minimal protection from the wind. But what we didn't bargain for was a fast boat flying by us in the morning apparently in a rush to get started with fishing.  So just after my glass was filled with orange juice (by Captain Al) our boat was badly "waked" rocking us sideways with enough force to knock my glass over and spill juice all over the keyboard to my IPad!  Juice was everywhere and a mess to clean up and ended the life of my keyboard.  Thankfully the IPad was in a different spot away from the disaster area. I can't figure out how to complete a blog without a keyboard!  So I ordered a new one as soon as I could and now am happily typing on it! 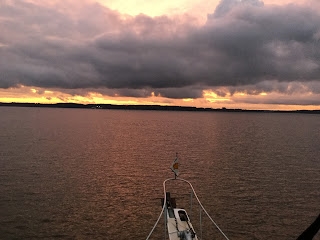 Sunset over the Chesapeake viewed from the mouth of Mattawoman Creek.