A Year and Counting...

Mentioned in the last blog is the fact that we now have passed by "our one year of traveling" anniversary by 2 weeks and 1 day. I decided to take a look at our first year and see how many nights we actually stayed out on anchor since that is our favorite thing to do.  For the year plus the days through the end of September, this is how is stands:
Nights out on anchor:  105
Nights we paid for a marina slip:  155
Nights tied to a free wall:   105
Nights in a free slip: 8.
The free wall number includes the 88 nights we spent over 2 different stops in Stuart, Fl having work done on the boat and working through the process for Al to have eye surgery and heal enough to travel.  It is hard to believe we have been living on a boat for more than a year and still have no desire to go back to living in a house!

Usually I write these blogs by telling our story through pictures.  The only picture taken since the sunset in Mattawoman ending the last blog and until yesterday is this: 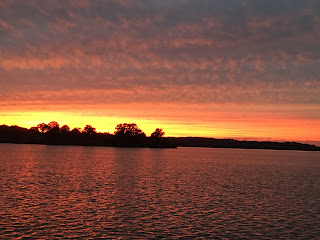 Of course another glorious sunset!  It was actually taken by Mike on California Lady during docktails in the St. Mary's River!  Let me explain. So after that lousy morning when the orange juice spilled all over the iPad keyboard we left Mattawoman anchorage on Tuesday 9/20 and went south on the Potomac with no actual plan.  The weather was comfortable with heavy cloud cover and later even some cooling drizzle and rain so we just kept on cruising all the way down the Potomac to the St. Mary's river which was about a 7 hour trip.  Why not?  A bit up the river is the waterfront campus of St. Mary's College and the old city of St. Mary which was once the capitol of Maryland.  The attraction for us was the many reports (from boat buddies) of wonderful lunches to be eaten in the college cafeteria and the reports were not exaggerated!  If I had the brain power to sit through college classes again, I would matriculate to that school and become an obese person.  The cafeteria food was amazing, international, interesting, fresh and most of the offerings were healthy! We enjoyed our Wednesday lunch so much that we had to stay another night for the Thursday lunch.  And what a treat that Thursday turned out to be crepe day so my lunch included a ham, swiss, and sautéed mushroom crepe! Another fun addition to this side trip was the arrival of California Lady on Wednesday just in time for lunch.  Walking the lovely campus and the old city/living museum of the old capitol was also a nice attraction.  Later on Wednesday, we took the dingy to the end of the river to find Tippity Wichity Island.  Yup we can say we've been there!
Then after another campus walk on Friday 9/23 we sadly left our lunch spot behind and cruised to an anchorage we have already enjoyed near Kilmarnock.  Cal Lady headed out earlier than us and found a different anchorage also near Kilmarnock so we were close enough for docktails on Friday night. Saturday we headed to Deltaville to say good by to our good buddies on Greek's Folly. We anchored in Jackson Creek but could access Deltaville via dingy so went back to places already seen when we were there in July. We had a great "last supper" with Tom and Colletta and were joined by Mike and Nancy so they could all meet. Greek's Folly was pulled to be stored on the hard for the winter.
From there we took another visiting trip further south to the Williamsburg area to see Al's college roommate Dana and wife Marion. We stayed at Wormley Marina also a place we have been.  On the way to Williamsburg, we again met up with Cal Lady and anchored together off Mobjack Bay in the Severn River in light rain.  We rafted our boats together to have docktails without a wet dingy ride! So that is why we have no pictures; we are retracing our steps.
That brings this diary to Friday, yesterday, 9/30 when we left Wormley and cruised 50 miles to Top Rack Marina at the beginning of the Virginia Cut and just past Norfolk. Yesterday was a Navy training day so a large area in the southern Chesapeake was cleared by patrol boats for safety and security.  We suddenly hear on our radio the Navy boat "Revenge" hail Corkscrew to give directions on where to move to be out of their security area.  Corkscrew are also friends who we last saw Labor Day weekend.  We had no idea they too were headed toward Norfolk so in a vast area of water, we suddenly are 1 mile apart on the same path.  This is the fun in looping!  We too were hailed by Revenge and politely told to head further west away from their training area and we even had a brief escort of a patrol boat ensuring we complied and steered clear of their space. 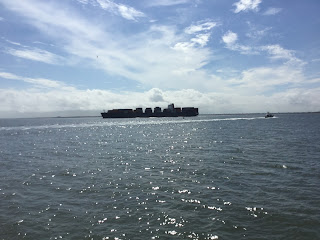 Because the the Navy rearranged all the boats in the area into a much smaller space, we came closer than we have thus far to cargo ships. We left the Chesapeake after a nice summer and entered the Elizabeth River to pass through Norfolk. 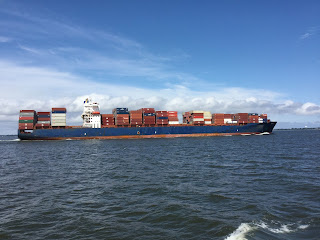 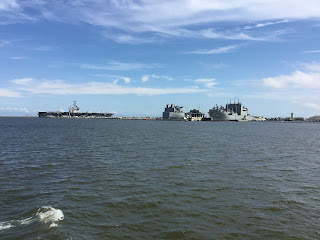 Passing the Navy yard is daunting and makes one realize how well protected the world is by our Navy; our tax dollars at work! 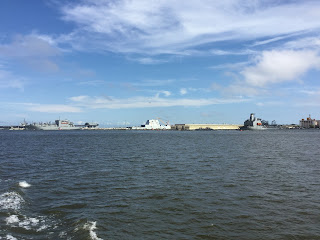 Old Navy ships in for repair amidst a much newer and stealthier ship in the middle.
So that brings me to today when we left Top Rack earlier than I like to travel (before even a glass of juice!) so we could get to a lock in the Virginia Cut before the lock shut down for high water at near high tide.  Heavy rains and who knows what else has raised the water level significantly in this area. Low level docks are water covered during high tide. The Virginia Cut is the ICW waterway that goes from the Elizabeth River to North Landing River, through a channel cut into the shallow Currituck Sound and Coinjack Bay and that will take us to the north River that dumps out into the Albermarle Sound.  We presently are sitting along a wall at Coinjack Marina in North Carolina as we make our way south back to Florida and perhaps the Bahamas!  One can only hope!
Posted by Jane at 4:41 PM