Our last day in River Dunes was spent doing a few chores to ready the boat for travel and anchoring.  Always laundry to do and water tanks to fill.  Our last day being a Thursday left us no option than to eat out at the Silo for Thirsty Thursday!  Can't believe we have been in one spot long enough to go to the same restaurant for 3 Thursday nights!  After our walk on Friday, we fired up the engines and untied lines ready to leave our hurricane hole behind.  We were armed with several web sites and emails from fellow boaters further south from us that provided updated information regarding water conditions, marina conditions and bridges that were posing problems.  One bridge in particular closed when the Carolinas experienced major flooding a week after the storm and when we left 10/21 it was still closed.  Friday was an uneventful day of cruising and because the winds were fairly strong we went further than originally planned to an area that offered enough swing room for us to move around the anchorage without worry of hitting another boat.   We stopped in Swansboro, NC early evening just for a short stop over.  Saturday we cruised through several known areas for shallow waters and shoaling but we had extra water due to the flooding and we rode the tide from high to low.  But OOPS, this guy paid no attention to channel markers (after passing us a bit too fast!). 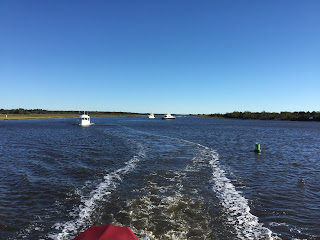 The blue hull boat perpendicular to the channel was hard aground and likely the captain was scratching his head wondering what went wrong! We tip toed around he and another boat that stopped immediately behind him, followed the markers very slowly and guided the 2 mobile boats through the proper channel around the shoal.  It pays to be prepared with first hand knowlege of the water conditions. 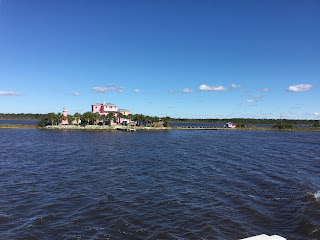 Later we passed this large pink house and note the pink boat to the right side of the picture.  Perhaps a Mary Kay consultant owns the house! 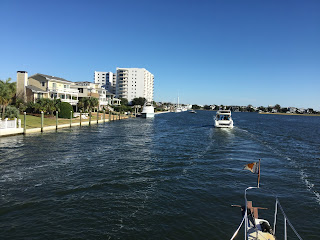 Then late Saturday afternoon, we entered Motts Channel to Wrightsville Beach anchorage. The channel is well marked but it is always nice to follow a local boat into an area that is new to us. 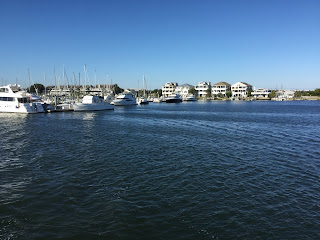 Motts Channel is lined with large beach homes and lots of boats.  Where does all the money come from for so many people to afford this kind of living? 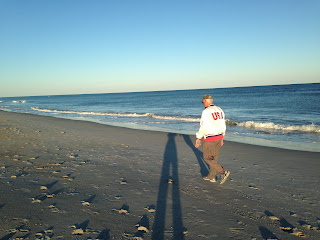 We dropped Victory Lap into the bay to take a short ride to a great town dingy dock so we could walk  the beach in a rather chilly breeze. 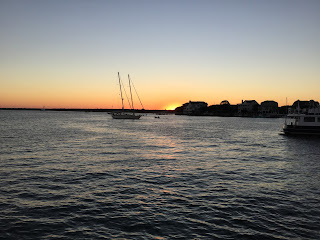 Another beautiful sunset from our anchorage. 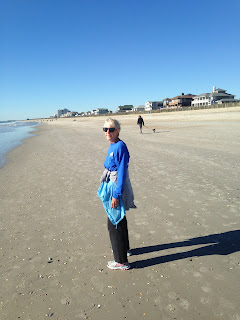 Sunday was another perfect blue sky day but you can see the layers of clothing I started with because the breeze was down right cold.  The sun and our morning walk allowed for the layers to be removed and tied around my waist.  This is another place that we have decided we could buy a condo and settle into with daily beach walks.  But likely the beach is a bit more crowded in the warmer weather. 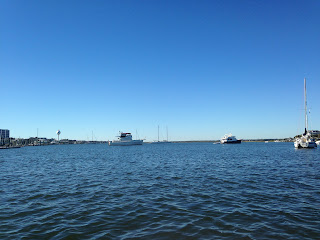 Returning to InSpeyered 2 to head the 25 miles to Southport, NC. It was an easy cruising day. 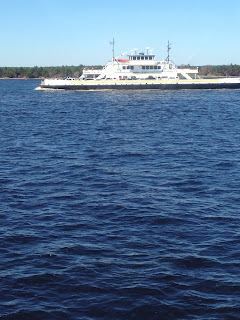 Al took this picture as proof that business was back to normal after the storm for the ferries that run people from Southport to various islands on the Cape Fear River.  We stayed in Southport Marina for 3 nights so the battery charging system and the 3 "house" batteries could be checked for problems by a technician from Zimmerman Marine Services.  While in Southport, we visited with a wonderful couple who are gold loopers and act as "harbor hosts". They provided us with the use of their car to take a run to the grocery.  And the highlight for me was returning to a hair salon I successfully tried out in June to get a much needed hair cut!! It doesn't take much to make a stop over a wonderful experience!  Plus Southport is a charming town to walk around so we got extra exercise. 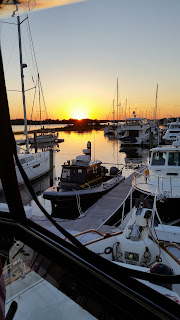 Sunset last night 10/25 taken from the bridge. This was a very nice marina. But our batteries and charging system are A-OK and it is time to leave lovely Southport.  Today we cruised another 30 miles after taking on 360 gallons of diesel fuel.  Once again we were fully prepared to navigate 2 inlets that are slowly filling in with flowing sand. It is a shame there is so little money for the Corp of Engineers to keep dredging the shoaling areas.  Some boaters fear that the ICW will become impassible in the years to come.  Once today we saw 2ft of water below our keel.  Enough to get through but nerve wracking to experience.  And once again, we watched a boat who had passed us nearly run aground in a tricky inlet.  Lucky for that boat, the captain stopped before grounding, watched us slowly go around all the proper markers and he followed us for the rest of the day!! Al even got a "nice driving through that water, Captain" from the guy via radio. 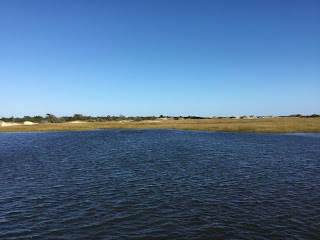 So this is our present view at the Bird Island Anchorage.  Just beyond the dunes is the Atlantic.  So I am sitting here listening to waves crash onto the beach while feeling a light wind mostly protected by the barrier island. 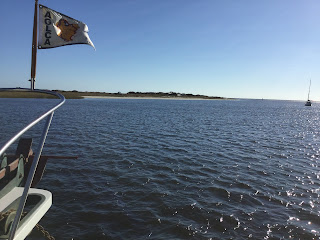 The open water is the Little River Inlet, a way to go between the ocean and the ICW. It's a nice afternoon at mile marker 340.  We are 130 water miles from Charleston and tomorrow will leave North Carolina behind us. Life is grand!