We Learned to Catch Crabs!

Our scheduled time at Somers Cove Marina was a week to get a better daily rate since we were there over a major holiday weekend when the rates are raised.  So we made the best of it and after the Crab Festival, we did boat chores and took a side trip by rental car to Asseteague Island where the ponies live and Chincoteague Island where they have an annual pony swim.  If it wasn't for the horrible biting flies and mosquitos, exploring these two areas would have been fun!  We drove to the visitors center to learn about the ponies that likely were brought over by Europeans and then eventually became wild.  They are protected in very large fenced in areas on the island in marshy areas to keep them away from people, cars and vegetation that the state wants to save from these hungry little guys. 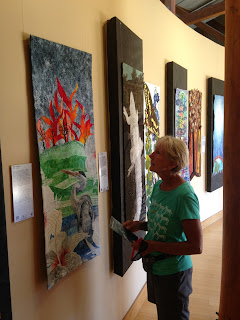 They have a beautiful display of nature depicting quilts that I thoroughly enjoyed!  We drove to a walking path and along the drive we could see the swish of tails in the far off distance but alas, we left binoculars on the boat.  We took a very buggy walk to an observation area and again could only see the swish of tails and small bodies that we guessed had to be ponies.  After being bitten like crazy we got out of there and never saw another sign of a pony! Oh well!  But we did get to walk on the beach of the Chincoteague National Wildlife Refuge and then did a slow drive on the nature road to see mostly birds we have seen from the boat! 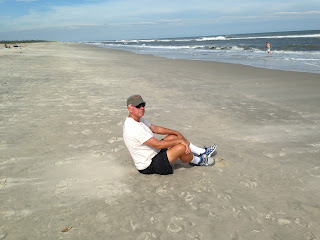 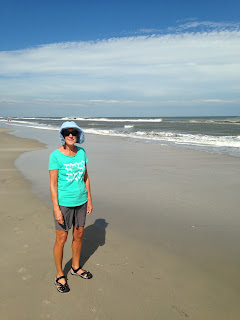 Nice nearly empty beach is always a highlight for us!  We did enjoy some fun docktail times with our friends until they all left on Wednesday. 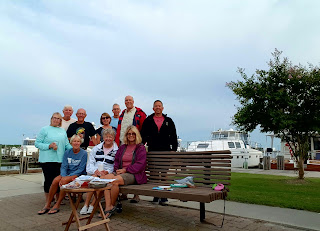 Poor Al had major chores including replacing the fresh water pump (a very necessary part of our boat) and completing oil changes on the engines and generator.  So we added on another day at the Marina and had a special treat.  The Dockmaster who took very good care of us all week has Thurdsay off and likes to go out crabbing.  He offered to take us with him last evening so we learned everything about crabbing. 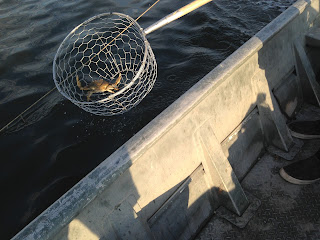 Tom has a long line with short lines hanging from it at about 2ft intervals called a trot line and he had the short lines baited with small pieces of chicken necks. (Note, some crabbers prefer to use bull lips because they are cheap and tough so last a long time!)  The line is attached to chains at each end and the chains are attached to flat anchors.  He marked each line end with floats.  Then he slowly let out all the line and we waited for the crabs to come.  Beginning at one end, Tom picked up the line with a boat hook and placed it on a roller attached to his boat.  He slowly drove along the line and as it raised up onto the roller, we could see crabs dangling from the necks.  The Dip net is used to catch the crabs as they fall off the chicken necks when they see sunlight. Interesting to know, that Tom can reuse the baited trot line several times until the necks are too rotten for crabs to eat! 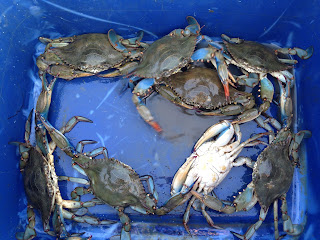 The one crab in the bucket with red claws is a female called a Sally or She-crab. Even crabs like to have their nails done!! The blue clawed crabs are males or Jimmies.  The one flipped over has a white belly meaning that is a newer shell so it just molted and won't have much meat yet to fill the shell.  These types are labeled #2 and are bought by crab companies for "lump crab" because the meat is easy to slide out of the larger shell. 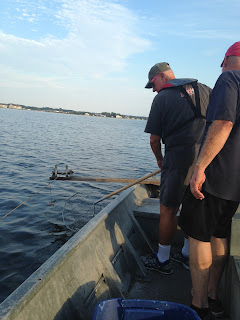 You can see the roller and Al expertly keeps his net under the line waiting for a crab to drop. 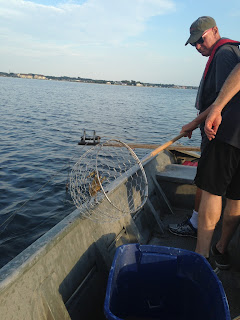 Then he dumps the crab into the bucket. 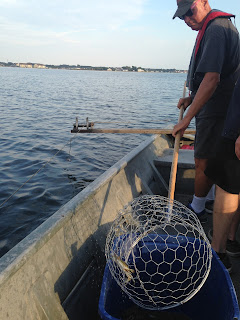 Later Tom measures each crab from the point spine on each side and if they are 5 1/4 inches wide or more, they are keepers.  The Sally's are put back into the bay because only commercial fishermen can keep those to limit how many females are harvested. The other small ones are also put back in the water. 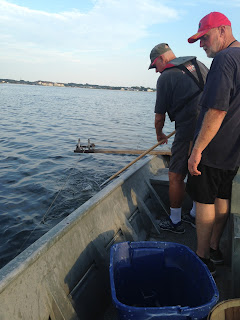 That dip net is heavy so it is best to rest it against the boat to keep it steady to avoid loosing a crab. 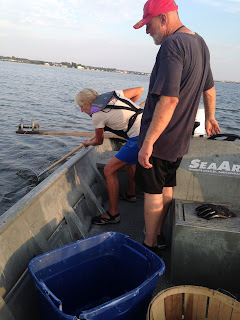 I had to put my whole body into it to stay steady and not miss a catch! 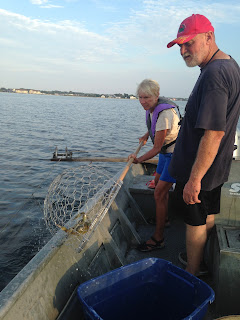 Note the serious face, praying each time that the crab would not fall on my feet! 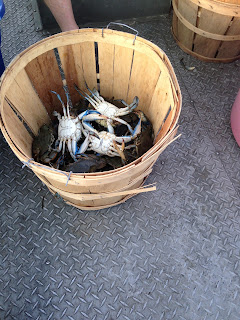 We filled this bushel basket by the end of about 2 hours of fun work!   We caught one "doubler" which is a male holding a small female, called a Sook, whose shell was ready to molt.  Once the outer shell is gone, the soft shell is her covering and she is ready to mate.  The male will hold her until her shell is hard again and she, along with the pockets of sperm she has gained will migrate to the more salty mouth of the Chesapeake to eventually spawn as many as 2 million eggs!  It is thought that once she releases the group of eggs called a sponge, she will die within months.  Males can continue to molt and grow once they reach sexual maturity as long as us crabbers don't catch them first!