The best news for us is that Al's eye is healing properly and he only has a very small gas bubble left in his eye.  That means that it should be gone in a few weeks so he can get back to reclining in his chair for naps and sleeping (more peacefully) on his back.  It also means he will be able to fly to Miami for the next recheck so we can finally get out of the state of Florida!  No offense to Floridians, but we are anxious to be moving north toward Long Island and the Northeast coast.  So today is our first day to be traveling in earnest and we were pleased to have our dolphin friends join us along the way from Vero to Cocoa. 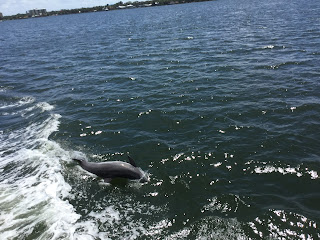 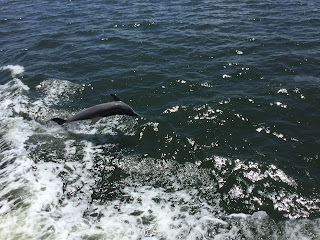 We had a beautiful day of cruising today.  But the fun times were during this past week.  After our Miami visit and hotel stay on Thurday 4/6-7 we had a tastey dinner with my college roommate Mo and her husband Harry.  Our last visit with them for a while.  And Saturday we had a great meal with Tom and Colletta from Greek's Folly while we were still staying at the Loggerhead Marina in Palm Beach Gardens.  Then on Sunday we returned our rental car and since Enterprise had no one to drive us back to the marina, a very nice man offered to help.  Turns out he was a container ship captain and was originally from Long Island.  So now we've made another new friend who loves boats and boating!  We treated ourselves to a lovely brunch, getting to the beach and restaurant via bicycles from the marina. 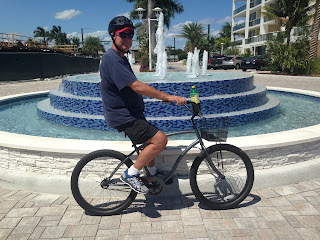 This marina is a pretty fancy place but boring because it was full of boats just sitting with few people around!  We cruised out of there on Monday and headed back to Vero to take advantage of the last few nights on our monthly contract.  On the way we passed the condo belonging to Greek's Folly folks and this time Colletta was on the dock waving us by! 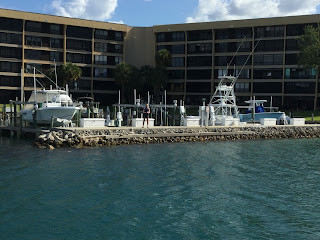 And then after tying lines and getting settled back in Vero a great surprise happened and we were ever so happy we decided to return to Vero.  There I was, walking down the dock to the office to check in and I pass a sailboat that had not been there the weeks before and on the stern I read Canton, Ohio.   That is where my first job was and as I blurted that out, a head popped up from the sailboat.  The guy asked where I worked and I told him Goodwill Rehab causing him to respond that I must have known Cathy Newman and David Richardson which were very close friends of mine and also fellow PTs.  Then suddenly I realize I am talking with John Miller who owns a medical equipment rental and sales facility and John and I worked closely together for 15 years to provide the best wheelchairs and other supportive devices to the children and adults with developmental disabilities that were under my care. 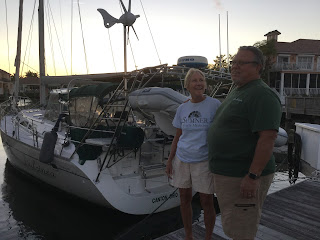 Since John and I are just a bit older than we were back in the late 70's and 80's, it took us both a minute to recognize each other despite the fact that we had worked so closely together for so many years.  And of course, who would have thunk it that we would meet in Florida on a boat dock!!  I call that more of the great looper magic! 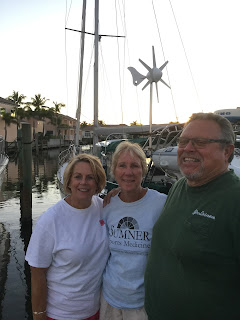 We greatly enjoyed our time this week reacquainting ourselves and sharing boating stories.  John's wife, Colleen was part of the fun as well.   It is amazing how our travels have made the world around us seem even smaller!   Al spent the time picking John and Collen's brains about travel north since they have been to Maine by boat, so we have new information to digest and use as preparation for this summer's adventures!  North bound we go!