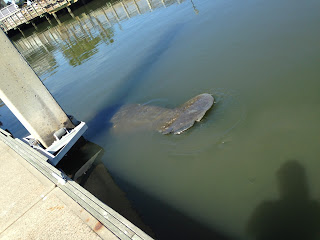 I forgot to include this picture of a manatee that I took inside the marina at Fernandina, FL.  Since they are brownish grayish, and stay under the water most of the time, they are hard to photograph clearly.  I took several shots before this one lifted it's tail out of the water.  It had lots of scarring on it's back from skirmishes with boats and perhaps sharks.
On Thursday, 4/20 we released the mooring ball at Fernandina and headed to Jekyll Island to anchor, leaving Florida in our wake.  Since we moved only 33 miles, we got into our anchorage early, had a quick lunch and took a dingy ride to tie up at the marina.  For $20 they allow dingy docking and that includes using their facilities. So we borrowed their bikes and enjoyed the ride to the beach for another beach walk, our favorite thing! 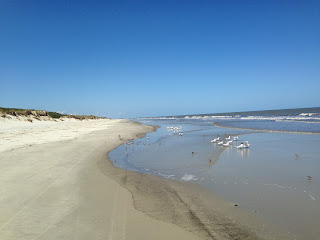 Amazing how many empty beaches exist for us to explore! 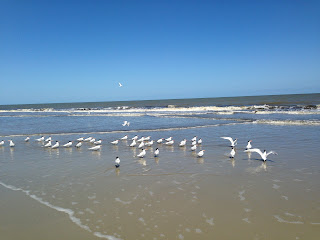 It is fun to watch the birds take off to clear the beach as we approach. 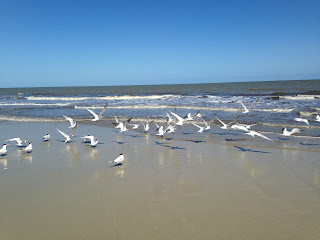 After a great walk, we biked into the cute little town center to hit up the interesting market, looking for water chestnuts that I failed to remember to buy when I walked to shop in Fernandina.  The market has a bit of everything from fresh veges to gourmet sauces and even birthday cards and Aleve for Al's aching hip.  Traveling in Georgia and the Carolinas will take some planning from this point onward because the tide can change as much as 9ft and there are plenty of shoaling and shallow areas to negotiate.  So we timed our departure from Jekyll with as much depth as possible without setting a wake up alarm!  Unfortunately high tide was hitting in the early hours of the morning.  We had to run a long day to cover 75 miles to position ourselves in Buckhead Creek anchorage for an early start on Saturday morning.  Along the way, we had to stop for about an hour to wait for the tide to rise a foot in order to pass through the Little Mud River.  I had it all plotted out that we would have enough depth at this juncture but I had relied on an ICW guide book that listed the mile marker wrong so we got to the shallow area more than an hour earlier than I had calculated.  But interestingly it saved us a bunch because we had an odd noise coming from the engine room and it turned out to be a bolt on the alternator mount loosening up.  When Al used our stopover to check the cause of the noise, he found the bolt sitting on the floor.  So that time was well spent getting that bolt squarely into place! 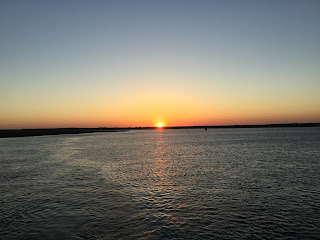 At  least Friday night provided us with a lovely sunset in Buckhead.
Saturday we had Hell Gate to traverse which is a particularly shallow couple of miles that requires at least 2 feet of tidal depth.  We also had another shallow area at Field's Cut later in the day and needed tidal water for that as well.  So we bit the bullet and set an alarm so we were moving by 7AM.  Not our favorite thing to do, but it did get us easily through all the shallows and got us into an anchorage on the New River before lunch time.  We paid ourselves for a job well done by running the dingy over to Dafuskie Island for lunch at Marshside Mama's. 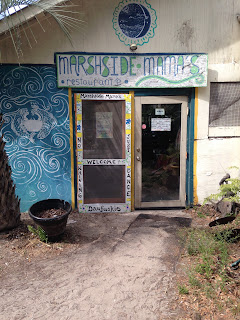 This place has a good reputation so we felt safe eating the food despite the run down condition of the restaurnt and their bathroom facilities which were nearly unusable! 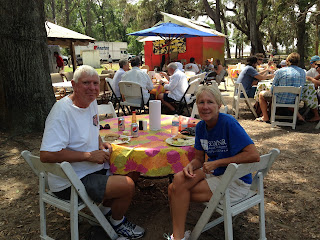 We enjoyed the music and ambiance of this odd little place and our lunches were actually terrific! 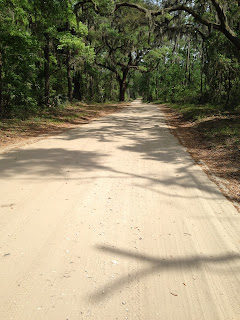 Al's hip is giving him a hard time, so I walked around the Island a bit by myself.  Most of the roads are packed sand and I saw houses with character and ones ready to fall into the earth.  This island is a mix of wealthy golf communities and locals born and raised on the island as descendants of the Gullah (freed slaves) community. 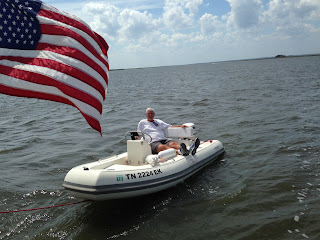 We took a run back to the boat because I could not get myself to use the horrible bathroom at Mama's  before taking my walk and Al rather enjoyed waiting for me in his "Victory Lap" dingy! 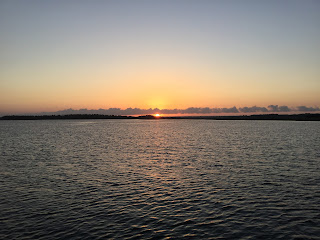 We were treated to another lovely sunset over the New River.   Our travel plans changed on Saturday with the prediction of a storm heading into the south on Sunday night.  So I got busy calling marinas and was a bit panicked when told by 5 marinas in the area of Savannah and Beaufort that they were full for the weekend.  But we got lucky when I randomly called Windmill Harbour Marina on Hilton Head Island.  It turned out to be a lovely place on yet another island to explore.  And it was a short 12 mile journey from our anchorage on Sunday morning.  Good thing Cap Al read about the entrance to the marina, because it has a shallow entryway that leads to a small lock before getting into the marina basin.  With high tide still earlier in the morning, we had to quickly up anchor to cross the 12 miles so we had just enough depth to sneak into the lock before the tide was too low.  Another job well done by the InSpeyered team. 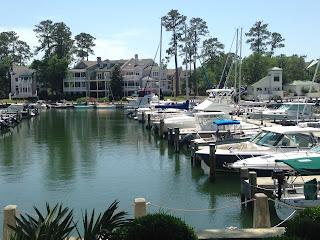 Across the water you can see InSpeyered 2 tied up against a floating dock.  Since this marina basin has a lock for entry, there is no change in tide level and no current.  Don't know why they would bother with a floating dock! 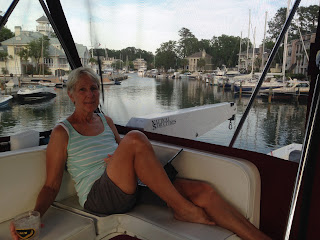 Very quiet and peaceful in this lovely place! 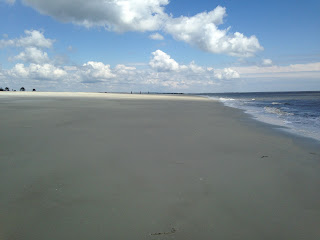 We have finally gotten the hang of using Uber so on Monday we used 4 Uber rides to get to the beach for a walk, to get to a restaurant for a nice lunch, to access the Publix and then to return to the boat.  Hilton head has many beaches and this is one that is more residential and not busy!  Another great beach walk and fun day! 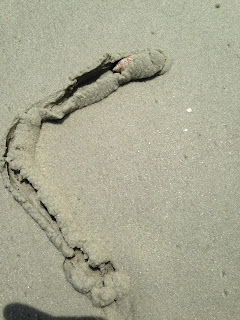 I kept seeing these little odd "ditches" in the sand and if you l ook closely you can see some type of ocean critter in a shell that has scooted along the sand as the tide went out.  Why?  Don't know! 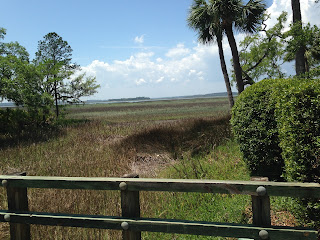 Walking inside of the marina grounds afforded typical lowcountry views of marshland. Another place where we could be happy in a condo to live out old age!! 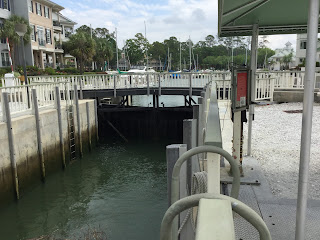 This is the little lock that brings boats in and out of the marina.  Only room for one boat at a time and not much need for lines and fenders since there is no room for the boat to move as the water level changes. 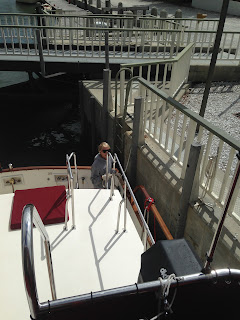 This is us in the lock on our way out on Tuesday. 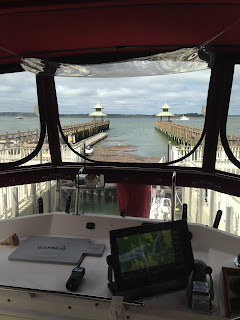 Heading back out onto the ICW to cruise on past Beaufort to an anchorage in Bull River to position ourselves for more shallow runs on Wednesday in the Ashepoo-Coosaw Cutoff, Watts Cut and finally to the Elliot Cut which has strong current as the tide changes.  We made it through all that today, Wednesday, ending in Toler's Cove Marina.  We had intended to continue on to a great anchorage until we read  reports of shoaling and we would have had to traverse water as shallow as 6ft at dead low tide and we need 4'9" for our draft.  Having a bit over a foot of water under the keel was just too risky!  Better to be safe and pay for a marina!  Plus that gets me another beach to walk on Sullivan's Island!