We Almost Lost the Captain

It's true, we had a very scary moment on InSpeyered 2 on Tuesday 4/4 as we headed south out of Vero Beach to get ourselves positioned closer to Miami for Al's upcoming eye recheck.  Captain Al was calmly sitting in his helm chair, eyes ahead and listening to the VHF radio.  We were in minimal traffic; most boats we saw were headed north for the summer.  I was not paying much attention but I looked over to the starboard (right side) and noted a boat had come up on our stern quickly and it seemed to hover 20 feet off the starboard stern which is like the blind spot on a car.  Just as I was  saying to Al that it seemed as if he wanted us to slow down so he could pass us at a reasonable speed, the guy waited no further and gunned his engines and blew past us putting a dangerous wake directly in front of our bow.  He was off like a shot so there was no time to see the name on the boat.  The wake hit so hard that it threw us sideways and Al was tossed right out of his chair (the arm rest was raised so there was nothing to block him in).  He had grabbed his full coffee mug with his right hand and tried to grab my chair with his left when the wake knocked us the other way causing Al to fall back and to the other side and he slammed into a table, hitting his lower ribcage and landing on his back on the deck.  Coffee was everywhere and he moaned so I knew he was not unconscious.  I took the helm but we were on autopilot and it took a few minutes just to find the remote control that had been in Al's hand.  I was able to get us back on course in the channel despite trembling hands, while Al slowly got up onto a bench seat to sort out his injuries.  He ended up with a bad skin tear on his ankle that has been slow to close up enough to stop bleeding and he has very sore ribs with a deep bruise on his left side.  He also wrenched his right hip so is hobbling around.  We survived but it was a wake up call for handling emergencies on board.  Some boaters just don't understand the first rule of boating; "You are responsible for your wake"!! 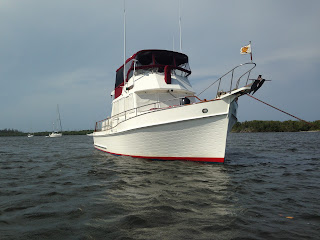 The rest of the day was thankfully uneventful and we made it into this nice anchorage in Peck Lake which is just south of the St. Lucie Inlet near Stuart, FL. 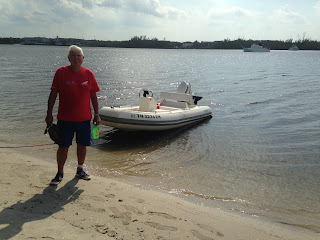 We managed to get the dingy launched and went to shore to explore the little island.  Just climbing in and out of the dingy was a challenge for Al.  Then, when returning to the mother ship we started with some more bad luck as the dingy drain plug became loose causing the dingy to take on water.  It was painful to watch Al struggle to twist around and lean down to the location of the plug with injured ribs! Then in that process, his hat flew off and was lost into the water.  Since the drain plug would not stay tight, we had to raise the dingy back onto the big boat and more bad luck lead to a circuit breaker blowing so the davit stopped working.  Thankfully, Al and I could work as a team through the loss of power and determined that just resetting a breaker was our solution.  At least we found the beautiful beach on the ocean side of the island and I had a good walk! 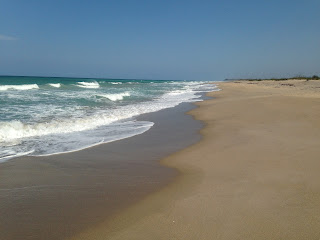 Al took a leisurely stroll to work out the joint soreness. It was a windy day so the breakers were coming hard and fast.  We love the sound of the relentless waves. 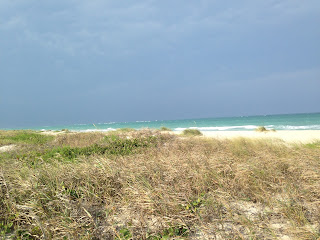 One can never tire of such beautiful views of the aqua ocean juxtaposed against a perfectly blue sky! 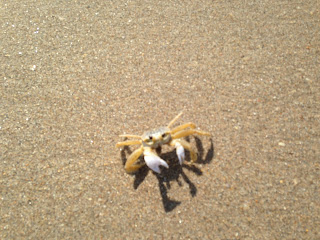 On my walk, I encountered this little crab that showed great tenacity as he scurried into the water, only to be washed back ashore by another wave.  He did this over and over again until he finally disappeared into the water. 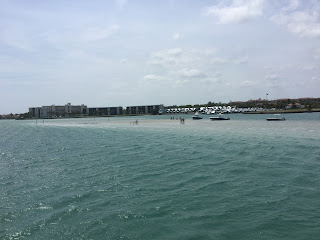 Yesterday, Wednesday, we moseyed past Jupiter and observed this great sand bar at low tide where families and pets romped around in the warm water. 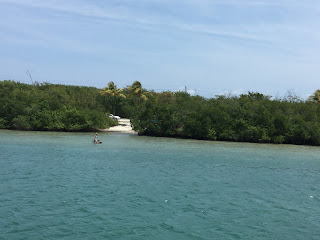 What a cool way to walk dogs on an unseasonable hot day!  The dogs looked so happy! 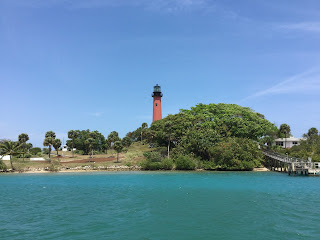 We passed the Jupiter Inlet Lighthouse which was built in 1860. And then we went under a bridge and passed the condo complex where our good friends on Greeks Folly have a "land location". 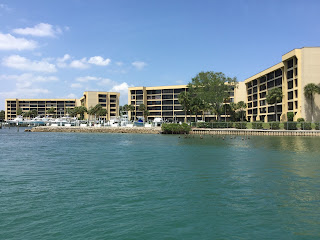 If you tap on this photo, the tiny form of Tom Kataras (who is the actual Greek captain of Greeks Folly) can be seen waving us by while standing on his dock. What a great location for a condo, right on the ICW and near the inlet so watching boat traffic is a constant form of entertainment! 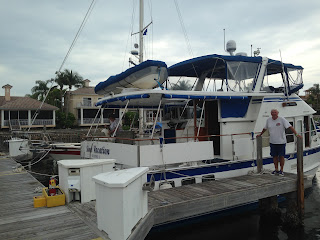 During our last week at Vero Beach we had an unscheduled and much appreciated visit by Short Vacation so we could enjoy one last docktail session followed by dinner with John and Pam Short as they are now heading north and we are hanging back for the Miami visit and eye recheck.  It will be a long stretch before we catch up with them to rendezvous again!  Friends are what makes this adventure so much fun and help us through some of the bad luck moments! I'm writing this from our hotel room in Miami, eye recheck is early tomorrow.  Thanks for following our "ups and downs" blog!