Ahhh New England by the Sea!

The days are comfortable in the 70's and low 80's with no bothersome humidity and the nights are cool in the 60's for sleeping.  The coastal towns all offer interesting old homes and churches, nice streets for walking and too many good restaurants!  We have our weather and wave websites to help avoid uncomfortable cruising days since we are running in much more open ocean water and have agreed to try and keep our cruising distances at 40 miles or less per day.  Doesn't get any better than this!!  We left Cape Cod on 7/10 and headed to Plymouth, MA.  We had a cool and overcast day which lead to a rainy day on Tuesday so we spent 2 nights on a mooring and had some time to relax. 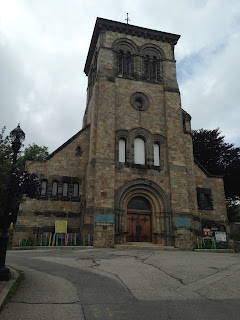 I walked the streets of Plymouth searching for history of the Pilgrims.  This is First Church, built upon a hillside where the Pilgrims met to worship.  Interesting fact learned on our whale watch tour, the Pilgrims landed on the Cape at Provincetown before continuing their travels to Plymouth. 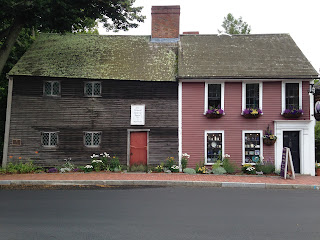 This house was built in 1640.  Amazing that a structure that old has survived storms and tough winters! 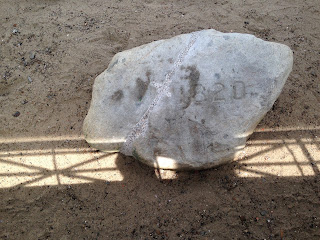 This is the unimpressive Plymouth Rock!  The date 1620 is engraved into the surface. 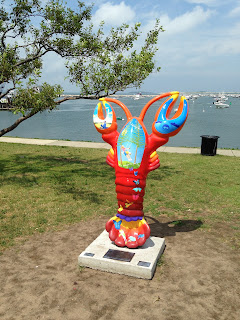 Lots of towns have statues of some type of animal or ocean critter as their mascot which are gaily painted.  Plymouth supposedly has 21 of these lobsters scattered around to keep the tourists searching.  If you look closely (maybe enlarge the photo) you can see InSpeyered 2 sitting in the harbor between the lobster's claws. 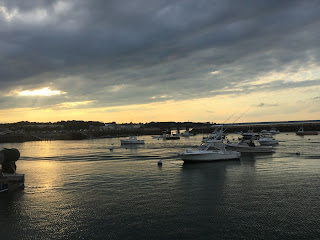 Peaceful night with clouds to make the sunset more charming. 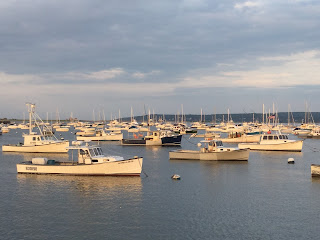 Plymouth harbor was chock full of working lobster boats.  We don't tire of this view.  On Wednesday we moved on to Boston where my nephew lives with his girlfriend.  Boston is a town we both have been to plenty of times so we chose not to do much of the tourist thing. But it was very novel to get to Boston via water on a lightly foggy/hazy day. 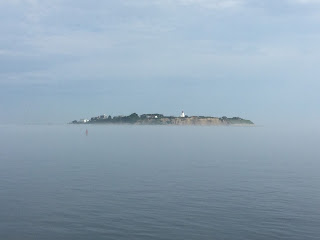 Leaving Plymouth harbor was eerie with sea mist on the water.  This island looks like it is floating on a cloud! 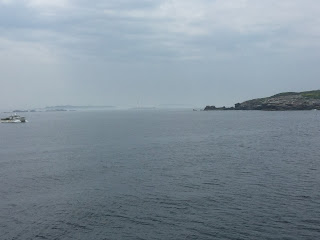 Neither of us realized before taking this cruise, that the entrance to Boston Harbor has lots of small islands to skirt around.  It is a much more civilized harbor compared to NYC! 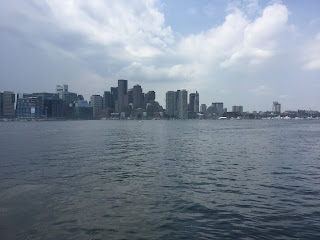 The Boston skyline is not terribly impressive.  We were lucky to find an open slip at Constitution Marina located near the USS Constitution and right on the Freedom Trail leading to the oldest part of Boston.  We paid dearly for this location but we enjoyed the splurge! Prices at marinas have been steadily climbing since we left the Chesapeake so we are kinda getting immune to paying a couple hundred dollars for a place to tie up! 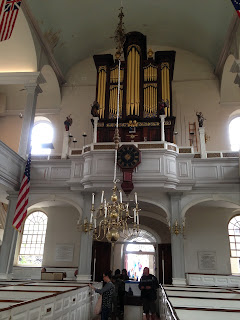 I walked the Freedom Trail for my daily walk and stopped in to see The Old North Church. 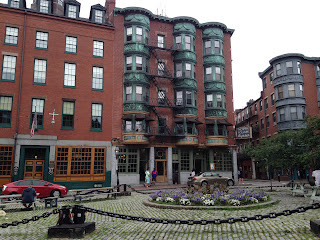 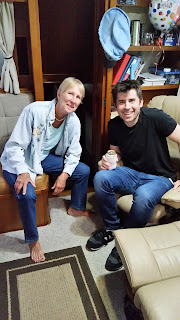 My nephew Matt met us at the marina to see the boat and then we slogged in the rain to a nearby, very old tavern built in 1780, The Warren Tavern. 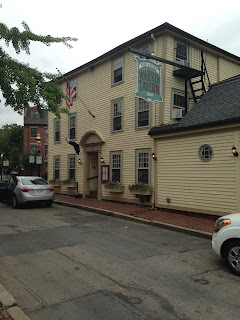 I went back on a day when the rain stopped to get a picture of the Warren Tavern.  We enjoyed a second dinner with Matt on Thursday as well, choosing a Mexican place near where Matt lives in Cambridge. Gotta have Mexican as often as possible! We moved on to Marblehead, MA on Friday with a short cruise of about 20 miles. 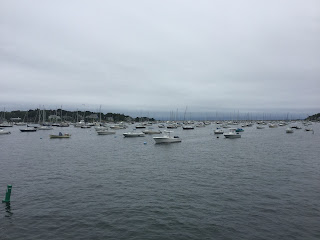 Marblehead's harbor, similar to Plymouth is full of working lobster boats with a few pleasure boats. 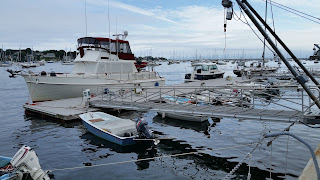 We felt lazy and chose to tie up at the town dock rather than taking a mooring ball.   So much easier for getting to land for daily walks! 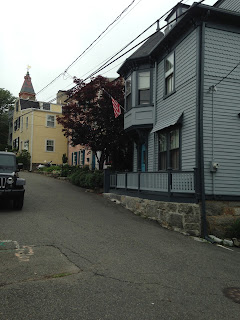 Marblehead has lots of narrow roads with hundreds of old homes built right next to the street and with minimal yard area.  It seems they huddled together back in the 1700's for warmth and comfort! We had a tastey pan fried fresh haddock meal for a late lunch at Maddie's Sail Loft, a local "hole in the wall" tavern revered by sailors who participate in the annual Marblehead to Halifax sailboat race. 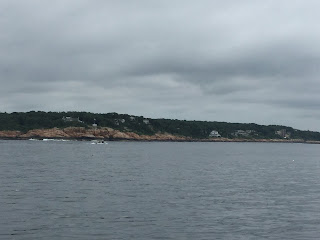 Cruising from Marblehead to Gloucester gave us views of the New England rocky coast. 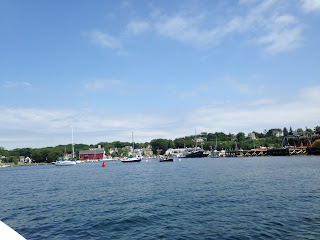 We took a mooring in the Southeast harbor of Gloucester with this view of the entry to their inner harbor.  This is a big fishing town made famous by the book "The Perfect Storm" by Sebastian Junger about the tragic loss of the Andrea Gail, a local commercial fishing boat.  It also is the home to Gorton's Seafood founded in 1849.  The town has older homes but is not as quaint and lovely as Marblehead. 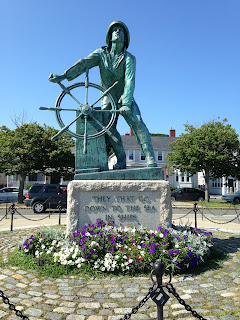 This is a fairly famous monument to sailors lost at sea who hailed from Gloucester.  It's called "Man at The Wheel". 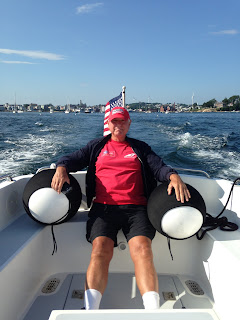 And this is a pretty famous ships' captain relaxing in the launch after an afternoon stroll around Gloucester! 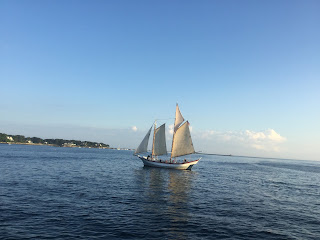 This just seemed so New England but it actually is just a tourist ship traveling around the harbor. 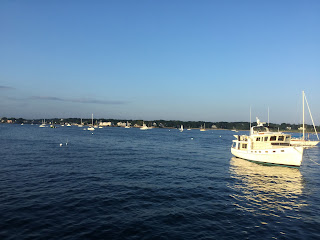 The sun glinted off our neighbor in the harbor, again, creating a "New England" scene. 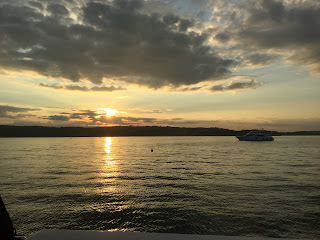 Another perfect sunset to end our one day visit to Gloucester.  The next day is Sunday when we headed into New Hampshire. That will be the next blog.