We had a fairly easy cruise of 42 miles from Shelter Island to Block Island 7/3/17 with some wave action but nothing uncomfortable and arrived into the Great Salt Pond inside the Island with the view of about 2,000 boats on moorings and on anchor.  The Island has about 1000 residents year round but the summer population is much larger and July 4th brings the population up to about 20,000 people!! 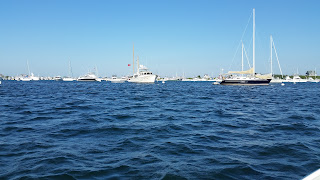 It was a bit unnerving to find a space between boats that was open enough for a safe anchoring but we managed after 2 tries.  Our special treat was the plan for our good friends from home, Jill and Don Clausen to arrive later that afternoon by ferry from Narragansett.  They had spent the weekend in Boston for a family reunion and wanted to drive somewhere to meet up with us.  Turned out getting to Block Island would be the best way for that to happen.  So we spent the early afternoon readying the boat for guests and took the dingy to shore to pick them up.  Just as we were leaving, a dingy came along side and hailed us.  It was Jim from the rowing skiff that we met in Delaware City.  He had completed his challenge of rowing from Miami to NYC and was taking a long weekend break on his sailboat before returning to the working world.  How small our world is for Jim to happen to be on Block Island at the same time as we were and to spot our boat amidst a vast array of boats!!  Unfortunately we didn't have time to chat then and never did find time to meet up!  Perhaps another time! 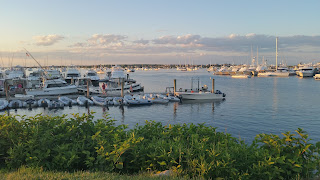 Finding a spot for the dingy was no easy feat as you can see the dingy dock was packed solid!!  Boaters were double "parking" and climbing to the dock over other boats!!  We waited patiently and squeezed in when a dingy left while Jill and Don took a taxi from the ferry dock so we could all meet up at a popular restaurant, The Oar.  Amazingly easy to rendezvous on an island!! 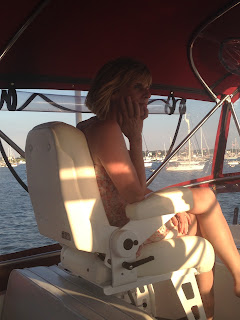 Jill and Don have been on the boat when she was at our home port but only for day parties.  So this was a new experience to sleep on her for two nights as our special guests.  Jill particularly enjoyed the view from my captain seat!  Our plan had been to return to shore for dinner out but the thought of trying to find dingy dockage kept us in for the night so we had some of the great tuna we had purchased in Beaufort, NC instead and enjoyed a peaceful night on anchor. 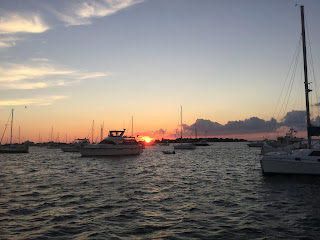 Always a treat when we have a lovely sunset to enjoy as well. 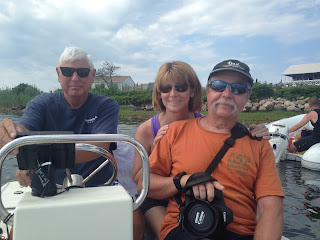 July 4th was a beautiful day.  We taxied over to land so Jill and I could take a morning walk and we were greeted by lots of folks gathering for the annual holiday parade.  Following the walk, we hurried back to the boat to clean up, have breakfast and head back to shore to catch the parade. 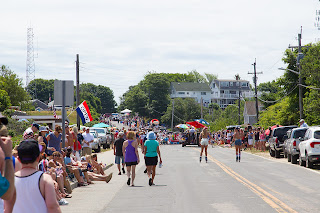 With all the time it took to beach the dingy (no room at the dock!) we caught only the tail end of the parade.  So Jill and I followed, making quicker time than the parade marchers so we managed to get toward the beginning to see most of the floats and lots of people in great costumes to represent the parade theme of "memories of past years". 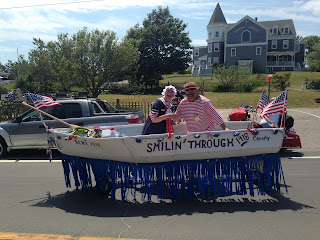 This was my favorite float.  These two folks held on to their boat and walked it in a curving pattern to depict floating all the way along the mile+ long route.  It looked like a whole lot of work but they had great fun! 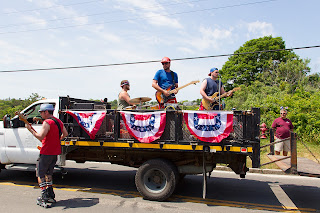 This rock band ended the parade with the classic fire truck following and bellowing its siren every so often to add to the noise and frivolity! 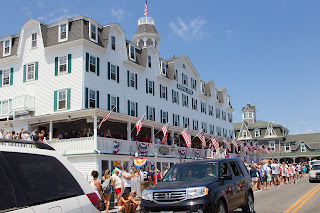 The parade ended in the town area full of people, stores and restaurants.  This is a shot of a beautiful old inn with a lovely wrap around porch full of partygoers. 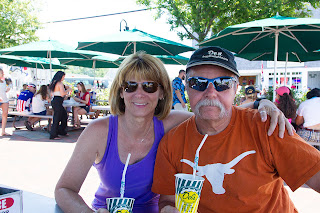 After all that walking, we needed a rest stop for some icy lemonade before heading back to the dingy. 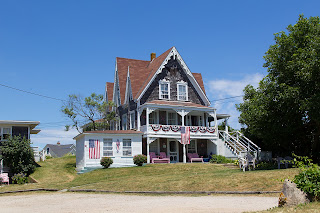 Don is a professional photographer so most of the pictures in this blog came from his constant click of the camera along our way.  Had to include this quaint, typical New England home decked out for the holiday.  Don's website is called Trapthelight.com.  Check it out for tons more pictures if you have interest!  We took our time going back to the dingy and stopped for a nice late lunch and beer at Dead Eye Dick's. Then made our way back to the boat for a rest.  Amazingly, as we approached our boat, a man stepped out and called to us from the Catamaran anchored next to us and asked if we had been in Ft. Lauderdale in February 2016.  And then I recognized his boat, Half Moon, as one we had been near when we were stuck for 10 days that February waiting to run outside around Miami on our way the the Keys.  We had invited he and his wife to join us one night for docktails and shared travel stories.  Once again our boating world gets smaller by the day! 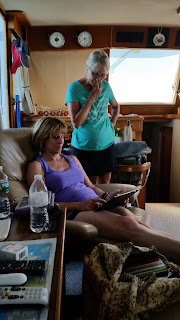 Jill was quite interested in what we use for navigation and determining weather conditions to plan our cruising.  So I am walking her through the Active Captain app that is our "boat bible".  After our rest, we voted to return to The Oar one last time for a beer and snacks to enjoy the harbor view and watch the sunset. 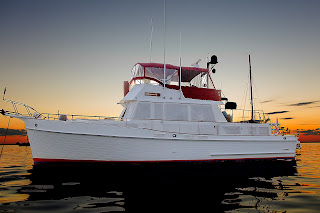 Don snapped this picture as we returned to the mother ship for the night.
After much talk and planning about the itinerary for the July 5th departure we decided the most fun plan would be for Jill and Don to stay on the boat rather than take the return ferry and we would take them back to Narragansett to get their car for their drive back to Hendersonville.  It was on our way to the Cape with a short deviation to a dock to drop them off. 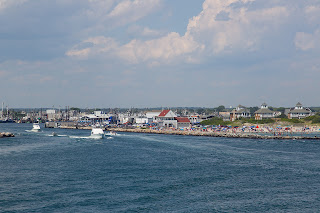 So we got a decently early start and cruised for a bit over an hour, entering the Point Judith Inlet. 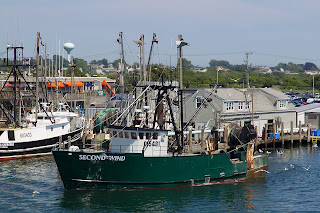 We pulled into a commercial fuel dock just long enough for Jill and Don to get ashore with their bag and camera equipment. 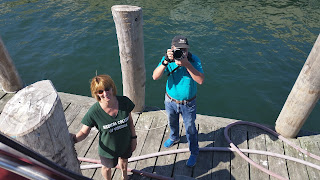 Part of the reason for bringing them to their car was so Don could take photographs of our boat with her new canvas, buffed body and shiny teak, along with the relatively new dingy.  We are almost out of boat cards and want an updated photo for new cards.  Since Don took the original photo on our cards, it seemed fitting that he should be the one to take the replacement shot!  So we say a fond farewell to previous landlubbers who are now officially part of our looping adventure!
PS: the fireworks on Block Island were set off on July 2nd so we missed a July 4th spectacle and had to settle for watching TV fireworks in Washington and NYC, oh well!