It sits looking
Over harbor and city
On silent haunches
And then moves on.

We have been warned by many boating friends to expect foggy conditions in Maine that can be a challenge especially when negotiating between lobster pots.  Well it's true and within any one day the fog can roll in fairly quickly and then blow away just as quickly.  And the cycle can repeat itself multiple times during a day.  We only have a few pictures when we are in fog because it takes all 4 eyes to stay focused on the water to be sure we don't run over a line to a lobster pot.  Down south, the crab pots were more predictable based on water depth.  But the lobster pots can be in 30' depths or 200' depths and they appear out of nowhere without a pattern. 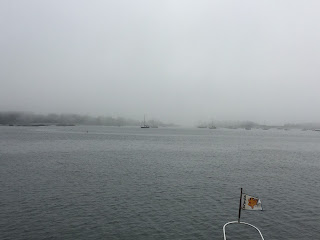 So on Tuesday 7/18 we had fog on and off over the time it took to cruise 40+ miles from New Castle, NH to Biddeford Pool, Maine. It was fairly clear until we got to the point of turning up toward Bitteford and then the fog laid down and we had to carefully and slowly tip toe into the harbor where the pots were more abundant and we were in unfamiliar territory. 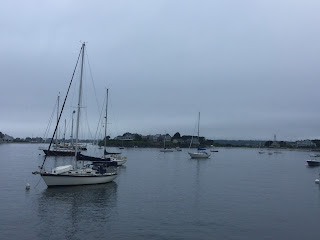 Then the wind blew the fog off, leaving over cast skies and we could see all around the boat!  Later I went to shore to pay up for the mooring, see a bit of quaint Biddeford Pool and check out the only market to see if a vegetable for dinner could be purchased. (Yup, bought their last 2 red peppers to roast!) 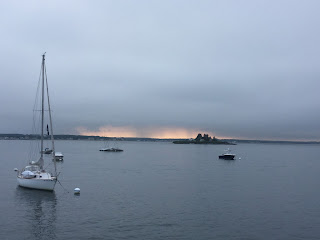 Then the fog rolled back in making the sunset an interesting display of glowing light. 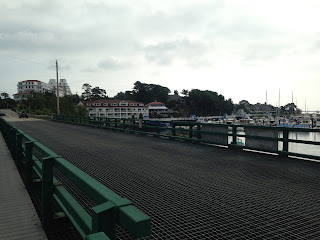 Going a bit backward on the timeline, we treated ourselves to this fancy marina associated with a Marriott resort in New Castle, NH for two nights on Sunday and Monday 7/16-17.  This was our one and only stop along the short New Hampshire coast and we chose it because Al had read about it many times when dreaming about this adventure.  It also was a nice respite after rocking too much in the Gloucester harbor which was not a "No Wake" zone much to our chagrin!  So we tucked into the marina in front of the Wentworth By the Sea Resort early Sunday afternoon. 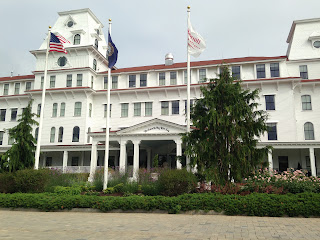 I enjoyed walking the grounds around this lovely old resort and we had a nice evening of drinks and appetizers on the veranda soaking up the resort atmosphere. 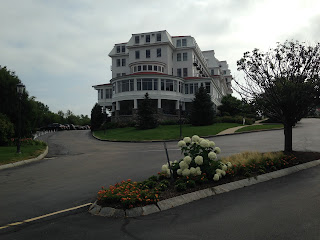 This part of the resort faces the water.  We had access to the pool, lovely marina bathrooms/showers and a nice little dockside restaurant that served good breakfast sandwiches.  We also had access to a courtesy car so on Monday we made our way into Portsmouth to explore the town, walk for exercise and then find our first lobster roll lunch at Sanders Fish Market. 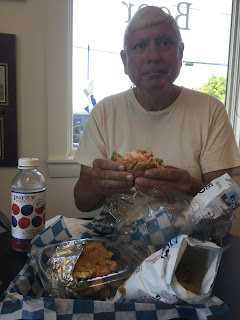 We were not disappointed but this is only the beginning of sampling lobster rolls along the way! 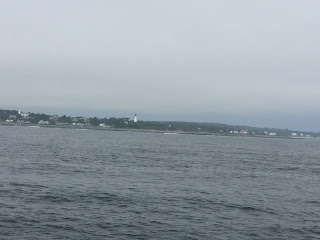 We headed out of New Castle late morning on Tuesday to wait for the fog to lessen and went a short 20 miles to Biddeford Pool, ME.  Photos of that mooring field are above. On Wednesday 7/19 we left to head to Portland, Maine first thing in the morning. It was a lovely morning but the waves were higher and more often than predicted.  Thank you Motioneaze for making these days doable!! 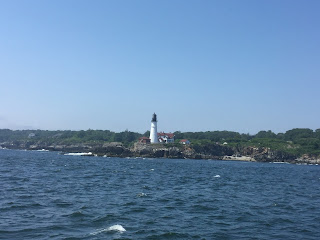 We are finally in the grand state of Maine, our destination goal for this summer's travels! We passed the Portland Head Light and heard its fog horn as the day included that on/off fog situation so despite this clear shot, the horn sounded because the fog was so unpredictable.  This coastline is sooo Maine! 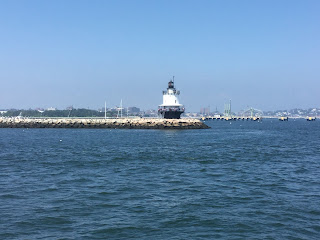 We cruised past Bug Light as we entered the Portland harbor yesterday and it seemed all was right in our world.  But I made a mistake when looking at moorings and making the usual calls about availability and did not ask if the mooring we chose through Portland Yacht Services was in a "No Wake" zone.  And guess what?, it isn't, so we have been rocking mercilessly with fast boats and ferries passing by.  But last night it calmed because heavy fog rolled in as sailboats gathered to race.  It was kinda fun to be encircled by waiting sailboats which we could barely see with the dense fog (thus no pictures).  And today, Al got me off the boat for the day by renting a car so we could go to LLBean in Freeport and also visit the light houses via road trip. 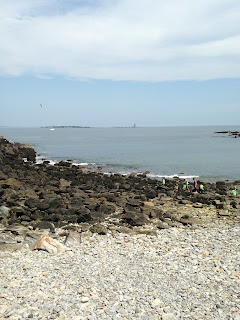 The walk around the Portland Headlight was lovely and provided a great hour long exercise walk along the rocky cliffs. 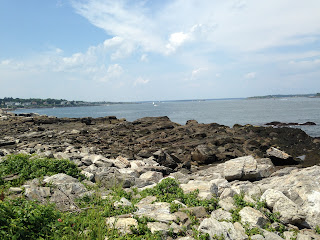 These shots are looking out at the waterway we traversed to get into Portland yesterday.  So fun to see from land what we saw from the sea! 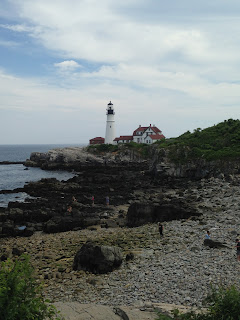 And this is the same Portland Headlight photographed on our way in.  We enjoyed our second tasting of a lobster roll at a food truck in this park that has been rated quite highly on Trip Advisor and it actually was better than the last one we had a few days ago.  We will continue this tasting extravaganza as we move along Down East! 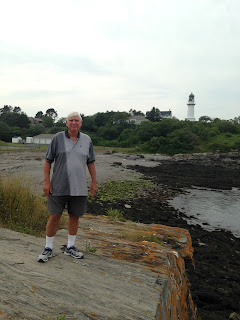 Al had a good day meandering along the cliffs.  He is standing in sight of the Cape Elizabeth lighthouse that is no longer functional.  It was a nice day on land and now we are back on our rocking home and look forward to leaving tomorrow to head to Boothbay Harbor for Al's special day.  He turns 65 tomorrow and officially will get the senior discount at most places we visit. (Gotta find the up side of things!) Happy Birthday Captain Al!  This adventure is all because of your 30+ year old dream!!