Lots of people have wind chimes that imitate the sound of buoy bells and we have one of those on our back porch.  I love to hear it chime when the wind picks up.  Now we are hearing them for real as we pass channel markers and the sound is now part of our cruising experience.  When the fog rolls in, the clanging can be very reassuring knowing we are following the channel properly and they do their job well.  This leg of our journey is taking us from one harbor town to another.  We mostly have made short hops between islands each day. 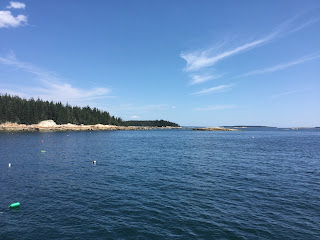 On Tuesday 8/1, we left our anchorage near Castine and cruised southeast out of Penobscot Bay into the Eggemoggin Reach to Swan's Island, a rather large island once owned by a gent with the last name of Swan!  The island is named with an "s" at the end but no apostrophe to denote ownership but the islanders all spell it "Swan's" as their hailing port, so that is how I will refer to it. 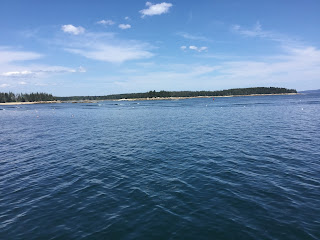 It was a calm and clear day and brought us to a beautiful and well protected, small harbor called Buckle Harbor.  We shared it with 5 other boats for the night. 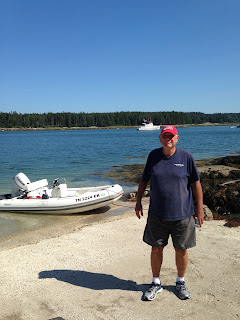 In the afternoon we took Victory Lap over to Buckle Island to huck around and get some exercise. 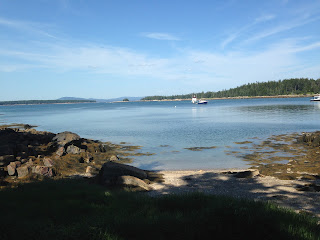 InSpeyered 2 enjoying the sun in our little harbor. 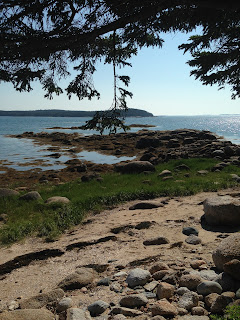 Walking a trail on the island afforded some great views of rocky beaches. 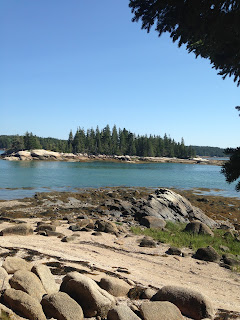 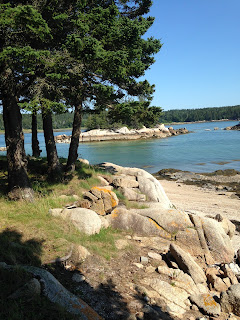 This island is not inhabited by humans so the call of the loons could be heard and a few skittish wild deer were fleetingly seen. 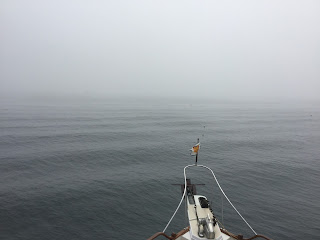 After a sound sleep in the quiet harbor, we woke to a weather change!  But we decided we could navigate around Swan's Island to the south side to tuck into Burnt Coat Harbor despite the fog.  This is where those clanging buoy bells come in handy! 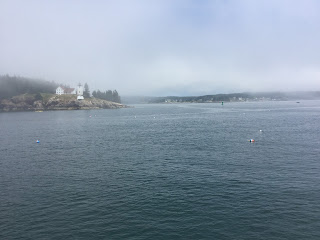 Our first view of the harbor entrance and the Burnt Coat Lighthouse which is still functional. 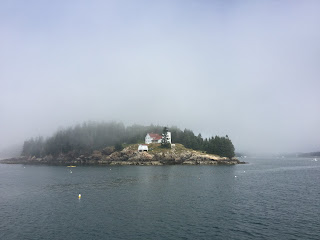 The lighthouse in a cloud!  Imagine living there in the winter time!  The notes from the lighthouse museum mention how hard it was to keep the light lit because they used whale oil that would become solid in the cold. 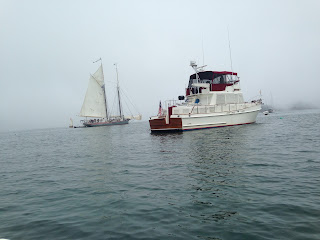 InSpeyered 2 tied to a mooring ball with a schooner coming in packed with tourists. 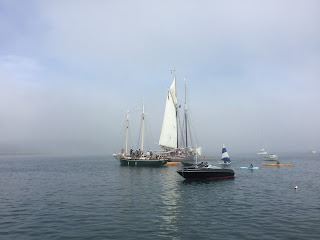 The Sweet Chariot music festival was in town that night and we were treated to "Shanties on Shipboard" as musicians and singers toured around the harbor on a sailboat, gaily singing their favorite tunes. 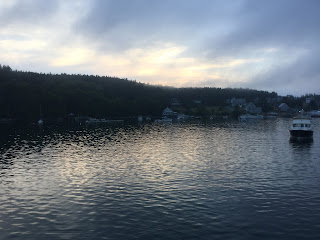 Then the harbor quieted and the fog lifted for another peaceful night in Maine. 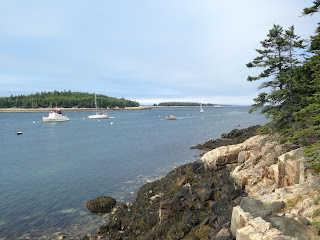 On Thursday 8/3 we cruised a short hop further east to Frenchboro Harbor on Long Island which is actually fairly round in shape! This is a very isolated town with lobster fishing as the primary (perhaps only) way to make a living.  We read that they managed to keep a tiny school funded by increasing the child population by providing foster care for 14 children sometime in the 1980's! And electricity didn't get on the island until sometime in the 1950's! 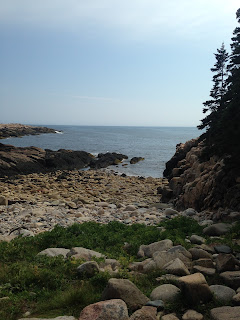 A walk around the island brought me to this rocky beach. I keep thinking I will see seals lounging on the rocks!  But not today! 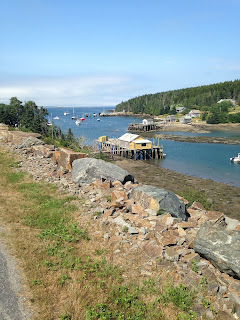 We had lunch at the little restaurant on the pier down below where this picture was taken and Al made the right decision to have another lobster roll.  It was the best yet with very sweet meat, likely freshly pulled out of the water the day before. 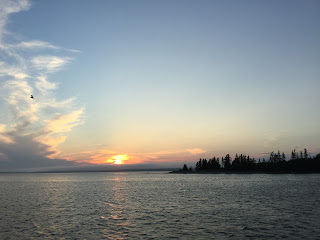 It was another beautiful and calm night with a lovely sunset.  The nights are chilly as the temperatures drop into the high 50's. 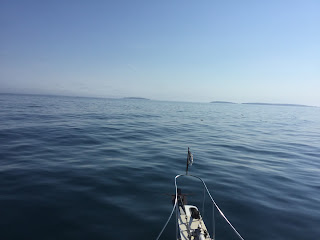 On Friday we turned north to head into Northeast Harbor on Mt. Desert Island, home of Acadia National Park.  Believe it or not, in this picture are fins of porpoises.  They are very hard to photograph because they are small, move fast, and avoid boats! But we also were treated to what we think is the surfacing of a Backfin whale not far from our boat!  Since that was completely unexpected, there was not chance for a picture. 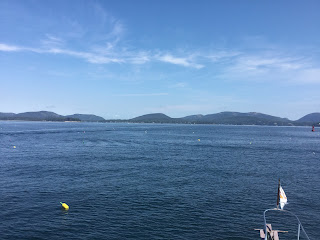 The grand mountains of Mt. Desert Island loom ahead on this clear and calm day.  Our looper flag hangs limply without wind to whip it up!  But we are heading into a protected harbor to tie up to a mooring for several nights as WindAlert shows some higher winds and rain.  We need to take on water and empty the waste tank, (not so fun) jobs for the morning!  Then on to explore the National Park and buy a lifetime pass for Al before the price goes up drastically at the end of the month.  Apparently congress didn't think us seniors were paying their fair share for lifetime passes!