The whole loop adventure and this added side trip into New England has always been a long term dream of Al's and I am simply along for the ride and the views of wildlife.  So all of our stops in Maine have been picked by Al and he hasn't made a bad choice yet!  For his Birthday, I gave him a wonderful Maine Cruising Guide and it has helped in choosing our path.  So after buying 2 new deep cycle marine batteries to run the 12 volt system, we finally got underway to leave Mt. Desert Island on Friday 8/11 in the early afternoon. 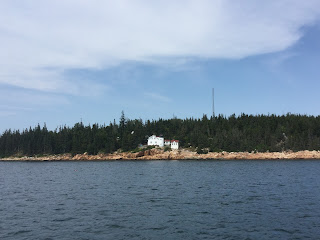 On the way out of Western Bay which is south of Mt. Desert, we passed the Bass Head Lighthouse and proceeded toward Merchant Row, one of several channels that run east/west amongst a plethora of islands.  There seems to be two ways lobster fishermen chose to mark their traps and for the most part we see single, colorful buoys.  But in the area we navigated on Merchant Row they prefer double markers and sometimes they are spaced widely apart.  The trick is to identify the pairs and not split them because there is a line below the water connecting them just waiting to snag a propeller! 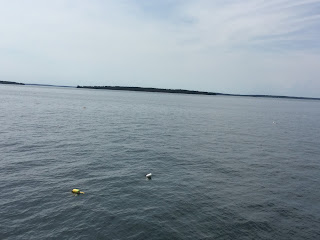 It was hard to take a picture of a pair spaced apart that would allow a boat to pass but this is my attempt to do that. 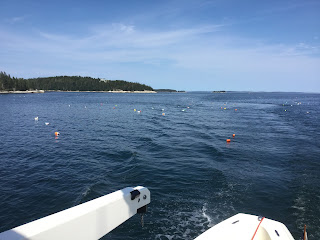 And at times there are plenty of buoys and many of these are pairs.  Who belongs to who?  But with all 4 eyes keeping track of buoys we made it to a beautiful anchorage between McGlathery and Round Islands.  Internet service has been spotty but somewhere along this 2+ hours jaunt, Al got an email from Winter Harbor in Brewerton, NY where we want to put the boat in a heated storage building for this winter.  They only had one more spot available and they wanted us to mail a check immediately to hold the spot.  And there we were in a quiet anchorage.  So Victory Lap was dropped into the water quickly, the check was written in haste and off we went 3 miles to Stonington where we could find a post office to get our check in the mail.  Success!! 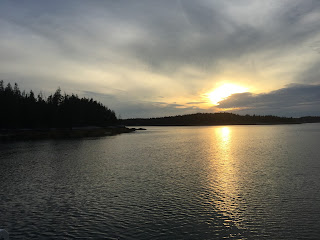 And then rewarded with this peaceful evening knowing we had our winter plan set! 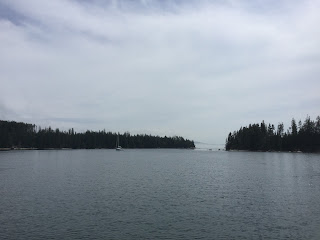 We woke to an overcast, rainy and foggy morning but our anchorage was just so peaceful. 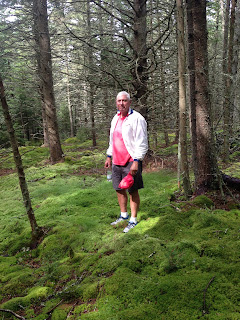 Later in the day, the sun peaked out and we took the dingy to McGlathery to try and find a trail that Al had read about.  The forest was silent with the boggy moss beneath our feet but we never found an actual trail so didn't venture far so as not to get lost! 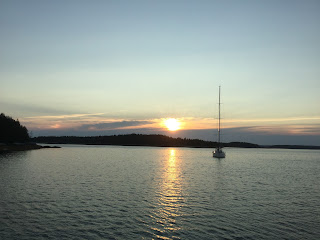 Another quiet night in this remote anchorage. 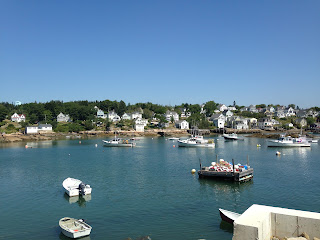 Since we never found trails to walk, we used Stonington as our place to walk for exercise.  This is another fisherman's harbor with little room for pleasure boats.  We read that the lobstermen from this area are not happy with pleasure boats in anchorages where they have traps and we experienced first hand how they speed around just to create uncomfortable wakes.  But we still loved our anchorage. 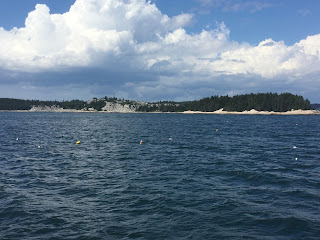 After a two night stay, we moved on to Seal Cove on the Island of Vinalhaven and passed this active granite stone quarry on Crotch Island.  A good deal of granite in famous buildings like the Washinton Monument and many art museums around the US comes from the islands in Maine.  Thus the name Stonington for the town we just left. 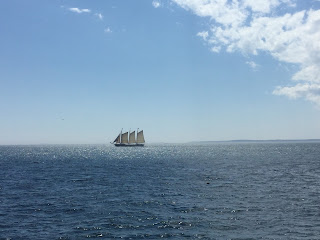 We have passed many of these sometimes old and sometimes new, made to look old schooners that are favorite cruising vacation destinations for tourists. 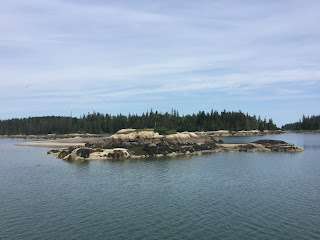 The trip to Seal Cove was dotted with rocky, evergreen covered islands.  It was interesting to watch the topography change with the 10 foot tides.  Saw some seals but never long enough for a picture. 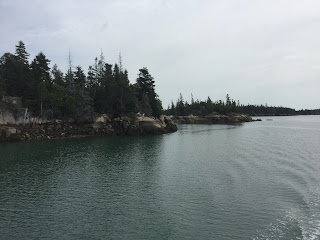 Lovely place to cruise through. 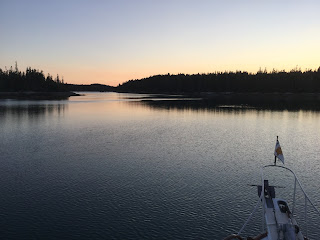 And another peaceful sunset in a fairly remote location. 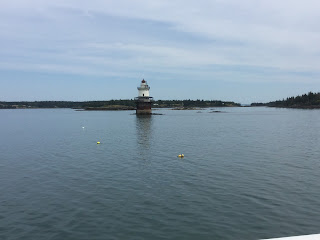 On Monday 8/14 we left Seal Cove and traversed the Fox Island Thorofare and passed this light fondly referred to as "Spark Plug".  This waterway runs between the islands of Vinalhaven and North Haven.  Both islands are in the middle of Penobscot Bay.  Our destination was Pulpit Harbor on North Haven.  We anchored in 25' at low tide and with a 10' tide, it meant we had to put out a long anchor rode. But that was accomplished and we took Victory Lap to a small dock to walk around the island. 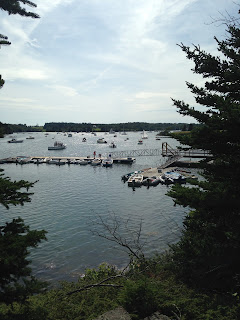 Pulpit Harbor slowly filled up with boats on moorings and many more anchored for the night.  There were no moorings for rent putting many boats on anchor in a relatively small area. 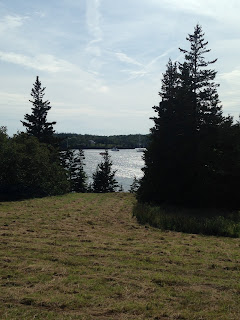 InSpeyered 2 sitting in the not yet crowded harbor. 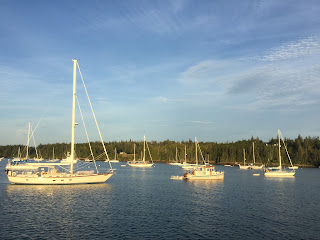 The space filled with all types of beautiful boats. 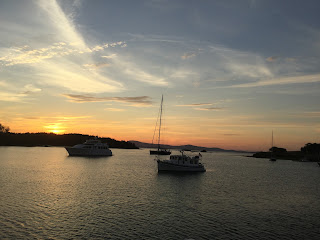 And we all enjoyed the sun setting over the Camden Hills off in the distance.  But we woke to dense fog in the morning.  Our plan was to traverse around 10 miles across the Penobscot Bay to a mooring at Lyman-Morse at Wayfarer Marina in Camden.  (Such a long name for a marina!)   We decided to make a try for it as the fog lifted slightly but it was a tense hour with eyes glued to the water watching for lobster traps and other boats in our path! 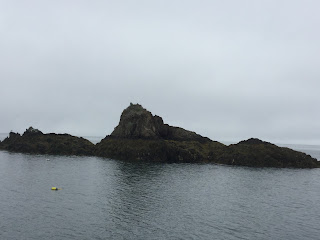 On the way out of Pulpit Harbor, we passed Pulpit rock with an Osprey nest reported to have been on that rock for the past 150 years!  It is a bleak picture because of the fog but a growing baby sits in the nest. 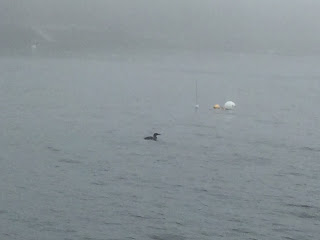 And while sitting in Camden Harbor in the fog, I spied a loon next to the boat.  Not a great picture but the only one I could get before he dove for a fish!  It was a quiet night in a dark harbor; but it was kinda cozy.  The next blog will start with our pleasant visit in Camden and travels beyond.   Island hopping is now over and soon we will be leaving the beautiful state of Maine.  Sad that summer time is slipping by and we must move on but looking forward to some of the travels ahead!