It feels like when we were kids and the end of August meant the end of summer fun but the beginning of a new school year in the next grade up and perhaps some new friends to meet.  So there are mixed feelings as we make our way south out of Maine but head to some new places to explore and more visits with friends and family.  The last post ended with us traversing the Penobscot Bay in dense fog.  I failed to mention the craziness of trying to locate our assigned mooring ball when we could barely see a few feet ahead.  But the dockmaster said to head to a particular sailboat and we actually found it but not our mooring.  So we had to call the launch to come find us and lead the way to our mooring which was not even close to the named sailboat. A bit of a faux pas for the dockmaster, oops! The fog never lifted on Tuesday 8/15 so we took the launch into Camden, got in some exercise and found a lovely place for a warm late lunch and later a warm shower in the nice marina head (aka bathroom). 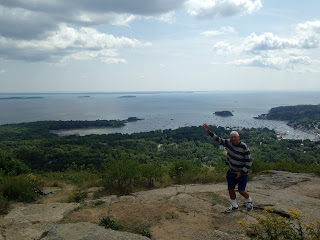 We woke to a beautiful, warm, sunny day on Wednesday, ready to explore the lovely town of Camden.  After a breakfast in the "best place" per Trip Advisor, we borrowed the courtesy car to grocery shop and on the way went up to Mt Battie.  Al insists on wearing the same shirt until it walks itself to the washer so his long sleeved shirt is not indicative as to how nicely the sun warmed up on that day!  We found a spectacular view of the large Camden harbor and the islands we passed the day before hoping to miss in the fog!!  In the far distance is Vinalhaven and North Haven the 2 islands we visited recently. 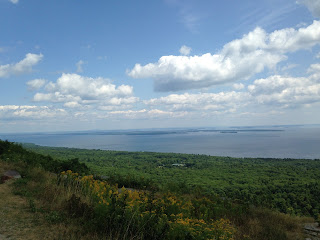 Then looking north up the Penobscot Bay we could see Islesboro where we visited almost a month ago.  The bay is calm and inviting. Our day included some exercise walking and a visit to a farmer's market where I found purple peppers for sale which, when roasted, tasted sweet like a red pepper. 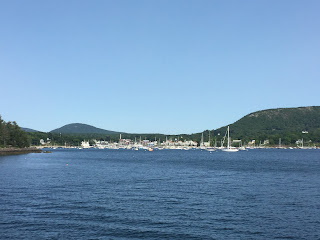 The weather continued to be lovely for our departure on Thursday and our cruise out of the harbor was smooth. 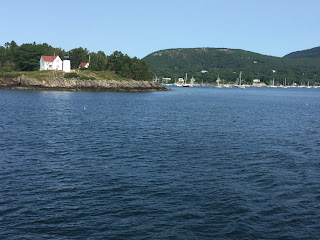 On the way out, we passed the Curtis Island Lighthouse and proceeded to turn south down the Bay and then turn southwest along the Maine Coast to Christmas Cove. 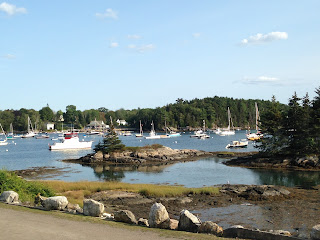 InSpeyered 2 is happy to float in Christmas Cove which is a location recommended by several other boaters.  This is a small harbor with a mix of pleasure craft and a few working lobster boats.  Walking  around South Bristol on Rutherford Island was a pleasure.  After looking at our "go to" weather sites we decided that wind and rain predicted for the next two days dictated that we head into the comfort of a marina and we chose Dolphin Marina in Harpswell, Maine based on many folks recommending it.  So we headed out on Friday 8/18 in overcast but calm conditions and the day progressed to chilly and rainy and then downright cold and rainy.  Tieing up was less than fun in a downpour but the dock guys were great.  No pictures of this stop.  But we lucked out and the hard rain stopped for a fairly comfortable Saturday to walk and also bike around Harpswell.  Two best parts for this visit; finding fresh blueberries grown in someone's back yard for sale and getting freshly made blueberry muffins and coffee delivered to the boat by dock hands on the two mornings we stayed at Dolphin. Worth the stop there for those muffins!  Then on Sunday, after our walk and a muffin, we headed further southwest to Biddeford Pool, a harbor we stopped at on the way up.  We had intended to go further that day but the wave action was uncomfortable so we agreed to stop early; but too late to get a  mooring so we dropped anchor in what would be our last stop in Maine. 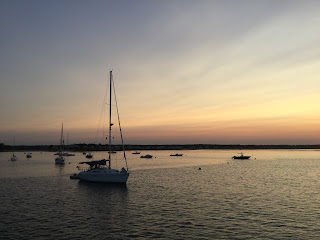 We enjoyed a lovely sunset over this calm harbor.  From Biddeford we headed down to the Portsmouth, NH area on "eclipse day".  We initially planned to take a mooring ball in Kittery but determined that all the harbors with moorings big enough for our size were in busy boating waterways and sure to give us a rolly afternoon and night.  So we splurged and stayed one night at the Wentworth marina and took advantage of their courtesy car for some errands. But we completely missed the eclipse with no where to really view it and confounded by the fact that it only reached 50-60% totality in New Hampshire. 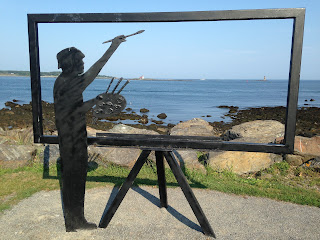 The walk away from The Wentworth took me to New Castle's Great Island Common, which is a large public park.  And I found this artistic sculpture just itching to be photographed! 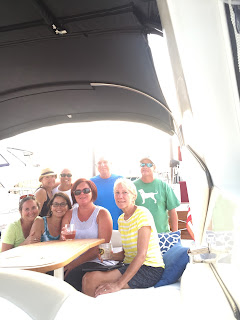 We had a fun docktail gathering with 4 couples vacationing together for the week.  They had been on a boat across the dock from us and gave us great accolades as they watched Al back into the slip with my firm directions about turning the stern to keep what's left of the swim platform intact!  They also had lots of questions about our adventure and were keen to tour our "live aboard boat".  Meeting them was a nice and unexpected benefit from picking the marina over a mooring ball. The next day, Tuesday, we moved further south to another repeat stop, Marblehead and tied up at the Municipal Dock. 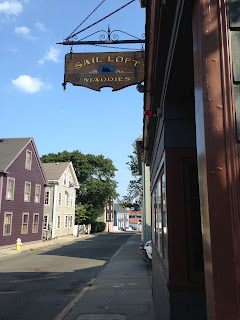 Marblehead does such a great job of preserving its historic homes and placing placards on each to identify when they were built and for whom they were built.  It is a fun place to walk the crooked streets and try to think about what it would have been like to live there in the mid 1800's.  We hit up the town market and found "Nuts Over Fish" by chance which is a delicious seasoning for fish that I had been searching for, so it was an added bonus to this stop over! 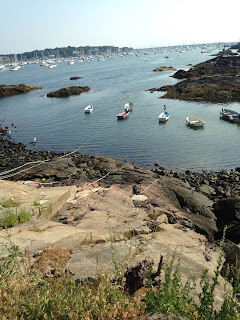 View of the harbor from Fort Sewall. 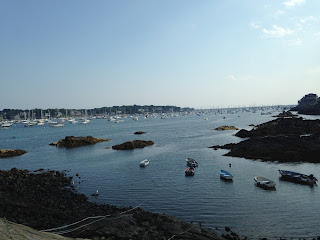 Another beautiful view of Marblehead 's harbor full of lobster boats and sailboats.  It is known as the sailing capitol of the world.  After a quiet night, we awoke to another beautiful morning so we used dock water to take some salt off the boat and walk for exercise around town and then cruise on to the waters that lead to Boston Harbor.  Our goal is to be in Boston by Friday to pick up guests for a weekend cruise.  My college roommate Lynn and her husband, Rich, live on the Cape and happily took us up on our offer to join our cruise from Boston through the Cape Cod Canal. So on Wednesday we had a short cruise to Boston Harbor Islands National Recreation Area to await their arrival. 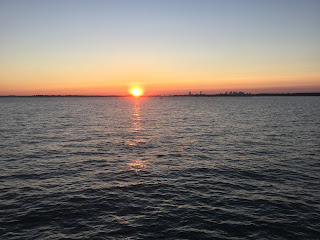 And we found a fairly calm place to anchor next to Peddocks Island with a view of the Boston skyline.  Previously when we stopped in Boston on the way north, we went through this area in misty and rainy conditions so could not appreciate how lovely the islands are outside of Boston Harbor. 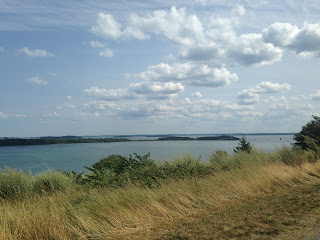 On Thursday we took Victory Lap over to Spectacle Island which had a dock where we could tie up and walk around the island.  We learned it was used for processing dead horses back in the 1800's since so many horses died in Boston with no place to bury them.  They had a factory of sorts that culled horse hair, bones, fat etc. to make functional use of the remains.  The topography of the island changed with higher hills created by buried debris.  So besides horse remains, Boston's garbage made its way to this island.  How interesting is that? 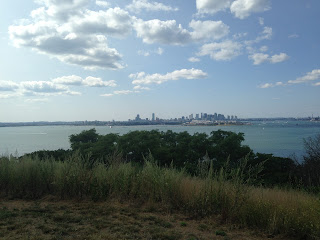 So here I stand on a hill made from garbage and dead horse remains to view the Boston skyline. 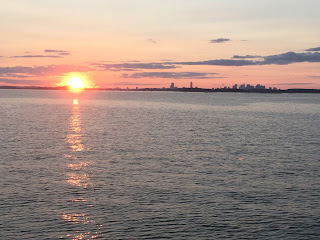 This was our second night on anchor, Thursday 8/24, viewing the sunset over the Boston skyline.  Not a bad view at all!!  And what a cool opportunity to see the "other side of Boston"! This  adventure and our new experiences continue.