There has been a delay in posting this blog by about a week due to malfunction of the iPad keyboard and then lack of time.  Just too busy enjoying the cruising life!!  Back on the Cape, we grappled with balancing weather and wave conditions in Buzzards Bay and Block Island Sound with our desire to visit some places along the Rhode Island and Connecticut coast and guess what won out?  The weather and wave reports.  So we decided that on Saturday 9/2 we would travel the entire 102 miles from Kingman Marina to Shelter Island because we had a one day window before wind would greatly pick up and waves grew to heights of 3'-5' and later in the week to 5'-8'.  Go figure how waves could get that large so close to shore and not in the actual wide open Atlantic.  But we have to believe the predictions and not get ourselves into uncomfortable conditions.  We headed out at 7am (about when we get up to use the head and go back to sleep!) and arrived at Shelter at 5:30.  Our longest day so far! But as the week progressed with windy conditions, we were glad we made the right call.  Our reason to get to Shelter by the weekend of 9/8-9/10 was this: 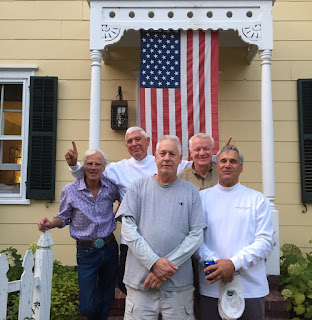 A reunion of long time friends who also happen to be slightly "old"!!   Al went to elementary school with some of them and they were all friends through high school.  Not all the guys could make it and we specifically missed our buddy Dean and his great wife Diana.  Dean was the guy who was first mate to Erik in 2012 when InSpeyered 2 made her voyage from Florida to home in Tennessee.  But we had lots of fun over the weekend trying to remember old times!  We scored a mooring for the 8 nights in Dering Harbor through my long time best friend, Megan whose husband is the guy in the middle of the "guy picture". 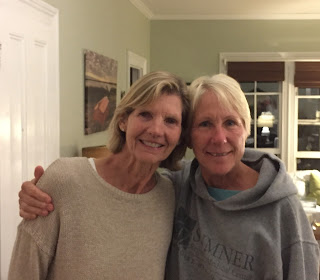 Megan and I go back to 5th grade!  She has spent every summer of her life on Shelter Island and I enjoyed visits while she was there so Shelter is a special place for us. 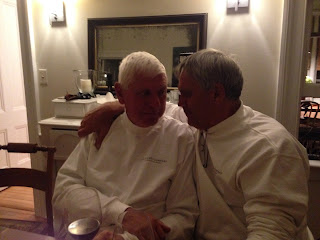 Nick has some sage advice for his old pal Al as we finished up a great dinner around Meg and Charlie's dining room table.  His Italian instensity is captured in this picture! 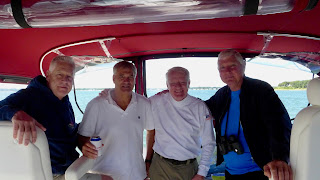 On Saturday we took the group for a lunch cruise around the Island.  Al loves to show off his boat and demonstrate the electronics to anyone who will pay attention! 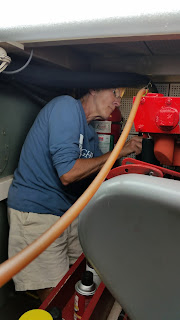 Since we had a whole week to hang out and wait for the reunion to begin, we got caught up on boat chores and I added working on the generator to my growing list of first mate skills! 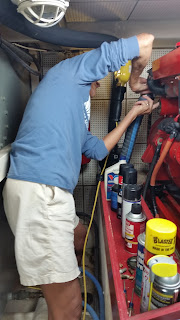 My small stature allows me to climb to the back of the engine room to work an old zinc out and replace it with a fresh one.  Of course I was under strict observation and orders from the Captain! 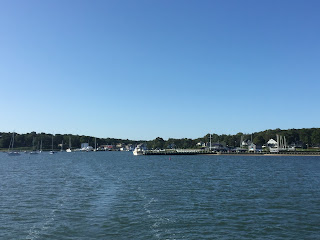 So the week was spent partly enjoying time with Meg and Charlie's family over Labor Day weekend and then more quiet time walking the Island and spending time with Megan.  It was a lovely week.  Above is our view of the Shelter Island Yacht Club and Dering Harbor as we left Sunday morning 9/10. 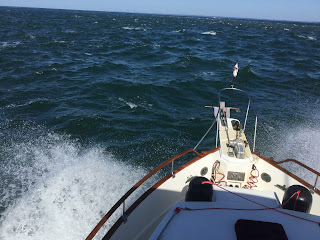 Going through Plum Gut, a relatively narrow cut out to Long Island Sound, was met by a "confused" sea.  This happens when the wind blows one way and the strong current runs the other and the water doesn't know which way to go!  (My non scientific version of this condition). But InSpeyered plowed through without a problem and we encountered a calm Long Island Sound for a rather boring 8 hour cruise the 78 miles to Huntinton Bay to find our anchorage off Sand City. 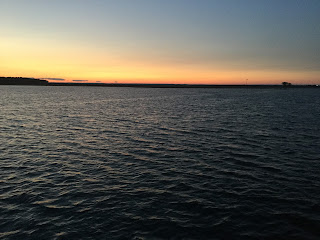 Sunset Sunday night just off the Long Island Sound.  In planning the trip down the East River from Long Island Sound to New York Harbor, we had to check several things out including the security closings of the river in the area of the United Nations because the General Session begins mid September and there are all kinds of restrictions when all the dignitaries are present.  In making the phone call to the Coast Guard we realized quite suddenly that the day we would make the trip was Monday 9/11.  Yup the real 9/11 and we were heading to New York!!  If we had tried to plan that, it wouldn't have worked; it was just pure coincidence.  The next posting will document our trip through NYC on such a poignant day.  In the mean time, as we passed the week on Shelter, we closely watched Irma and worried about Erik who now lives in Ft. Lauderdale.  Since we went through Matthew last year, we could feel his anxiety in the decision making process.  And Sunday night we received this picture and had instant relief that he had ridden out the storm in safety! 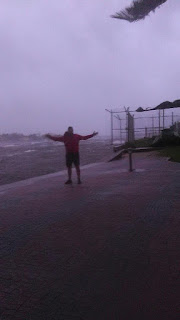 Erik under a bridge on the ICW in Ft. Lauderdale celebrating that the storm was moving on and he could finally get out of the dark, shuttered house where he stayed that weekend.  Freedom for Erik!