Our Longer Than Expected Visit to the Everglades!

So we continued to slowly head north with very annoying winds.  We anchored Friday 2/19 in Little Shark River but only saw dolphins and mosquitos galore!  We then moved on up into Russell Pass which is off the Gulf and is part of 10,000 Islands in Everglades National Park.  One island (or key as they are named) after another, each covered in dense mangrove trees and we assumed gators in the fresh water area and crocs in the salty water area.  But we saw neither, only lots of water birds. 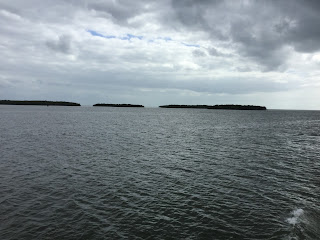 This is what we saw as we entered Indian Pass to get up to an anchorage. 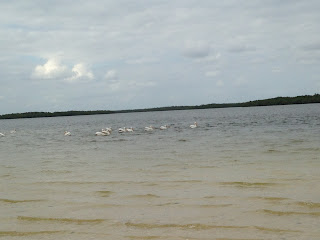 A typical scene as the white Pelicans gather to float. 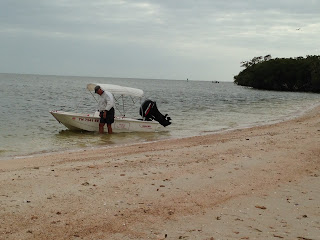 Another dingy ride to find a beach to walk for exercise and exploration.  We encountered a group of college kids camping on this Key with kayaks.  We thought they were cool to take such a fun trip and they thought we were cool to be living on a boat.  When the mosquitos swarmed at sunset, I decided we were the lucky ones and then when it poured rain in the morning I knew we were! 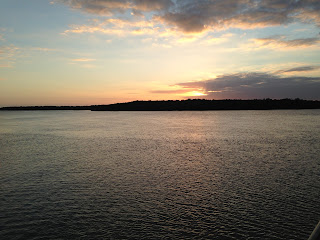 Another glorious sunset, one of many for the 6 nights we ended up staying on anchor tucked between mangrove keys that blocked the 20 knot winds we were avoiding.  We were a 20 min dinghy ride to access Everglades City which had tacky but passable waterfront restaurants, a tiny grocery store used to augment our lower supply of food and plenty of streets to walk for our daily exercise.  Plus we could access Verizon service when we went ashore so could let people know where we had landed. 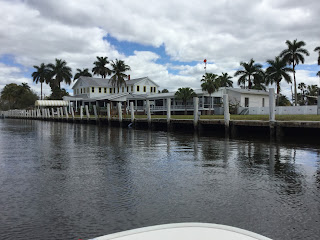 This is the Rod and Gun Club, an old established camp and restaurant that is famous for its use by Presidents and other important  men of history as a getaway to hunt and fish. 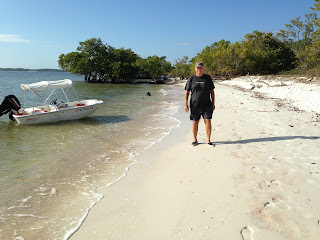 We had an endless supply of small beaches to explore and find unique shells to add to our growing collection. 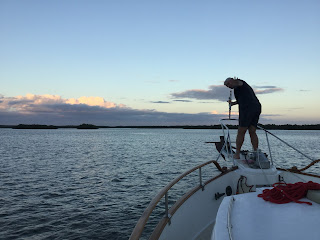 Al is furling our looper burgee to keep it quiet in the strong wind!  His balance is quite good these days so climbing on the bow pulpit is an easy task for my ol' Captain. 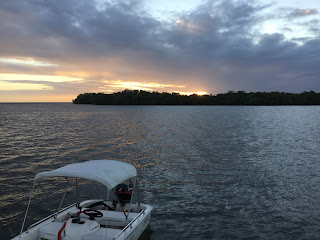 One more beautiful sunset to end this saga of anchoring in the Everglades.  Now on to civilization and Marco Island to restock our larder, catch up on laundry and maybe even find another beach!