A quick Catch Up Because Tomorrow We Head Up the East River!

When I reviewed the last posting I remembered that we met up with a very interesting man in Delaware City and I forgot to include pictures and his story.  The reason I forgot is that we actually took no pictures of his rowing skiff but I borrowed these photos from Carey on Tug LeeLoo. 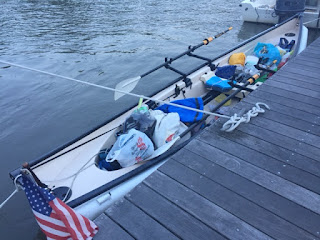 On Monday, 6/19 we walked along the dock heading to our nightly review of the conditions on the Delaware Bay and we found this packed rowing skiff and wondered immediately about the person who brought her in.  At the meeting we met Jim Brassord and later learned he has been rowing this vulnerable boat all the way from Miami.  So we invited him to join us for docktails on Tug LeeLoo and were instantly riveted by his story.  He has traversed the same waters as we have in a shorter time and using just his own muscle! 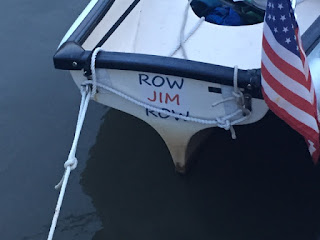 How inspiring to meet a man over 50 something who has the stamina to row all the way through so many states to raise awareness and funds for a new health center in his hometown of Amherst, MA!  And we thought we were on the ultimate adventure!  It was humbling to meet Jim and learn about his trip. A most inspiring docktail time was had by all. 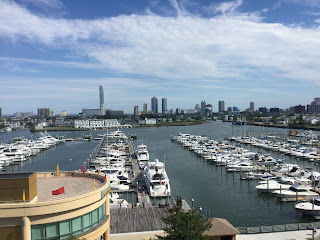 And then the rest of the story... we did go to the pool at the Golden Nugget in Atlantic City Sunday afternoon and had this glorious view of the marina where InSpeyered 2 sits in the middle pier in this picture.  Perhaps if the picture is enlarged, our burgundy canvas stands out a bit to find our "home". 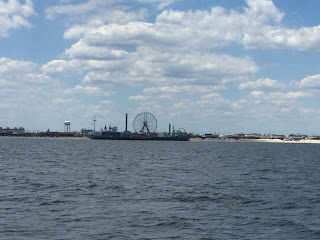 Then on Monday (yesterday), we headed into the Atlantic and cruised north along the Jersey shore in light wind and waves for a very comfortable cruise to the Manasquan Inlet. My first date was to this part of the Jersey shore at Seaside Heights but alas hurricane Sandy stole the primo roller coaster that used to be the focus of this very same view.  Manasquan Inlet lead us to Hoffman's Marina and a horrendous current situation as we tried to dock. 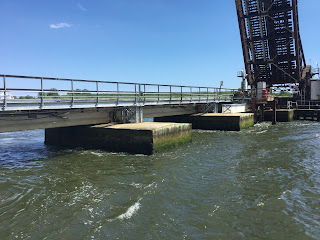 The water was swirling and the dock hands just hollered for us to "let the current push us to the T-dock" but that was not what the current did.  Instead, the current took us to the opposite shore and in the process of trying to get across the water, we go turned around and began heading directly into the railroad bridge. So Captain Al used his well honed instincts and basically saved us from a catastrophic crash into the bridge by gunning the engines into reverse and plowing the swim platform into the dock.  In a flurry of activity, lines were thrown, and we were pinned into our T-dock with the guys hollering "what a save Captain" while I looked down at this in shock! 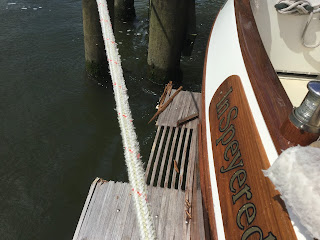 The crunch against the dock still rings in my ears and the vision is not a good memory; but I never saw what Al saw as he faced being pushed directly into the bridge.  He saved our boat and we are completely unharmed!  So we had a  quiet night and enjoyed docktails with the local harbor hosts, Pat and George Hospodar who have been long time loopers.  We continue to make lemonade out of lemons and we will not look back!  So today, we had another nice cruising day and crossed into New York State and are safely on a mooring ball at Great Kills Yacht Club on Staten Island and we have real New York cannolies for desert tonight! 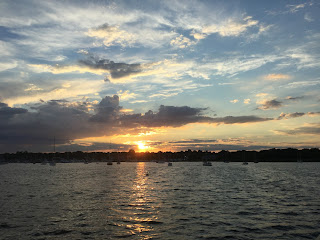 Another peaceful night swinging in a calm harbor.  Tomorrow we start our adventure around New York City and on to Long Island Sound, Al's old boating waters.  We start another significant part of this adventure!